Block Club Chicago is the Next DNAinfo

Block Club Chicago is the Next DNAinfo

Last November, Chicago’s online local news source DNAinfo  — along with The Gothamist in New York  — abruptly shut down following speculation of reporters’ attempts to unionize. At 4 p.m. the site was there. By 5, DNAinfo no longer existed.

In place of the publication’s homepage was simply a note from Joe Ricketts, the sites’ billionare owner, reading:

“Today I’ve made the difficult decision to discontinue publishing DNAinfo and Gothamist.” 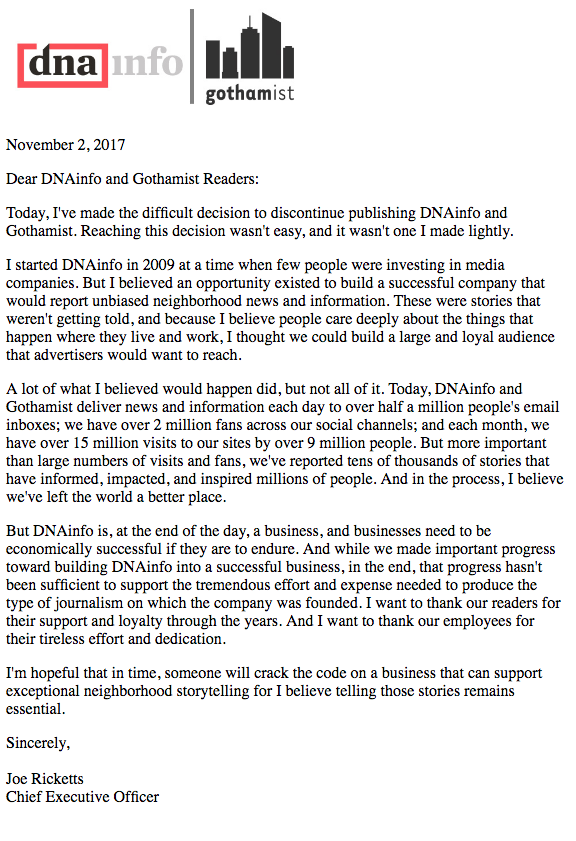 Where had all coverage gone, the hours spent reporting? What would happen to the 60-plus journalists who once scoured Chicago neighborhoods like silent vigilantes? How could other news organizations compete with  — and now work to complete  — that type of hyper-specific coverage?

This past Tuesday, Block Club launched a GoFundMe page, calling on the Chicago community to help support local journalism.

“I think us as a nonprofit organization, we are coming out and saying, ‘Listen, all of this money is going to go back into the reporting,'” said Sabella.

Within an hour of the page being created, the organization exceeded its initial $25,000 goal. Twenty-four hours, later the group was over $100,000, enough to hire another full-time reporter. As of Friday morning, the group had raised over $125,000.

“We knew that the city missed their neighborhood news coverage but we didn’t anticipate this kind of outpouring of support,” said Sabella. “It’s just a kick in the butt to keep going.”

The Block Club Chicago staff will also feature five full-time reporters, including DNAinfo reporters Mina Bloom and Alisa Hauser, with a sixth on the way after reaching their $100,000 mark.

Perhaps what is most surprising, though, is the representation of backers. The GoFundMe page has received donations from over 2,000 and counting, with Chicagoans showing their support for a community-based reporting revival.

Contributing gifts help seal the deal, too. Block Club offers a free tote bag with $25 donations, one-year subscription and tote bag for $50, and $100 donations including all that plus additional membership benefits. According to O’Keefe, her $50 donation was a worth it in the long run, with a year-long subscription costing less than $5 a month. The tote bag is always a nice bonus.

These numbers support an increasing trend in local media  — according to an investigation by The Public Newsroom and City Bureau, citizens are more willing to donate to free websites rather than pay to access news. The study also found that “Chicago residents have markedly different experiences with news media depending on where they live,” with North/Downtown residents having a more positive experience with media than South and West Sides.

“One thing we would like to do better is coverage of some neighborhoods we kind of neglected at DNA[info],” said Sabella. “We want to get a better representation on the West Side for example which we did not cover basically at all at DNA[info].”

The fundraiser is only on day three, with the offcial GoFundMe page set to close March 8. Block Club Chicago is currently set to be up and running by April, bringing back the transparency that neighborhood-based beats makes possible.

“Every dollar that we get we will hire more people and cover more of the city,” said Sabella. “We just want to cover Chicago really, really well.”