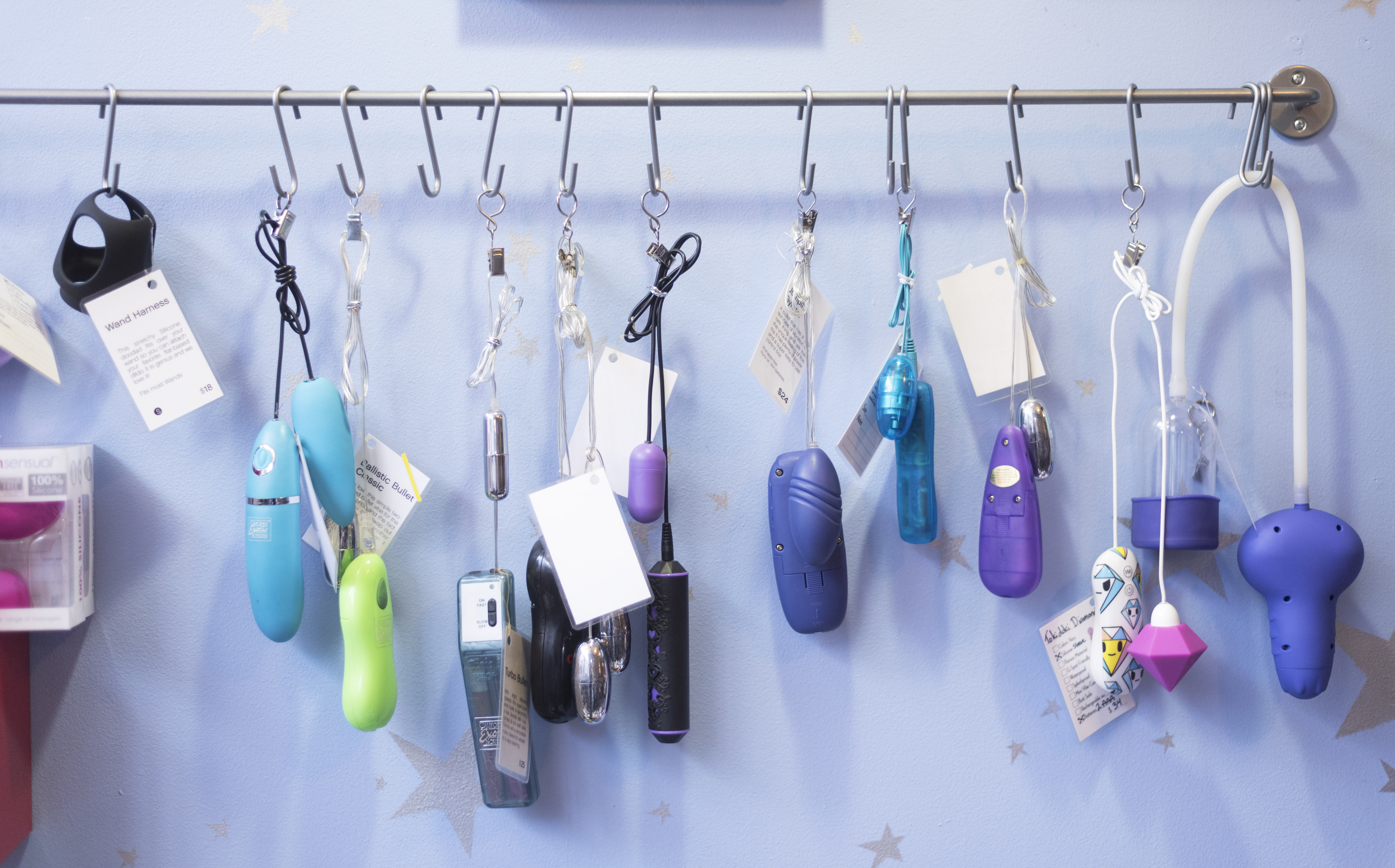 A Celebration of Self Love in Chicago’s Sex Shops.

February is a bustling time for the sex industry. When most retail dies in the post-Christmas winter months, sex shops find their footing during Valentine’s Day. Anxious couples go to sex shops for the first time, or get each other toys and lube to accompany their bouquets and chocolate hearts. But with Valentine’s Day comes a lot of baggage — especially for those without partners. During this busy season, Chicago’s ever-evolving sex shop scene is trying to emphasize love and pleasure in all of its facets: sexual, romantic, platonic and individual.

Taboo Tabou: Femininity for Everyone 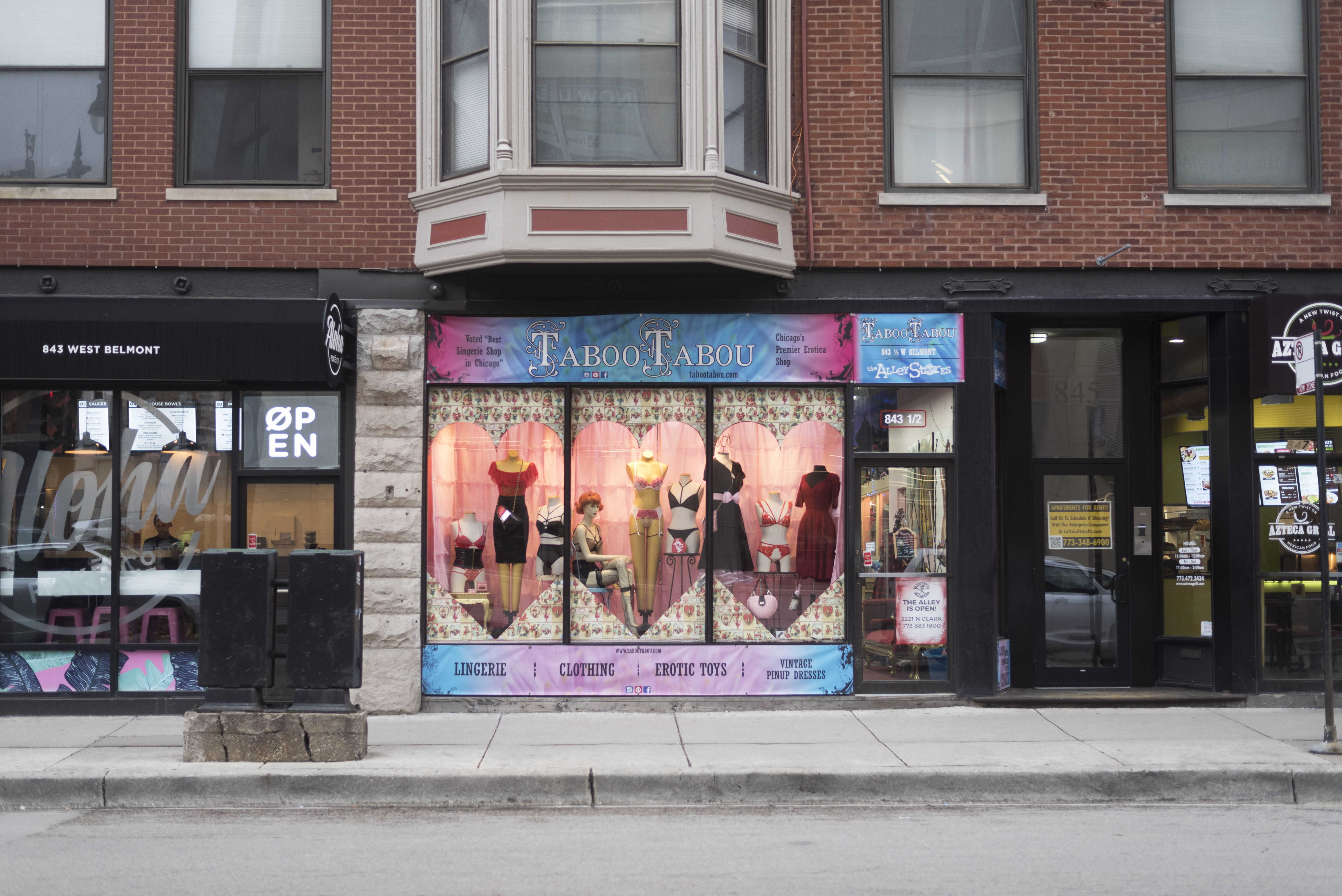 Taboo Tabou’s pink storefront stands out on an otherwise dark strip of Belmont Avenue in Lakeview. Alexis Thomas, the owner, changes the mannequins in the heart covered windows in anticipation for Valentine’s Day as ‘Lady Marmalade’ blasts through the speakers. Thomas is eccentric and perks up with a welcoming “Hi!” whenever someone walks into the store.

Thomas’ parents started Taboo as a condom shop in the early ’90s. Lakeview was considered the center of the HIV epidemic in Chicago, and Taboo served the vulnerable population with external condoms, internal condoms and dental dams as a part of the historic counterculture store The Alley.

Thomas took over Taboo in 2015 and subsequently moved across the street to their current home at 843 W. Belmont Ave. Taboo’s purpose shifted along with it to serve the ever-changing needs of the community “It kind of changed and became more about the lifestyle of being a badass b––h.”

To Thomas, that means making sure femininity is accessible to everyone. Taboo carries sizes that range from XS to 5XL to ensure that anyone who wants to explore “pleasure and positivity” can do so in a welcoming environment.

Taboo’s regular customers, or “Taboo Girls,” are described as part Barbie and part Elvira, and the shop reflects that. The store is proudly pink and traditionally “girly,” while also displaying PVC, or polyvinyl, material, leather and ball gags. “Our black witchy look is big for us,” said Thomas. “It’s also a little bit of an ode to our roots because it connects us back to The Alley.” 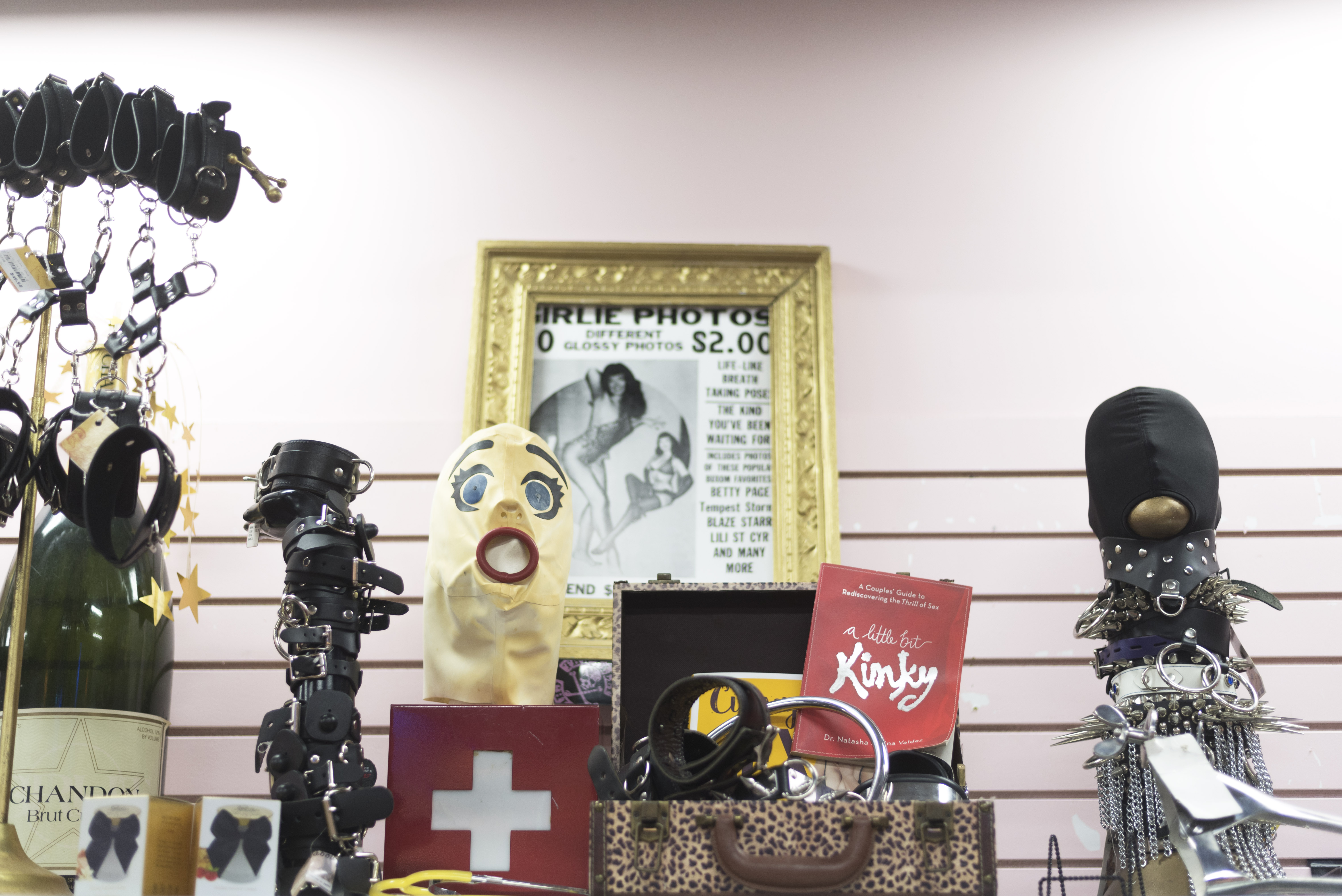 As Taboo gears up for Valentine’s Day, they are putting a focus on self care and platonic love. They hosted a “Galentine’s Day” inspired BFF speed dating event and are offering sales throughout the season.

While the commercialization of Valentine’s Day is focused on partnership, especially in the sex industry, Taboo is trying to use the holiday as an outlet for self care.

“I think this time of the year gives everyone permission to splurge on themselves because they think they’re splurging on someone else,” said Thomas.

When Taboo in its current form opened in 2015, people were confused and even hostile because it didn’t reflect the typical sex shop. “Women and men would get so angry that it was so feminine,” said Thomas. “They get uncomfortable that it’s exploring femininity and all aspects of it.”

Now, Thomas has seen a change in attitude. Taboo exists for those who didn’t find comfort or positivity in sex shops, and the quirks that originally confused patrons are now what sets them apart for the better.

“I feel like before people had this very concrete idea that sex shops were supposed to be lesbian sex shops, gay male sex shops, here’s the couples sex shop. And sex shops are definitely marketed like that, but I feel like we’re pushing the boundary because even though we’re feminine and pink, we’re not ashamed of it.”

Early to Bed: Pleasure in Activism 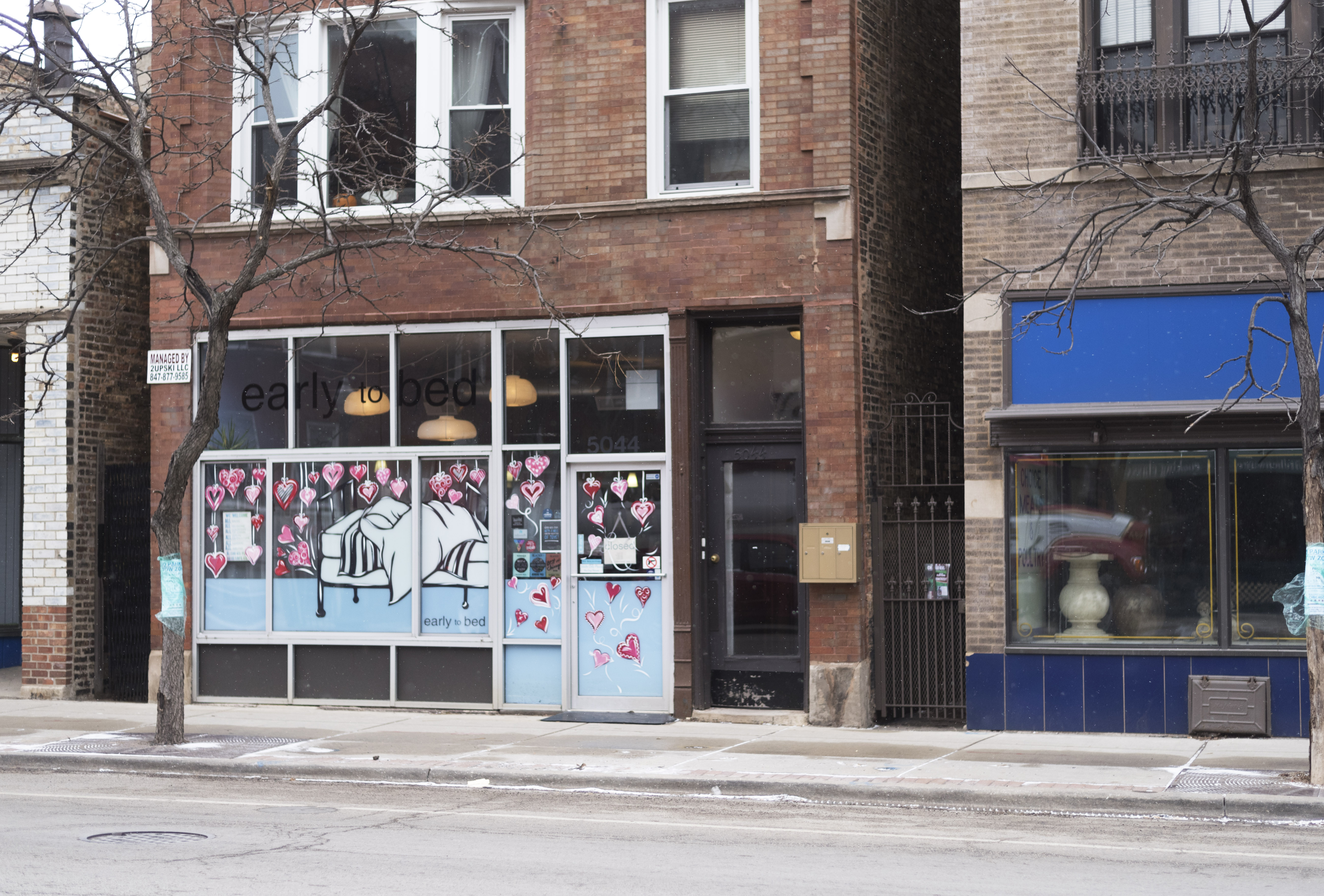 EtB’s feminist label is important to Deysach because her personal politics help shape how she runs her business. She doesn’t sell toys made of unsafe materials like jelly and tries to make the shop as much of a community space as it is a for-profit business. Because of this, EtB often helps facilitate community outreach and donates proceeds to local organizations like Chicago Women’s Health Center.

Deysach runs two websites in addition to EtB that have grown out of needs from the transgender community. FtM Essentials provides binders, packers and other gender expression gear for transmasculine or otherwise interested individuals. TransKids offers gender-affirming products for transgender youth aged 13 and under.

“It’s hard to access gender expression gear if you’re not going through sex toy store channels. I feel like that’s a little bit weird especially for younger folks who don’t need to be exposed to or have conversations about butt plugs when all they need is a binder.”

Interactivity and education are what set EtB apart from other sex shops. Instead of being behind a case or in packaging, many of EtB’s products are open to feel and compare — which wasn’t the case for other sex shops when EtB first opened. In the 17 years since EtB opened its doors, Deysach has seen a shift not just in sex in mainstream popularity, but in the industry as a whole.

“It’s changed a lot in a lot of ways and in a lot of ways it’s still the same white-guy-fueled industry. The acknowledgement that women are consumers of these products has made a lot of changes in terms of packaging and quality,” Deysach said. “I think more people who are women and feminist and radical sex-loving people getting involved in the industry has changed it as far as safety is concerned.” 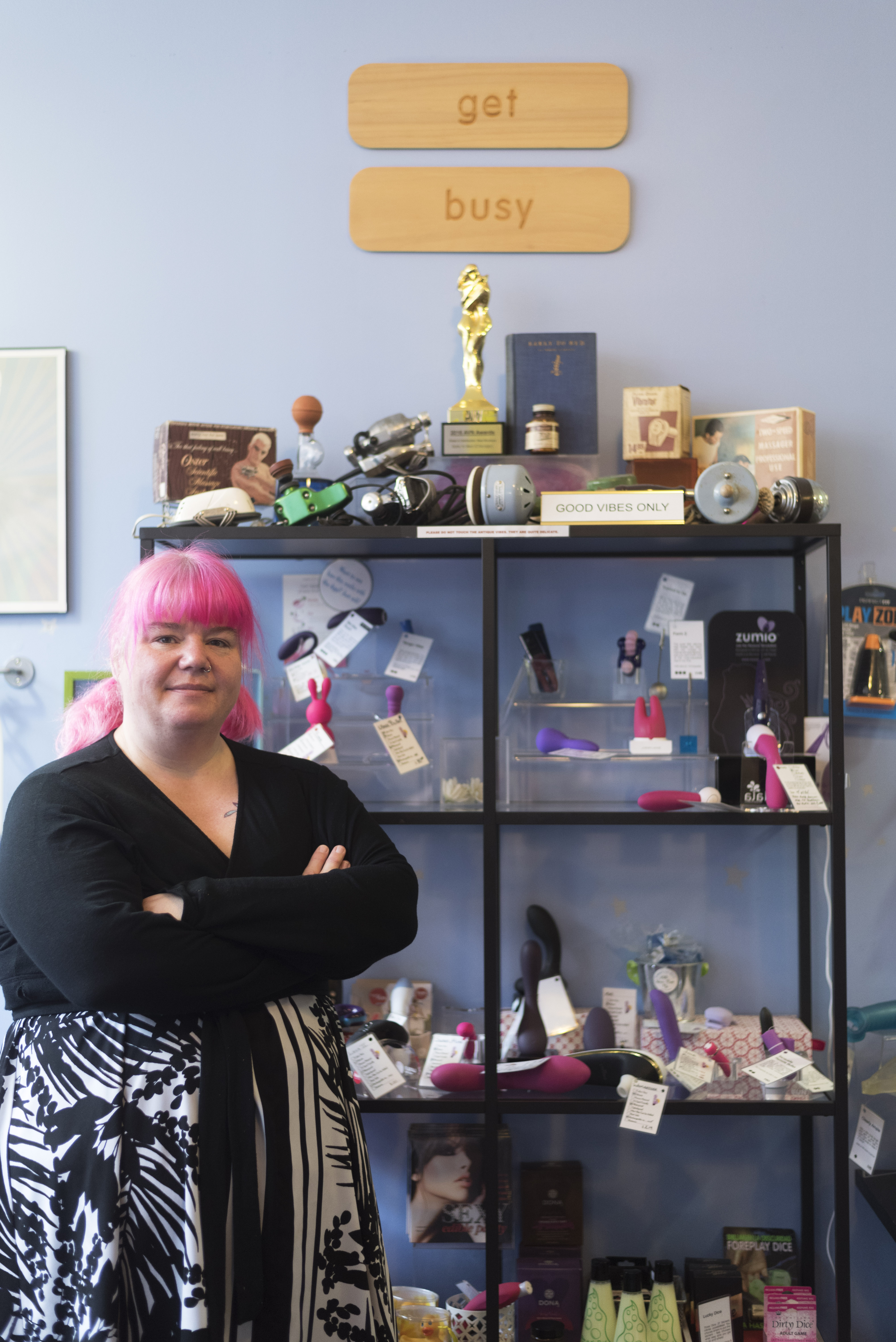 For EtB, Valentine’s Day is like Christmas. “Except people plan less far in advance,” Deysach quipped. For many couples, Valentine’s Day is a time to take risks; it may be the first time they go to a sex shop together or buy a toy for their partner. Deysach acknowledges that Valentine’s Day can be stressful and loaded, especially for those not in relationships.

“I think if you’re a flower store or a candy store it doesn’t behove you to focus on [relationships],” said Deysach. “But as a sex toy store I think we have a moral obligation to not eliminate people who aren’t in partnerships and to not shame them. I try to make it a happy time even though it can be fraught for a lot of people, so we try to remind people that they are their own best lovers and that taking time for yourself is also a really good thing.”

Deysach is constantly curious. She looks for what’s next in toy innovation, both in terms of technology and inclusion, and cannot contain her excitement for what’s in store for the industry. 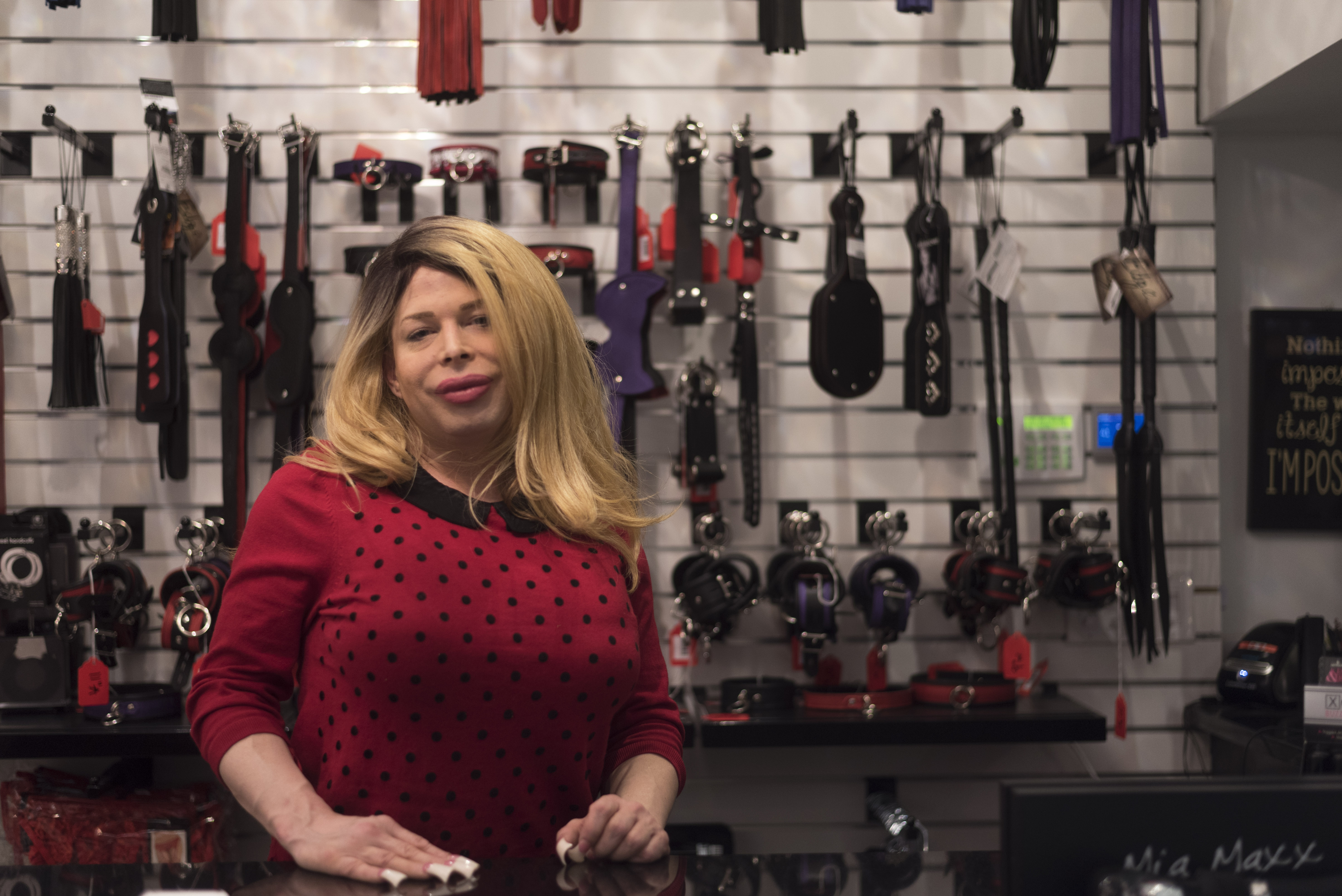 Foreplay Chicago is the new kid on the block, opening their doors in January at 1804 W. Addison St. in North Center. But Jamesey Tompkins, Foreplay’s owner, is no newbie to the industry. Tompkins has worked in sex shops for most of her life, and worked in the industry as a distributor until she was fired for being a transgender woman in 2016. She called two of her clients from her previous job in May 2017 and worked together to open up a store of her own.

From the outside, Foreplay is a mystery tucked under the Addison Brown Line — the windows are blacked out, with just their logo and an open sign visible. Foreplay’s atmosphere inside is what makes it North Center’s best-kept secret. The shop maintains a classic beauty: chandeliers hang from the ceiling, a crackling fireplace video streams on a monitor and luxurious sex toys are on display.

“We tried to make it as beautiful and inviting as possible because traditionally there’s bad mojo about sex shops,” said Tompkins.

Tompkins has seen a drastic change in the industry over the years as women became involved as consumers and collaborators. “It [was] no place that any woman would want to go to or feel comfortable going to. I’m sure there were women customers but it was a seedy place to go and no one felt safe or comfortable…In the last 10 years the stores have all geared toward women and making women feel comfortable in the store.”

As sex positivity becomes mainstream, even in pop culture phenomenons like “Fifty Shades of Grey,” Tompkins is determined to make sex and kink as welcoming and accessible as possible. “In the last two or three years, anal has really taken off and that’s been after “Fifty Shades of Grey,” said Tompkins. “‘Fifty Shades of Grey’” was a lot of kegel balls and people who wanted to get a whip and experience being tied up and all those sorts of things.” Now all types of people can engage in healthy, informative conversations about sex when it was previously seen as forbidden or taboo. 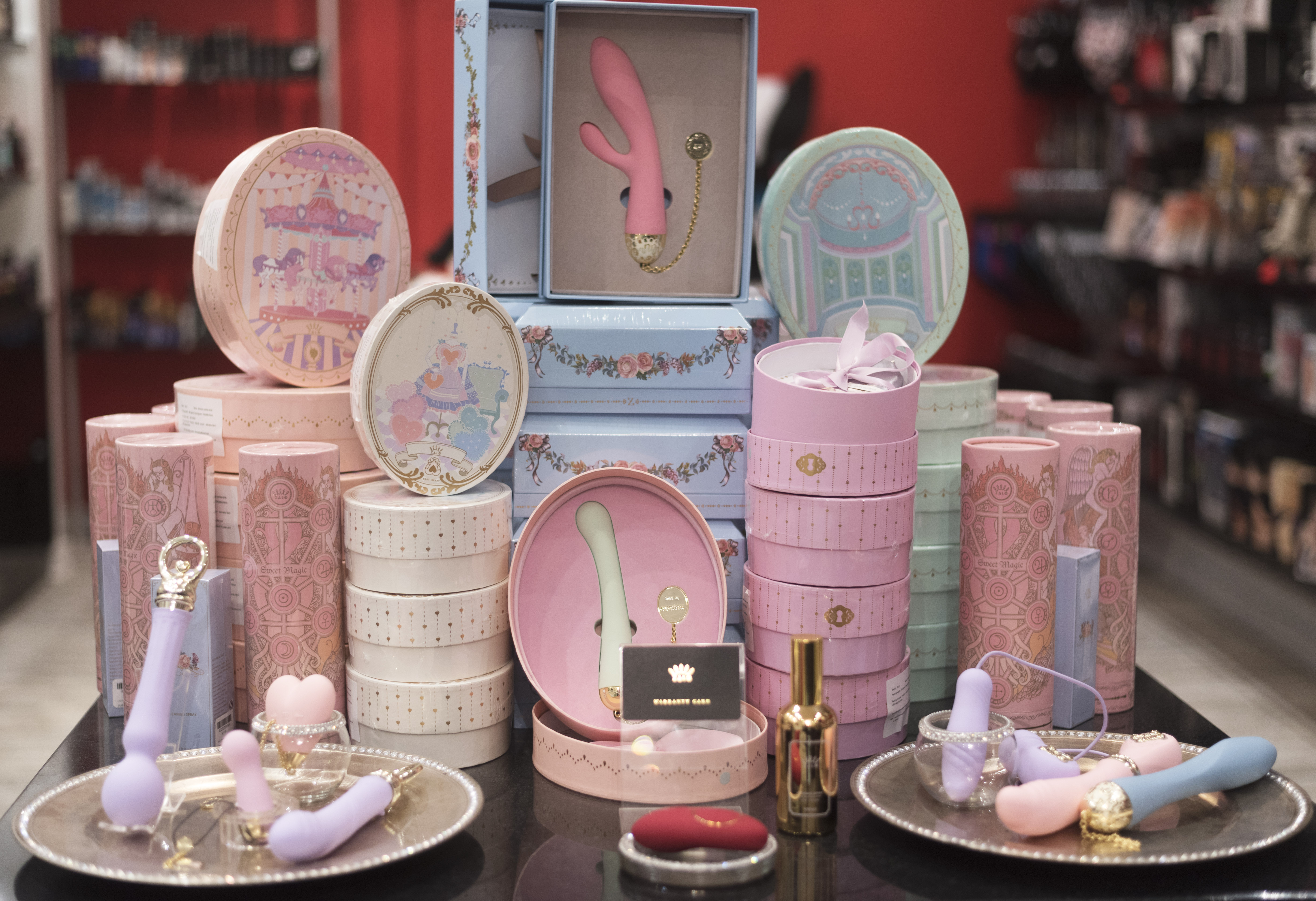 Valentine’s Day is an exciting and busy time for business, especially because this is Foreplay’s first. For most retail businesses, there is a significant lull after Christmas. For the sex industry, Valentine’s Day gives them a huge boost in an otherwise difficult time for local businesses. “It’s usually first or second largest month of retail for adult stores,” said Tompkins. “Halloween sometimes beats out Valentine’s Day.”

Along with running sales throughout the season, Tompkins is excited to help people experience pleasure in all of its forms — from new couples trying to shake things up, to more experienced lovers to people wanting to get in touch with themselves.

“If you’re in an established relationship, an item [from a sex shop] can add a difference. You don’t want to eat the same cereal every day so having something different in the bedroom helps and it kind of takes everyone’s mind off of it if you have an inanimate item there that you don’t have to get jealous about.”

Tompkins is passionate about the industry she’s worked so much of her life in. She’s seen it change from a seedy, male-dominated space for money laundering and crime into a celebration of sex positivity and authenticity for everyone. 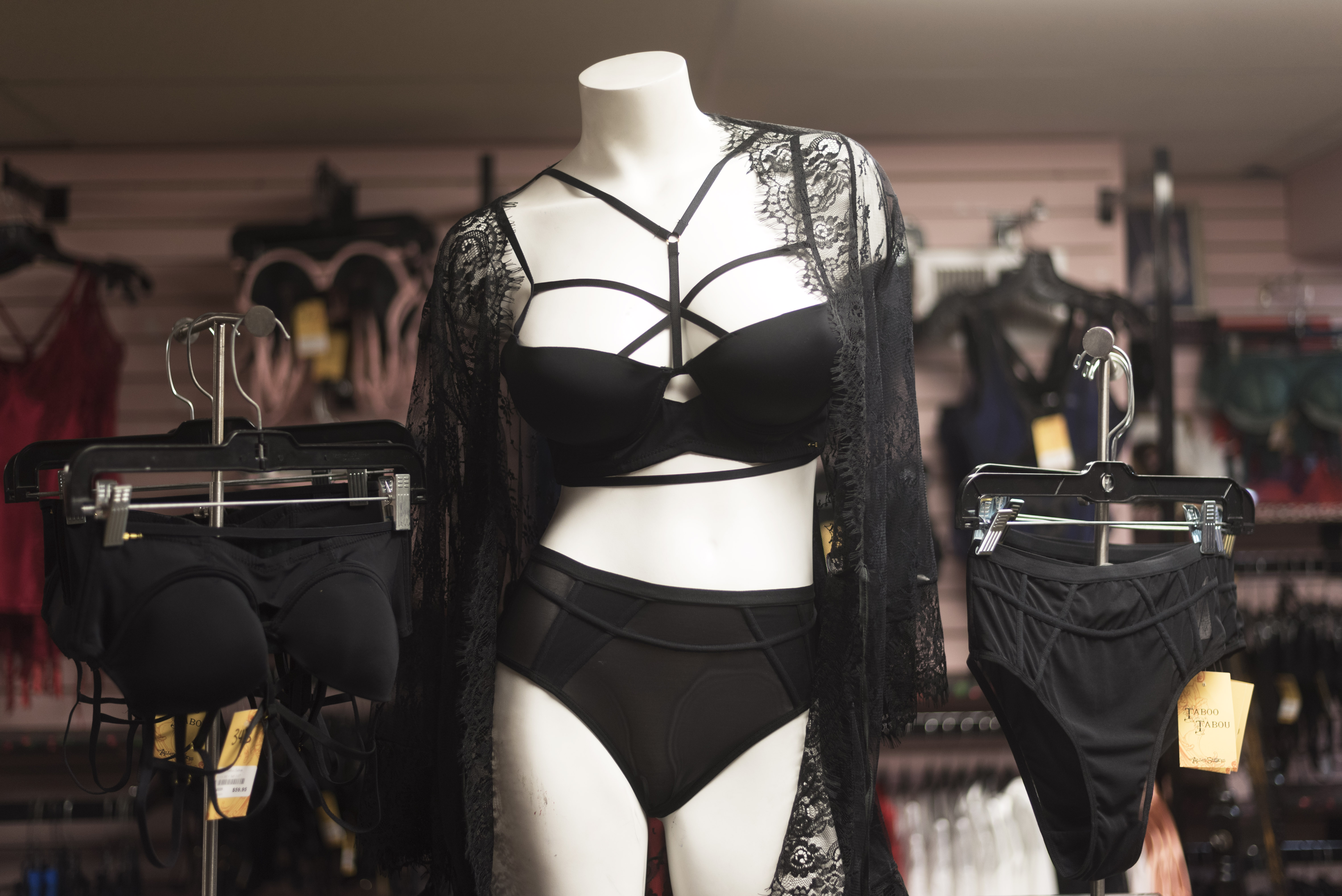 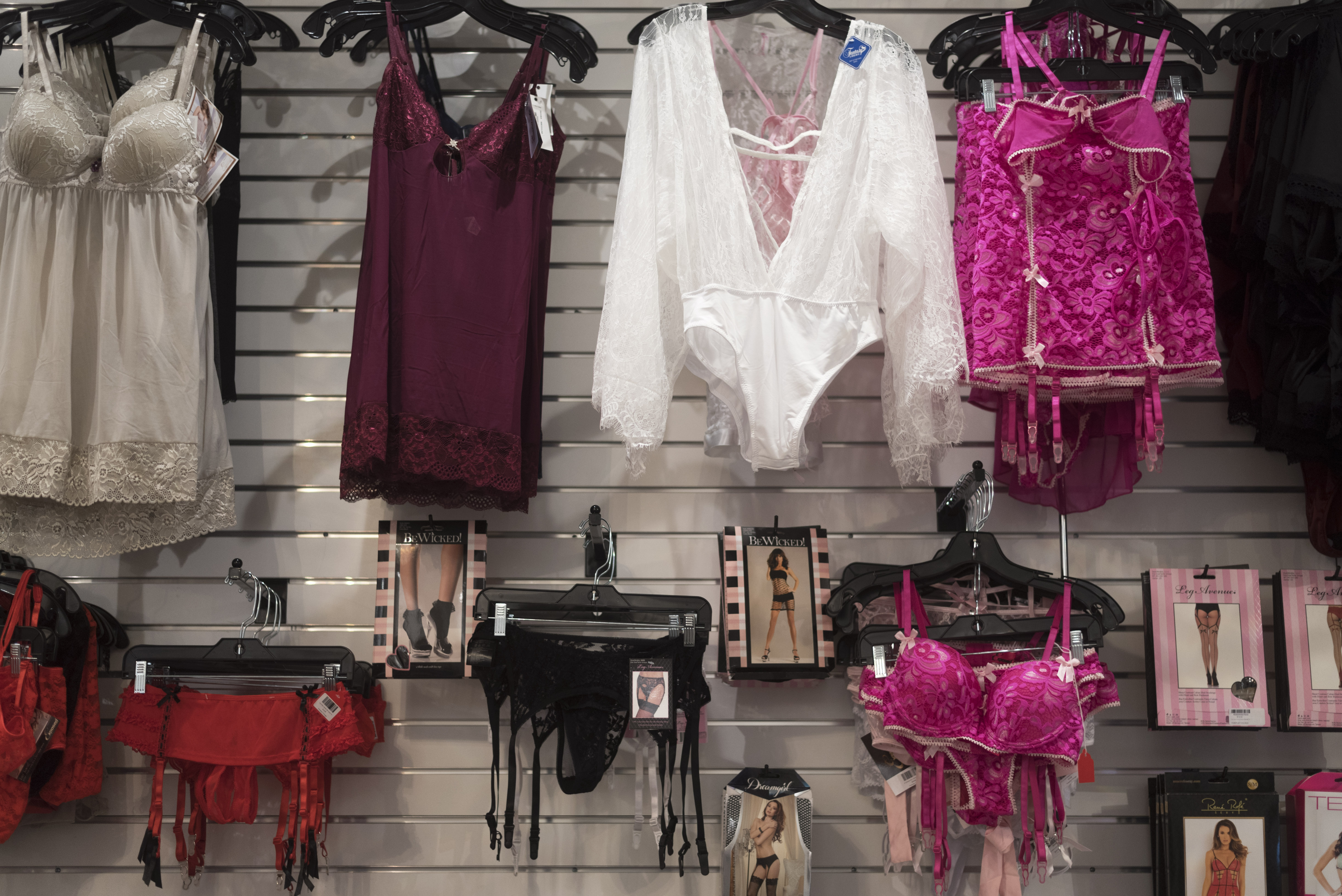 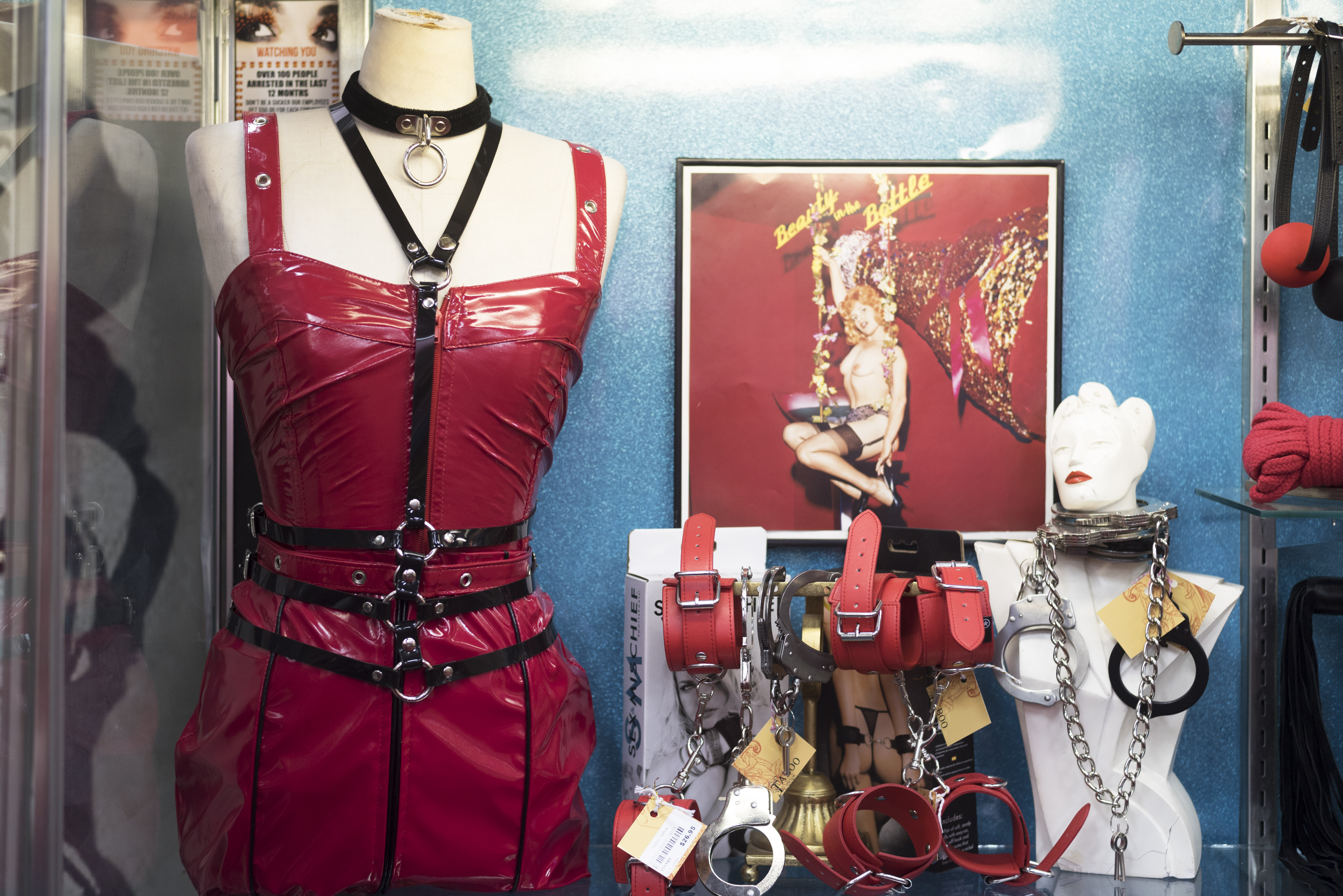 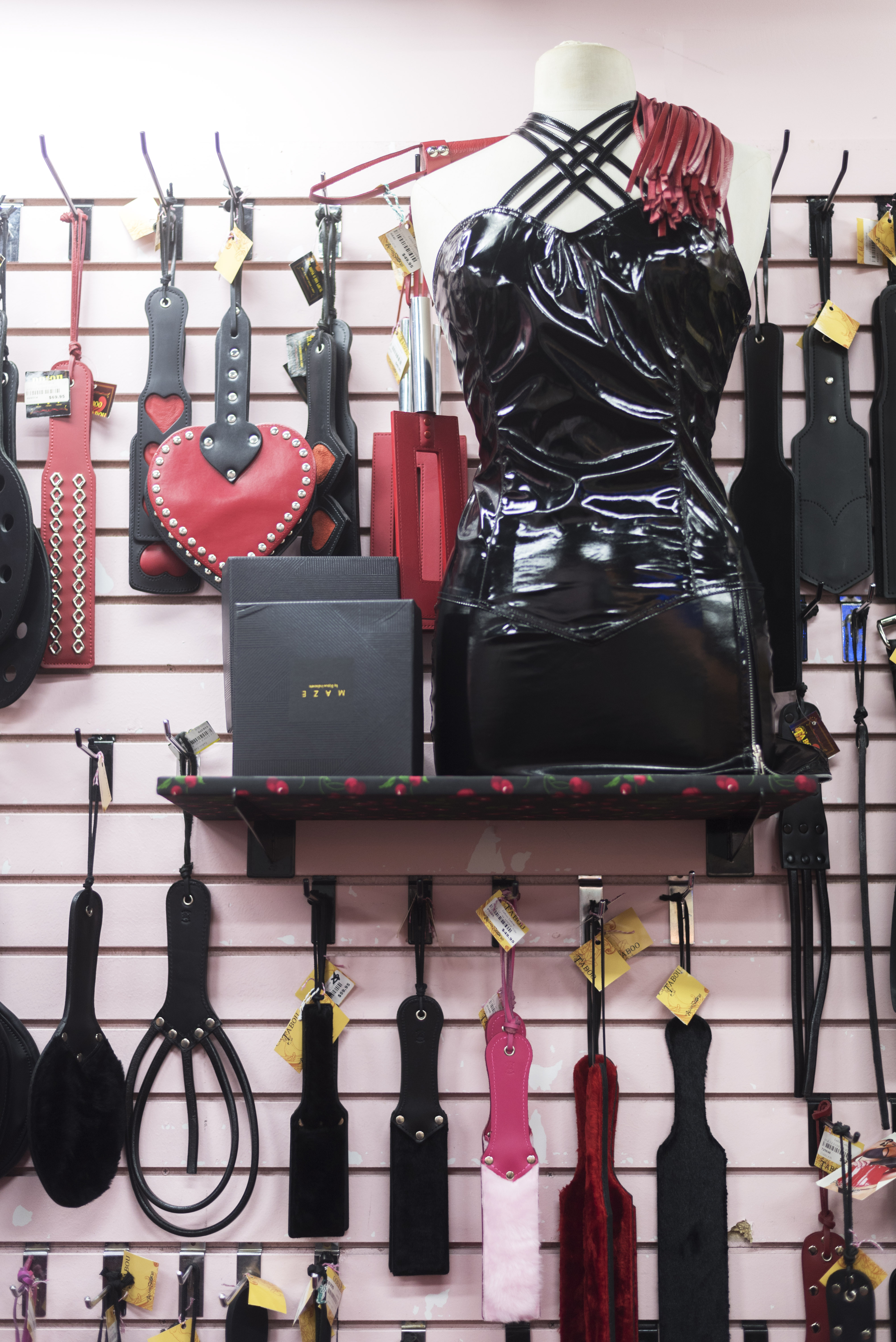 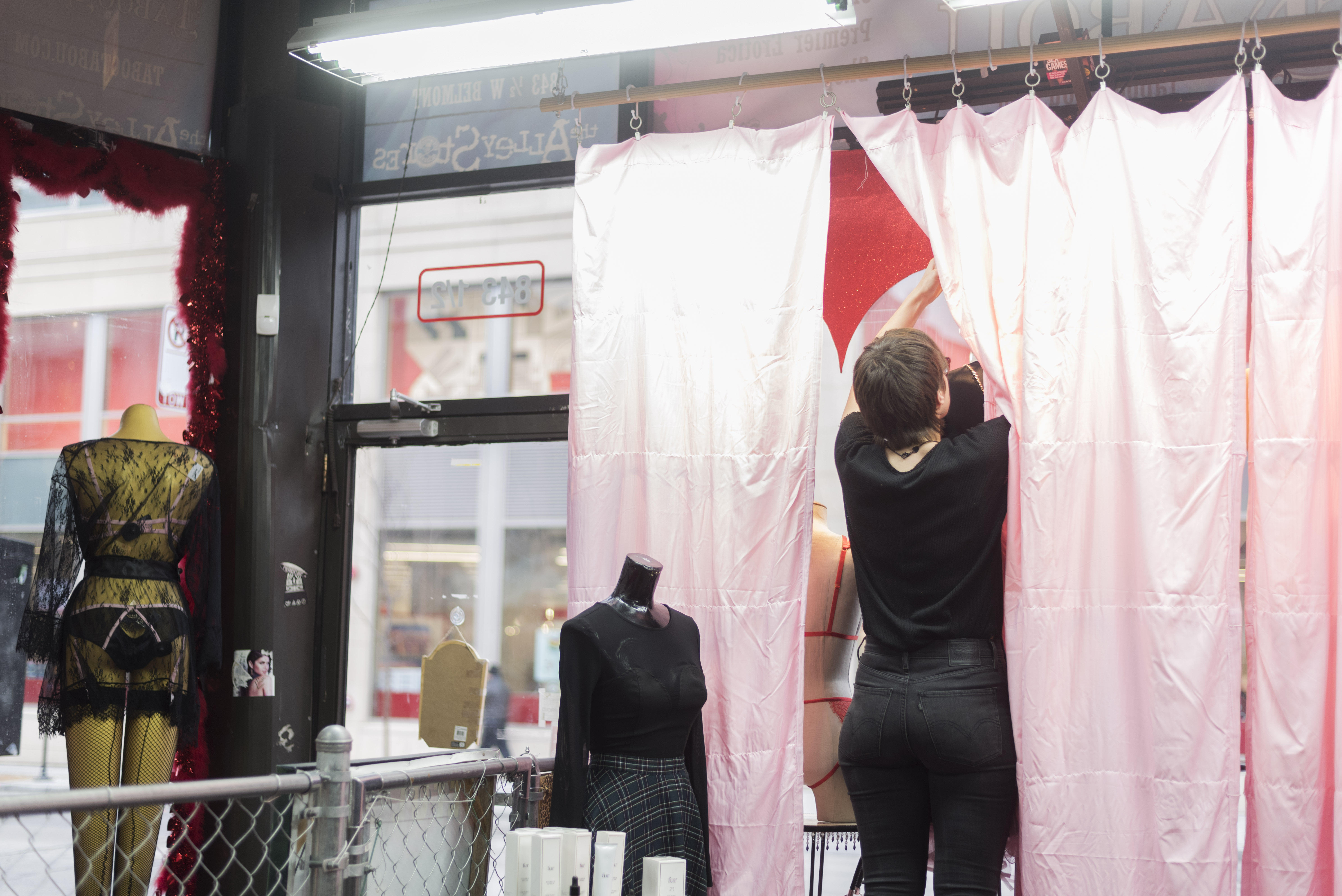 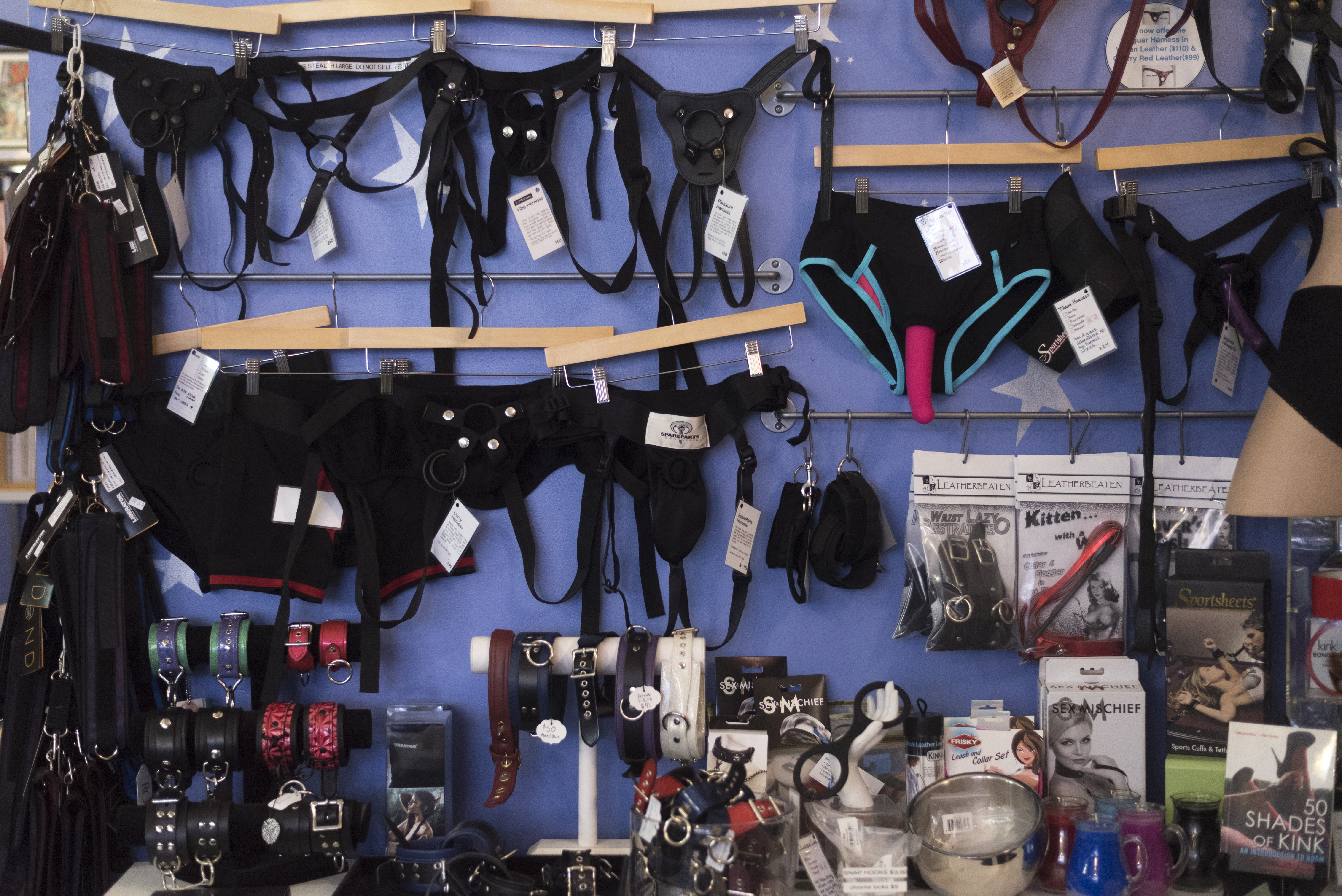 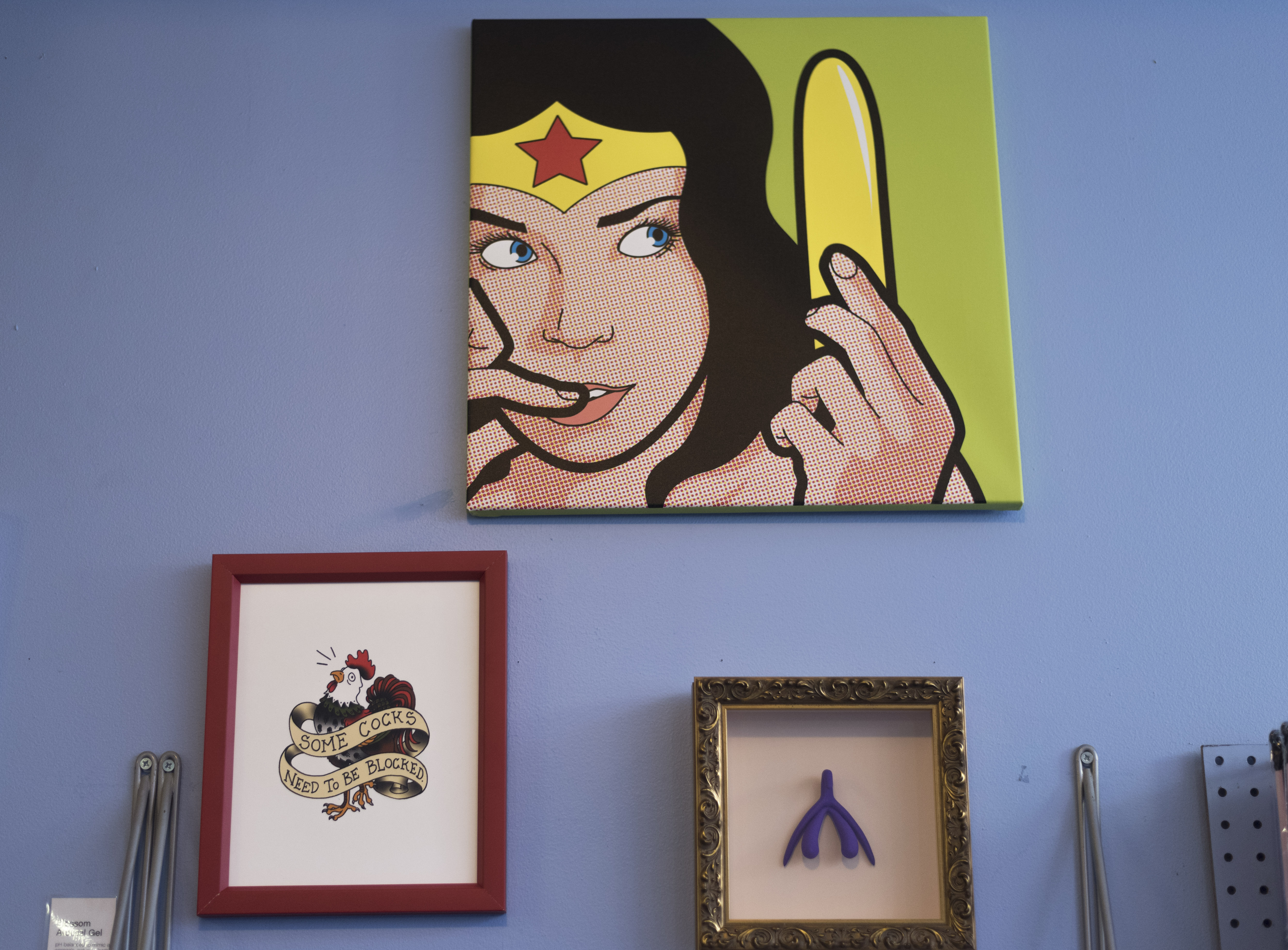