The Reality of Sexual Assault Against Men

A Space of Resistance: Spanish..

The Reality of Sexual Assault Against Men 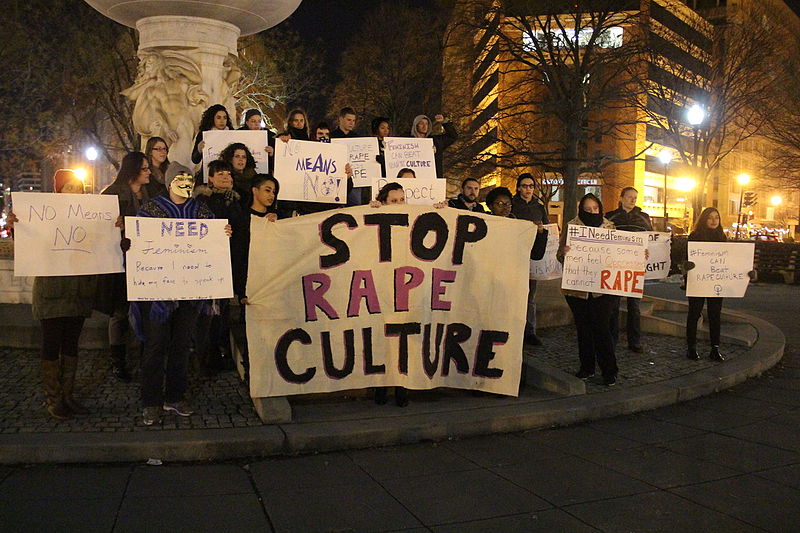 The #MeToo movement brought the scary reality of sexual assault to the surface. While many women have come together to support one another, men are also detailing their experiences with sexual assault to bring awareness to the issue.

Brendan Yukins, who has been a prevention educator since August 2015 at Rape Victim Advocates, said that many sexual assault cases against men remain unarticulated because of the way society values masculinity.

“Because our culture put so much emphasis on male sexual aggression and because our culture doesn’t want to talk about men being sexually abused or what that can actually look like or what constitutes as abuse, a lot of times you have male survivors who are experiencing trauma reactions,” Yukins said.

Yukins himself is a survivor of sexual violence from when he was a teenager. He said that older men were sexually abusive towards him multiple times when he was 16 years old, and nobody noticed the red flags in his physical and mental health. Yukins’ doctor even complimented him on the rapid weight loss.

“I developed exercise bulimia, so I would eat like a bowl of cereal and then I would run 10 miles. I lost so much weight that you could see my skull through my face,” Yukins said. “I wrote this essay once on how I felt like I lost all my innocence and one of my English teacher’s response was ‘but Brendan, you’re 16, you are the pinnacle of innocence.’”

Yukins didn’t have access to the resources he needed to start healing and bring justice against his attacker in high school. Because of his assault in his teen years, he is currently in therapy for complex trauma.

The childhood trauma led him to becoming a prevention educator who provides education training in primary prevention. Primary prevention is seen as the concern of preventing an assault from happening by changing the way society talks about rape culture, internalized misogyny and sex in correlation to how victims are being treated. Yukins said that he is an example of someone living with trauma who is able to hold down a job and stay connected to the world.

Rape, Abuse & Incest National Network (RAINN) reports that one of every 10 rape victims are male, and 2.78 million men have reported being victims of sexual violence in the United States since 1998. More men are now coming forward with sexual assault allegations following the recent push for survivors to tell their stories. Many men have filed cases against actor and “House of Cards” star Kevin Spacey after being empowered by actor Anthony Rapp for going public about sexual advances from Spacey when Rapp was only 14. Terry Crews also admitted on Twitter that he had been groped by an executive at a Hollywood event. 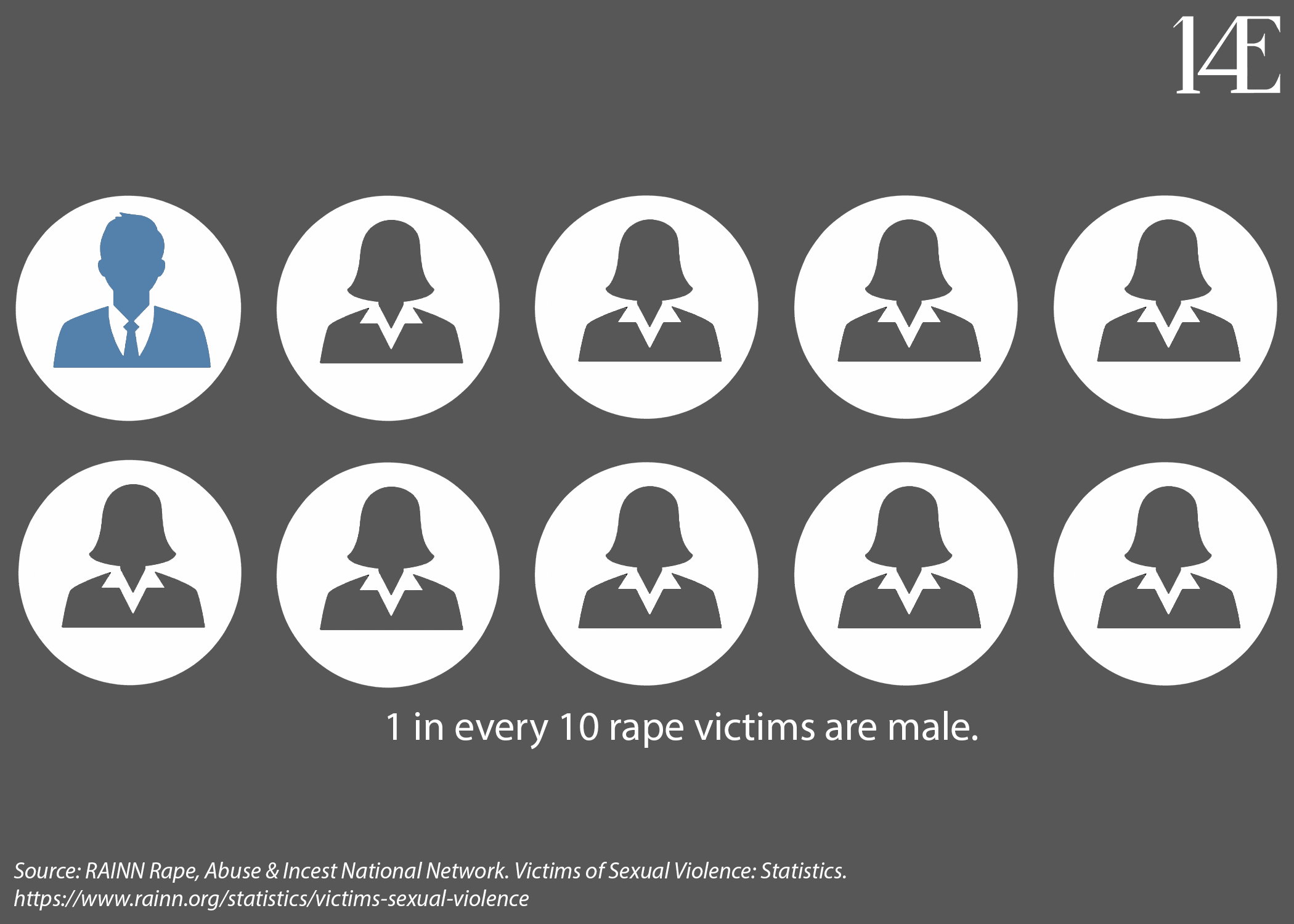 Donna Cassella-Johnson, a counselor from Shorewood, Illinois who focuses on coping strategies with survivors of sexual abuse, said that about 20 percent of her clients are male victims of sexual violence.

Cassella-Johnson uses coping strategies that help clients normalize their experiences by encouraging them to join support groups, empowering them to feel safe again. She also suggests exercise and social support from trusted members.

The most likely long-term effect in sexual trauma is Post-Traumatic Stress Disorder (PTSD), according to Cassella-Johnson. In a situation where someone was violated or assaulted, they will oftentimes experience triggers that take them back to the moment of assault. This can lead to the inability of thinking clearly, avoiding certain activities, and a negative change mental health.

“The client often ruminates about the trauma. It is almost like a tape recorder that replays the assault and they cannot turn it off,” Cassella-Johnson said.

Male and female survivors experience similar reactions to sexual assault, such as PTSD, guilt and social problems. Yukins himself is still dealing with the trauma from the assaults and has been diagnosed with PTSD.

Generally, there is not a positive response to sexual assault victims from the community, said Megan Greeson, who holds a doctorate in psychology and teaches at DePaul University.

“Both men and women often experience disbelief, victim blame, we see people being treated coldly or insensitively,” Greeson said. “That can be by friends or family that they disclosed to, or that can be from institutions they seek help from like the police or medical institutions, counselors, things like that.”

Men are often not believed by the police and hospitals because of the hyper-masculinity and socialization that comes with being a male, according to Anacany Barrera, coordinator of the crisis lines at the Rape Crisis Center located in Chicago.

“There needs to be a shift in our culture of how we socialize these men and women,” Barrera said. “In our society, we kind of reward men who are typically strong or athletes or womanizers; the definition of what it means to be successful as a man.”

Rewarding hyper-masculine behaviors leads men to question their masculinity and sexuality in instances of sexual violence because of their inability to defend themselves in the situation. Society has led men to believe that they must protect themselves in every situation and in the case of sexual assault, they may be unable to.

Barrera stresses that both men and women are perpetrators, but statistically, it’s more than likely that a perpetrator is a straight male.

Female perpetrators are not uncommon, though. The Scientific American reports that in 2014 study, 79 percent of men were victimized by female predators.

Sexual violence is rarely the result of a perpetrator’s attraction to a victim, but rather having the ability to take control over someone’s body. This gives the perpetrator a sense of power and opportunity to take advantage of another person, according to Barrera.

Barrera said talking about consent and prevention at an early age has shown a shift in awareness and healthy relationships.

Campaigns like Sexual Assault Awareness Month, or SAAM, have been spreading awareness about sexual assault since the 1970s. The campaign has a different focus every year that educates the public on consent and prevention. This year, the theme is “Embrace Your Voice!”

“It’s about perpetrators stop raping. So let’s talk about that,” Barrera said. “The more men stand up and say ‘I’ve been sexually harassed,’ ‘I’ve been raped,’ slowly but surely, the tide will change.”