The Discourse of Death

The Ultras of Toyota Park

The Ultras of Toyota Park 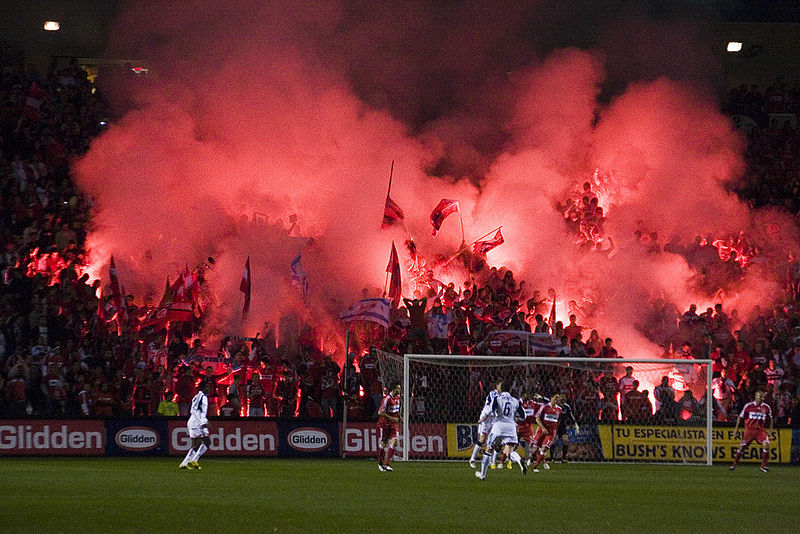 Over the span of 20 seasons, managers leave, players retire and new stadiums are built.

However, the one constant through the years are the fans. The people who show up every match to support their team through thick and thin. Chicago Fire fans are nothing if not loyal.

Since star player Cuauhtemoc Blanco left the club in 2009, the Fire has only made the Major Soccer League (MLS) Cup Playoffs twice, including a first round exit last season. That hasn’t stopped supporters from packing Bridgeview’s Toyota Park.

Fans like Louis Uhler have grown up with the club. Uhler started going to games when the team was founded in 1997. Uhler was ten years old and has followed the team ever since.

Fellow season ticket holder Matt Dunphey started following the team in 2002, when they briefly relocated to his hometown of Naperville, Illinois, during renovations at the club’s first home, Soldier Field.

Soccer offers an experience not always found at other American sporting events. This level of fandom often brings a sense of community. The pregame tailgates are more reminiscent of neighborhood block parties or family reunions than the lead-up to a professional sporting event. “I have friends who I only see at games, that’s something really special,” Dunphey said.

Uhler, a vendor at Wrigley Field says this is different from the environment he’s experienced at other Chicago sporting events. “Every game I go here, it’s like let’s stand up and cheer and be friends,” Uhler said.  For him, being an “ultra” has helped him meet friends with the Fire and other clubs that he otherwise wouldn’t have met.

Ultras are a uniquely soccer concept. While nearly every American team has a devoted section of “superfans,” soccer ultras take it an extra step. On a global level, ultras like Celtic Football Club’s Green Brigade in Scotland are typically politically motivated, with choreographed displays.

For “ultras” like Dunphey and Uhler, that mostly means getting together with friends, meeting ultras from other clubs and loading up a renovated ambulance and driving to Ohio for games against Columbus Crew and Football Club Cincinnati.

Fire midfielder Drew Conner acknowledges the unique nature of Toyota Park. “You’ve got everyone behind you. It’s not just Section 8, it’s Sector Latino as well,” Conner said. “There’s not that level of fandom at football games, with the chanting and things like that,” Conner said, “it’s unique within the city of Chicago.”

What It’s All About

Toyota Park’s location is certainly unique as well. Whereas the Cubs, Blackhawks, Bulls, Bears, and White Sox all play in the city of Chicago, the Fire play in the working class suburb of Bridgeview.  Toyota Park doesn’t have the amenities many European soccer stadiums like Barcelona’s Camp Nou or Schalke’s Veltins Arena do, and that’s ok. For as long as Sector Latino and Section 8 continue to be the emotional heartbeat of Toyota Park, Fire games will continue to be something special.

There aren’t many professional sporting events in Chicago that feature a full band, competing fan sections, or choreographed chants. Are the Chicago Fire the best team in the MLS? Likely not, but there are so many reasons other than the actual team on the field. The experience, the atmosphere of Toyota Park lingers long after you leave. Asked about what he’d say to people who haven’t been to Toyota Park, Dunphey said “support your local club. It’s much more enjoyable to be at the stadium.”

Going to Chicago Fire matches isn’t exclusively about going to watch a game for a few hours. It’s about seeing old friends and making new ones. It’s about living and dying every couple of weeks over a soccer game and doing it all again. Win, lose, or draw, it’s about supporting your team.