Coffee for a Cause: Dark Matter Coffee, Hope for t...

Coffee for a Cause: Dark Matter Coffee, Hope for the Day Raise Money for Suicide Prevention

The purchase of a daily coffee might normally be a guilty pleasure, a routine or a financially irresponsible pit stop. Most people do it anyway. Jonny Boucher, founder of Hope for the Day, is taking that regular guilty pleasure and transforming it into something not so guilty — funds put toward suicide prevention and mental health education.

Sip of Hope, a new coffee shop in Logan Square, says it is the world’s first coffee shop where 100 percent of the profit supports suicide prevention and mental health education. The profits fund Hope for the Day — a nonprofit organization that acts to educate people on mental health and normalize the conversation around it. “Arriving at the point of suicidal crisis can stem from many different paths, all of which share a difficulty to communicate and address the psychological impact an experience is causing in someone’s daily life,” writes Hope for the Day on its website. Suicide is the 10th-leading cause of death in the United States, according to the American Foundation for Suicide Prevention.

“For so long, you’ve seen suicide prevention organizations and mental health organizations live in two different houses,” Boucher said. “We’re firm believers that out of every tragedy comes an opportunity, but every opportunity can’t be fully understood and embraced if it’s not backed with education. It’s about being proactive, being in front of it. How do we normalize that conversation?” 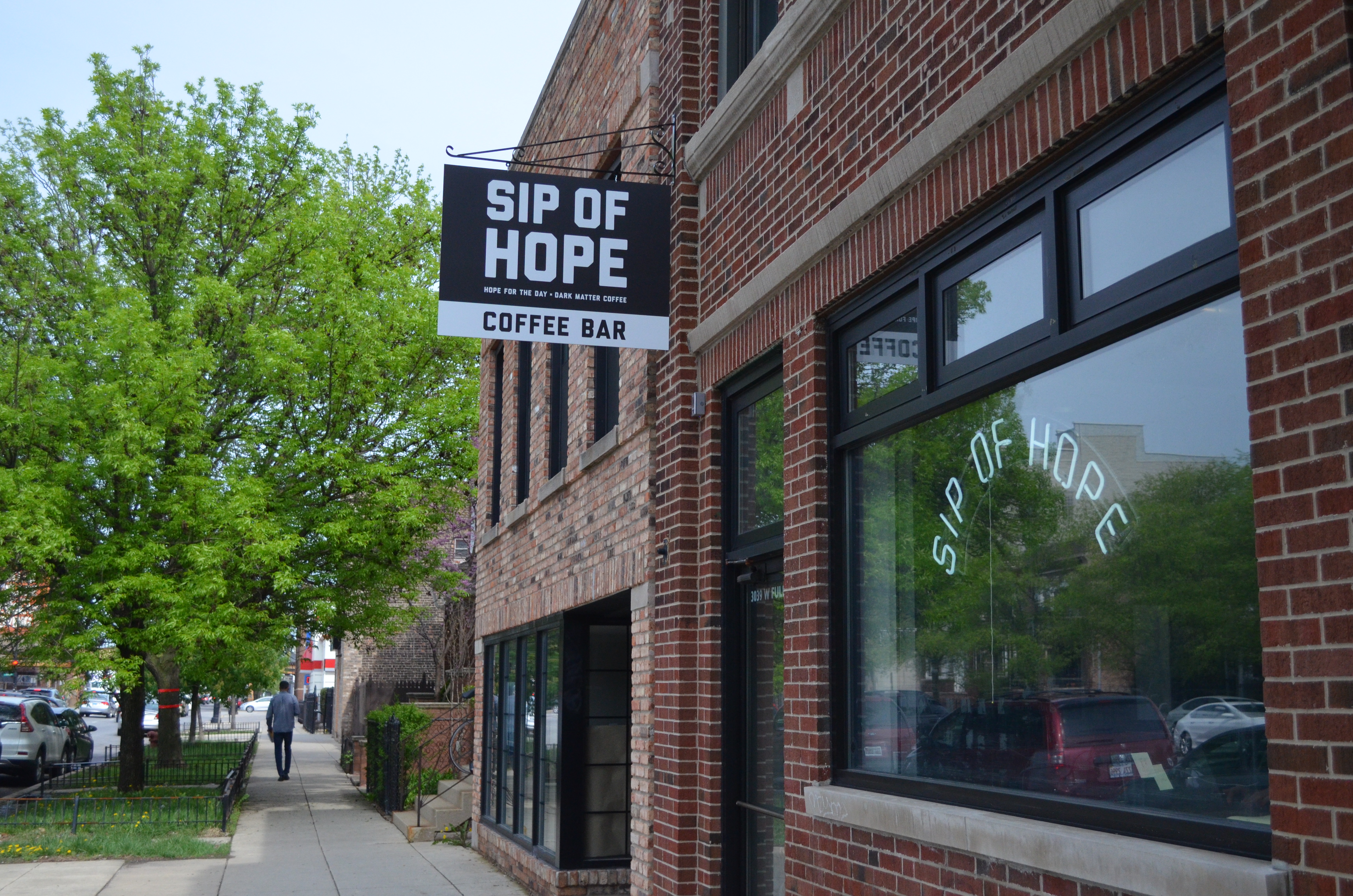 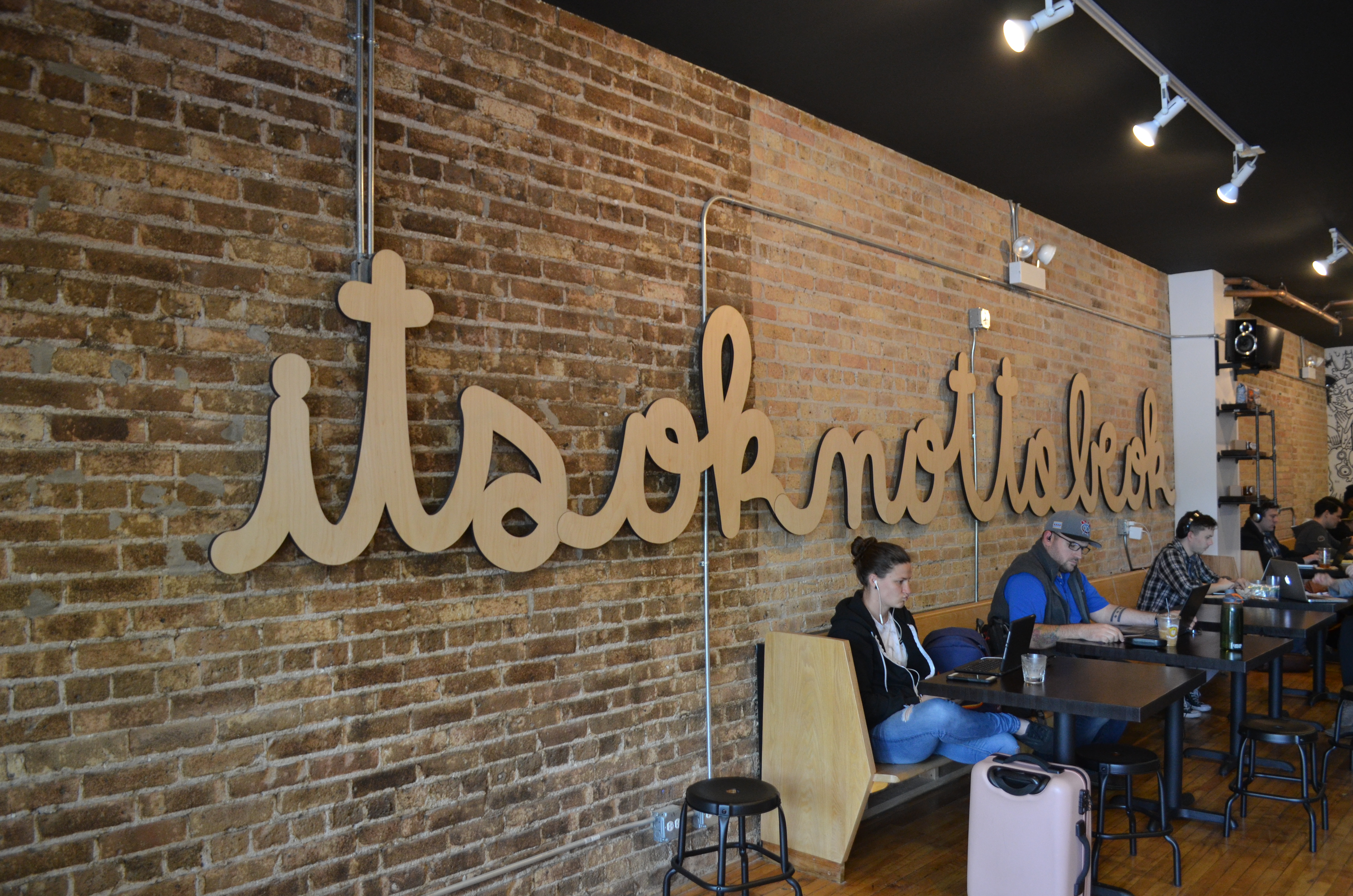 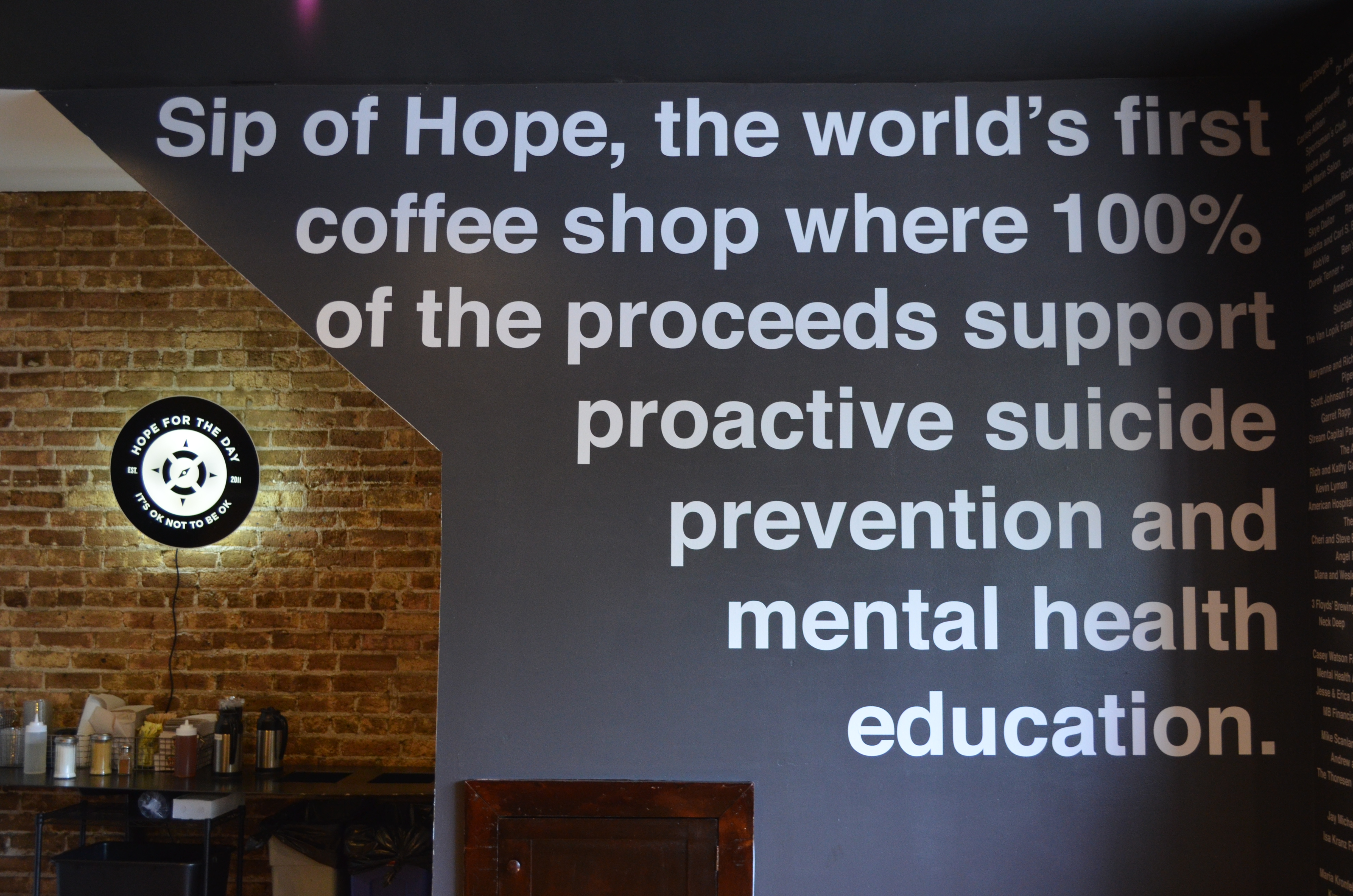 Sip of Hope is Boucher’s way of funding Hope for the Day independently, without having to rely on outside grant money and donations. He wants to take one of the things that people are likely to spend money on — a good cup of coffee — and turn that into a movement.

Aside from funding, Sip of Hope is also meant to provide a safe space in which people can seek mental health resources. Hope for the Day doesn’t provide therapy and can’t prescribe medicine. But there is a resource wall holding racks of pamphlets and articles located in the vestibule area of the coffee shop, where people can find information about where to seek professional help as well as educational materials on mental wellness. Even though they’ve only been open for about three weeks, Boucher said they’ve already had to restock the resource wall, which he sees as a good sign. 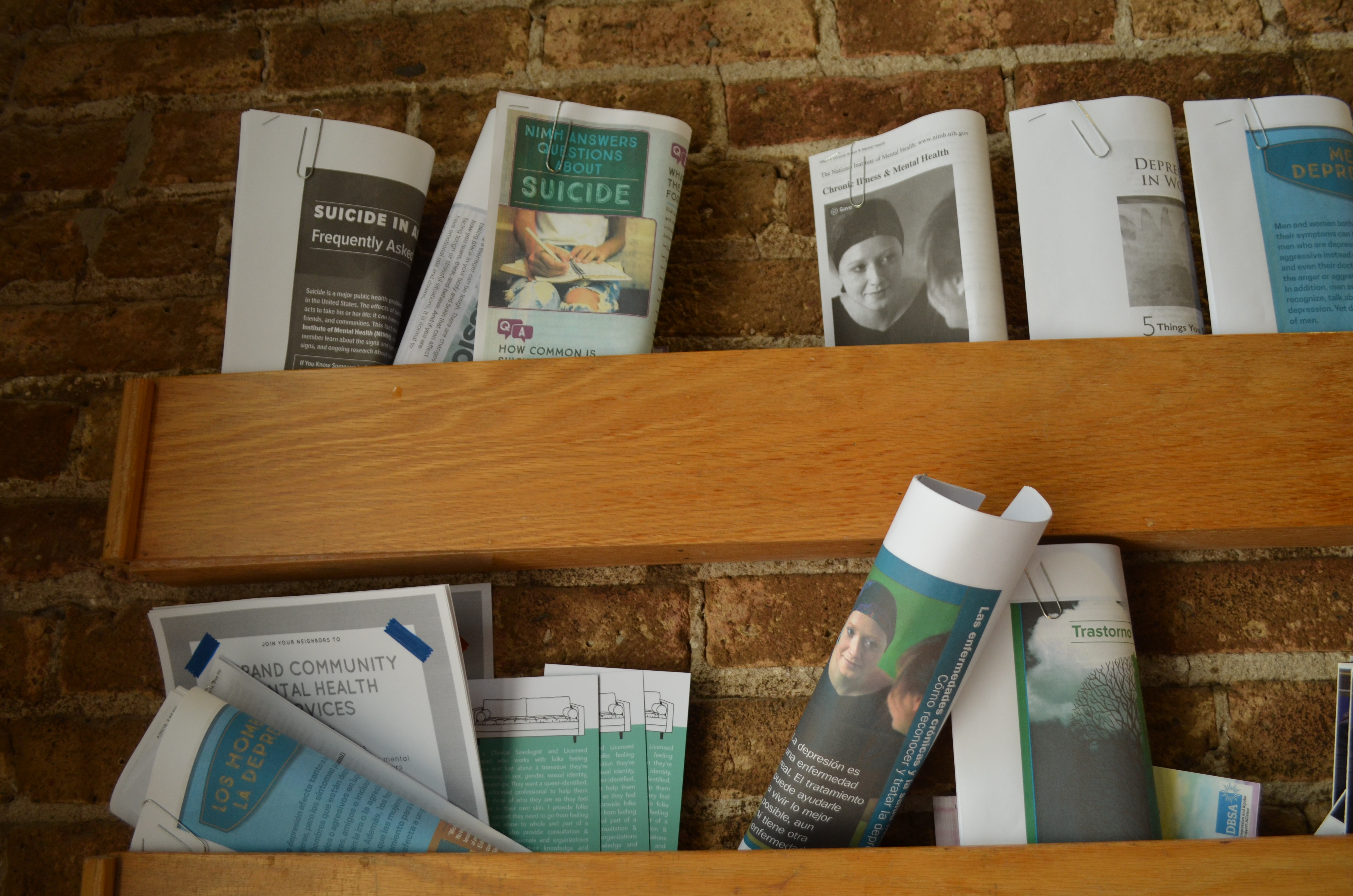 Mental health and suicide prevention resources are located at the front of the storefront for easy access. (Megan Stringer, 14 East)

Hope for the Day also provides mental health training sessions at locations across the Chicagoland area. They have a basic one-hour session, a more intense four-hour session and a hands-on, eight-hour session where attendees can learn CPR in case of an emergency. They host a free training session once a month at the Logan Square Library. Hope for the Day aims to work with anybody they can reach  — like corporations seeking training for their employees, individuals, first responders and others.

Although Hope for the Day has been around since 2011, getting Sip of Hope to open up this month has been about two years in the making. Boucher first came to Dark Matter with the business proposal in the winter of 2016. The two organizations moved forward with the work, fundraising the money to open the shop. Eventually, Hope for the Day raised over $150,000 with the help of Dark Matter.

Boucher first started working with Dark Matter in 2013, when Hope for the Day was working on their first art show. Kyle Hodges, who works as the Minister of Propaganda at Dark Matter Coffee doing marketing and collaborations, reached out to them to see if there was any way they could support the event and its cause. Dark Matter did support the event, and the next day, people from both organizations were hanging out at Riot Fest, Boucher said.

“One thing just led to another,” Boucher said. “We’ve been in a lot of these conversations where one thing leads to another and it’s something bigger than the both of us.”

The collaboration between Hope for the Day and Dark Matter Coffee soon grew into a bag of beans, also called Sip of Hope, which Boucher said was designed to have resources on it. 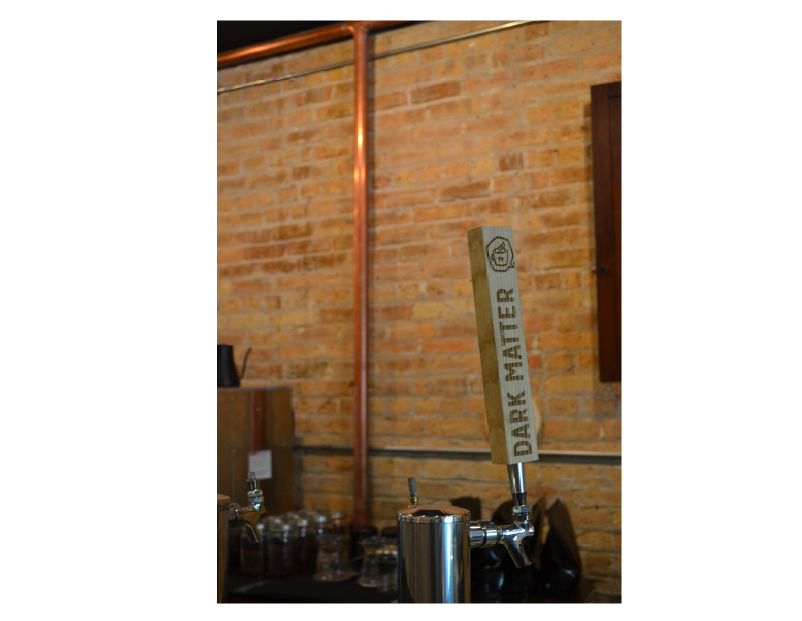 All of this is part of Boucher’s mission: ingraining active suicide prevention into the foundation of his non-profit. In order to make that a reality, he knows they have to find a revenue stream outside of the typical and collaborate with other companies as much as possible, which will help them reach even more people who might need to hear their message. For example, Boucher said they’re “notorious for working with the alcohol industry,” and have designed beer bottles to have resources on them as well.

“I was aware of organizations like that, but Jonny’s was different,” Hodges said. “There’s no other way to put it, we just made a connection.”

Although Dark Matter is a partner and helps provide coffee, equipment and training on how to run a coffee shop, Hope for the Day is the sole owner and daily operator of the shop. Boucher said they have it set up as a social enterprise, and that Sip of Hope is an LLC while Hope for the Day remains a nonprofit, and the proceeds come in as a contribution. Hodges said that aside from raising money, it’s important to have a physical space where the community knows they can seek safe resources.

“It gives them that place to gather as well and someplace to continually go,” Hodges said. “Instead of waiting for an event or a meeting, Sip of Hope is going to be that place that allows them to go there on a way more frequent basis.”

Boucher said Dark Matter as a company is a good case study for what they hope to instill in organizations they train and work with. He said Dark Matter is in the process of mandating its hiring process, so that new hires are required to complete a mental health education training session. 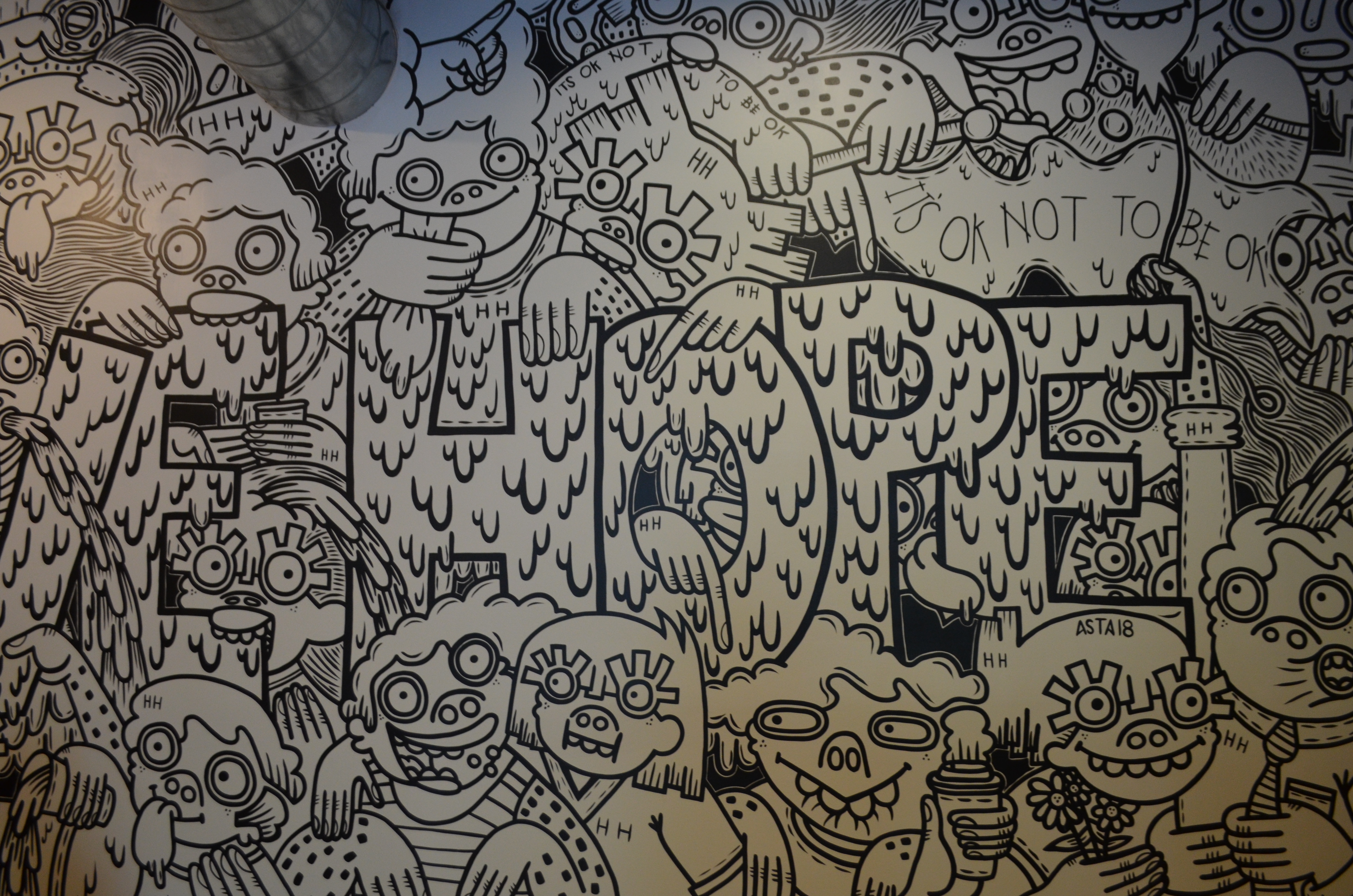 Even if somebody feels they don’t need it or doesn’t have personal connection to the cause, Boucher believes normalizing the existence of mental illness and making spaces to discuss it is one form of active suicide prevention.

“At the end of the day we’re a coffee shop,” Boucher said. “But I think the ability for people to utilize buying a cup of coffee every day to be a part of a charity and a mission, it’s just very welcoming.”