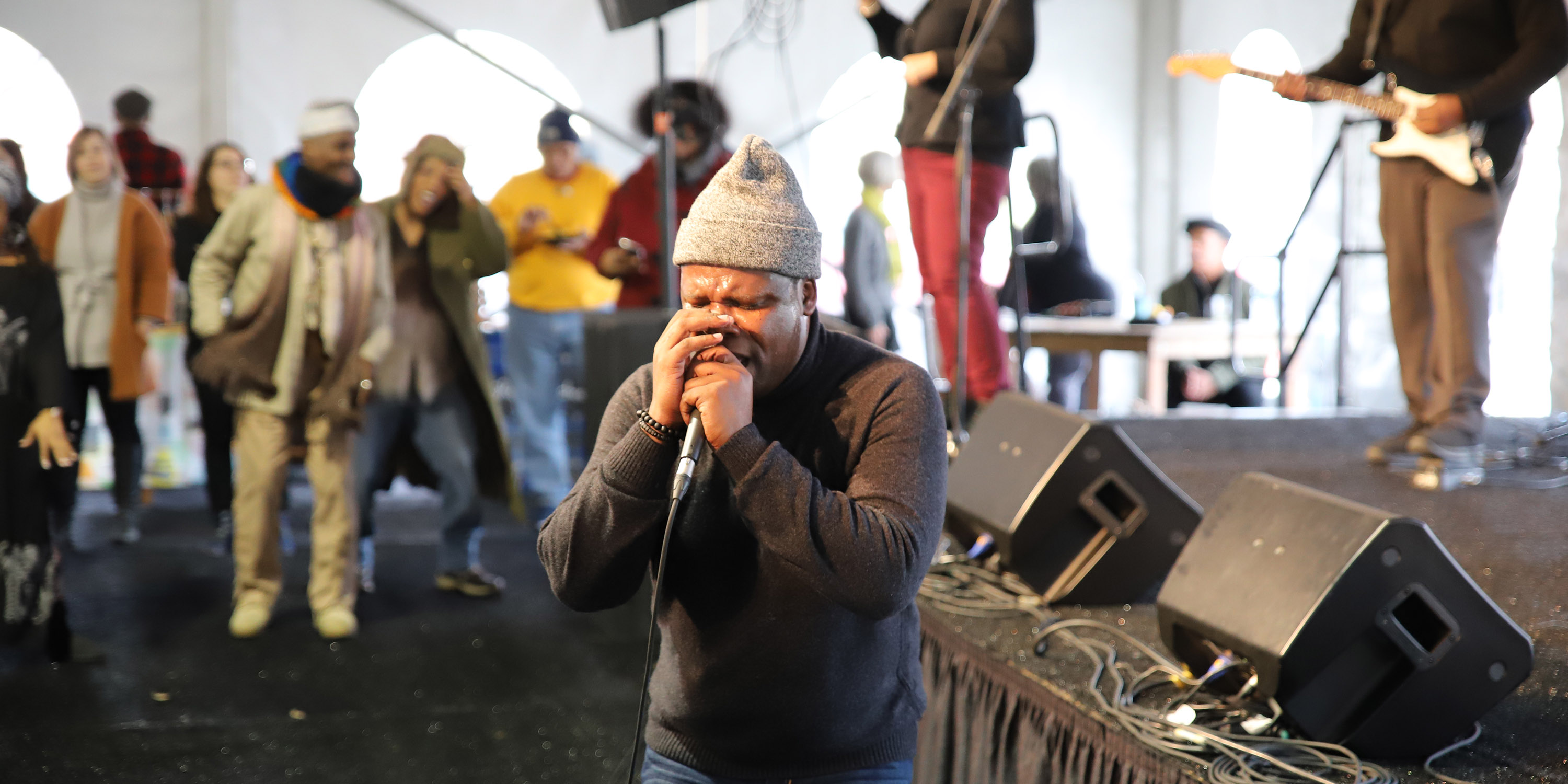 The University of Chicago officially opened the Green Line Performing Arts Center in Washington Park on Saturday, November 10. Hundreds of people came to celebrate the community’s heritage of cultural arts and to look forward to redeveloping an arts hub in South Chicago.

The center is the university’s first construction project in Washington Park. The new space features an 80-seat black box theater, a practice performance room and an entrance lobby. The project, which began construction in September 2017, cost an estimated $10 million to build and was funded primarily through the Efroymson Family Fund, Irving Harris Foundation and the University of Chicago (U of C). 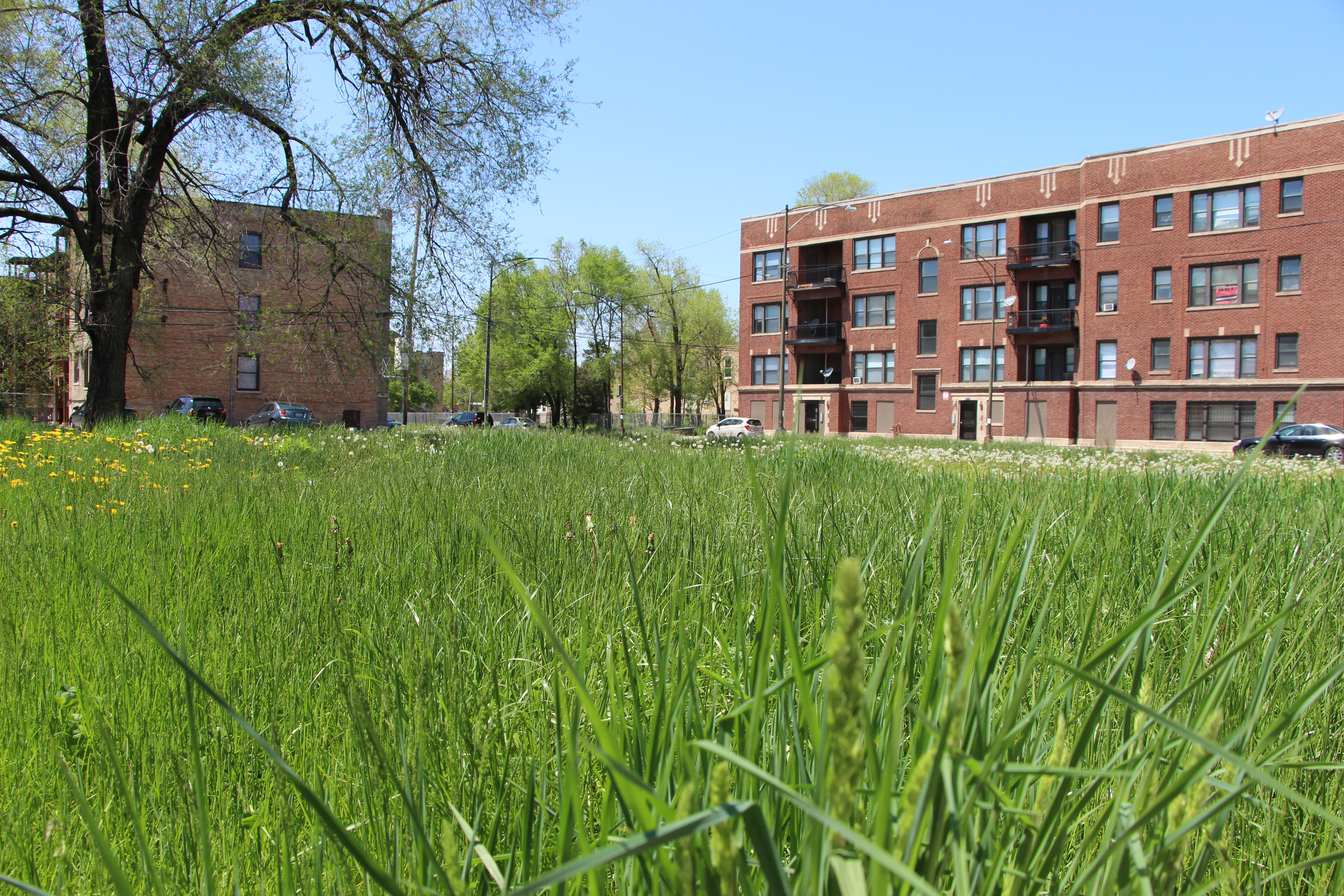 A lot lies empty in Washington Park on Michigan Avenue. The neighborhood has had a problem of chronic land vacancy and disinvestment over the past fifty years. (Chris Silber, 14 East)

The arts center is part of a larger Garfield Boulevard “Arts Block” initiative implemented by the U of C’s Arts + Public Life Program. The initiative has a goal of revitalizing the Garfield Boulevard corridor through arts, working both through university-run projects such as the Arts Center and Arts Incubator and privately run businesses such as Peach’s at Currency Exchange Cafe and BING Art Books.

Erin Venable, assistant director of Communications at Arts + Public Life, said the project is meant to create a connection between the community and the University.

“The idea is to bring a much-needed space to the South Side, to the Washington Park area, a platform for the vibrant talent that already exists here,” she said. “We are the intersection of education and arts in the community.”

Despite having a creative presence in Washington Park and the surrounding neighborhoods, the new Arts Center is one of the only theater venues located within the community. Of the more than 200 theaters in the League of Chicago Theatres, only three venues are on the South Side. 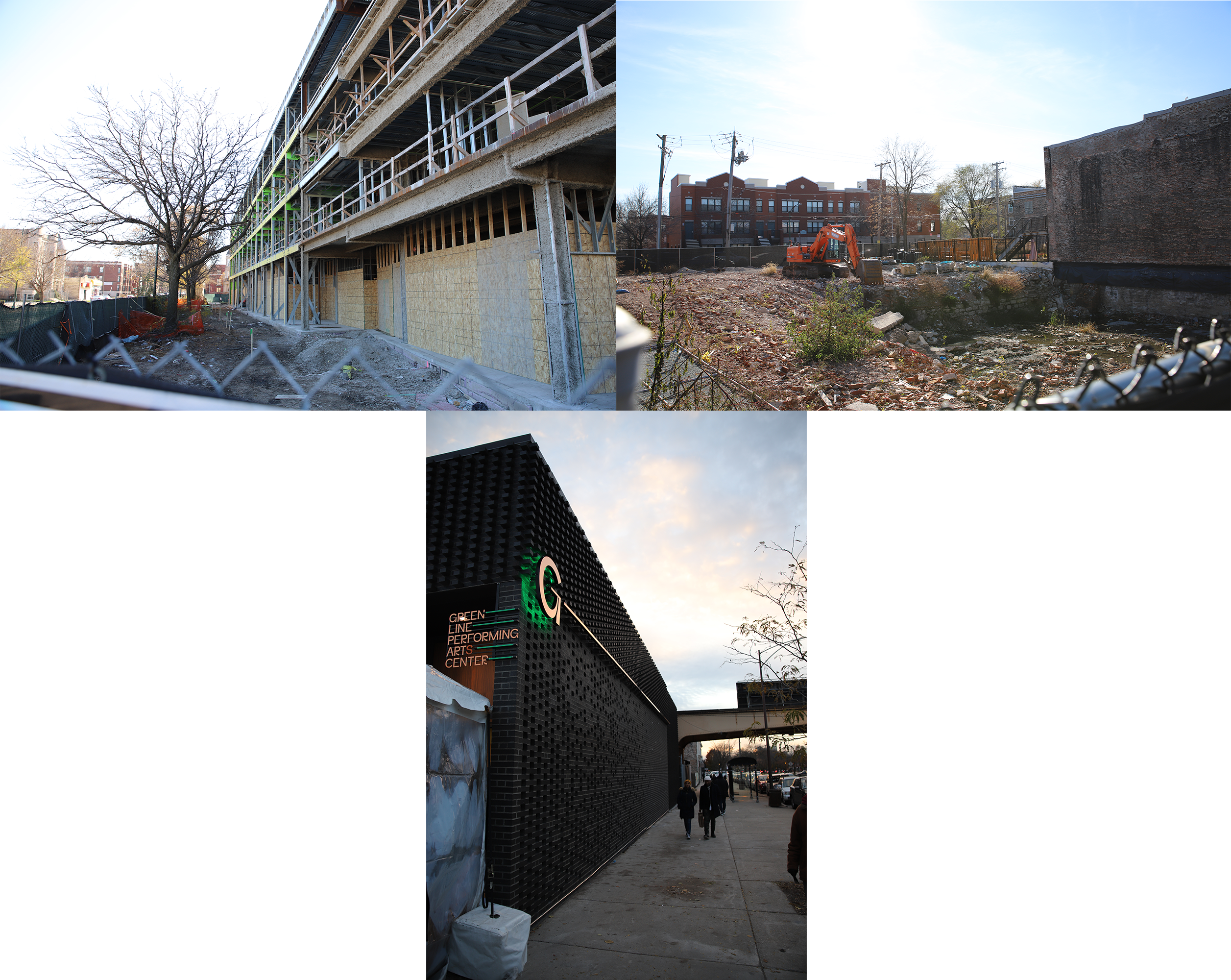 The University’s main campus is in the neighboring Hyde Park. For more than 100 years, the university isolated itself from outside neighborhoods. However, the Arts + Public Life division is making an effort to change its century-old culture of reclusivity.

“The University of Chicago has strong roots in the South Side, and this a part of that,” said Venable. “We’re not just Hyde Park, we’re not just Woodlawn, we’re Chicago.” 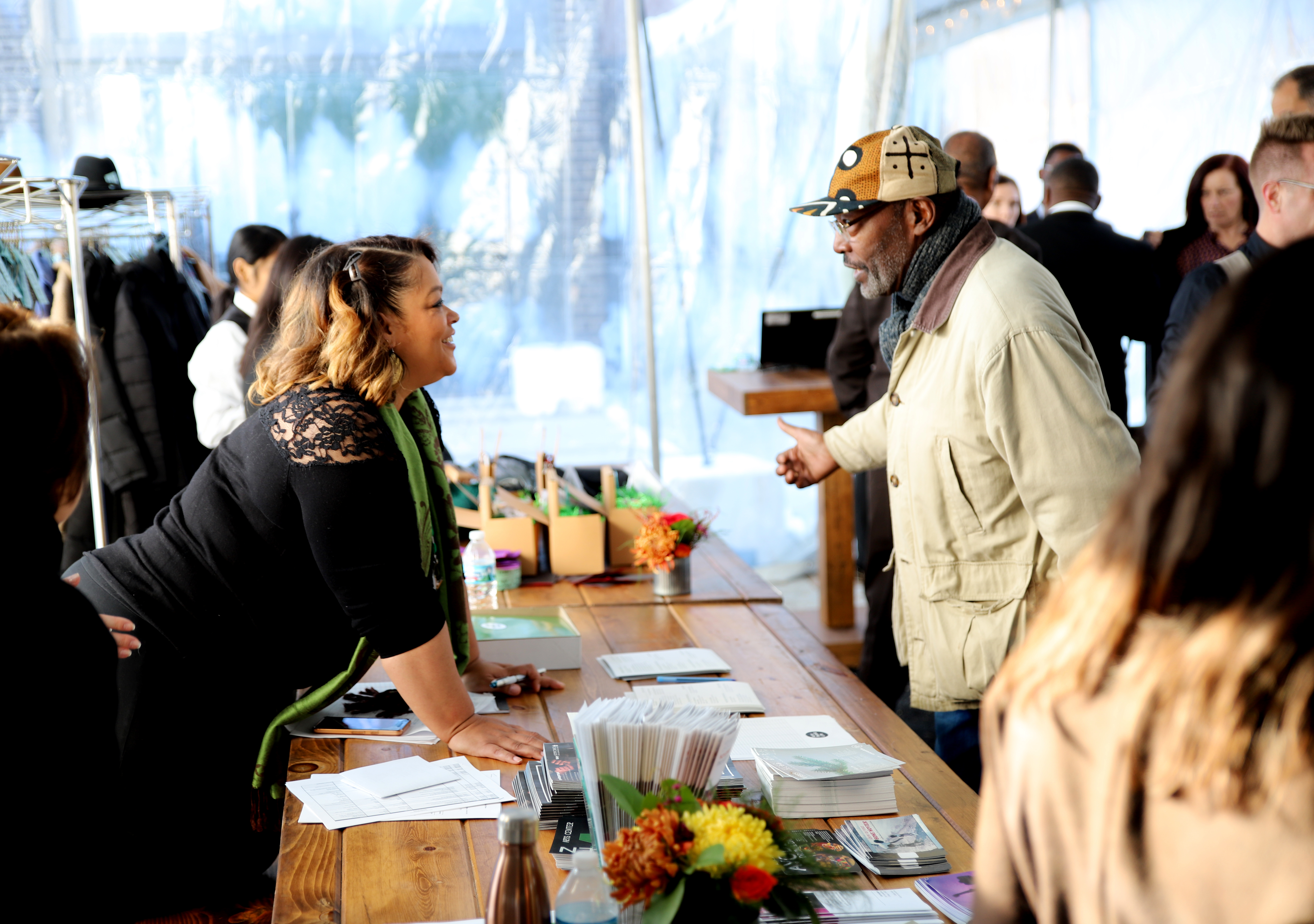 Branded as both an opening and “community celebration,” the opening event was free to the public and featured artists and acts from throughout the South Side and city. The lineup had 10 different performing groups, ranging from child actors to professional vocalists.

The grand opening attracted community members new and old and patrons of the arts from throughout the city. Oliver Moore Sr., a former operating engineer for the City of Chicago, said he lived in Washington Park more than 40 years ago. He said he remembers famous artists and writers from the neighborhood such as Lorraine Hansberry and Quincy Jones.

“This is a major area for the old timers,” said Moore. 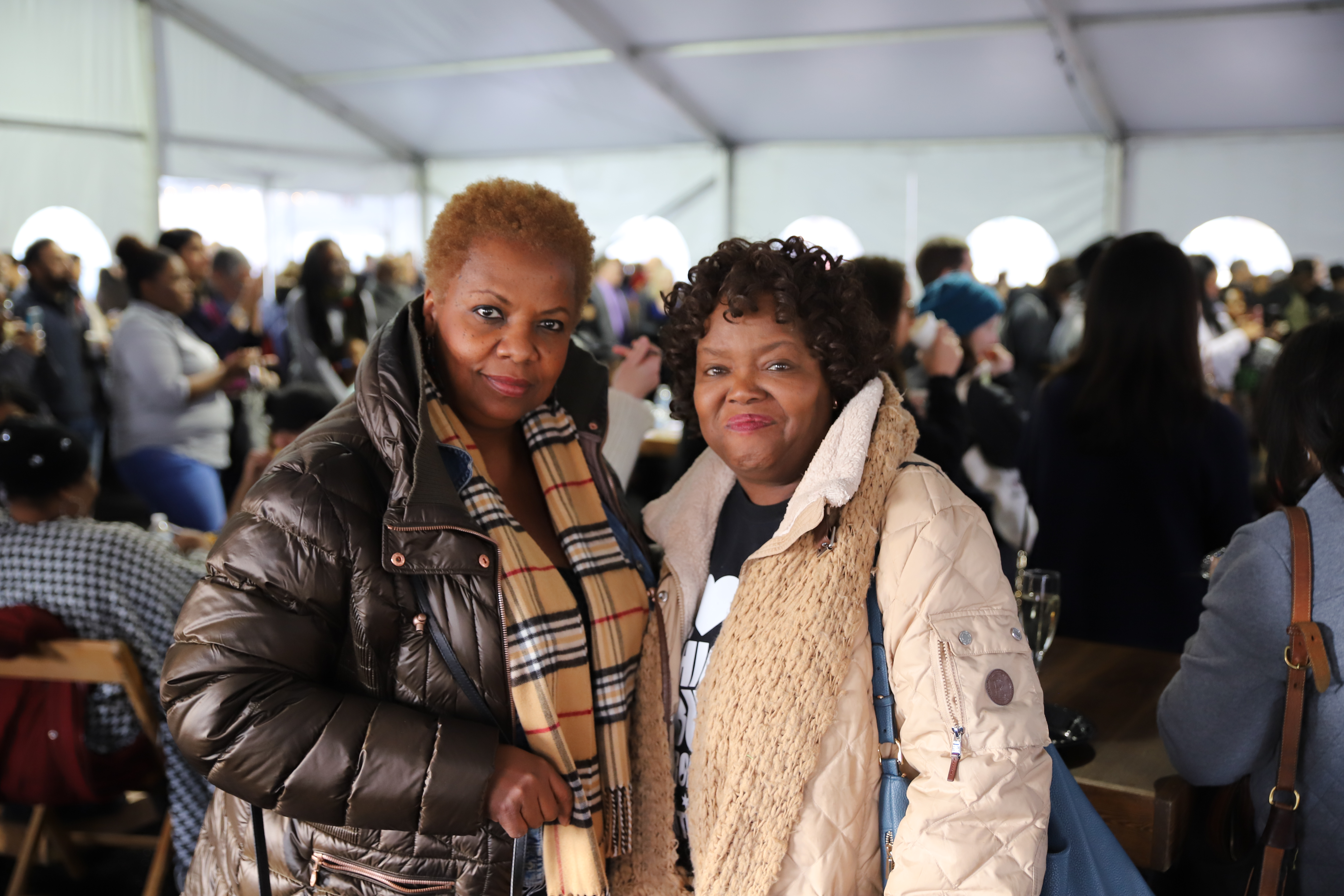 Donna Hampton-Smith and Sandra Bivens smile as music plays on-stage. Hampton-Smith is a member of the Washington Park Chamber of Commerce and Bivens is a part of the 51st Street Business Association. (Chris Silber, 14 East)

Washington Park and the historical Bronzeville communities of Douglas and Grand Boulevard were the center of African-American culture in the early 20th century. Washington Park’s population peaked at 56,856 residents in 1950, but the community lost more than 20 percent of its population every decade between 1970 and 2000. As of 2015, only 12,081 people live in the neighborhood.

Bronzeville and Washington Park’s severe economic decline in the latter half of the 20th century can be attributed to several factors, including failed housing projects and a loss of industrial base. The high rise Robert Taylor Homes public housing project constructed in 1960 concentrated poverty to unmanageable levels, and was demolished in the late 1990s. Coinciding with this rise in poverty, many of the area’s largest industrial employers from the meatpacking and steel industries left Chicago in the 1960s and ‘70s.

While the area has experienced steep economic decline, it is still considered a creative hub in the city. Venable said the South Side’s rich history of arts is one of the main reasons people within the university prioritized this particular arts block project. “A lot of the [planning] with the Performance Arts Center was in response to the performing arts community,” said Venable. “The advisory council getting feedback from the existing traveling theater groups and ensembles just saying, yeah, we can do this.” 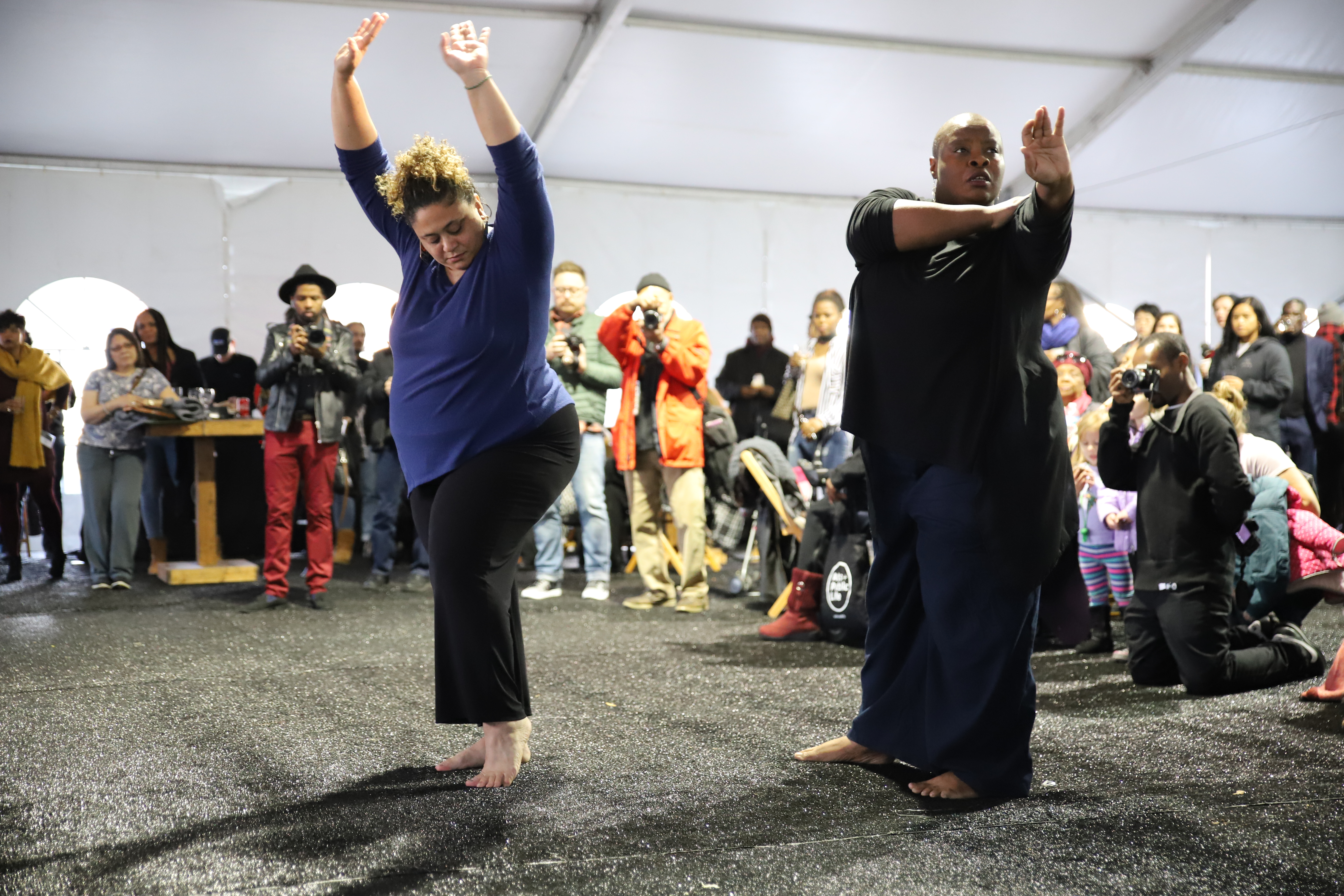 Dancers from the Honey Pot Performance perform in the event tent just outside the new Performing Arts Center. The dancers are an Afro-diasporic feminist collaborative that documents subjectivities in contemporary global life. (Chris Silber, 14 East)

With reinvestment also comes fear of community change. Moore expressed concerns over the possibility of gentrification. He said he has witnessed the disinvestment in Washington Park and gentrification in other communities like Wicker Park.

Venable said the university has worked from the beginning with the community to create a relationship with members to avoid causing displacement.

“Everything we’ve talked about today has been under the guidance of community interaction, for the community by the community,” said Venable. “It’s about working within the community to give people who have lived here all their lives what they’re looking for.” 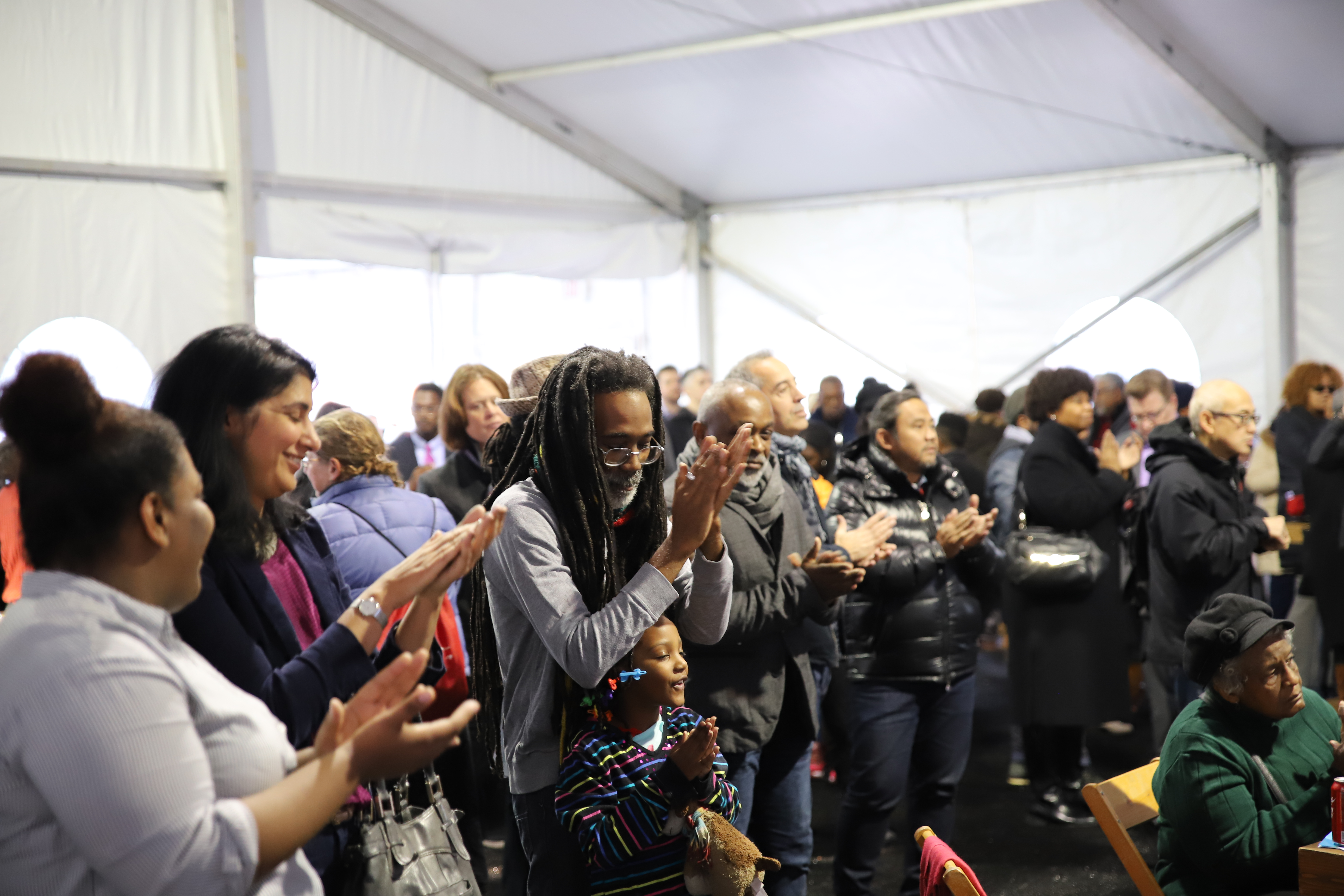 Billy Tuggly and his daughter Carmendy clap to a performance by Avery R. Young and De Deacon Board. Tuggly, a performance poet, spoken word artist and teaching artist in South Chicago, expressed excitement for the new spaces and opportunities the Performance Arts Center will bring. (Chris Silber, 14 East)

“I came because I wanted to see what’s happening down here now,” said Boyd. 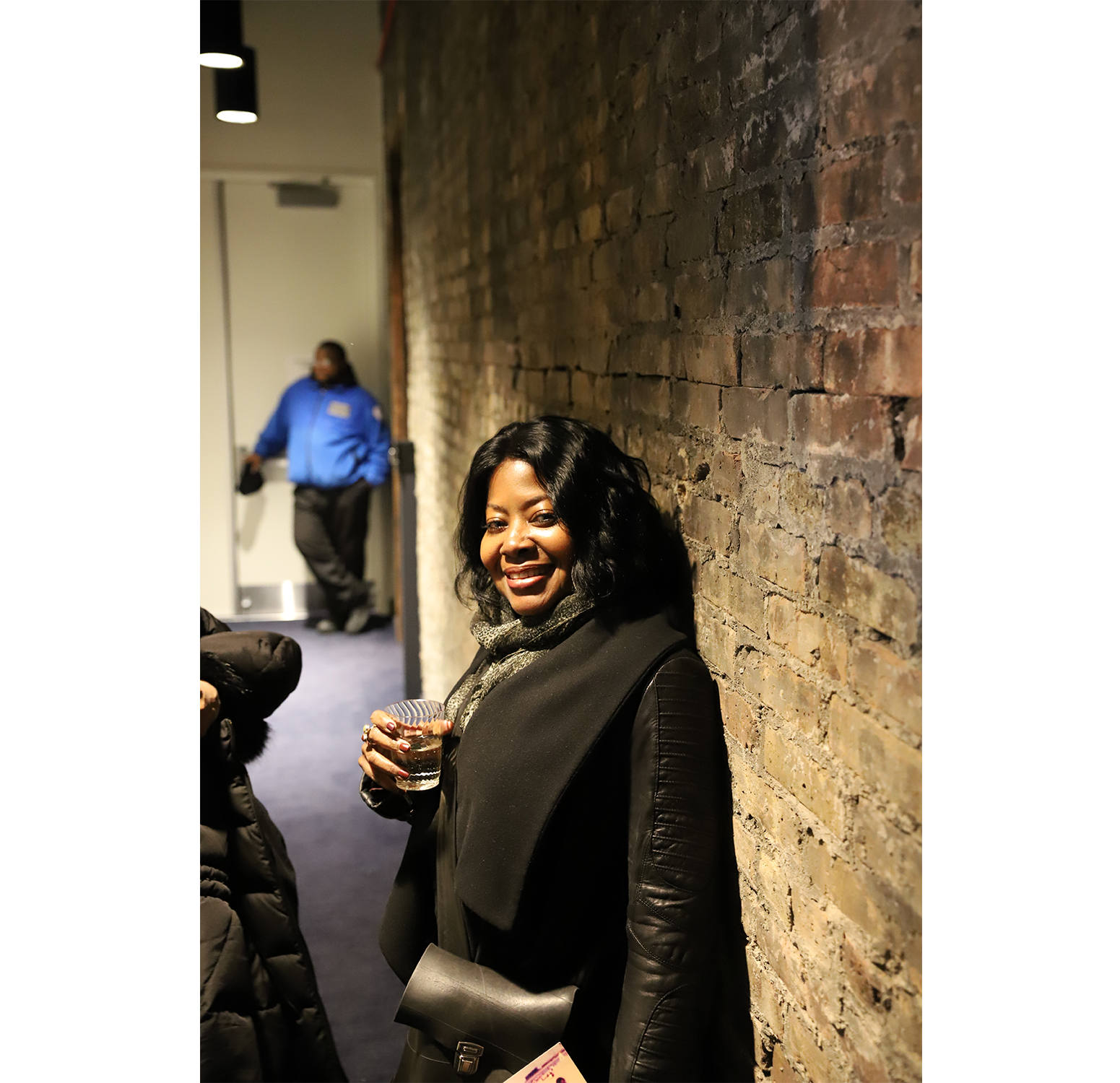 Denise Boyd leans on a brick wall in a hallway outside the main theater. The site was once the home of Rhumboogie Café,a jazz venue owned by boxing great Joe Louis. Many materials from the old building at this site were repurposed in the new building’s design. (Chris Silber, 14 East)

Several high-profile attendees were also present. 3rd Ward alderman Pat Dowell gave a speech, saying, “Already the economic impact of this arts block has been robust. Putting more than $20,000 into the pockets of South Side vendors, providing more than $246,000 in stipends to students, and engaging hundreds, hundreds of high school students with the majority coming form neighborhood CPS schools.” 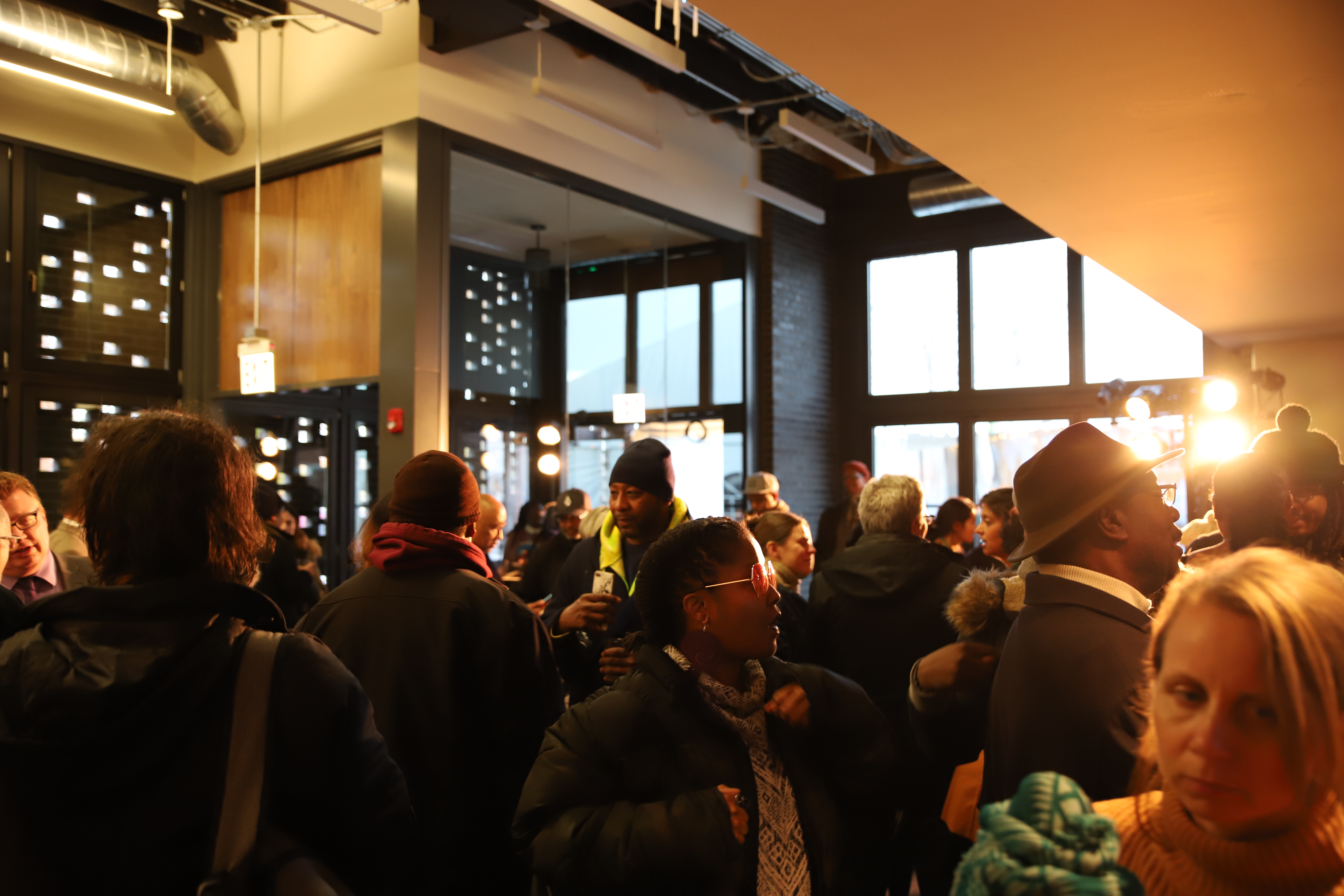 Mark Kelly, Commissioner of the City of Chicago’s Department of Cultural Affairs and Special Events, spoke on behalf of Mayor Rahm Emanuel. “At one point I thought of the university as almost the ‘citadel on the hill,’” said Kelly. “It did not feel like the university that was engaging the community. And look what they’ve done.”

Kelly also stated that 2019 will be “The Year of Chicago Theater,” a citywide initiative to embrace the city’s theatrical heritage and build more theaters in the South Side. “We need to recognize that the South Side of Chicago is like Florence was to the Renaissance,” said Kelly. 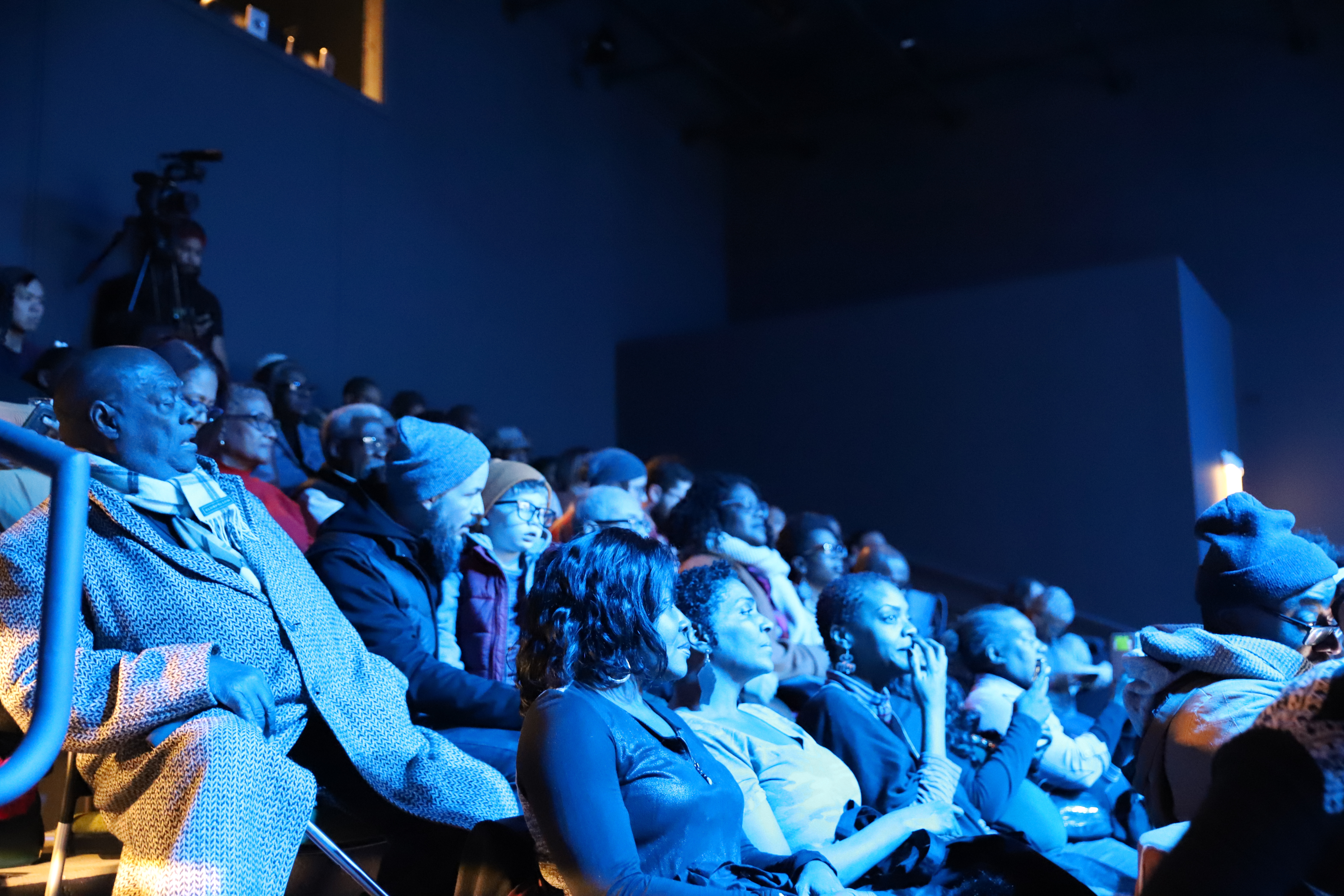 The youngest performance of the night came from the act “Black Girls (Can) Fly” by The Tofu Chitlin’ Circuit. They performed in the E&A black box theater in front of a packed crowd. The performance touched on discrimination Black girls face in Chicago schools, and rallied around the chorus “Bessie Coleman had a dream to be the first Black woman in a flying machine!” Bessie Coleman was the first woman of African-American and Native-American descent to have a pilot’s license. 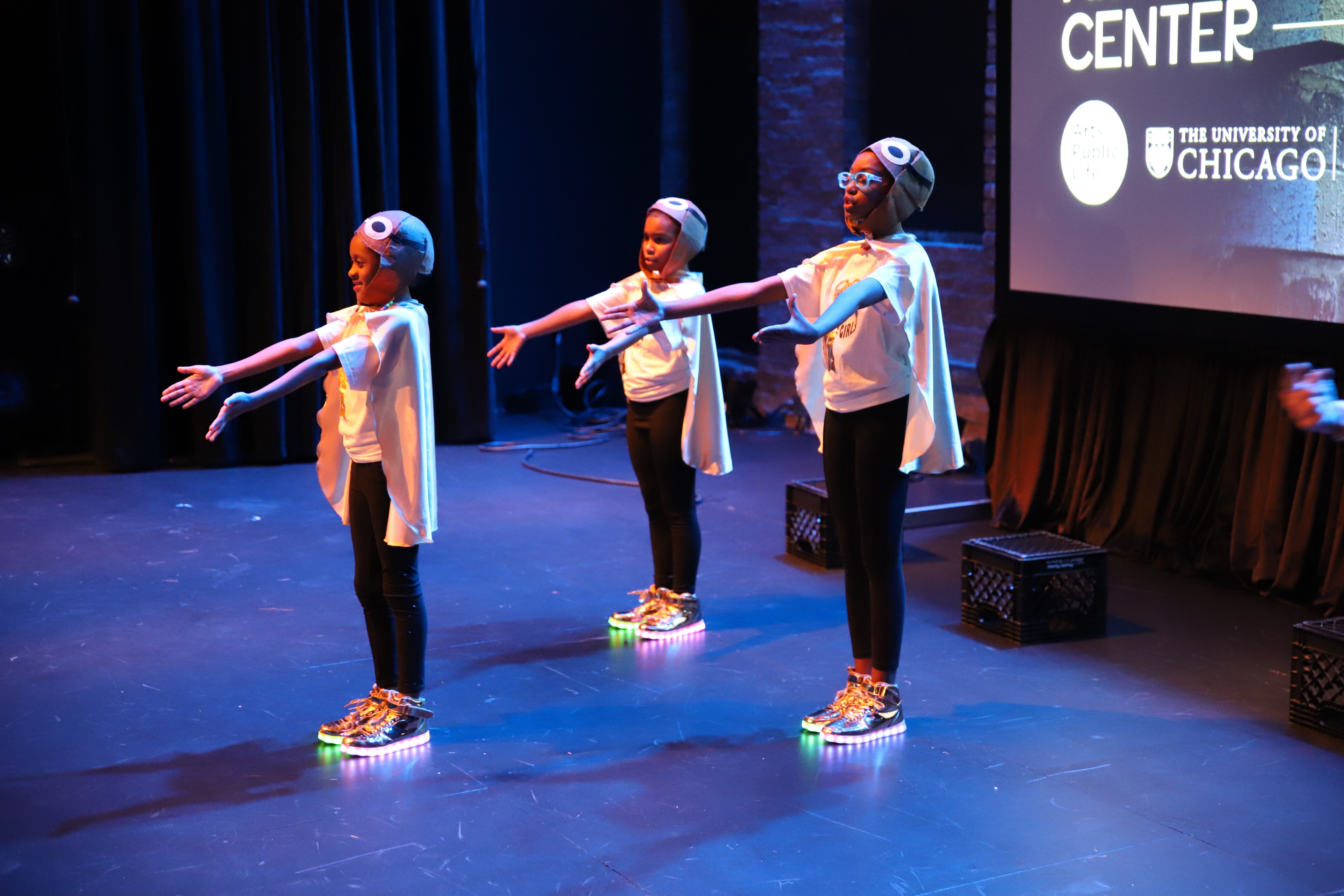 Among other performers were jazz trio The Corey Wilkes Trio and artist Avery R. Young & De Deacon Board. Students also performed from Arts + Public Life’s Community Actors Program, which works in partnership with After School Matters to provide opportunities for teens to use performance arts to promote social justice.

Much work is still in progress on the Garfield Arts Block, and community members expressed the desire to be a part of it. Sandra Bivens of the 51st Street Business Association said her organization and others are ready to cooperate.

“We will be collaborating with [The University of Chicago] to make sure there’s outreach going on,” said Bivens. 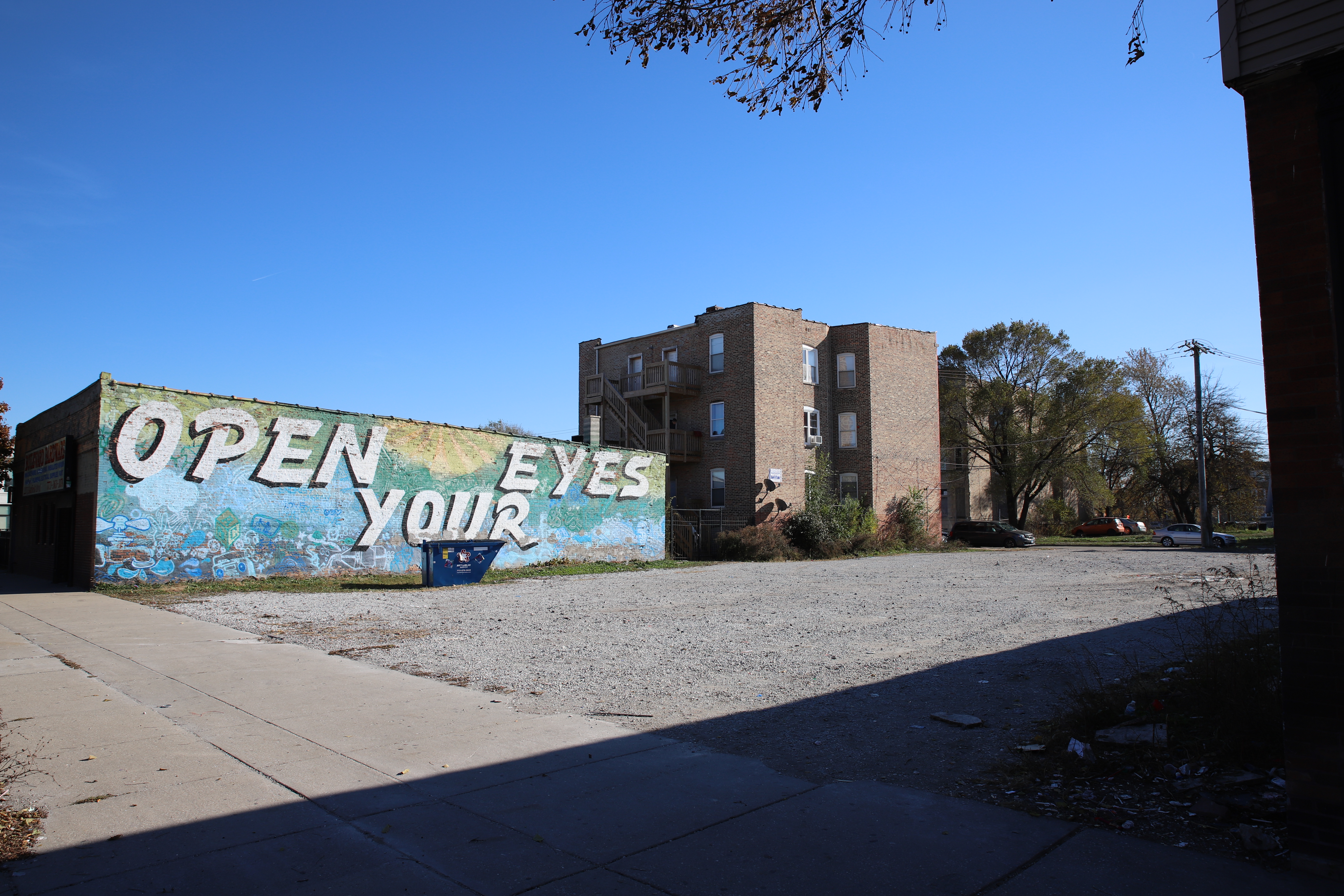 A mural on the side of Boulevard Hardware overlooks a vacant lot on Garfield Boulevard a block west of the Green Line Performing Arts Center. (Chris Silber, 14 East)

As the project develops, South Side residents remain optimistic that renewed investment in the arts will revitalize communities and provide platforms for creators within their communities.

“I am excited for the reemergence of arts in this community,” said Moore. “This area has such a rich history.”