Our Favorite Stories From 2018 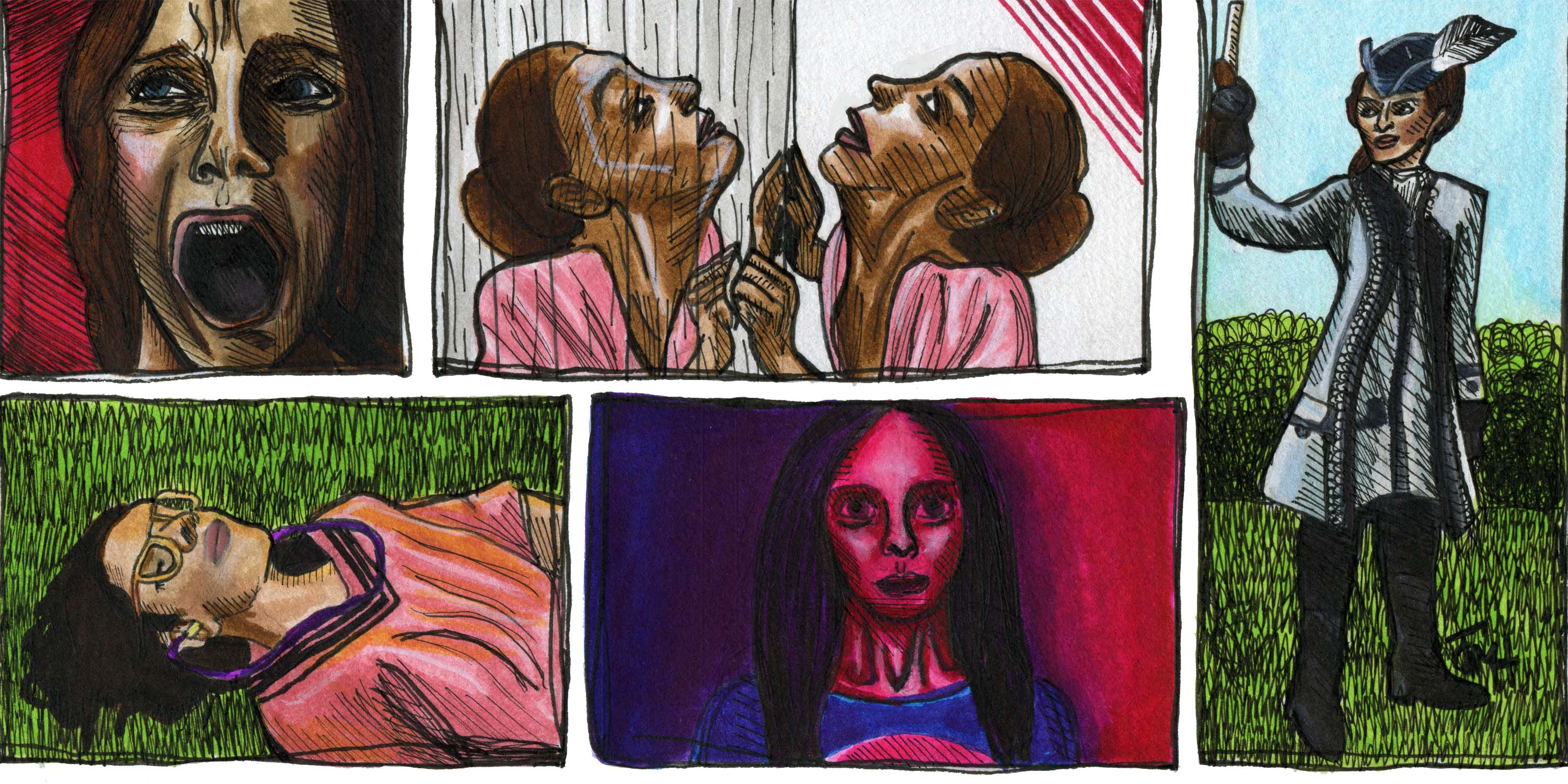 To say 2018 was a good year for movies would be putting it mildly. Films of all kinds — from the big-budget blockbusters Black Panther and A Star is Born to the pull-at-your-bootstraps indies The Miseducation of Cameron Post and Private Life — were able to challenge and innovate notions of genre and storytelling.

It was also my first year as a film critic — which means I watched a lot of movies. Even as I’m typing this it feels as though there are so many things I have missed, which is indicative of just how exceptional this year has been. So, it’s my job — and pleasure — as 14 East’s movie fan in residence to give you a list of the films that surprised, terrified and humbled me the most this year.

30 percent of this list is made up of horror — and that number could have easily been higher due to the sheer number of inventive horror films that were released this year. Panos Cosmatos’ Mandy is hard to pin down. At some points it’s a slow burn portrait of a couple living under the stars and at others it’s a chainsaw-wielding, cocaine-laced fight for survival and to avenge the ones you love — with some surprising moments of humor throughout. But what is consistent is it’s dark, emphatic score, hallucinogenic cinematography and lighting style as well as killer performances from Nicolas Cage and Andrea Riseborough. It’s a film that begs you to come along for a twisted, painful-to-watch journey that leads you to unexpected places.

One of 2018’s most prominent themes was that of the horror of the matriarch. Either what horrors she leaves behind, what horrors consume her or what specific horrors come from being something resembling a matriarch or mother. Ari Aster’s Hereditary follows a family dealing with the demonic remnants following the passing of the family matriarch — and its haunting and building execution cements itself as one of the boldest directorial debuts of the year. It’s also one of the most culturally relevant films of the year — from online campaigns for Toni Collette’s masterful performance (which has largely been ignored in prominent awards) to Twitter memes about the fear of tongue-clicking. It’s both a fantastic horror and a dysfunctional family drama, with incredible performances, sound design and special effects to boot.

Jennifer Fox’s The Tale is hard to watch — and rightly so. In the HBO film, Jennifer (Laura Dern) struggles to come to terms with her childhood sexual abuse. It’s a conversation with her younger self, oftentimes literally, with the use of overt narration and dismantling of the fourth wall which weave her memories and her reality so tight its almost suffocating. Dern’s performance is gutting as Jennifer tries to understand herself back then only to come up empty — both scared to be seen as a victim and unable to go back to her adult life when her buried away traumas finally reach the surface.

In his Palme D’Or-winning film Shoplifters Hirokazu Kore-Ida examines the idea of found family with warmth and tenderness. Shoplifters centers around a poor family trying to survive by any means necessary — whether it’s stealing ramen, sleeping on the floor crowded with your family members, cashing in life insurance checks or doing sex work. The stakes get raised when they take in Yuri, a young girl in an abusive home, as one of their own. Shoplifters makes the audience reckon with their preconceived notions of family, love and poverty told from a stellar ensemble cast. It’s a film that feels like home — not in spite of the characters’ imperfections and ethical conundrums but because of them.

Forty one years after Dario Argento’s cult classic Suspiria, Luca Guadagnino had some big shoes to fill. The highly anticipated reboot follows the same basic story of the original: a young American named Suzy Bannion (Dakota Johnson) goes to Germany to study dance and is met with something far more sinister — but the similarities stop there. The 2018 reimagining is undeniably bold — stretching the runtime to two-and-a-half hours with several intertwining storylines about how power, guilt and beauty are all-consuming. What sets Suspiria apart is how gripping it is — every second of the film is just as intense as it is pleasurable — from the jarring dance sequences to the horrific special effects, makeup and editing mechanics. This is not a story about feminism or female power as many critics have dubbed it — but it does comment on the horrors put upon a divine matriarch and the trials she is forced to go through.

The Favourite is the most outlandish and enjoyable ensemble piece of the year by a wide margin. Yorgos Lanthimos stepped aside from his more art house sensibilities with The Lobster and The Killing of a Sacred Deer to create a bombastic, Sapphic romp that examines the intersection of power and pleasure. Abigail Hill (Emma Stone) is the unseemly cousin of Sarah Churchill (Rachel Weisz) who works as the right-hand woman to the queen of England (Olivia Colman). Once an aristocratic lady, Abigail asks to work for Sarah so she can rise in the ranks once again. What unfurls is an intoxicating competition for Queen Anne’s favor — both in royal court and in the bedroom. But no matter how much power they manage to steal or seduce away the film makes it clear that in the end — no one tops the queen.

2018 was a big year for Netflix — from Alfonso Cuarón’s Roma to Susanne Bier’s Bird Box, the platform has continued to be a powerful production force. While there were many sensational Netflix releases, there was nothing quite like Shirkers in terms of style or concept. Sandi Tan’s lucid documentary is the story of an avant garde film made by three plucky, ambitious young women in Singapore and how it was stolen by their older male advisor. The story itself is heartbreaking and hard to believe — but the snippets of the original films footage are so impressive it showcases what a masterpiece it could have been if it were finished. What’s also exceptionable about Shirkers is that it’s a documentary that sees its subjects as imperfect and human. Tan is confronted by her friends for being an a—hole, so consumed with herself and her art she loses sight of their needs. There’s no sugarcoating — life is messy and people are complicated. It’s a documentary that challenges both the audience and the filmmakers and it’s masterfully executed.

There have been many films about adolescence and coming of age it’s hard to imagine one that can add anything new to the tired conversation. Then Eighth Grade came along — washing audiences with a wave of pained nostalgia for first crushes and feeling insecure in a bathing suit. At its surface Bo Burnham’s directorial debut might seem incredibly dated with its focus on Snapchat and YouTube vlogging — but the film preys on universal fears and insecurities that are ingrained in middle schoolers from any decade. Eighth Grade differs from similar coming-of-age films from the last decade because it showcases an understanding and admiration of tweens rather than making a mockery of them and their devices. Burnham makes it a priority to do away with the “kids these days” mentality and instead tells a funny, sentimental and honest story from a perspective that is always spoken for and not to.

A24 had a big year in 2018 with 15 feature films, many of which were critically acclaimed (three of them are on this very list!). But A24’s stand out film of the year was one of their most ambitious: Paul Schrader’s First Reformed. Reverend Ernst Toller (Ethan Hawke) is a pastor at a small, tourist-y church in upstate New York. His health is bad, he’s preaching to empty pews and his self prescribed journaling and whiskey with Pepto Bismol aren’t doing the trick anymore. His life changes when he meets the pregnant wife of an environmental activist (Amanda Seyfried) and he struggles with what change can be done when God isn’t answering nature’s prayers. It’s beautifully shot and written and Hawke gives a master class in performance. It’s a story about religion told in a unique and unconventional way — bursting at the seams with heart, desperation hope and deeply mesmerizing moments unlike any other film this year.