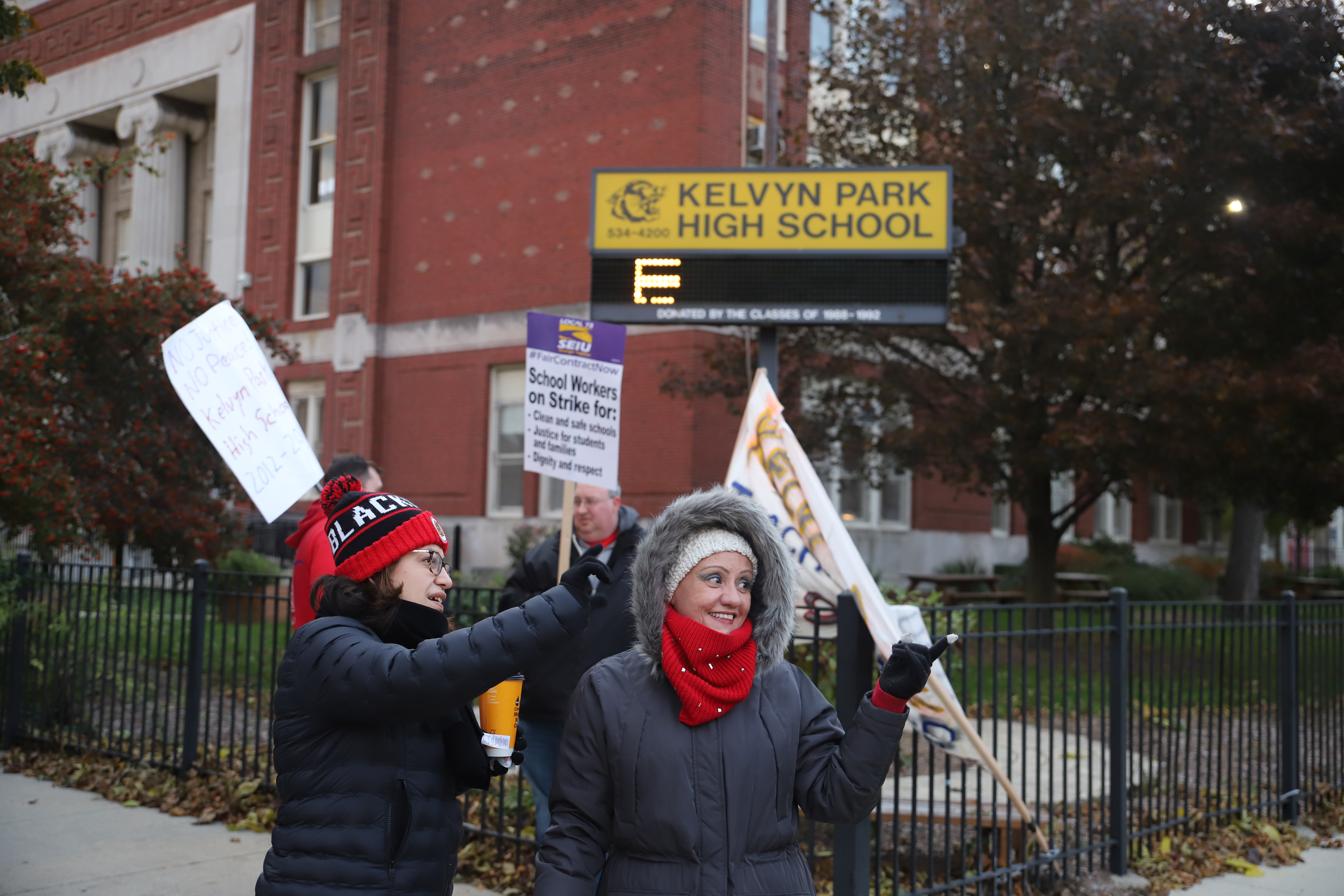 Chicago Teachers Union (CTU) members hit the picket lines again on Tuesday morning after the union and city could not finish contract negotiations and reach an agreement on Monday, marking the sixth day of the strike.

On Thursday, October 17, CTU members went on strike over contract negotiations for a variety of reasons — issues topping the list were overcrowded classes and a need for more support staff (including social workers, librarians and nurses in schools, and lower caseloads for counselors). CTU members are also asking for paid prep time for their classes and affordable housing for students and their families. 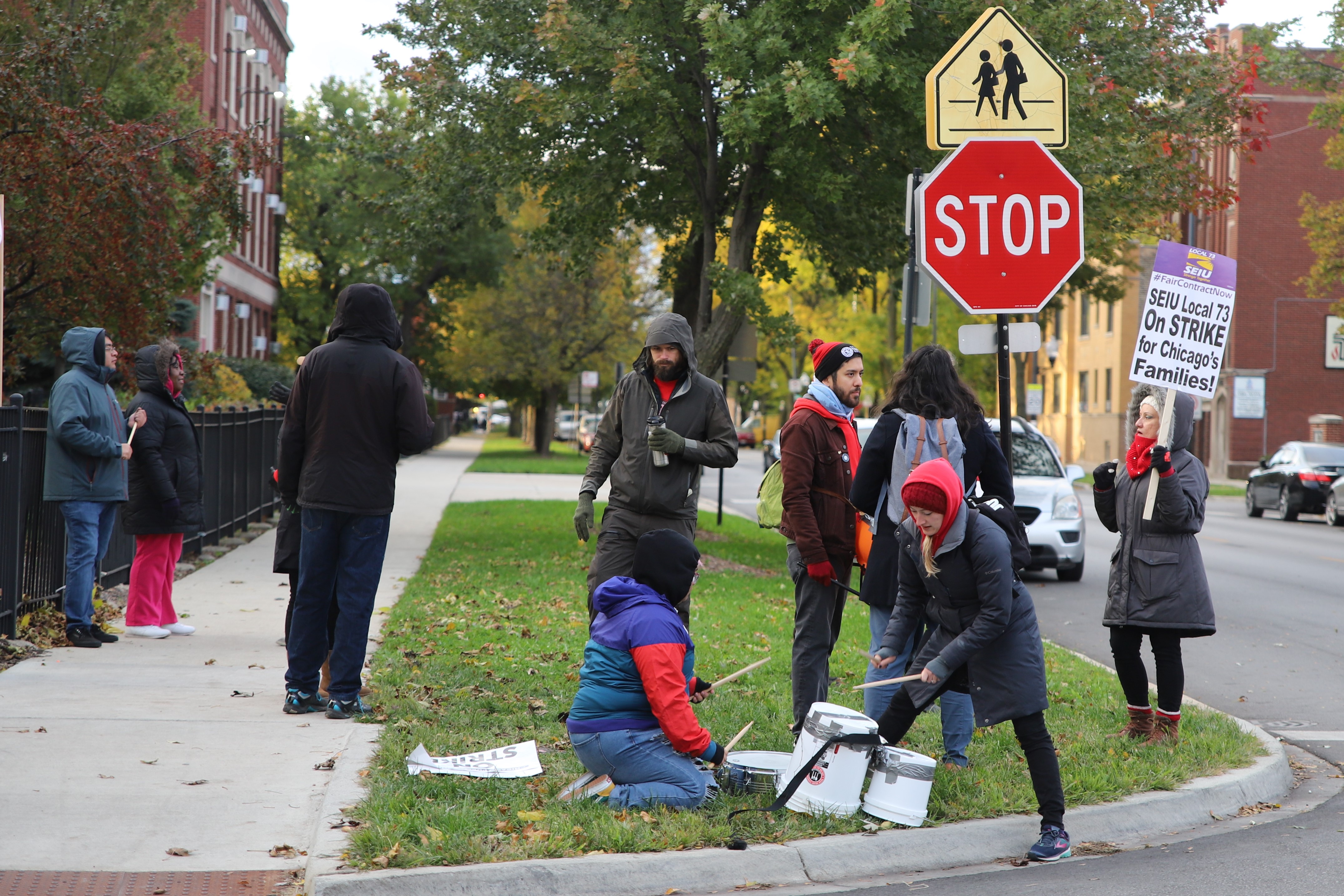 Teachers, staff members and former students of Kelvyn Park High School stood at the corner of Wrightwood and Kostner avenues in Hermosa during Tuesday’s strike. They waved banners, played music over a speaker and set up a table with snacks as they caught the attention of passing cars. The earliest members arrived at 6:30 a.m., and by 7:30 the group swelled to about 30 people.

Those at the picket lines echoed concerns about the direction that negotiations were headed after CTU President Jesse Sharkey said Mayor Lori Lightfoot “dashed hopes” of a quick settlement last night by asking teachers to end the strike and return to their classrooms as negotiations continue.

“After the mayor said go back to work and we’ll negotiate while you work, we’re stalled out now,” said Stacy Hopp, the case manager at Kelvyn Park. “It’s an insult. She had months and months to work with us while we worked and she couldn’t do it, so we’re not going back.”

Hopp said Kelvyn Park faces many issues being addressed in current contract negotiations. She said the school has no librarian, staffs a psychologist one and a half days a week and has a nurse only one day a week.

“Our students come from situations where they need support, and they don’t have the social and emotional supports that they need.”

Hopp has been at Kelvyn Park for 13 years, and she also teaches three classes. She used to get an extra stipend for teaching classes as a case manager rather than a teacher, but this year she got no stipend, so she is teaching the classes unpaid.

Ninety-six percent of Kelvyn Park’s students are considered low-income, according to the Illinois State Board of Education. Demographically, most students are Latinx, as is the surrounding community of Hermosa. The school has a very high number of students learning English as a second language (ESL) relative to other CPS schools.

Ana Rodriguez, who teaches English and ESL, said the number of students learning English in the schools is increasing, partially due to an influx of refugee students.

“We’re getting a lot of refugees. We have students that came from Puerto Rico during the hurricane, Ecuador and Guatemala.”

Rodriguez said large class sizes are an issue being discussed in negotiations that directly affects her teaching.

“It’s a difficult thing when you have 35 kids in a classroom that all have different needs – at least four different levels [of language comprehension] if not more.”

Staff also stressed difficulties at Kelvyn Park regarding reduced budgets due to decreasing enrollment. The school’s enrollment dropped 49 percent from 2014 to 2018, and now sits at 459 students.

“We’ve been basically gutted the past five to ten years,” said Andrew Iverson, who has been teaching at Kelvyn Park for twenty years. “We had close to 2,000 students when I first came here.”

Most passers-by on Tuesday morning honked or shouted in support of the strike. Noe Castro, 9th grade English and journalism teacher and Kelvyn Park’s union delegate, said as the strike continues, he fears the teachers may lose support.

“My biggest worry is that parents and families will start to see it as unnecessary,” Castro said. “I just hope everybody sticks with us and everybody can see this through.”

Beyond Kelvyn Park, presidential candidate Elizabeth Warren made headlines attending the picket line at Oscar DePriest Elementary School in Austin. Warren, who used to be a public school teacher, has been vocal in her support for the CTU. She also released her new K-12 education plan on Monday.

As of 2:40 p.m., negotiations have resumed between the CTU and the city, though only the CTU’s union officers, not full bargaining team, is present. The CTU announced plans to strike through at least Thursday.