The Catholic Question: An Exploration of Catholic ...

The Catholic Question: An Exploration of Catholic Identity at DePaul and Beyond 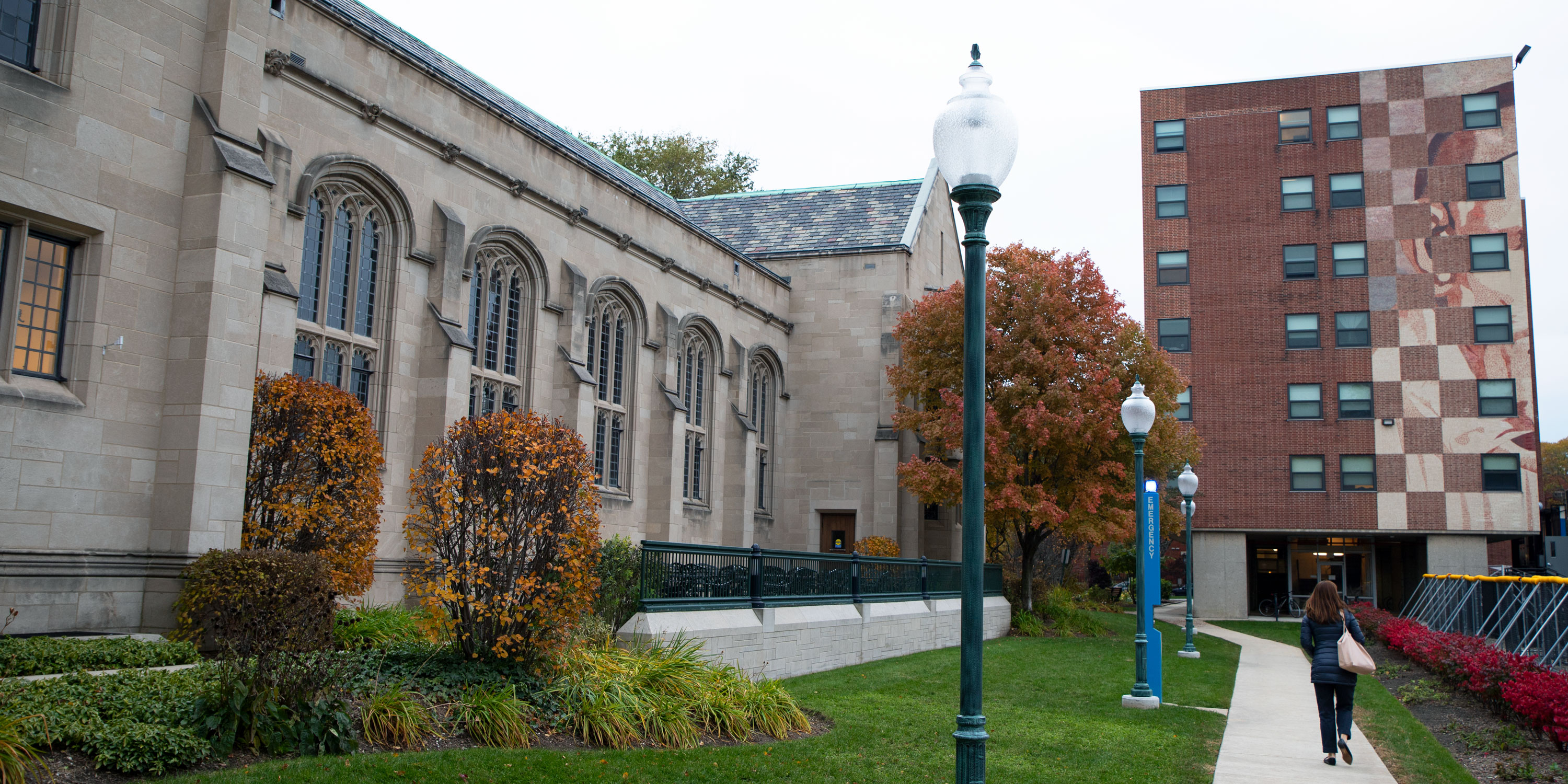 It’s scattered on orientation handouts, posters, DePaul’s mission statement and repeated so often in introductions like these, you likely already have an idea of what’s coming next: DePaul is the largest Catholic university in the country. Yet, for a culture that is increasingly opting out of organized religion, what does this title truly mean for the Catholic identity of DePaul and its students?

The answer seems clear in the numbers: the Catholic population within the U.S. has fallen around 4 percent within the last 10 years alone. Meanwhile the number of self-identified “former Catholics,” has increased 68 percent from 2005 to 2018 according to data collected by The Center for Applied Research in the Apostolate, a research center affiliated with Georgetown University.

According to the site, a “former Catholic” was self-identified as a person “raised Catholic who no longer self-identifies as Catholic.”This trend is also apparent at DePaul as the percentage of Catholic students has fallen from 52 percent in 2009 to 39 percent in 2018 as noted in DePaul’s annual undergraduate enrollment summaries. While the number of freshmen enrolled at DePaul has stayed relatively the same, those who self-identify as Catholic has fallen significantly in comparison.

Fr. Dan Borlik, DePaul’s university chaplain and priest, also pointed out this trend, mentioning that although the Church seems more concerned with the decreasing number of priests, he would like the Church to focus more on the disappearance of practicing Catholics.

Yet, these statistics and quantified data don’t give as much insight to the questions surrounding Catholic identity as the people who form and shape these categories themselves.

While the decrease in numbers is a common trend among all Christians — as the Protestant population has fallen 8 percent in the last 10 years according to a Pew Research Center study — Catholics are also faced with redefining what such a large institution of faith means to them personally. Unlike other Christian denominations who strayed from hierarchical structure during the Protestant Reformation, Catholicism is promoted not only through one’s parents’ beliefs, pastors and theological teachers but also those of the Vatican itself.

Guided by DePaul’s Vincentian mission — which Fr. Borlik describes as “teaching and learning to serve others, and advocating for social justice guided by Catholic social teaching” — Catholics at DePaul are often faced with what Catholic scholar at the Pontifical University of the Holy Cross Paul O’Callaghan called “cultural challenges to faith.” In his article entitled “Cultural challenges to faith: a reflection on the dynamics of modernity,” he describes how “culture [was] formed and informed to an important degree by faith [but] now challenges faith anew to provide answers to questions that have not been asked before.”

With greater recognition and support of traditionally “immoral” Catholic social teachings such as the legalization of abortion and same-sex marriage, today’s Catholic college students can face difficulty in aligning the progressive politics that are more common of young people with their more traditional faith.

However, Amanda Thompson, the director of Catholic Campus Ministry (CCM), noted that Catholicism is broad even in its very definition, which often creates more diversity in understanding its faith and social teachings.

“Catholicism is a big tent and within that tent are a wide variety of ways to practice and understand Catholicism,” she said. “We try [at CCM] to make all students feel comfortable in our space whether they are more traditional or more liberal or somewhere in between in their ideologies. Some may call that progressive and liberal. I would call it inclusive of all, which is what the true definition of Catholicism is: ‘Universal, open to all.’”

According to a Pew Research study conducted in March of 2018, the “Catholic vote,” or percent of self-identified Catholic registered voters, much like the general population, was split almost evenly with 46 percent voting for a Republican and 47 percent voting for a Democrat in state primary elections of 2017.

Yet, no matter how Catholics choose to define their faith, major shifts in religious identity often occur throughout their years as college students and beyond.

Though these shifts are more difficult to quantify, a study published in 2007 by the Social Science Research Council noted that approximately 13 percent of all college students surveyed entirely rejected all religious affiliation with 64 percent of participants reporting “a decline in religious service attendance.”

To Ilana Blattner, the social justice and advocacy coordinator for DePaul’s Catholic Campus Ministry (CCM) office, her own change in religious identity was initiated by DePaul’s mentoring program within the Catholic studies department.

“I completely rejected my Catholic identity throughout my high school years,” Blattner said. “It wasn’t until I came to DePaul that I became an active, practicing Catholic.”

Blattner also mentioned Callaghan’s idea of “cultural challenges to faith” through her own understanding of Catholicism. “As a bisexual woman, there are certain parts of my identity that I struggled to reconcile in a cohesive way,” she said. “Studying theology helped me realize for myself what is true about my faith, and what is misconstrued by human error.”

Blattner said this realization occurred after taking a Catholic studies course to fulfill her religious studies credit. She described the classes she took with Dr. Matthew Maguire and Dr. Scott Moringiello after declaring a double major in Catholic studies as “one of the best decisions she’s ever made.”

Fr. Borlik said this experience is typical of most students, even those who don’t work in the CCM office “Students come here and naturally they’re questioning everything, especially their own background as well as their faith. If they didn’t learn, experience, or arrive at many positions by themselves or along with their friends, those beliefs tend to remain their parents’ version of their faith, not theirs.”

For Rebecca Rodenkirch, a similar situation was true, though her journey to discover her religious identity was quite the opposite. “While being raised Catholic, I never really felt at home in the Church and never felt connected with the scripture being told to me,” she said. “As I went into middle school, I started questioning my beliefs for the first time.”

Rodenkirch said she currently identifies as an atheist, but that her religious identity doesn’t change her view of DePaul’s values or her decision to come here in the first place. “Even though I’m not Catholic anymore, I do value being a good person and helping others who are poor, sick, or just in need of help,” she said. “So, the Vincentian mission still means a lot to me since I want to go into the medical field.”

Experiences like those of Blattner and Rodenkirch could be one reason the number of Catholics at DePaul has seemed to fall so rapidly. For some students, still forming their religious identity, a survey of their beliefs freshman year may not always be reflective of their beliefs later on.

To Fr. Borlik, this decrease in numbers isn’t so much of a concern quantitatively as is the Church’s actual participation. He believes there needs to be more active involvement among baptized and confirmed Catholics in order for the future Church to continue to be relevant in today’s society.

For some students, however, the “future Church” seems to be plagued by questions of how the current Church will address systemic problems, such as the sexual and physical abuse crises by Church leaders. Most recently investigators released a report stating 43 priests in Colorado Archdioceses sexually abused 166 children since 1950.

One student, who asked to remain anonymous, described their change in religious identity as “drastic” after news of sexual abuse was announced in their hometown parish.

“I was in mass when our bishop broke the news that several priests I knew had sexually abused or had inappropriate relationships with minors,” they said. “What hurt most, though, was hearing that one of them was my former youth director from my elementary school. I left at that point in the homily and I haven’t really looked back.”

Thompson said this is common for many Catholics today. “[Students] are heartbroken for the lives that were destroyed and disgusted by the Church’s cover up,” she said. “They love the faith but will not put up with the abuse and will not tolerate this going forward. Some have left the Church, but the ones who stay are invested in changing the culture to being less clerical and more for the good of the people.”

To Fr. Borlik, those who stay have an immense responsibility in making Catholicism appealing, particularly to young people, college students and DePaul’s Catholic identity in general. His main concern is to make sure that Vincentian values are passed on in a way that DePaul students not only understand, but are passionate about, even as major identity shifts in the Church occur.

Although it seems that DePaul’s Vincentian mission and Catholic identity are inherently inseparable in the eyes of the CCM office, students are highly likely to question their religious beliefs at DePaul, and often choose to define Vincentian values not necessarily as Catholic, but as a responsibility and willingness to respect all, regardless of differences.

Jessica Camacho Rivera, the outreach and social media coordinator of Tepeyac, a Latinx organization whose main goal is to encourage conversations surrounding faith, culture and service, reiterated this sentiment.

“I love to hear the new ideas and perspectives that are brought to the table as well as understanding that everyone is different and that is okay,” she said. “We all are humans who deserve to be treated with dignity and respect our unique selves.”