It’s ‘Our Town’ with the DePaul Theatre Unio...

It’s ‘Our Town’ with the DePaul Theatre Union 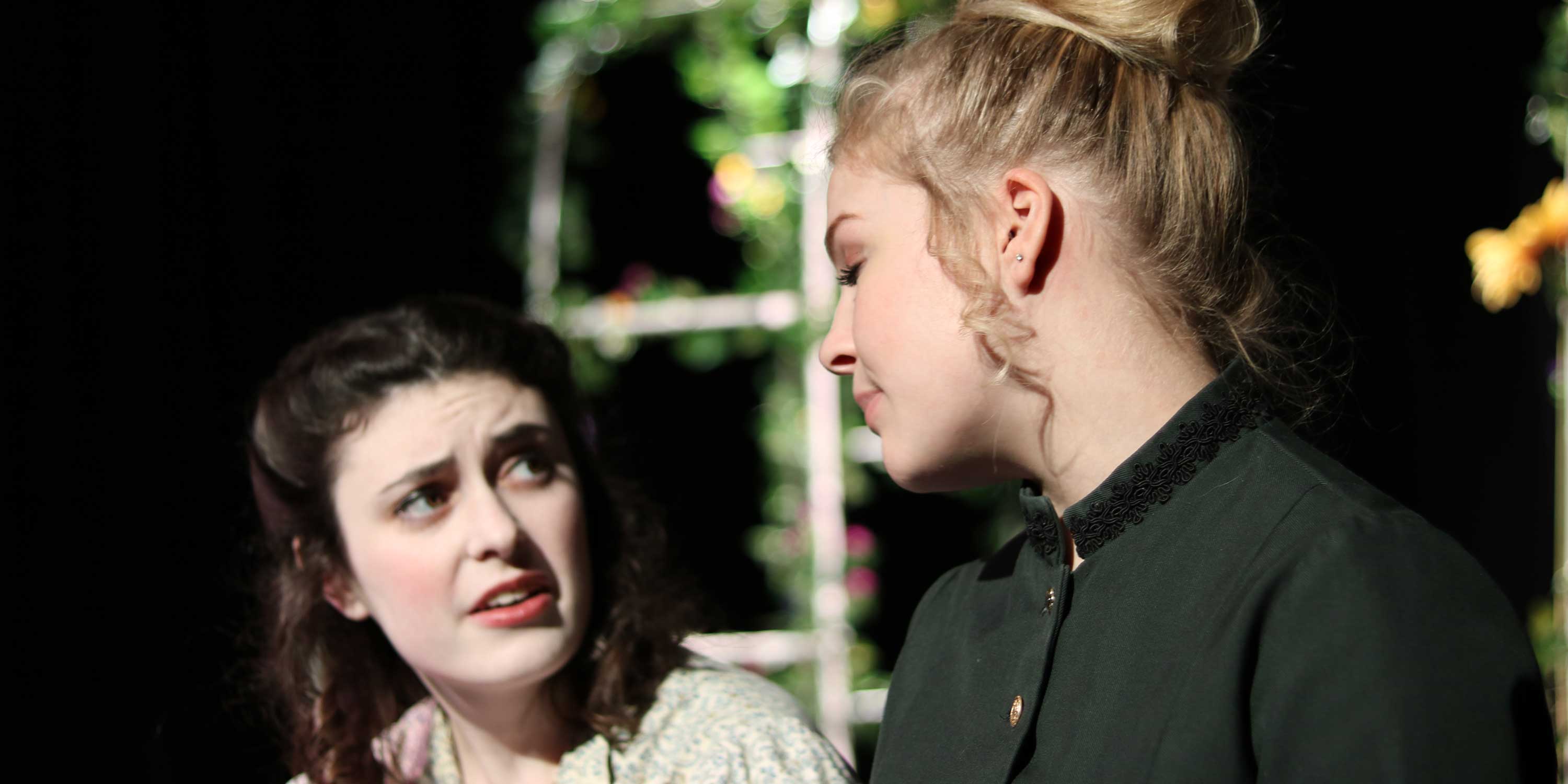 After crawling into bed one night in early February, Ollin Barraza Fernandez got a call from his friend Emma Drover, a communication and media studies major at DePaul. She asked him to come to the Levan Center right away.

He got dressed and walked over to the Lincoln Park building from his dorm room. Drover was at a DePaul Theatre Union (DTU) rehearsal and needed him for something.

Upon his entrance, the members of the production cheered. On the spot, Fernandez was given a schedule, a script and two roles. The team had lost a couple of cast members and were in need of someone to fill the shoes of Howie Newsome and Simon Stimson, a milkman and a drunk.

No stranger to the stage, Fernandez fits right in with the DTU community. Both his middle school and high school in Dallas, Texas, were performing arts establishments, and he worked on projects there. A unique opportunity was Crossing the Line, where Fernandez, among other high school students, conducted interviews at the border of Texas and Mexico as well as over Skype to create an original play. Fernandez’s passion for live performance continued, even as he entered DePaul as a film and television major with a directing concentration.

DePaul was the only school where Fernandez applied as a film and television major. On applications to all other schools, his intended major was acting. After starting at DePaul, Fernandez realized his heart was still on stage and while expressing that passion through DTU, he knew he had to work toward a degree in the field. Fernandez decided to apply to The Theatre School at DePaul (TTS). Amidst rehearsals for Our Town, Fernandez prepared for call backs at TTS and waited with high hopes for word of acceptance.

However, preparing for opening night kept him busy. “The people are fun to be with,” said Fernandez. “We can be very professional but we can also like, randomly joke around a bit, which is nice.”

As an organization filled with students from all colleges at DePaul, the cohort of actors, crew members and production teams of the DTU are there to have a good time. For them, it’s not about getting a degree or a Bachelor of Fine Arts, as the students at TTS are aiming for — it’s about the fun and the community. 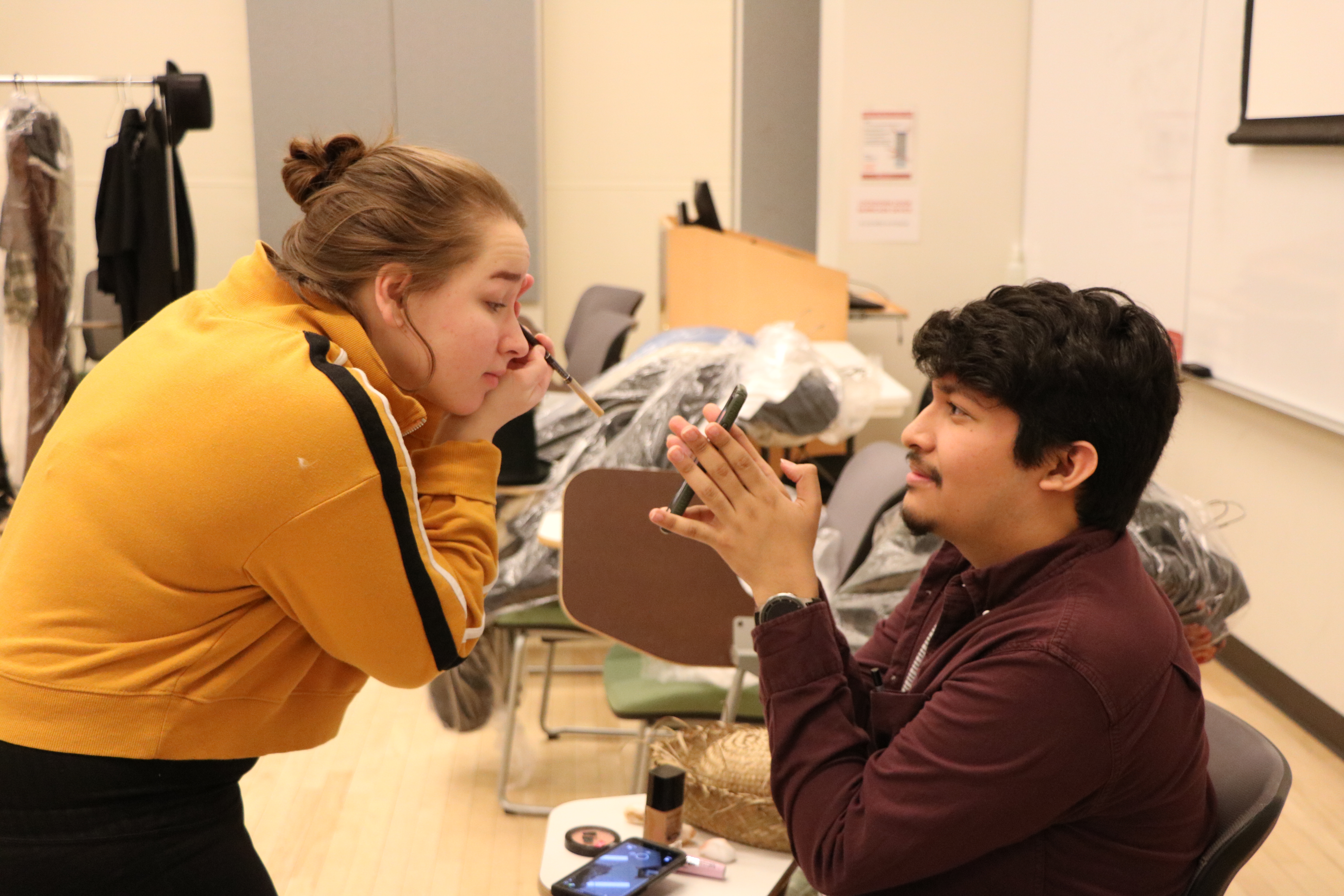 Anna Skladany (left), studying animation, and Ollin Barraza Fernandez (right) make use of what they have in order to do their makeup in the green room. Hannah Coyle, 14 East

Grace Ryan, a vocal performance and music education major, played the role of Mrs. Soames in Our Town. It’s not always easy to find friends on campus with similar interests, especially as a freshman, Ryan said. With the DTU, she found her group.

In January, scripts were handed out and rehearsals began. Last year, Maddi Smith, co-vice president and technical director of the DTU and journalism and sports communication double major, proposed Our Town as a potential project for the 2019-20 school year. She had a vision and this March, it came to life with her at the head of the show as the director. With a cast of 12, a crew of 5, and a production team of 4, this student-led project was a joyous handful.

The Webbs and the Gibbs are two families living in Grover’s Corners, New Hampshire, in the early 1900s. Through the eyes of the narrator, referred to as the Stage Manager in Our Town, these families experience seemingly ordinary lives complete with childhood growth, love and death. In the first of three acts, Emily Webb, played by Riley Reed, falls in love with the neighbor boy, George Gibbs, played by Ben Stumpe. Come act two, the couple says their vows with a small audience of family, community members, and the Stage Manager. The final act opens with the unveiling of the death of Emily who has died in childbirth. Mixed with wit, flashbacks and lessons, Our Town tells a conventional, small-town U.S. story. 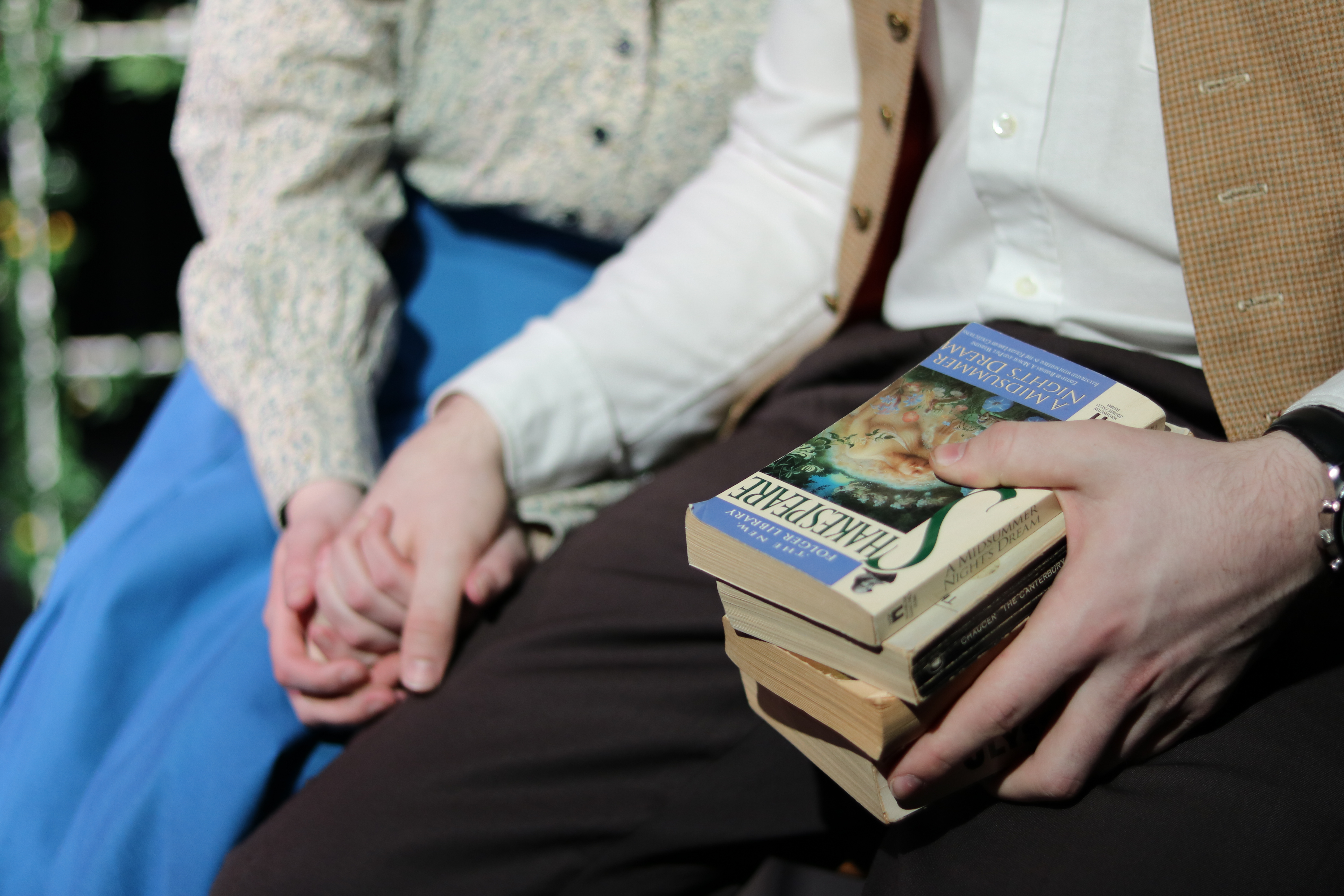 Each week leading up to the performances, the team met three times in the Levan Center on DePaul’s Lincoln Park Campus. Since the organization is not associated directly with TTS, they had to make use of unconventional spaces for rehearsals. Until tech week arrived, desks and chairs were often moved around in classrooms to make space for Our Town to be created.

Tech week arrived on February 28. The time had come for all the technical elements of the show to be ironed out. The cohort moved to a small, black box theatre in TTS. With just a week before opening night, the crew took advantage of every moment they had to set up lights, sound, scene changes and every technical aspect of the production.

March 6 came and the group was ready for the first performance. Smith had a small table set up outside the door to the theatre. TTS students bustled around the third floor as they rushed to their own rehearsals. One student could be heard down the hallway, quietly singing show tunes.

Another young man quickly walked past with an orange ladder. Our Town is intended to be performed with minimal set and props. Two of the statement set pieces are a pair of ladders, which imitate the different levels in the Webb’s and Gibbs’ homes. In different scenes, the audience may find George and Emily, in their respective “homes,” having a conversation atop a couple of ladders.

Though the group does not have an official ticket system, family and friends rushed to reserve their free tickets, as the performance space only holds about 30 people. Each of the three shows, performed March 6, 7 and 8, had a waitlist – if audience members arrived early enough, they could claim the spots of those who did not show up. The cast performed for a full house at all three performances.

As the seats began to fill up, down the hall the cast had gathered in a makeshift green room. The space they occupied was larger than the one they performed in, but it was mostly empty, except for some scattered chairs and a couple of couches. Peyton Gatza, music director of Our Town and actor in the show, claimed control of the speakers. After many scuffles about what music the cast wanted to play while they got ready, they finally agreed on show tunes. The cast members sang and danced to songs from Waitress: The Musical, Next to Normal, and The Last Five Years. 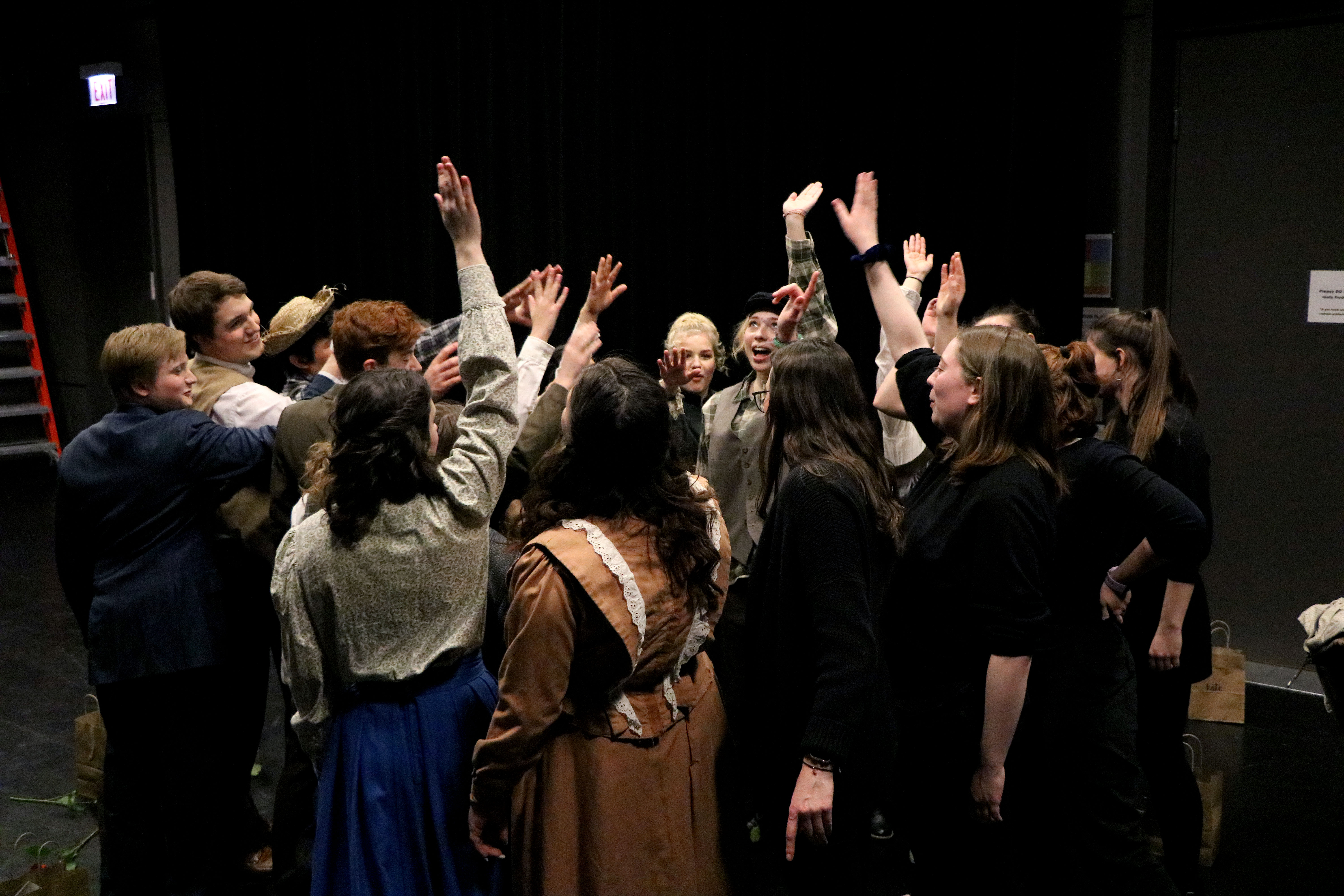 Before opening night, the cast and crew gather. Smith leads the group in one last hurrah, before places are taken. Hannah Coyle, 14 East

Cassidy Delahunty, Our Town stage manager and biology major, made several trips into the green room on opening night. “House opens in five!” she said. The cast readied themselves. As the crew made their way into the green room to join the cast, everyone circled up.

Counting down from eight, the cast began to “shakedown.” They ran through the songs, warmed up their vocal cords, and joined hands, sending a squeeze around the circle.

Delahunty and Smith gathered the attention of the group. They wanted to distribute opening-night gifts. Inside the paper bags with calligraphy-printed names were little ladders (in remembrance of the set piece), strawberry soda, a little note and Oreos. The celebration did not stop there. Smith had a story to tell.

“I was in my first show when I was in sixth grade,” she said. “That was 10 years ago… Before the opening night of my first show, all of the cast and crew received roses, so I wanted to share that tradition with all of you.”

She walked around, handing roses to each individual member of the production. The cast worked for two months with the production team to ready the show and they had made it to opening night. 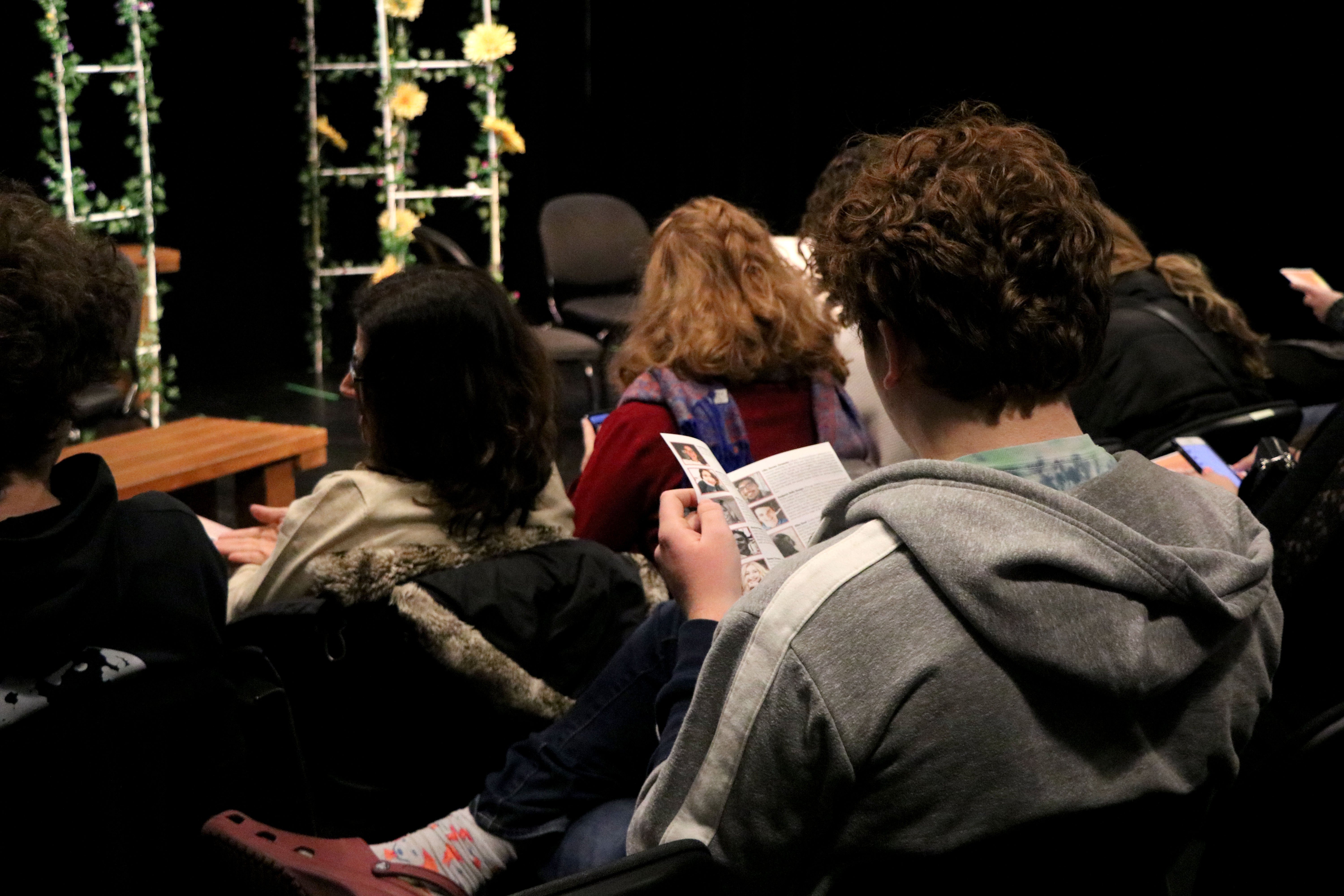 As the audience arrived, the cast and crew took their places. They were about to enter Grover’s Corners, New Hampshire. With a bunch of enthusiastic DTU members and no theatrical mishaps, the production of Our Town was a success. “Many audience members were crying by the end,” said Stumpe. “The performances got better and better night after night.” As Our Town wrapped up its final night, Fernandez received news he had been patiently waiting for. He had been accepted into one of the most competitive acting conservatories in the nation – The Theatre School at DePaul.