5 Video Games to Play During COVID-19

5 Video Games to Play During COVID-19 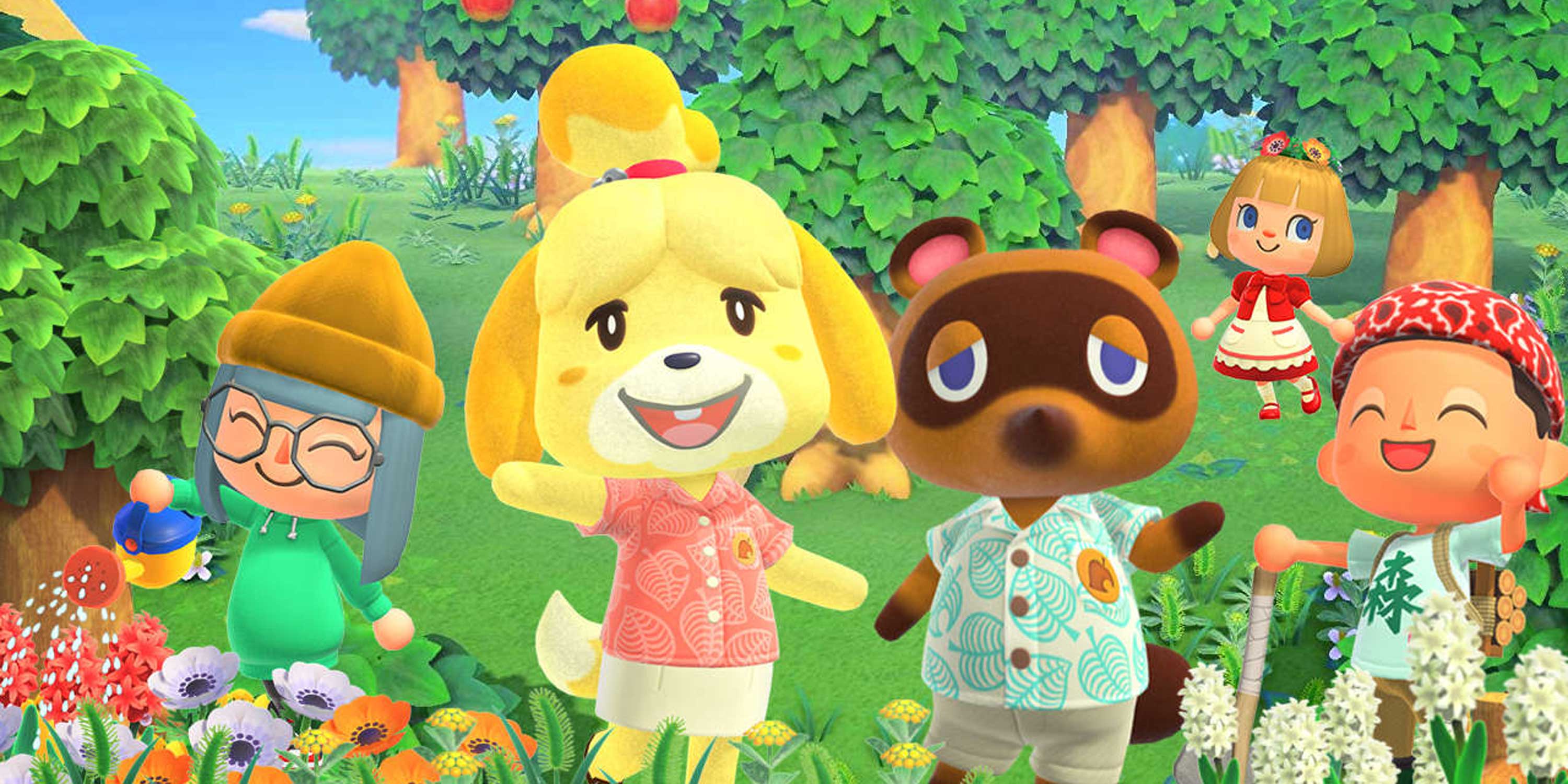 It may seem hard to make social connections right now.

We’re all stuck at home in the middle of the COVID-19 pandemic. It may feel stressful or boring. The social interactions we all desire feel minimal and restricted right now. We need something to pass the time, but also engage us.

Many, it seems, are turning to video games. In March, video game streaming site Twitch saw viewership increase by 23 percent. Meanwhile, that same month spending on video games was up by 11 percent compared to the same time last year, reaching $10 billion — setting the record for the highest monthly total.

This may be because playing a video game with a friend, or even a stranger, can engage social connections, while filling the extra time we find ourselves having. It can also satisfy our needs for absorbing stories and challenge our perception of life.

“Video game” is a vague term that barely covers the medium. It seems wrong to define Super Mario Bros, Grand Theft Auto and What Remains of Edith Finch with the same word. Is Depression Quest even a game? What about Goat Simulator?

No matter the form it takes, video games are a medium of art that can satisfy users in a variety of ways.

Sony, Nintendo, and Microsoft appear to be capitalizing on this time, and currently have extensive game sales. The PlayStation 4 exclusive classics Journey and Uncharted: The Nathan Drake Collection are free on PlayStation store.

Sony has two big sales happening right now: The “Big in Japan Sale” features some of the most popular PlayStation 4 games in Japan and the “Games Under $20 Sale.” This includes Far Cry 5 for 75 percent off, Life is Strange 2 – Complete Season for 60 percent off and Rise of the Tomb Raider: 20 Year Celebration for 70 percent off.

The Nintendo Switch has the “Action & Adventure Sale” with up to 75 percent off Ubisoft games including Assassin’s Creed: The Rebel Collection and the South Park series.

Xbox One also has a sale on the Assassin’s Creed series.

Here is a list of current games (and one not so current) that are getting the attention of the DePaul community. The games on this list are all pretty different, and none of them are on sale, but they might make time spent at home a little bit easier.

Animal Crossing: New Horizons is a life simulation video game developed and published by Nintendo. It is the fifth game in the Animal Crossing series and was released on March 20, 2020.

The game hit the market right as many stay-at-home orders across the U.S. began. It is both a commercial and critical success. The game sold 5 million digital copies in its first month and broke the record for the most digital units sold in a single month for the Nintendo Switch.

“I’ve been looking forward to this release for over a year. I saved up for a Switch Lite just to play the game,” said Ava O’Malley, a sophomore at DePaul. “I’ve been enjoying it because it lets you explore an imaginary world, but also interact with friends.”

Similar to other games in the series, New Horizons is a nonlinear life simulation game played in real time. Essentially, you create a customizable character who explores a deserted island and develops it into a community. The game is open-ended and allows players to customize and create at their own pace.

The weather in the game adjusts to the seasons of the Northern or Southern hemispheres depending on the player’s real-world location. The island community is inhabited by anthropomorphic animals who interact with your character. Think of it like The Sims but with animals.

“You get to design your house, populate your island, wear cool clothes and harvest materials to build cool stuff,” said Jon Vedova, a senior at DePaul. “As mundane as it may seem, catching a new species of fish to add to the museum or finding a new DIY recipe to building something cool yields a euphoric high that fuels longer gameplay.”

Animal Crossing: New Horizons supports local and online co-op gameplay. Players can visit friends’ islands and interact together. It is a game that can attract hardcore and casual gamers. It is also a great game for younger family members or significant others.

“My girlfriend and I have heated debates about how we should customize our island and impress our friends when we invite them over via online play,” Vedova said.

Set in the dystopian metropolis of Midgar, players control a mercenary named Cloud Strife. Working with an eco-terrorist group known as AVALANCHE, they oppose a powerful megacorporation known as Shinra, who is apparently using the planet’s life essence as an energy source.

That summary barely scratches the surface of a plot that is intricate, a bit confusing, and endlessly interesting.

A remake of the classic game was announced in 2015 and finally released on April 10, 2020. The gaming community was both excited and nervous about the remake of a game already considered one of the greatest of all time.

“We just wanted them to honor how fantastic the original was,” said Scott Babbitt, an Oak Park resident and lifelong fan of the series.

Every element of the game was remade, using real-time polygonal graphics instead of the pre-rendered environments of the original. The character models and graphical style are new designs and the crisp graphics of the 3D world makes Midgar truly come to life.

The action RPG combines real-time combat with strategy and role-playing elements. Players can play entirely in real time or make strategic decisions and use special abilities. They can also switch between party members at any time, utilizing each party member’s individual skills.

The complete reinvention of the first chapter of this classic game is a must-play experience for Final Fantasy fans.

“The original is one of my favorite games of all time. I was really looking forward to this remake and it’s so good,” Babbitt said. “It surpassed my expectations. I needed it to be great and it was phenomenal.”

Call of Duty: Warzone is a free-to-play battle royale and first-person shooter game. It is the latest in the cultural phenomenon of the battle royale genre popularized by Fortnite: Battle Royale and Apex Legends. A battle royale game is an online multiplayer game that blends survival, exploration and scavenging elements with last man standing gameplay.

Call of Duty: Warzone allows online multiplayer combat among 150 players set in the fictional city of Verdansk, loosely based on Donetsk city in Eastern Ukraine. The game features cross platform play, meaning that PC, PlayStation 4, and Xbox One players can all go head to head.

“Playing Call of Duty: Warzone with the squad is an absolute riot,” Vedova said. “The mixture of explosions, banter, gunfire, and laughs that occur is nonstop fun. With 150 people dropping into one map, trying to be the last team alive calls for strategy and precise aim.”

The game has continued the success of the battle royale genre. It was downloaded by six million people in the first 24 hours and surpassed over 50 million downloads in the first month.

“The in-game situations vary every time you drop in, which adds to the addictiveness,” Vedova said. “The game offers many opportunities to come back after death and this keeps you engaged and always wanting to come back for more.”

System: PlayStation 4 (Xbox One and Nintendo Switch as early as 2021)

The 15th entry in the MLB: The Show franchise was released worldwide on March 17, 2020 on PlayStation 4. The series has always been a Sony exclusive, but on December 9, 2019, Major League Baseball and Sony Interactive Entertainment announced that for the first time ever the game will be released on additional consoles. There has yet to be an announcement on the exact date, but the statement indicated it will be as early as 2021.

This is huge news for baseball gaming fans. MLB: The Show has been the best baseball video game available for over a decade. The other option, R.B.I. Baseball, has yet to match the commercial or critical success of MLB: The Show. A best-selling and critically acclaimed franchise, MLB: The Show is arguably the best and most realistic sports video game on the market.

“I love how encompassing the whole gameplay experience is,” said Jason Flam, a senior at the University of Illinois at Chicago. “It’s really amazing how realistic everything is, and there’s nothing quite like having the ability to create your own player or take over a franchise and lead it to glory.”

The cover athlete for MLB: The Show 20 is Chicago Cubs infielder Javier Baez.

For the first time ever, Minor League Baseball players are fully licensed and have their names and likenesses featured in the game. In previous games, some of the players had generic names and designs.

Without real baseball to watch, MLB launched a 30-team virtual Players League with each club represented by one of its players. The 29-game regular season ran through the month of April, with the top 8 teams advancing to the postseason. On May 3, Tampa Bay Rays pitcher Blake Snell beat Chicago White Sox pitcher Lucas Giolito in the championship series. The championship was televised on ESPN with Snell, Giolito, and announcer Robert Flores virtually commenting on the game.

In the midst of newly released games, this classic series is one of the best multiplayer games for a casual setting.

Mario Kart 8 Deluxe is an enhanced Nintendo Switch port of Mario Kart 8. This version includes all the additional content from the original Wii U game, as well as enhanced graphics and gameplay. Six additional playable characters were also added to the roster.

Along with Animal Crossing, this is a great game to play with a younger sibling or significant other who does not typically play video games. It has much more action than the relaxing escapism of Animal Crossing and the race tracks are all colorfully engaging.

“It’s fun and simple, anybody can pick it up,” Babbitt said. “But the controls are intricate enough to make the game competitive.”

Mario Kart 8 Deluxe appeals to both competitive gamers and casual gamers. Anybody can pick it up, but it is far from easy to master. This version of the game offers an abundance of customizations and vehicle options. These little changes can make a big difference for competitive play, or they can be completely ignored, and the experience will still be satisfying.

The game is a commercial and critical success. It is currently the best-selling Nintendo Switch game of all time.

Mario Kart 8 Deluxe may not be the game you throw 100 hours into, but it will be the go-to game at a party in the post pandemic future.

“I enjoy playing it in a casual party setting,” Babbitt said. “It’s really fun to play against friends.”

This is not an easy time for anyone. So much is out of our control. However, we can control how we spend our time, focusing on things that bring us joy. Video games allow us to escape our reality and discover new worlds. The games on this list take you to imaginary lands, allow you to connect with friends and offer a break from the pandemic.