The Sullen Girls of the Music Industry

Volunteering During a Pandemic..

The Sullen Girls of the Music Industry 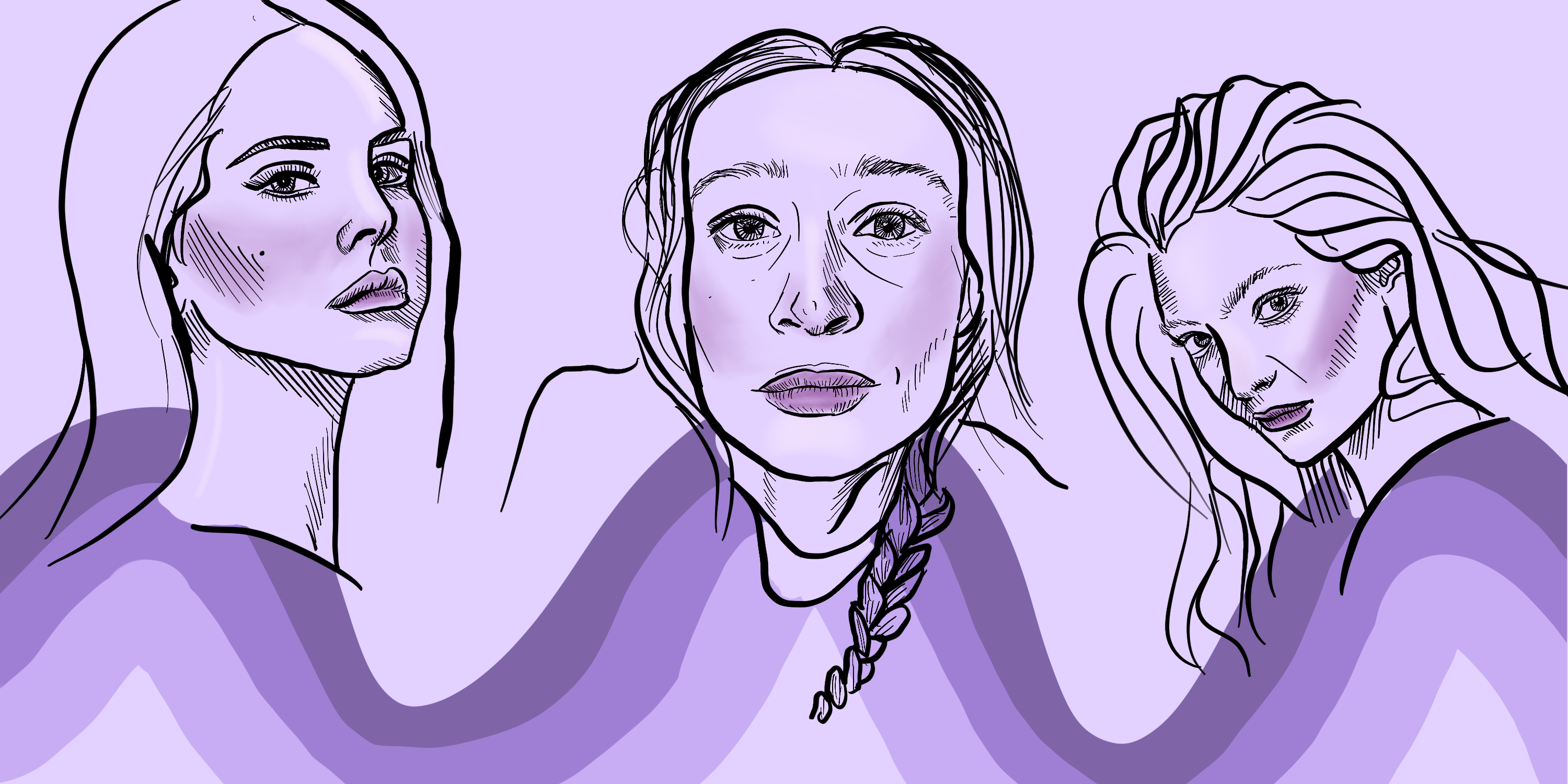 “I didn’t prepare a speech, and I’m sorry, but I’m glad that I didn’t, because I’m not going to do this like everyone else does it,” 19-year-old Fiona Apple began after taking the stage at the 1997 MTV Video Music Awards.

Apple had just been awarded the VMA for Best New Artist, fresh off the success of her debut studio album Tidal. It was a narrative played time and time again at award shows: a young, talented ingénue breaks out into the mainstream, and thus begins her upward trajectory in show business.

“See, Maya Angelou said that we as human beings at our best can only create opportunities,” she said. “And I’m going to use this opportunity the way that I want to use it. So what I want to say is, everybody out there that’s watching, everybody that’s watching this world? This world is bulls—t. And you shouldn’t model your life about what you think that we think is cool, and what we’re wearing, and what we’re saying and everything. Go with yourself. Go with yourself.”

Retrospectives on Apple and her time in the public eye often reference this moment; many artists in her place would use the acceptance speech to gush over the milestone and cry happy tears, but she didn’t buy it.

“The line was, ‘This world was bulls—t’ and she was talking about the music industry,” said Dan Bashara, an adjunct professor in DePaul’s College of Communication. “She’s in an award show and she’s like, ‘This award is bulls—t,’ but it got taken as like, ‘The world is bulls—it.’ And I think that speaks to a larger cultural tendency whenever women are being critical to be like, ‘Oh s—t, she’s being hysterical.’”

In the music industry, in which artists live and die by their image and the brand they attempt to sell, Apple was a curious case.

Obviously beautiful, but with a very noticeable chip on her shoulder; edgier than Mariah Carey and Celine Dion, but with more restraint than Courtney Love or Kathleen Hanna. Her lyrics dripped with sarcasm, but also a deeper emotional pain.

“I think they didn’t even know what to do with her, in the best way,” said Kate Lacroix, a former music writer based in Colorado. “I mean, she was beguiling… I think she blew people’s hair back because she was supremely powerful.”

Perhaps the best label for Apple lies in the lyrics of her debut album, where she sings, “Is that why they call me a sullen girl?”

The late 1990s was a fruitful time for artists of Apple’s caliber; women who made more personal, stripped-back music compared to acts like Indigo Girls, Joan Osborne and Alanis Morissette.

The culmination of this sub-genre was Lilith Fair, a traveling music festival partially founded by Sarah McLachlan. The festival consisted solely of women artists and women-led groups and was named after the Jewish mythological figure Lillith, Adam’s first wife who refused to be subservient.

The early 2000s, however, saw a rise in teen-oriented pop music, with artists like Britney Spears and Christina Aguilera dominating pop culture of the time. For the time being, it seemed that Apple and her contemporaries had lost their momentum.

Apple still created music, releasing albums in 2005 and 2012 to critical praise, but kept a relatively low profile compared to when she first ascended to fame.

In the over two decades since Apple’s ascent into stardom, a steady new crop of female artists have made names for themselves, armed with introspective lyrics and a distinctive style to their compositions.

Lorde, who is considered by some to be responsible for changing the course of pop music in the 21st century, arrived on the scene in 2013 at the tender age 17 with “Royals,” a song that celebrates minimalism in both its style and lyrical content.

Fed up with the over-saturation of materialism and excess found in the Billboard Top 40, “Royals” dressed down the glorification of conspicuous consumption, and established Lorde as an alternative and sullen prodigy, like Apple before her.

The archetypal “sad girl” has not always received a positive reception after breaking through the mainstream.

When Lana Del Rey first broke through in 2011, her deep, distinctive vocals, permanent pouty face and cinematic debut album Born to Die — released the next year — propelled her to stardom.

The longer she spent in the public eye, the more critiques of her music and image began to surface. Naysayers were particularly bothered by her use of a stage name — a decades-old practice — and the perceived lack of authenticity surrounding her career.

“I personally think authenticity is the dumbest thing we ever came up with as a yardstick for measuring for any kind of art,” Bashara said.  “Stars all have personas and with male artists, we feel comfortable allowing a line to exist between, look at someone like Justin Timberlake. He can be this kind of swaggering sex machine in his music, but we still think of him as like a decent relationship man in his private life. We don’t let women have that complexity.”

To make matters worse, Del Rey’s 2012 performance on Saturday Night Live was not a star-making triumph, but rather a pitchy, confusing trainwreck.

She bombed, and those who had written her off as a phony, an industry plant, and an artist not worthy of our time and respect were vindicated.

“I definitely don’t think [Del Rey] was an industry plant,” said Amelie Tsoungui, a DePaul junior and longtime fan of Del Rey. “I think a lot of people misunderstood who she was when she first came out. “

It is important to note that Del Rey gained international attention while in her mid-20s, having several years on Apple and Lorde when they first made it big.

While this is not to suggest that her older age — for the entertainment industry’s standards — was the sole reason she was subjected to criticism, she also did not benefit from being viewed as a prodigy as the aforementioned artists did.

“We have such a different metric for how we judge the persona of a female or male artist,” Lacroix said. “…I’ve been following [Del Rey] her since her ‘Diet Mountain Dew’ days, [and] I thought she was incredibly sharp and presentational.”

Furthermore, to write off Apple, Lorde, or Del Rey as “moody” or “sad” ultimately trivializes the emotion behind their work. Themes discussed in their music include mental illness, self-loathing, rape and existential stress, among others.

By compartmentalizing such emotional honesty as the work of a “moody” artist, it suggests that the artist is only being seen for the label given to them by the industry, and not the quality of their work.

Armed with Apple’s ethereal vocals, Lorde’s wise-beyond-her-years approach to pop, and Del Rey’s commitment to a visual aesthetic, Eilish is Generation Z’s answer to the moody female archetype, taking cues from hip hop and electro-pop in her music.

“The ‘90s when Fiona Apple became big was, you know, it was a period of like a lot of — for lack of a better term — angry, moody women [like] you know, PJ Harvey, Tori Amos and Liz Phair,” Bashara said. “I think that was the thing. And then the 2000s happened and suddenly it was like all dance-pop, it had to be Britney Spears. So in a way, that 2000s dance-pop moment might be like the anomaly… I guess Billie Eilish reminds me of a pop version of all of those ‘90s singers.”

Like Del Rey before her, Eilish has also been subjected to skepticism about her authenticity and her meteoric rise to fame.

Unlike Del Rey, however, Eilish’s debut studio album When We All Fall Asleep, Where Do We Go?, was met with critical acclaim. Eilish swept the 2020 Grammy Awards, becoming the youngest artist in history to win the “big four” categories: Best New Artist, Record of the Year, Song of the Year, and Album of the Year.

Like Apple and Lorde before her, she is being hailed as a prodigy, achieving extreme success and acclaim before the age of 20.

What’s more is that her personal aesthetic — comprised of baggy, oversized streetwear — has been hailed as a feminist statement against those who wish to objectify her.

“Women are kind of standing up for themselves and showing that a lot in music and in films, even,” Tsoungui said. “I think it’s great how the tide has kind of turned, but there’s definitely still those moments where people are kind of still s—tting on artists… I’m not in music, but I would never judge someone for the way they make their music because that’s home to them.”

Eilish’s ascent to pop superstardom is indicative of a larger cultural shift towards more cynical, less surface-level female artists. And she isn’t the only one benefitting from this shift.

After shaking off the bad press that initially dogged her career, 2019 proved to be a big year for Del Rey, with her album Norman F—king Rockwell garnering widespread praise from critics, and earning a nomination for Album of the Year at the 2020 Grammy Awards.

The album is Apple uninhibited, with the songs following a stream-of-consciousness lyrical style and an experimental production that would raise Brian Wilson’s eyebrows.

Perhaps the comeback of the sullen artist has something to do with the largely uncertain times in which we live, where cynicism and publically voicing dissatisfaction appear to be in style.

“We owe everything to the Lilith Fair crowd, we would have nothing if it weren’t for them today,” Bashara said. “Those women were absolutely trailblazers in the fights that they had to be able to stake out territory where they could just be like, ‘This is my art, f—k all of you.’ We owe everything to that.”

But perhaps people are beginning to realize that Apple was right all along when she boldly stated that maybe everything really just is “bulls—t.”

“I think that there is always hope when someone comes along and doesn’t fit the mold and still triumphs,” Lacroix said. “And so anytime we can expand people’s understanding of what a female artist is, you know, that’s a big thing.”