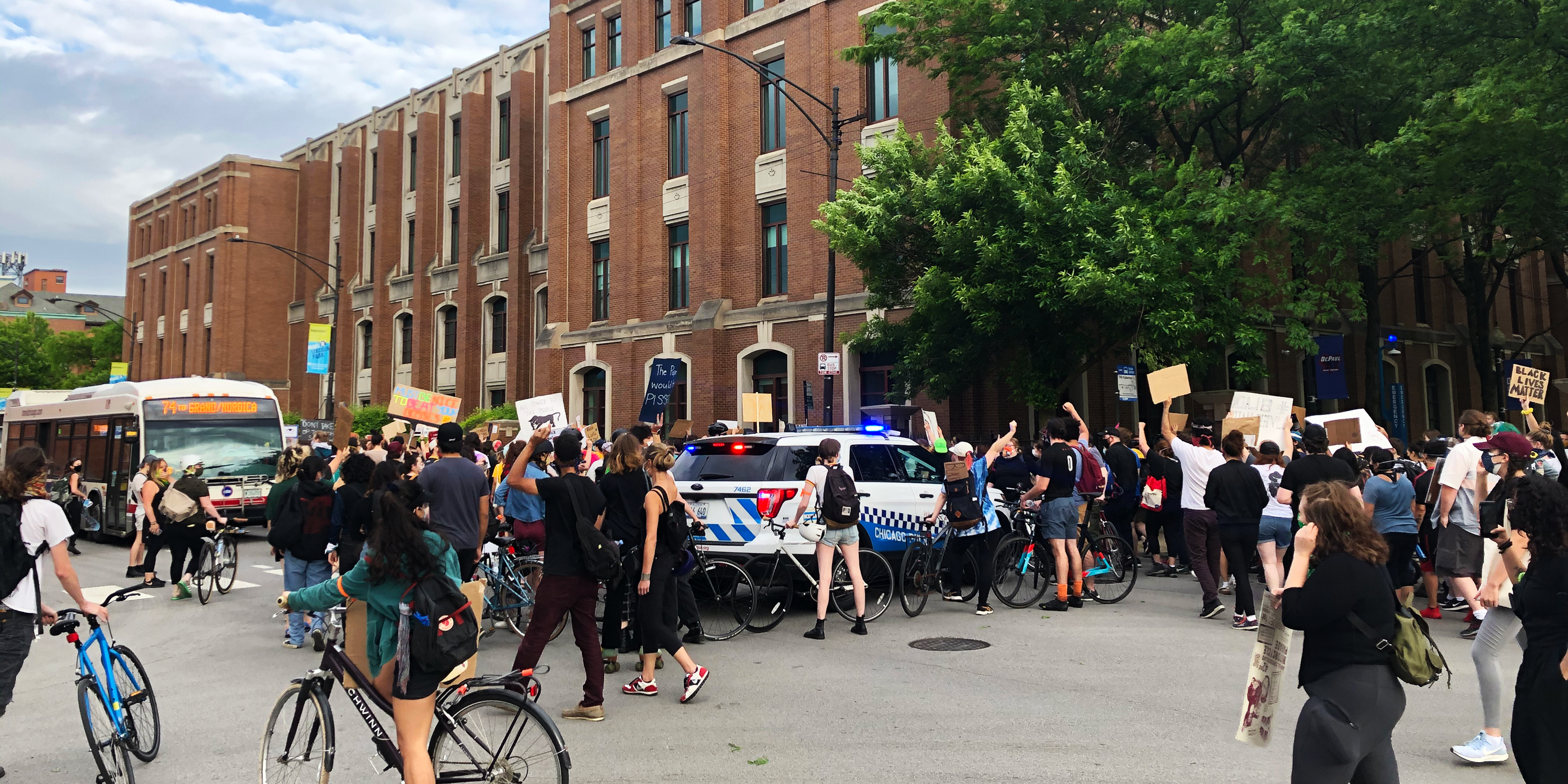 On Wednesday, a crowd of more than 100 people gathered on DePaul’s Quad in Lincoln Park to protest the University’s ties to the Chicago Police Department (CPD) and the Fraternal Order of Police (FOP), and to call for divestment and detachment from the police and prison systems.

Fae R., whose last name has been abbreviated due to retaliation for her activism, was one of the central organizers of the protest, alongside a coalition that included Students Against Incarceration, Chicago Area Peace Action DePaul, DePaul Socialists and Campaign Nonviolence DePaul. Fae has been working alongside activists with Black Lives Matter Chicago and similar groups to organize demonstrations throughout the past several weeks, including the march at Union Park last Friday, and saw it as important to bring that momentum to DePaul.

“I was looking at Minneapolis and how their city council didn’t really feel the pressure to defund or divest from police until major universities took that first step,” Fae said. “I want police abolition, and I feel like universities have a role in that too for the city.”

Fae cited several connections between DePaul and CPD as immediate ties to cut, including the University Center for Writing-based Learning’s Writing Fellows program and the Educational Leadership program with the FOP, in which DePaul provides a 25 percent tuition reduction for onsite programs at the Chicago Police Academy.

She began organizing by reaching out to as many of her classmates and student organizations as possible.

“I was trying to get a huge coalition effort,” Fae said. “In doing that, I wasn’t thinking ‘group-wise,’ more just ‘people-wise.’ I was thinking that I want as much of a broad swath of the student body as possible here.” 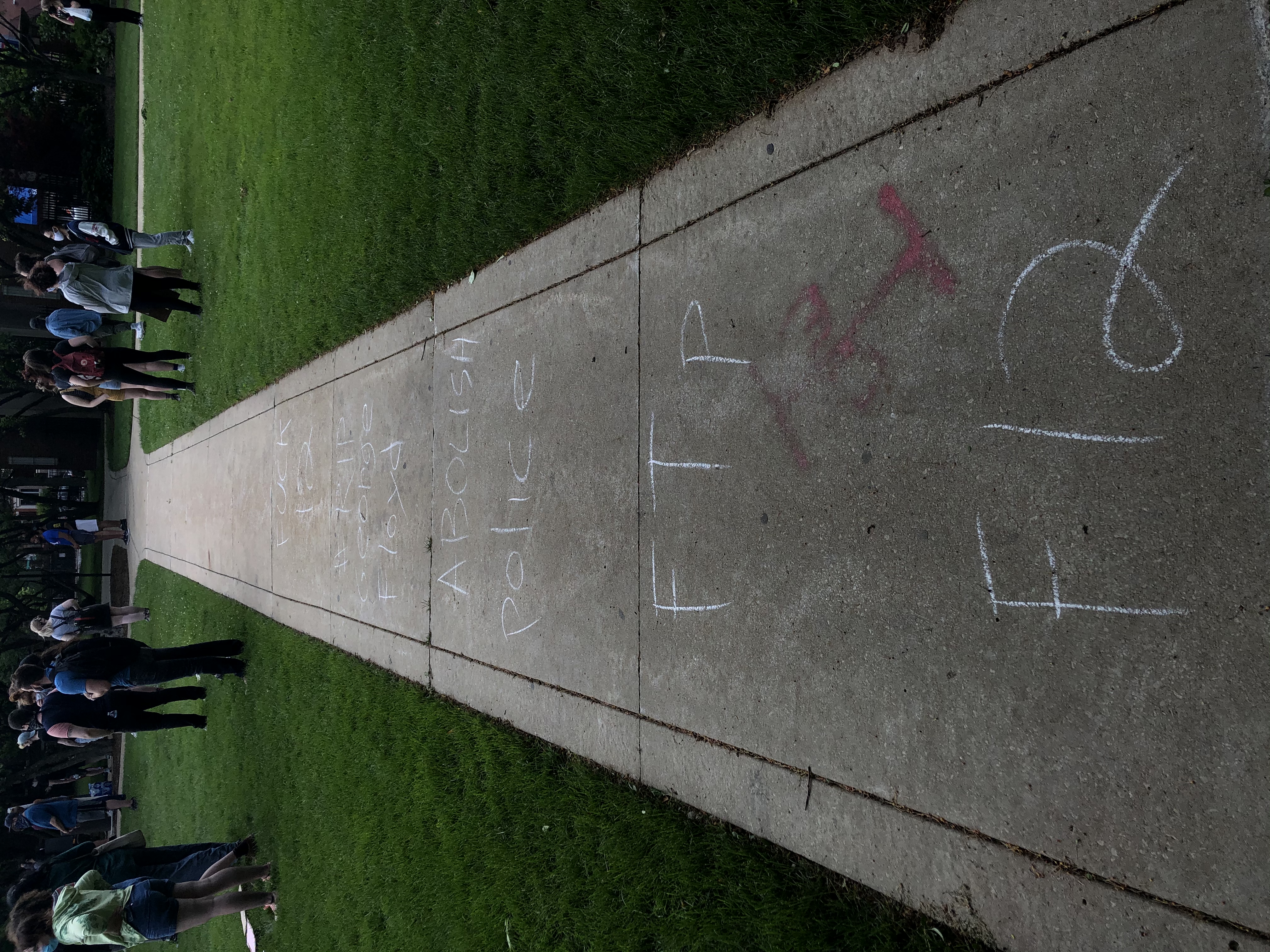 Chalk on a sidewalk cutting through the Quad read "Abolish Police" during the June 10 event. Photo by Francesca Mathewes, 14 East. 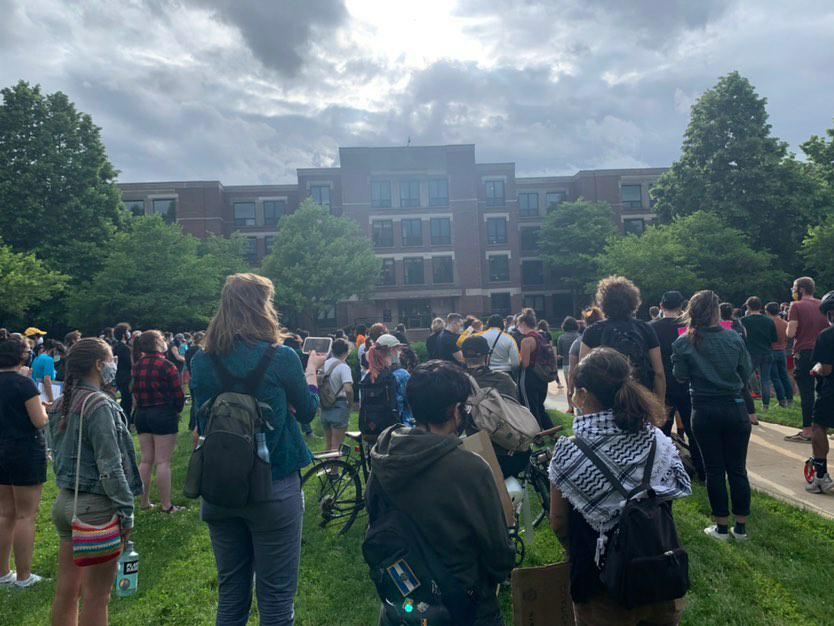 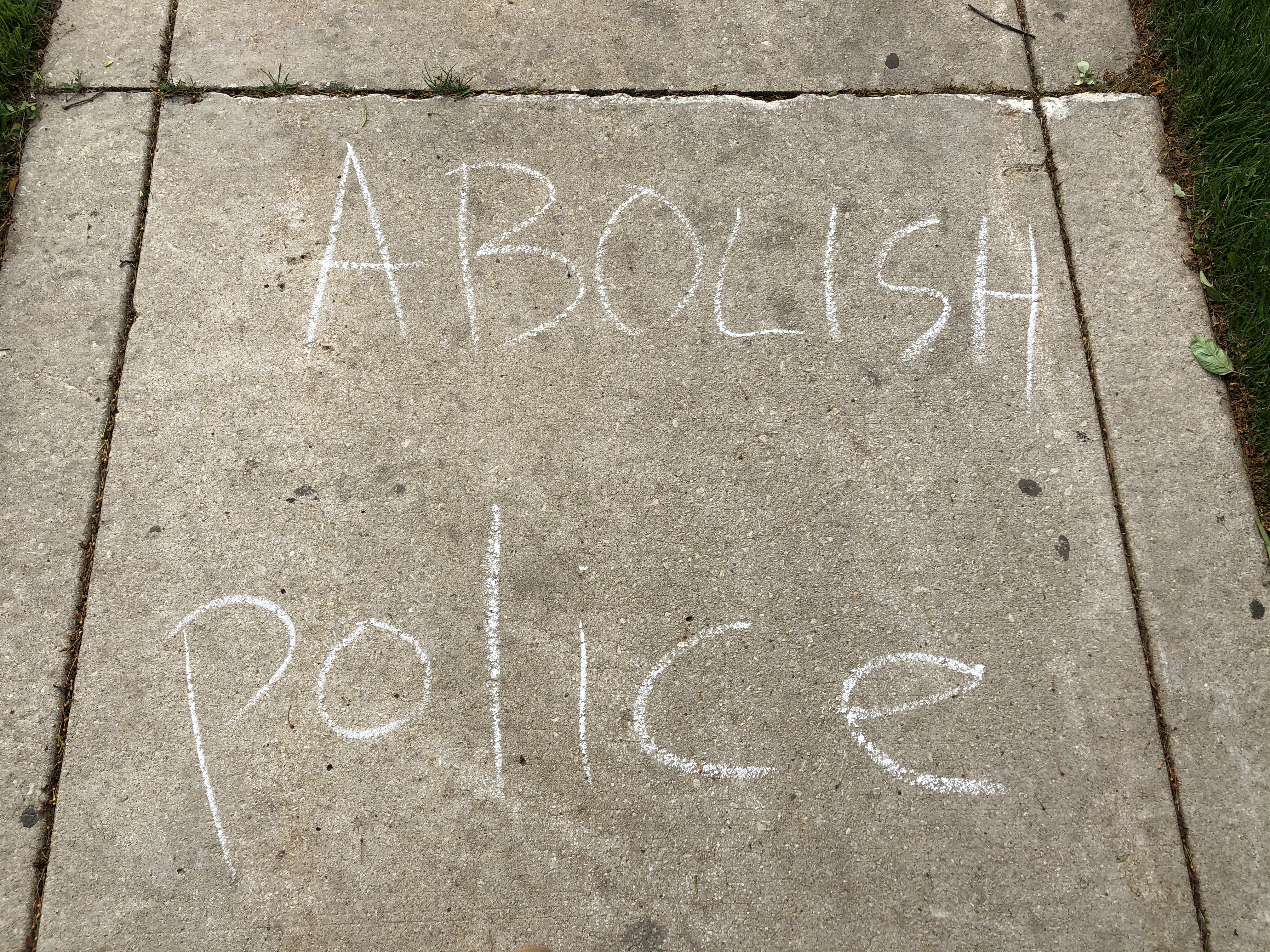 Chalk on a sidewalk that cuts through the Quad read "Abolish Police" during the June 10 event. Photo by Francesca Mathewes, 14 East. 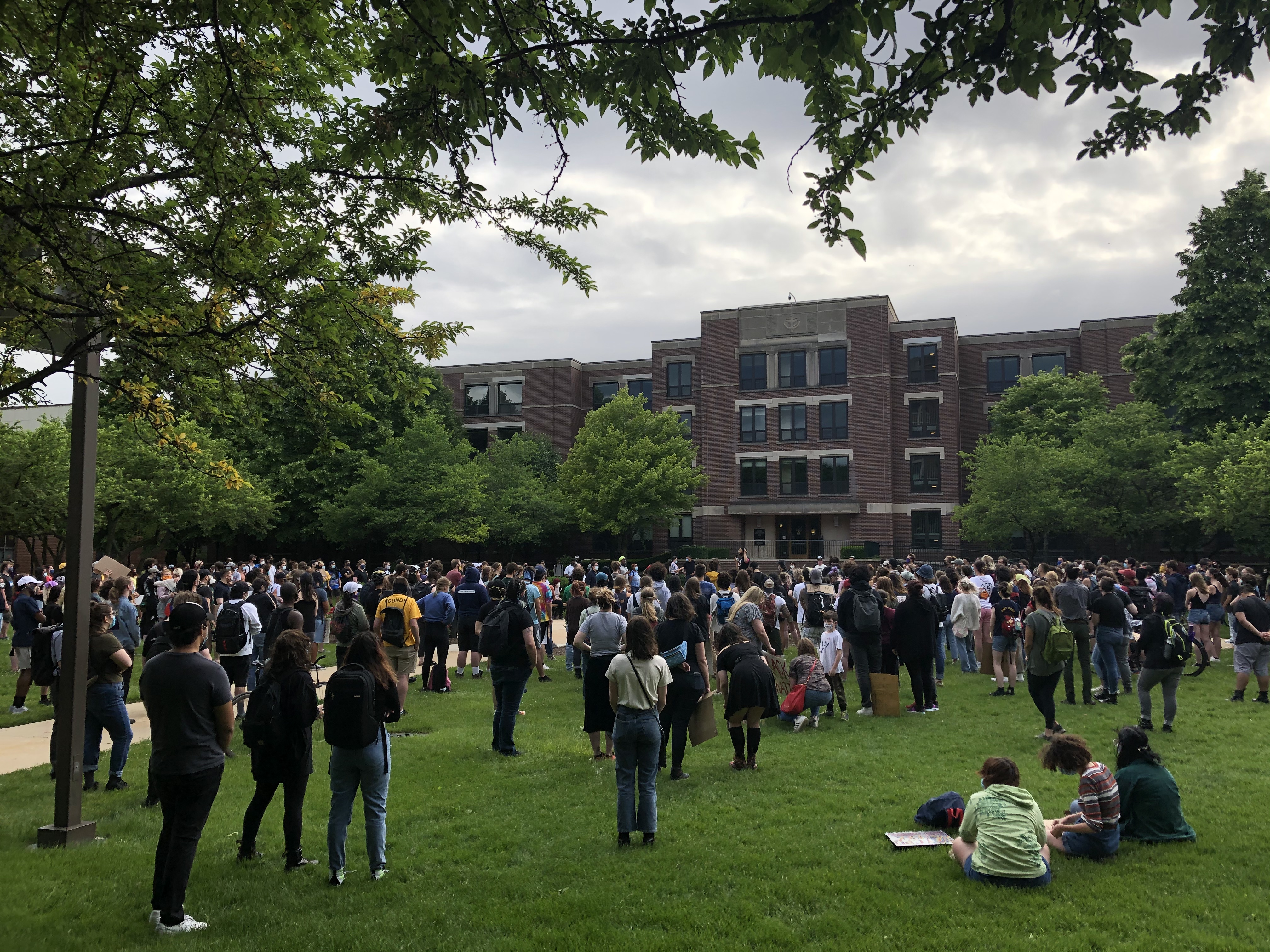 For some at the protest, DePaul’s relationships to CPD are not only a matter of institutional accountability, but are a matter of personal concern as tuition-paying students.

“I think DePaul talks a lot of talk about racist actions, like when they brought [Milo Yiannopolous] to campus, who [is] a white supremacist, and people were upset,” said Lonnae Hickman, a rising senior.

DePaul has also notably allowed other far-right commentators to speak on campus such as Charles Murray.

“If I wasn’t a senior, I would leave, because they don’t seem to value Black or Brown students here,” she continued. “So I felt like this was a perfect way to come out and participate.”

“We talk a lot about being dreamers, about protecting our students, but it’s a lie,” she said. “We keep doing these things, saying we’re gonna do better, or leaving it up to the [individual] colleges to make decisions, but clearly that’s not enough work.” 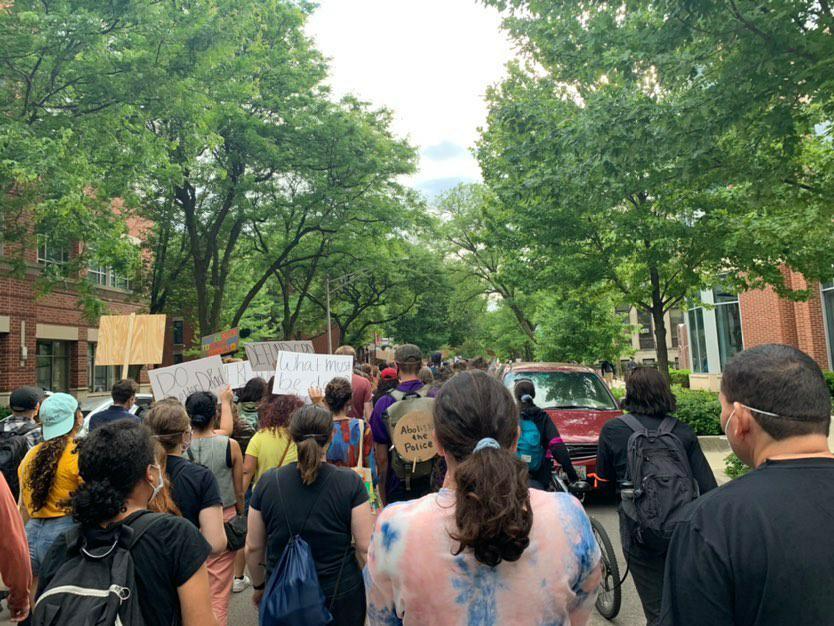 Although DePaul did not respond to these specific questions regarding sentiments of some Black students, Interim Provost Salma Ghanem said in an email addressing the protests:

“In recent days, we have been asked to sever ties with the Chicago Police Department (CPD) and the Fraternal Order of Police. Our ties to these organizations are limited to programs that involve teaching. Student petitions have requested that DePaul stop offering courses to CPD officers. We understand that this request is rooted in pain, outrage, and the desire to take a stand against police brutality. We need to remember though, that the actions of a few do not represent the students we teach.”

She continued, “Black Lives Matter. We know that George Floyd, Breonna Taylor, Laquan McDonald and so many others should still be alive.  We also know education can be part of making the change we all want to see in police departments.  We support all who are working to make police reform a reality.”

This was the same response given to 14 East’s request for comment for our story detailing DePaul’s partnership with the FOP. 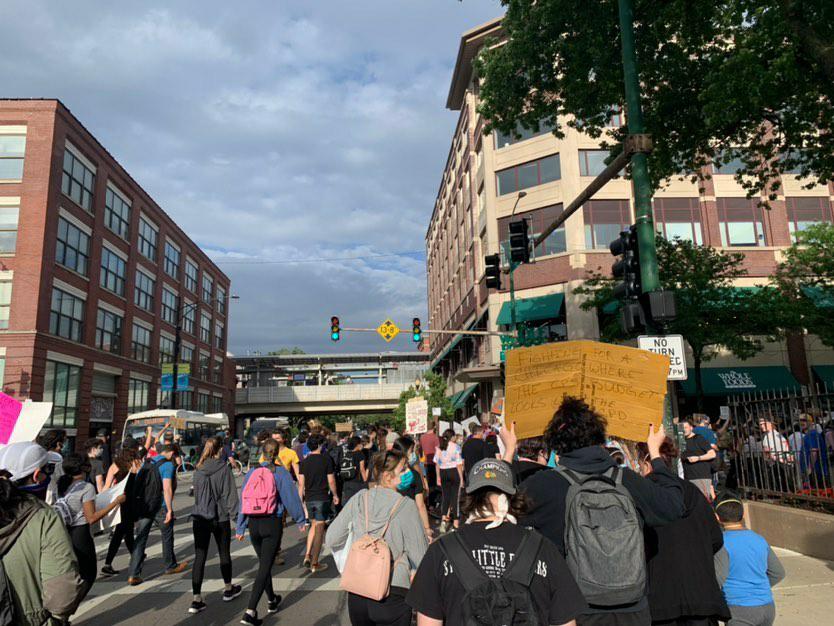 In addition to addressing DePaul-specific issues, the protest on Wednesday also served as a continuation of the international police abolition uprising movement sparked by the police killing of George Floyd on May 25.

“I think there’s a lot of realization happening. A lot of people are realizing what privileges they do and do not have, and a lot of people are shifting,” said Chris Cook, a freshman at DePaul. Cook has been consistently attending protests over the past several weeks and is close with organizers of Wednesday’s protest.

“We are literally living in one of the chapters in history books that our kids will read. That our kids’ kids will read,” he said. Cook added that the change that is being called for through the recent protests should not just be reactionary, but intentional and comprehensive.

The movement for police divestment at DePaul will continue alongside the larger movement for divestment and defunding of police departments in Chicago and across the nation, both Cook and Fae said.

“There needs to be sustained pressure of this movement. I’m also kind of aware of the fact that it can’t just be me. This isn’t ‘Fae’s thing,’ this is Black Lives Matter, and I want to talk about the bigger picture of that,” Fae said. She also said that among the coalition that united behind this protest at DePaul, she felt that there was enthusiasm about continuing action through the summer.

“I think it was kind of a first step. A first brick laid,” she continued. “And there needs to be a lot more to build a wall of resistance.”