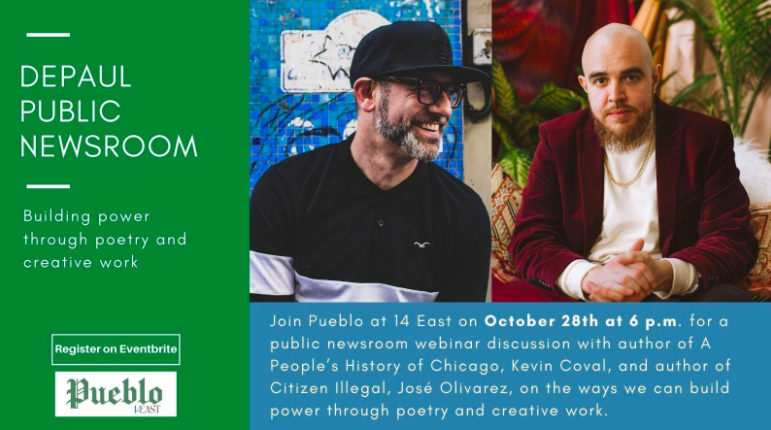 On Wednesday, Pueblo hosted our very first Public Newsroom: Building Power Through Poetry and Creative Work. The topic was something that was very important to the Pueblo staff as we launched Pueblo with the intention of creating a platform for Latinx journalists and creatives to share their work. As the election approaches, we especially wanted to learn about the ways we can build power and show up for our communities outside of just reporting on them, as well as create a space for joy and healing during the pandemic.

To do this, we were joined by José Olivarez, author of the book of poems Citizen Illegal and master teaching artist, and Kevin Coval, author of Everything Must Go, founder of Louder than a Bomb, a youth poetry festival, and artistic director of Young Chicago Authors. The two poets read us some of their new work and had a conversation on the intersection between journalism and poetry, referencing the work of Gwendolyn Brooks and Studs Terkel. They then led a writing workshop where attendees first made a list of the things that came to mind when Olivarez and Coval asked things such as: “When liberation day comes, where will the celebration be?” “Where will the after party be at?” “Where do you feel fresh or relieved after leaving?” “What song makes you feel fresh?” “What are the things preventing you from feeling fresh or liberated all the time?” –– they then read two more poems before “turning over the mic” and giving us 15 minutes to write our own pieces based on the lists we created and sharing them with the audience.

We asked our attendees to submit their pieces if they felt comfortable with them being published. You can read a few of them here: 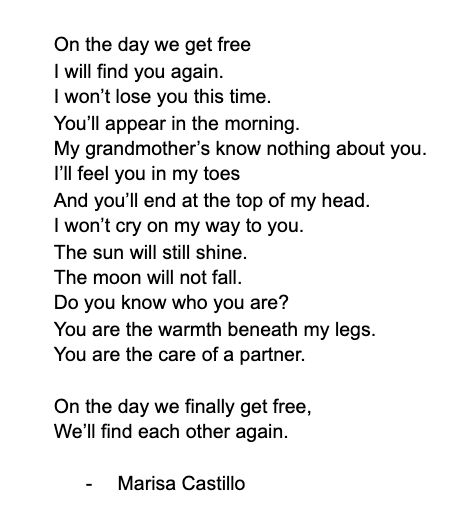 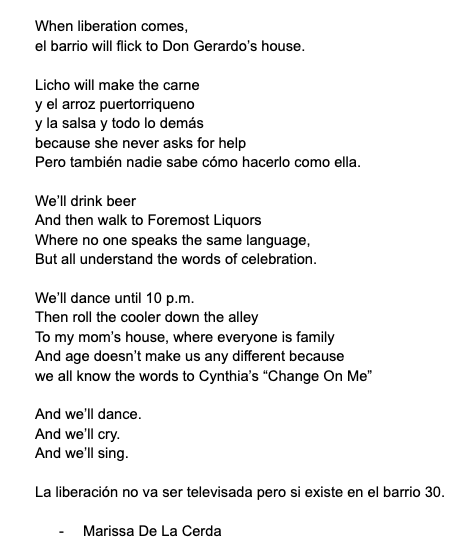 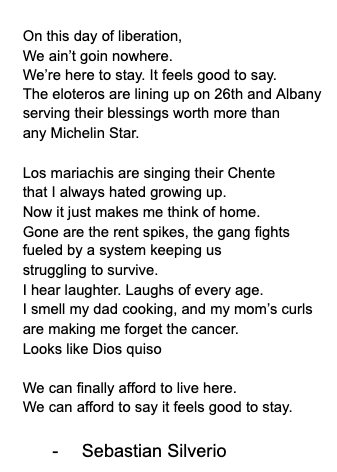 Additionally, here are 5 takeaways from the newsroom:

The Tradition of Verse Journalism

Our speakers brought up the tradition of verse journalism, a creative medium that leans into the subjectivity of journalistic writing. Coined by Chicago’s own Gwendolyn Brooks, verse journalism focuses on real, everyday events but allows for more imagination and emotion than a stricter journalistic piece might, getting at the truths and nuances that poetry can portray. Her “a song in the front yard” and Martin Espada’s “Jorge the Church Janitor Finally Quits” were named as examples of this medium.

It’s important to pay attention to the way words and sounds feel.

As a native Spanish speaker, Olivarez uses many Spanish-language words in his poems (one of his favorites being the word “ojala”). “Spanish-language words have their own texture,” he said –– and this texture can get lost in translation. Therefore, he encouraged us to incorporate the different languages we know into our writing and pay attention to the way words feel in a sentence as there are some words that don’t feel the same way –– or give off the same feeling –– in English.

Similarly, Coval encouraged writers to listen to the way sounds feel as he discussed the way his writing is sometimes influenced by things like the “pulse” of the train.

When an attendee asked both Olivarez and Coval what they want their legacy to be, Olivarez said he focuses more on the responsibility he has now of writing about his communities and what is affecting them today, instead of what he will be remembered for. This was reflected at another point in the workshop when he said that as writers, we can choose what to write about regarding our communities because “it’s news for a reason,” just like we can choose what not to cover.

Empowering yourself through writing

When Olivarez and Coval conducted a workshop with the audience, they demonstrated the empowerment from writing about future potential liberation. They asked plausible questions that any individual can ask themselves daily, and the questions encapsulated the positive emotions lost during these hectic times. Finally, the transformation from lists written during the questions into a written piece reverberated the feeling of empowerment.

Both Olivarez and Coval stressed the developmental influence of hip-hop on not only their writing but on their senses of visibility as Chicagoans. According to Coval, because it demands the speaker to represent where they are and what they stand for, hip-hop is “radically democratic,” reclaiming power by going against popular narratives. What other stories can be told through art? How can people who are usually overlooked be given a space?