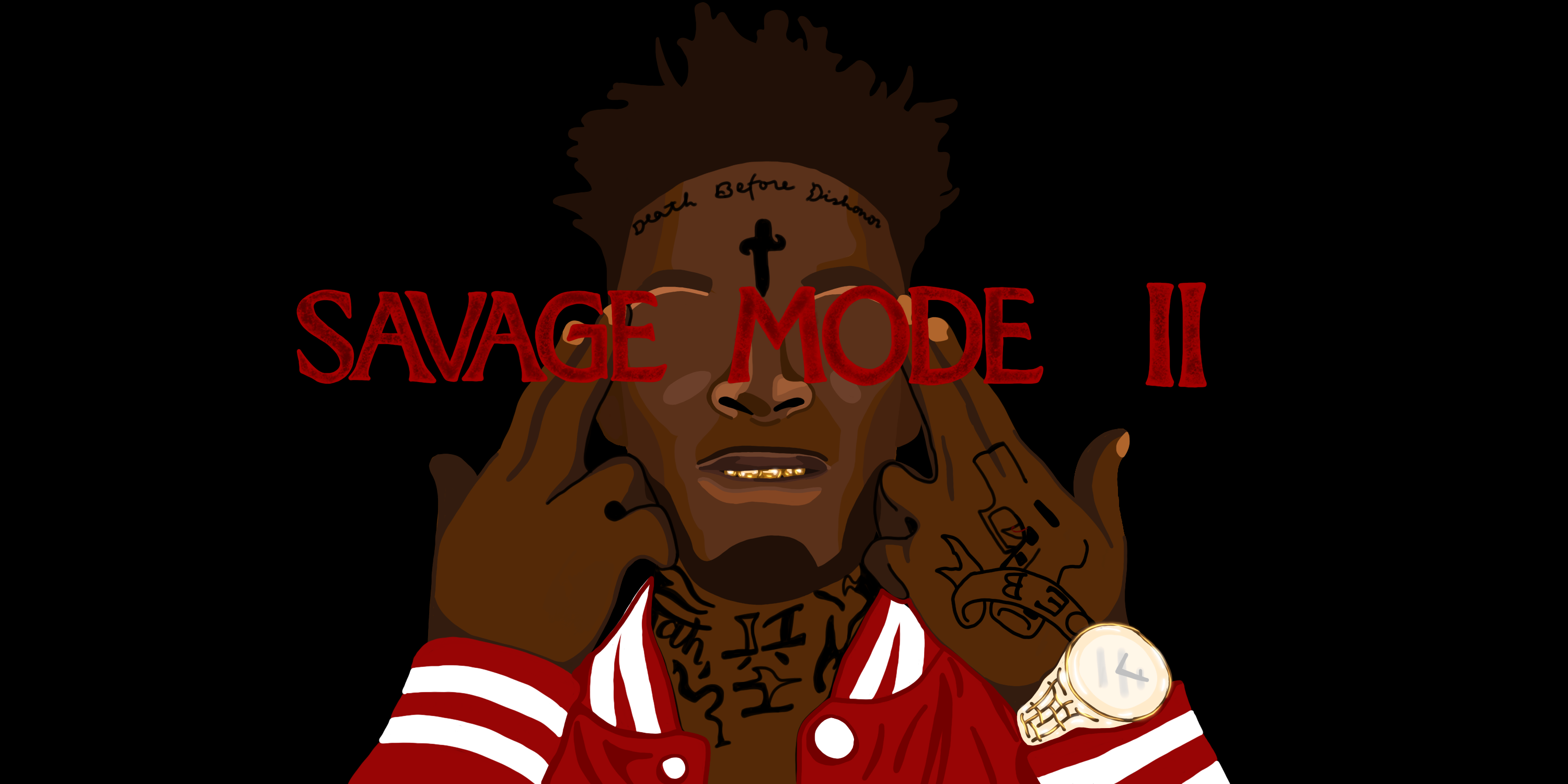 “Glock In My Lap”

Like most quarantined hip-hop heads, I anxiously awaited Savage Mode II and I was not disappointed at all by the initial drop. The album is a sequel to the 2016 collaborative EP Savage Mode, which perfectly united Atlanta’s swaggering hometown hero, rapper 21 Savage, with St. Louis-born Atlanta transplant producer Metro Boomin. They united under a groove that they managed to top on their newest collaboration.

Savage Mode II also features legendary actor Morgan Freeman’s narration on several tracks, which gives the album a movie-like feel. However, instead of choosing to re-release a deluxe version of the album, they turned to Houston’s hip-hop scene for the reissue of Savage Mode II, titled Savage Mode II:[CHOPPED NOT SLOPPED]. Eschewing the typical extended “deluxe version” album format that has dominated music recently, Metro Boomin places his Atlanta-grown hard-hitting and melodic production in the hands of OG Ron C and the “chopped and screwed” (also called ChopNotSlop) DJ technique pioneered by DJ Screw, a Houston native son. Atlanta and Houston are sister cities that function as shrines to Black creativity, and their hip-hop is cousin-like, as each city playfully feeds off of the creative output of the other. Houston is slick and smooth where Atlanta is hard and bold, but they still work out at the end of the day.

Before dropping the remix album at midnight, Metro Boomin tweeted on October 18, “Chopped up not slopped up tonight paying homage to the OGs and classic hip hop. That deluxe s-t burnt out #RIPDJSCREW.” Metro Boomin, real name Leland Wayne, has arguably ushered in a new era of the Atlanta hip-hop sound that has dominated national airwaves for the past seven years. Producing for Atlanta’s finest rappers such as Future, Migos, and Rae Sremmurd, his percussion-laden tracks always retain a melodic element that makes them perfect for chopping and screwing.

“Chopping and screwing” is a uniquely Texan invention, crafted by the aforementioned DJ Screw. Screw, born Robert Earl Davis Jr., single handedly crafted this genre that has influenced Houston artists ranging from Beyoncé to Travis Scott. Davis was addicted to codeine syrup mixed with soda (colloquially known as lean or sizzurp), which produces a sleepy, slowing effect on the user. These effects fueled his creation of the subgenre, which was often listened to under the influence of downers such as codeine and marijuana.

The technique is akin to drizzling honey on a hot biscuit. It oozes in a hypnotic and inviting haziness that feels dream-like. Chopping and screwing takes the original song, slows it down and cranks up the melodic undertones while dropping the pitch of the vocals, creating a vibe that is distinctly Houston in its slow aggressiveness. Sadly, Davis died of an overdose at 29 in 2000 before his musical style took deep hold in the South, so he never lived to see the influence that his music had on producers throughout the region such as Metro Boomin and OG Ron C. Tracks throughout many of Metro Boomin’s discography contain obvious flavor from DJ Screw’s tapes, while OG Ron C is DJ Screw’s musical son and the engineer behind the ChoppedNotSlopped mix of Savage Mode II.

Savage Mode II reunites 21 Savage and Metro Boomin after a victory lap of releases in 2018 and 2019. Amid controversy over his citizenship, 21 Savage released I Am > I Was (pronounced as “I Am Greater than I Was”), garnering a Grammy nomination for Best Rap Album, while Metro Boomin dropped the acclaimed Not All Heroes Wear Capes. Like its predecessor, the album showcases 21 Savage’s prowess as a lyricist. He’s a hood poet who makes it very clear that he lives what he spits over Metro’s beats. His bars are tricky and braggadocious, clearly pulling on the mafioso influence of New York while retaining an Atlanta edge. He spins tales of his adventures hitting licks, moving weight, and basking in luxury like a warrior describing the spoils of war and it works incredibly well on this album.

21 and Metro Boomin connect with Drake on the uptempo standout single “Mr. Right Now,” which effortlessly fades into the smooth, violin-laden track “Rich ***** S**t” that brings in fellow Atlanta rapper Young Thug. As a longtime Thugger acolyte, I loved hearing his assist on a track with such a slick feel to it. 21 Savage retains his successful rapping partnership with his cousin Young Nudy on “Snitches and Rats.” Nudy’s verse throws 21 a Hail Mary and they play off of each other with an effortlessness that brings back memories of Puffy and Biggie on “Big Poppa.” However, 21 Savage truly shines on his individual tracks “Glock In My Lap,” “Steppin on *****,” and “Brand New Draco,” showing that he’s definitely hitting his stride along the 21st century Southern rap greats.

Savage Mode II:[CHOPPED NOT SLOPPED] is a masterclass that infuses the already great initial body of work with Texan flavor. Though the chopped omits the Morgan Freeman vocals, it gains an underground vibe when given the ChopNotSlop treatment. The chopped and screwed remixes of “Many Men” and “Brand New Draco” boost the haunting elements of Metro’s initial tracks, while the remix of “Rich ***** S**t” is perfect for laying up with your boo during early November. The remix album is a hypnotic reimagining of Savage Mode II that pays deep respect to the legacy of DJ Screw. This release also showcases two of Atlanta’s finest musicians in their prime and it is certainly one of the best rap releases this year and will certainly remain on my winter rotation.