Everything I Love Tries To Kil..

On The Alchemist, Cooking and Getting Roasted

On The Alchemist, Cooking and Getting Roasted

As Alan Maman, the California producer who records under the alias The Alchemist, states on the third track of his most recent record The Food Villain, I am “…not culinarily inclined.” He says so with a mumbling of words — nah, I have no reservation admitting it. In all of the apartments and townhouses I moved in and out of as a kid, I was surrounded by people who loved cooking. I preferred to imagine myself as an evil scientist concocting potions when I got the chance to play in the kitchen. I was quickly and thoroughly scolded for wasting good food, so I relate to the whole “villain” concept here.

If there’s one thing The Alchemist does know how to serve and prepare, it’s beats. He’s the producer behind some of underground hip-hop’s best (“We Gonna Make It,” “Worst Come to Worst,” “The Realest,” ad infinitum) and is known for his prolific and collaborative nature behind the boards. His drums are always sparse and laidback, and his use of delay and reverb create atmosphere. His soul and jazz samples of horns, strings, guitar, bass and more are expert.  There’s no one aspect to his music that shines over the rest other than his sheer output. In 2020 alone, he has put out five stellar albums: three are collaborations with MCs and two are beat tapes, leading me to The Food Villain, released October 25 this year. 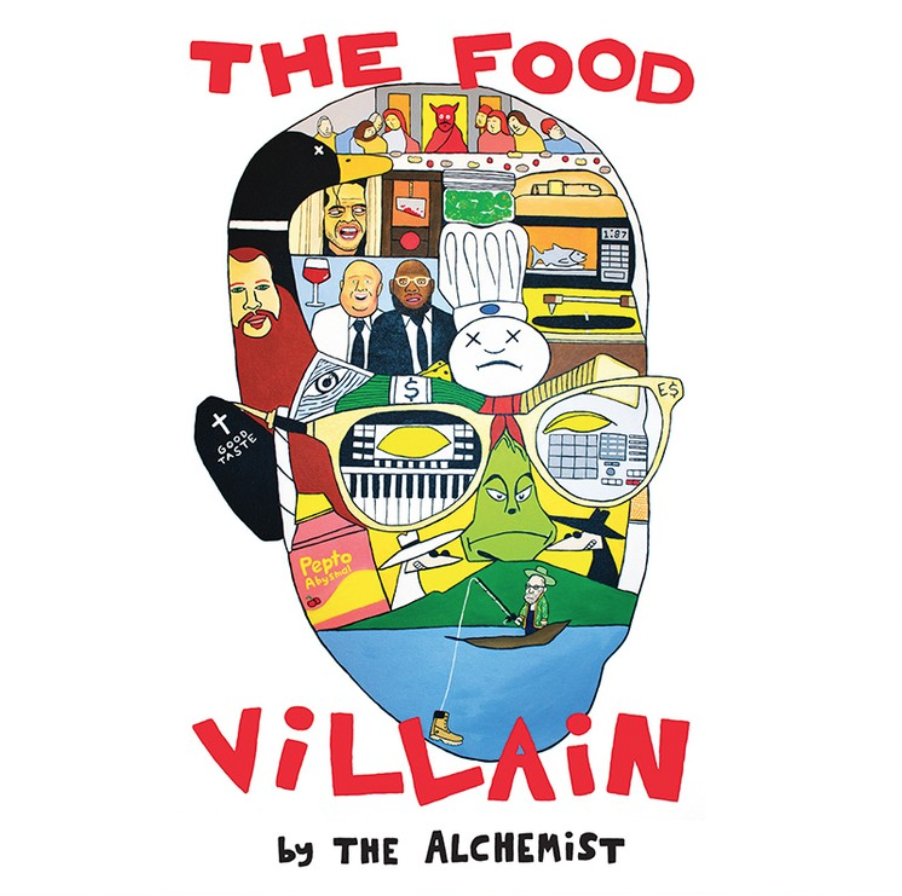 The Food Villain by The Alchemist album cover

For the majority of this album, the space in which one might hear raps is filled with samples of dialogue from the VICE food documentary show F––k, That’s Delicious. The Alchemist appears and co-stars in the show along with Meyhem Lauren, Big Body Bes and host Action Bronson. He and many of the same cast members appear in another VICE show, Traveling The Stars: Action Bronson and Friends Watch Ancient Aliens; their chemistry and rapport are well-established. In both shows, The Alchemist is a deadpan foil to Bronson and friends’ exuberance. The samples of conversation on this record reveal his distaste for fine dining, frivolous palettes and cooking in general, which opens him up to the many jokes of his friends.

I feel it. I got through the last quarter of my freshman year of college solely on peanut butter. Straight up peanut butter. In the years following, my kitchen realm has not extended much farther than the microwave. But quarantine this year has allowed me time to grow. And to grow, one must take an ‘L.’ A few weeks ago, to the horror of anyone I would later tell this story to, I tried my hand at making Hamburger Helper for the first time. As I live with four other college students, there was no unspoiled milk in my fridge.

Now might be a good place to mention that I have no sense of smell. No, it’s not a COVID-19 thing. I’ve never been able to smell and I have a dulled sense of taste; I put hot sauce on as many foods as possible. So, again, I feel The Alchemist on his lack of care for the culinary. I made Hamburger Helper with French Vanilla coffee creamer and thought, “Eh. What’s the worst that could happen?” Mind you, besides frying eggs, I’d rarely explored the stovetop. This was kind of a big deal for me and it was a really sticky, sickly-sweet failure. One of my roommates entered the kitchen in shock at the bottle of French Vanilla, the half-emptied bowl of pinkish pasta and my s-–t-eating (lol), ashamed smirk. He proceeded to roast me for the next week and for some reason I loved every second of it.

Why is it that we crave for others to do impressions of us? When one friend is looking another friend over, taking jabs at their appearance, why do we often have the urge to say, “do me, next?” It doesn’t always work the same when we try to do it to ourselves. The self-roast, if done without grace and awareness, can be unbecoming. The Food Villain, across its 16 tracks and 24 minutes, feels as if The Alchemist watched this video and decided to make a brilliant musical equivalent on his own terms.In that, The Food Villain is less of a love letter to food as much as it is to friends and the privilege of being roasted by the people you care most for.

The Alchemist accepts the jokes with grace. Opening track “Alan” features Bronson and crew clapping for him and shouting his name. It’s a moment of overt positivity that is few and far between on the rest of the album.

“He’s a villainous person,” Bronson says of The Alchemist and his terrible taste in food, before ironic droning synths come in. From there on, the transitions from track to track make it so the project’s twenty-four minutes run like one collage of a surprisingly funny song.

“Who Eats Wings Like That?” is my favorite track on the album: its cool guitar loop stands out, but the bells and wind instruments provide perfect color. Bronson desperately tries to convince The Alchemist to taste some wings but The Alchemist desperately refuses: “That looks like a horrible idea… is this breakfast?” Genuine moments like this are comedy gold and can be heard on any song of the record. Other hilarious song titles include “Cheese is Overrated” and “Skeptical About Goat.”

If you are that lucky and more, you feel so seen in this moment that you’re laughing as well, caught off-guard, your insecurities laid bare by one solid quip and yet you live.

I did do some cooking before the Hamburger Helper incident, actually: in April or May (the winter/spring months of 2020 blur together), my roommates and I cooked for each other for a week. After nights of their great meals, I knew I had to make something that stacked up. With some excitement and a lot of nerves, I decided to make huevos rancheros and a cheese-bean dip. I pretended to be that salt bae guy as I splashed hot sauce on the over-easy eggs; I laughed at myself and found there to be a comfort in that.

When I served the plates for my homies, I cracked self-deprecating jokes about this overly simple meal not measuring up when compared to theirs. It was not graceful of me and I think they were gearing themselves for disaster more than they would admit. However, they walked out satisfied and even grateful, the same way that I felt when they cooked for me. I think we played Rummy that night and fell into hours of improv, making up false dramas and maybe meaning a bit of the comedic conflict, relishing its release because we mean enough to each other to feel comfortable showing it through humor.

“Yo, Al looks like he used to model cigarettes,” Body says as someone “oohhhs” and Body breaks out into laughter on “Flavor Break-Thrus,” and without any visual aid you can tell that they’re in a circle of close friends, surrounded by food and passing time bantering. “I still do,” Al responds almost immediately, and it’s in that moment that something special and hard to put into words is felt. Maybe it’s in the way that Alchemist puts echo over Body’s laugh to go on far longer than any other dialogue, the same way we tend to remember the sound of our friends’ laughter more than the joke itself. Maybe it’s the bed of synths that follow. Al’s retort, though, his acceptance of the burn, reflects the love in this whole album.

The people who poke fun at you, if you’re lucky, are the people who know you the best and look out for you the most. It’s strange, isn’t it?

If you’re lucky, you’ve been in this scenario: you’re in a circle of friends, not ready for lift-off but someone looks at you with a glimmer in their eye and a joke in their mind. They say something so honest in their perception of you and so confident in their delivery that it sends the entire room soaring with riotous laughter, gasps, clapping, all the while you’re in the middle of all this. If you are that lucky and more, you feel so seen in this moment that you’re laughing as well, caught off-guard, your insecurities laid bare by one solid quip and yet you live. Then, the miraculous landing: you look around the room of grins and nods and sighs, in one piece, and someone breaks the silence: “Damn, they really baked your ass.”

The Food Villain consistently shows the ingredients for this moment. Even its front cover is a silly collage of faces and people that make up Al’s own face. As many times as there is a sample about villainy, there is one of a friend’s laughter, often echoing into the next musical idea and making it profoundly unlonely. On “I Hate Everything,” Action Bronson delivers a short verse parodying Al on his own song: “Three Michelin stars, I’m not impressed / I hate everything /…I never was on a soccer team / they never let me play.” It’s the kind of cutting commentary that only someone you’ve been vulnerable with can make with heart. The next track, “Afterschool,” features a snippet from an interview with rapper MF DOOM (whose own food-based album MM…FOOD is an underground hip-hop classic) in which he compares his creative writing process to joking around with his crew and that stream of ideas and potential inspiring him when he’s creating by himself.

In this time of our lives, we can’t laugh in person with old friends without possibly sacrificing our health and definitely our senses of good citizenry. I live with people who I call my friends, so I’m not usually alone even when I feel lonesome. Lately, when I walk into the kitchen with an empty stomach and decide to make something with pots and a cutting board, I’ve been throwing on the jazzy, trippy sounds of The Food Villain as background music.

Like, damn, what if I do empty out this potato I just boiled and fill it with vegetables and black beans? What if I do mix those sauces and put a little bit of cayenne pepper on that so even my dulled taste buds can get a laugh? Or I can call an auntie and, amidst our back and forth of stories, ask for ideas, learning tricks and secrets I had never humbled myself to act on until recently. It’s a currency of communion that I’m new at, one that The Alchemist has proven he has no taste for whatsoever, but one that I think he deeply understands.