5 Takeaways from our Public Newsroom on How to Rep...

5 Takeaways from our Public Newsroom on How to Report on Unions: Their Purpose, Place and Power within Chicago 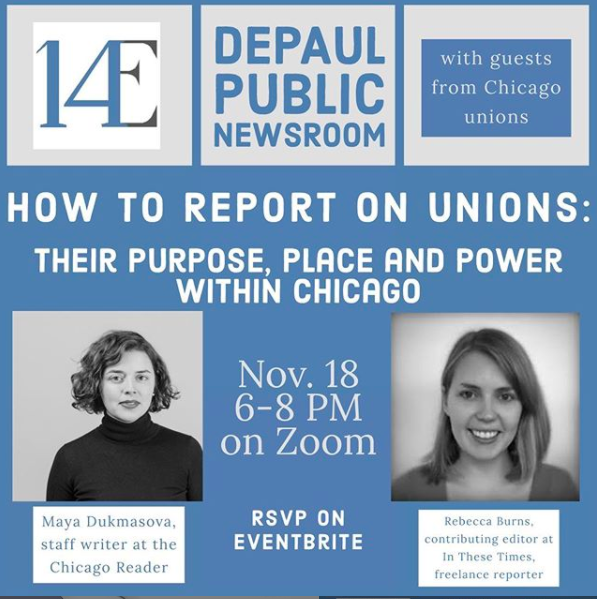 If there’s one thing we’ve learned about unions, it’s that they are complex ––  and so is reporting on them.

This week, we had two of the best in the labor reporting game –– Maya Dukmasova, a staff writer at the Chicago Reader, and Rebecca Burns, a contributing editor at In These Times –– share their knowledge at our November Public Newsroom. The 14 East staff was joined by reporters, activists and members of various Chicago unions to discuss how to report on unions and their purpose, place and power within Chicago.

We’ve compiled five main takeaways that serve as reminders and provide insight on how to report on unions in Chicago.

Every union has its own history of disputes with employers. It’s our job as reporters to learn that history.

Every union has its own history and context of disputes, as well as their own politics –– they’re all different. You, as the reporter, have to know where the workers are coming from. When reporting on a union, it’s important to look into past disputes, the results of those disputes and the bargaining method of that union. When you’re reporting on a union, you’re also reporting on its history.

Unions are not inherently progressive.

While unions have a record that leans to the left, not all unions are inherently progressive — it’s important to keep that in mind when approaching a story. Unions and their memberships are nuanced. The Fraternal Order of Police, for example, is not progressive and requires a different approach than, say, a tenants-rights union.

When reporting in right-to-work states, reporters often have to deal with conservative counterpoints.

Workers in right-to-work states are not required to join unions in their industry. Unions work differently in these states, and have different types of power that are important to understand. Additionally, when reporting in states with right-to-work legislation, one may encounter conservative anti-union counterpoints that paint unions as monolithic interest groups aiming to sway legislation.

All the logistics aside, union members are people who have dealt with inequitable working conditions.