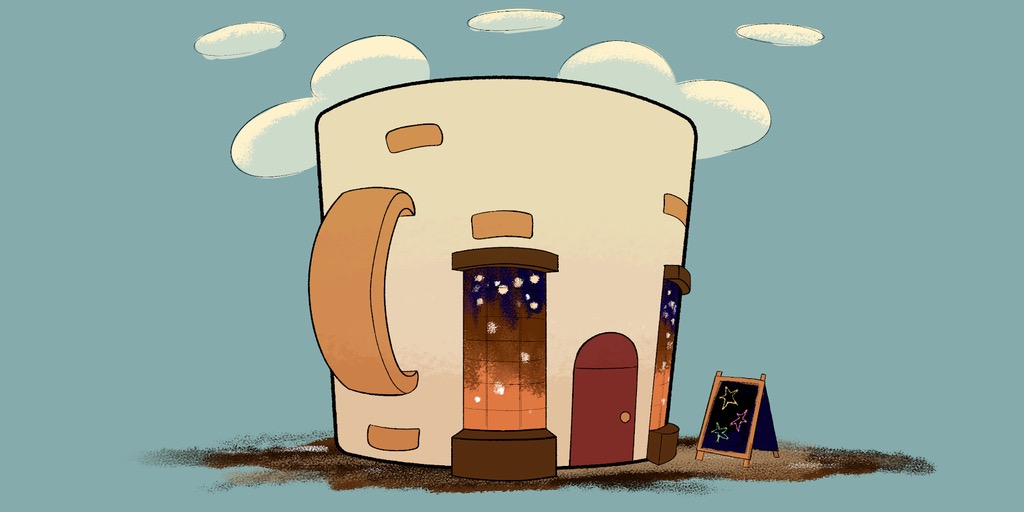 As you approach the corner of 31st Street and Halsted Avenue in Bridgeport, you’re suddenly struck with a craving for a warm caffeinated beverage. You should probably grab a snack, too — your stomach is rumbling. You glance across the street and notice there’s a Dunkin Donuts but, given the number of independently owned restaurants in the neighborhood, you decide to whip out your phone and see if there’s any locally owned coffee shops you can visit instead.

Your hunch was right — there’s actually two independent coffee houses in walking distance. Less than two blocks south at Jackalope Coffee & Tea House, there’s a small bakery case filled with unique treats, interesting specialty drinks and a hefty list of breakfast and lunch offerings (including vegan options!). Plus, the entire place is decked out in bright colors and funky decor. For a more traditional, relaxed vibe, Bridgeport Coffeehouse is two blocks west offering just as many food options and a more sophisticated, slimmed-down coffee selection. For years, these two shops and the nearby Dunkin Donuts formed a trifecta for Bridgeport residents seeking a caffeine fix. Now, a brand-new Starbucks has been thrown into the mix.

The new Starbucks opened on December 28. The coffee chain and its sister business, an AT&T store, now occupy a space that was previously owned by the city. The property remained vacant for over 13 years until City Council approved a proposal from Chicago developer Glazier Corporation to build a 2,300-square-foot drive-thru Starbucks and a 2,200-square-foot retail space in December 2018.

When the project was announced in September 2018, just three months before its approval, it received a wide range of responses from the community. In neighborhood Facebook groups, some supporters who considered themselves regular Starbucks coffee drinkers expressed they were happy to have a location so close to home. Before the new development, the closest Starbucks locations were both over a mile-and-a-half away in Bronzeville and Chinatown.

Other residents shared they were happy to see a vacant lot on a commercial strip replaced with new businesses, even if another coffee shop wasn’t the best fit given its proximity to two smaller coffee houses.

One of these residents is Carolyn Huizar, a lifelong Bridgeport resident. When she and her mother heard construction would begin on the corner on 31st Street & Halsted Avenue, they were initially excited. However, their view shifted slightly when they discovered another coffee shop was coming to the neighborhood.

“When we heard it was going to be a Starbucks we were … disappointed.” said Huizar. “That doesn’t mean that I’m not going to visit at some point, but it won’t be a frequent occurrence, especially when prices at the small coffee shops are comparable. I think Starbucks is redundant in the neighborhood.” She added that if Glazier Corporation had considered the community’s needs, they might have seen that a gym or a clothing retailer would have been a better fit for Bridgeport.

Before the intersection was filled with coffee options, Huizar remembers growing up in the neighborhood when one of the only places available to grab a cup of coffee was Bridgeport Restaurant. As the area has developed over the last few years, she’s seen multiple coffee shops open — but she doesn’t think competition between small businesses is an issue.

“I think it’s good to have multiple specialty options because they each offer something different and they’re not too close that it becomes a problem,” Huizar said. “I think the issue with the new Starbucks is that it’s right between Jackalope and Bridgeport Coffee House. They could have chosen a better location for it — not in between two coffee shops.”

“It was already a done deal by the time I even heard about it happening.”

In addition to the oversaturation and potential threat the new Starbucks poses to the independent coffeehouses, residents who opposed the proposed development were also concerned with traffic congestion that would occur because of a drive-thru Starbucks window at an already busy intersection. Two bus routes service the intersection — the north-southbound 8/Halsted bus and the east-westbound 31st/Ashland bus — and the corner hosts a gas station and a strip mall with a Dunkin Donuts.

But perhaps the final strike for the new Starbucks was the price point at which the city would sell the lot to Glazier Corporation. The property was appraised at $790,000, but offered at a twenty percent markdown of $625,000. Offering a discount to a corporate chain that threatens to impede on small businesses made it seem like the focus of the new development was strictly corporate-driven, not community-driven.

“We all heard that Starbucks was given a discount on the sale of the property, but there were no offers of financial help when me and the other coffee shops were spending our hard earned savings to open our businesses,”  said January Overton, owner of Jackalope Coffee and Tea House and another lifelong Bridgeport resident. “It was already a done deal by the time I even heard about it happening.”

Of the residents that opposed the proposed development, the activists that make up the Bridgeport Alliance were some of the most organized in their resistance. Some of the alliance’s resistance actions included hosting monthly meetings where residents could share their opinions on the new development; encouraging residents to voice their opposition to Alderman Patrick Thompson (11th) and sharing scripts on social media that helped residents formulate their thoughts when contacting their representatives.

Despite the organized resistance from the Bridgeport Alliance and the testimonies of individuals who called and emailed Alderman Thompson, the lot was sold at the marked down price of $625,000 and construction began in February 2020. On opening day ten months later, Alderman Thompson welcomed the business to the 11th Ward in a Facebook post that announced he “was proud to add Starbucks to our portfolio of great local coffee shops!” His office did not respond to multiple requests to be interviewed for this story.

Since its opening, Overton says Starbucks has become more of a threat to her business than she originally perceived it would be.

“With people not wanting to get out of their vehicles and not being able to sit inside due to COVID-19 and experience the welcoming environment we offer, we are finding that some customers are choosing the convenience [of Starbucks’ drive-thru window] more and more every day,” said Overton.

While Jackalope and Bridgeport Coffeehouse can’t offer their customers a drive-thru service, independent coffee shops do offer an atmosphere and community connection that is hard for a corporate coffee chain to replicate.

“I like to think that we help to contribute to the diversity of the neighborhood by providing a safe space for everyone from all backgrounds to come to and feel welcome,” said Overton. “As a lifelong resident, I want to see Bridgeport have as many quality options as possible for everyone.”

“With this pandemic and having limited interactions with the outside world, it became a weekly ritual.”

When new resident Gracie Hammond moved to Bridgeport from Lincoln Park in May, she initially patronized chain coffee stores before discovering Jackalope. She was instantly hooked by their vegan offerings and vanilla lattes.

“With this pandemic and having limited interactions with the outside world, being able to walk through the neighborhood and go to Jackalope for a vanilla latte became a weekly ritual,” said Hammond.

Hammond said that when she’s ordered at Starbucks in the past, it isn’t just the quality of her drinks that has varied by location — she notices a big difference in the service as well.

“The Jackalope staff would remember me and my order when I came in, which is something super refreshing in such a big city,” said Hammond. “Whenever I go to a Starbucks it feels rushed, impersonal. The vibe at Jackalope is very homey and welcoming. ”

Part of that welcoming environment can be attributed to the effort Overton puts into truly knowing who her customers are, whether they’re some of the lifelong residents who initially supported her business or newer customers like Hammond. Overton estimates she personally knows at least at least 75 percent of the people who come in every day by their first names.

Moving forward, though, it may take more than a personal touch to keep Bridgeport’s local businesses afloat when they face corporate competition and changing restrictions due to COVID-19. Overton considered reaching out to other independent shops in the neighborhood to create a loyalty coffee card that would offer exclusive discounts when customers chose to support local shops over chains, but feared that promotions may not be enough.

“I fear that us smaller businesses who are already hanging on by a thread due to COVID might not be able to afford to take the financial hit that Starbucks will cause and will ultimately force one or more local businesses to close,” said Overton. “At the end of the day, the neighborhood will have not gained another business but lost a business, which means nothing was gained for the neighborhood and a local business owner lost their livelihood.”