Chicago Sees Another Protest in Support of Palesti...

Chicago Sees Another Protest in Support of Palestine 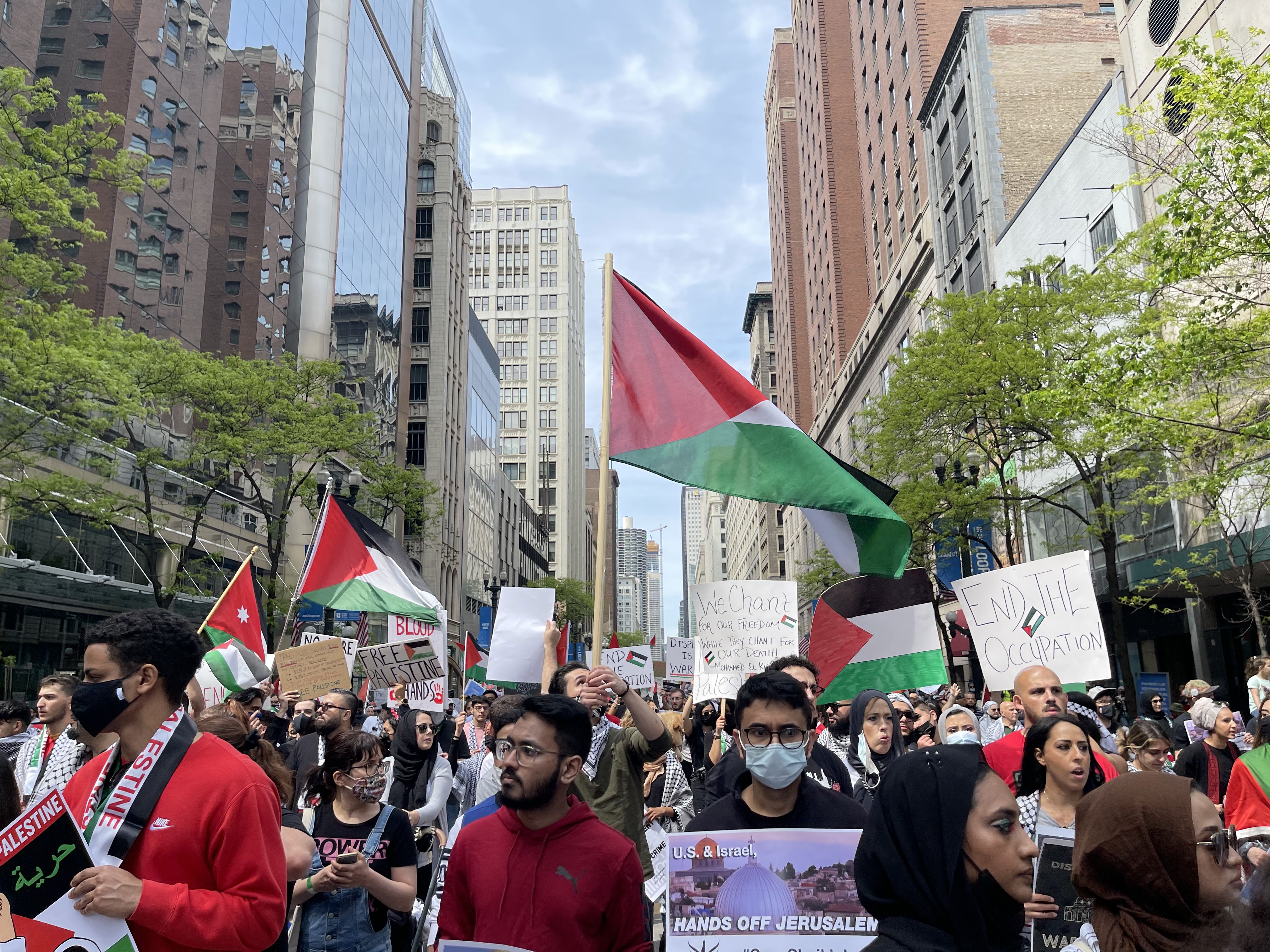 This coverage of the May 16 #Nakba73 protest centers Palestinian and pro-Palestinian voices, experiences and calls to action.

The sunny, cool weather last Sunday was ideal for the rally and march organized by The Chicago Coalition for Justice in Palestine. Starting at around 1 p.m. on Michigan Avenue and Ida B. Wells Drive, around 25,000 people took to the streets to advocate for a number of demands regarding the escalating situation in Palestine at the hands of the Israeli government.

Demands included a call to the United States government to prevent $3.8 billion of citizens’ taxpayer money from funding Israel, condemn the war crimes by the government of Israel, end the ethnic cleansing of the Palestinian people and stop the continuous occupation of Palestinian land by the Israeli government — specifically rrecent eviction notices of the families of the Sheikh Jarrah neighborhood.eferencing the recent evictions of the families in the Sheikh Jarrah neighborhood. There was a diverse group of protestors, ranging in age as well as ethnicity.

A day before the protest marked the seventy-third year of the Nakba, which occurred on May 15, 1948, when around 700,000 Palestinians were displaced from their homeland as a result of Israel’s declaration of independence and formation of a state. The protest was advertised with the hashtag #Nakba73 and highlighted how the Nabka was not a one-day occurrence in 1948, but the beginning of a larger movement aimed at the displacement of the Palestinians. 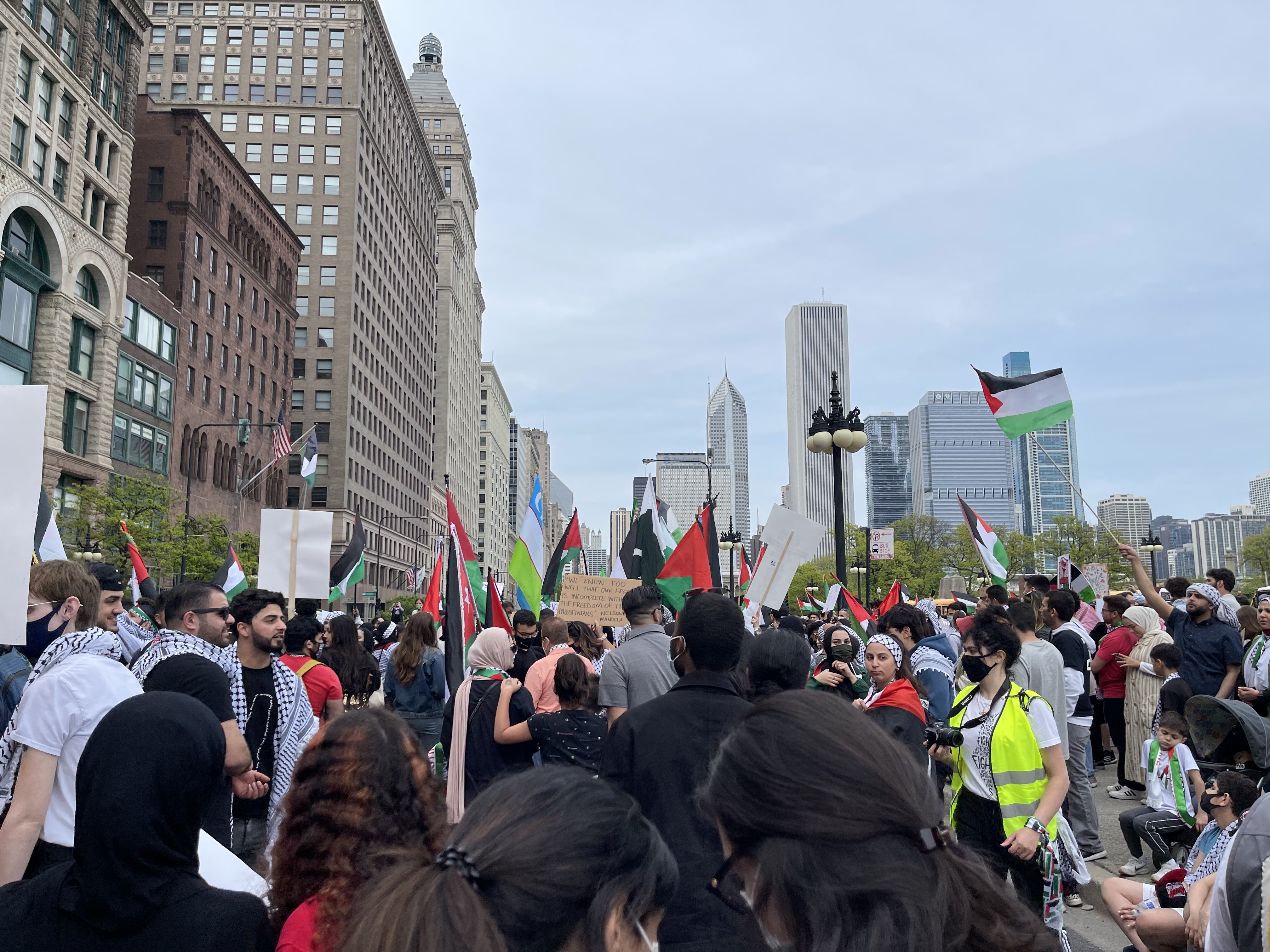 Chicago is one of the many cities across the United States and around the world protesting in solidarity with the Palestinian people.

The protests have caught the attention of world leaders and elected officials across the globe. Countries like Pakistan and Turkey have expressed their support for Palestine. President Joe Biden, however, has maintained his stance on Israel’s right to defend itself, and has expressed support, but has not demanded, a cease-fire and recently approved a $735 million weapons sale to Israel, further dividing his own Democratic party. As of Friday morning, a cease-fire between Israel and Hamas went into effect.

Democratic Congresswoman Rashida Tlaib, a Palestinian-American serving the state of Michigan, tearfully spoke on the House floor on Friday, May 14, discussing her identity as the only Palestinian member of Congress and the government’s “unconditional” support of the “apartheid state” of Israel. Tlaib was supported by members of her “squad,” a group of progressive women of color elected to Congress in 2018.

Illinois Congresswoman Jan Schakowsky, who represents the 9th District, had called for an immediate ceasefire with her Democratic colleagues, in addition to expressing support for the families of Sheikh Jarrah.

This protest was the second that the city of Chicago had recently seen in support of Palestine. The first occurred on Wednesday, May 12. Starting at Michigan and Congress, protestors made sure to stop and protest in front of the Israeli Embassy of Chicago.

Students for Justice in Palestine (SJP) Chicago has advertised two more events since the protest on Sunday — a Vigil for Palestine was held on Thursday, May 20, from 7-8:30 p.m. and a third protest to take place the next day on Michigan Avenue and Ida B. Wells Drive at 4:30 p.m.

Incoming transfer student Hadeel Hashlamoun reflected on her Palestinian identity and what these protests meant for her and fellow Palestinians.

“As a Palestinian, watching the news and seeing what’s happening back home is shattering,” Hashlamoun said, comparing it to the feeling of “being in jail” and “watching a family member suffer in front of you.”

“But again, you are completely helpless,” Hashlamoun continued.

She noted that while donations and raising awareness are a great way to help, she and fellow Palesintians want to physically do something as well. 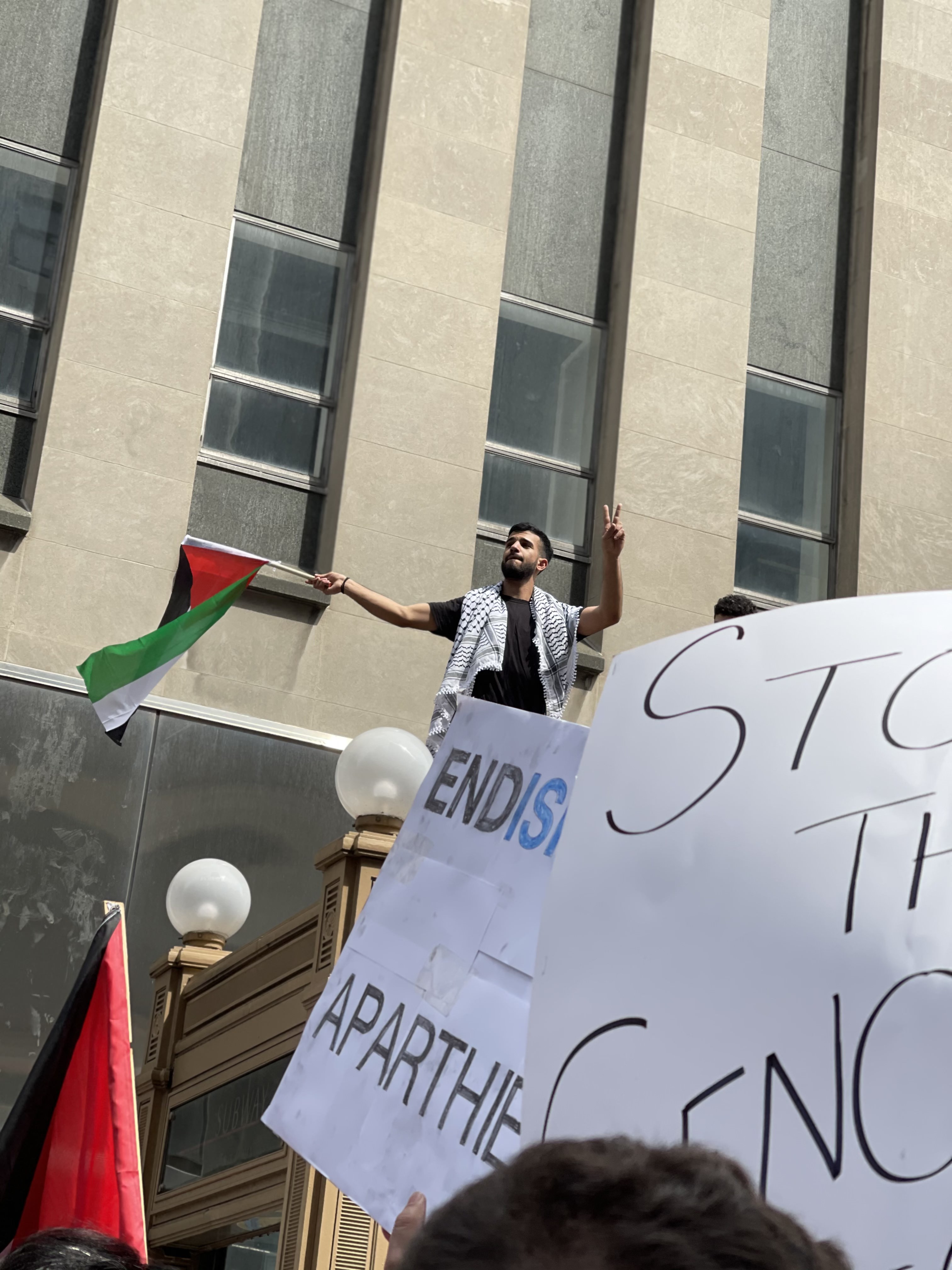 “Our hearts are filled with the desire to fight. The protests are like an outlet to that desire. We pour our hearts out while screaming ‘Free Palestine,’” Hashlamoun said. She noted that despite the diversity in the crowd, she felt the unity within the chants.

“While I was there, not for a second did I feel like or even remember that not everyone there is Palestinian.”

Hashlamouon also mentioned the recent attacks on the media in Palestine –– namely, the destruction of an office building in the Gaza Strip that housed AP News and Al Jazeera.

“I feel like we are the media now,” she emphasized, adding, “we should spread awareness about the reality of this crisis, and of course, protests are a great way to catch people’s attention.”

DePaul junior Sandrine Haas was also among the crowd as her two closest friends are of Palestinian ethnicity.

“I have seen upfront their struggle to find their own identities within a diaspora that’s struggled to exist against Israeli erasure,” Haas said.

In addition, Haas recalled how her Palestinian friends were present in support of the movement to Stop Asian Hate, “so the solidarity as we fight against white colonialism and supremacy also led me to join the #FreePalestine movement.”

Haas identifies herself as a “Chinese-Korean woman raised in a Jewish-Christian household with a Canadian mother and an American father and adopted siblings.” She believes her identity and passion for social justice issues as well as criminal and immigration law allows her to be intersectional with understanding the struggles of other minorities and being an ally.

Haas stands firm on her pro-Palestine position. The clash of identities has been a major topic of conversation when discussing the situation in Palestine.

“There’s a difference between Jewish people and the Israeli government,” Haas said. “But at the same time, there has to be an acknowledgement that to be anti-Zionist is not the same as being anti-Semitic,” she continued, referencing a common misconception. “They are separate entities, as Zionism literally harms the Palestinian population.”

“As a person from a ‘colonized’ country,” Sansano said –– noting her Filipino identity and Hawaiian upbringing –– “it is my responsibility to show up and fulfill the meaning of solidarity.”

Sansano said that this goes beyond just attending a protest.

“To me, there is no debate on what side I should take. ‘Free Palestine’ means supporting Palestinians in their right to sovereignty against settler-colonialism, apartheid, and ethnic cleansing.”

Recent UIC graduate Zahra Ali was “haunted” by the fact that living in the United States means her taxes are funding the Israeli violence against Palestinians, noting that participating in the protest was one of the bare minimum actions she could take. Other actions taken by her and her family included boycotting Israeli products, donating to areas that are devastated by the attacks, and using social media to “expose” the actions of the Israeli government to the world.

“Settler-colonial violence is definitely not a new phenomenon,” Ali noted. “But it’s been motivating to see increased public awareness about Israel’s crimes in the last few weeks.”

Ali also reflects on how her Muslim identity plays a role in her advocacy for Palestine.

“My religion teaches me to take any action that I can to support the rights of the oppressed,” she said. “So as long as I am alive I will continue to support the liberation of Palestine and colonized peoples all over the world, in sha Allah (God willing).”