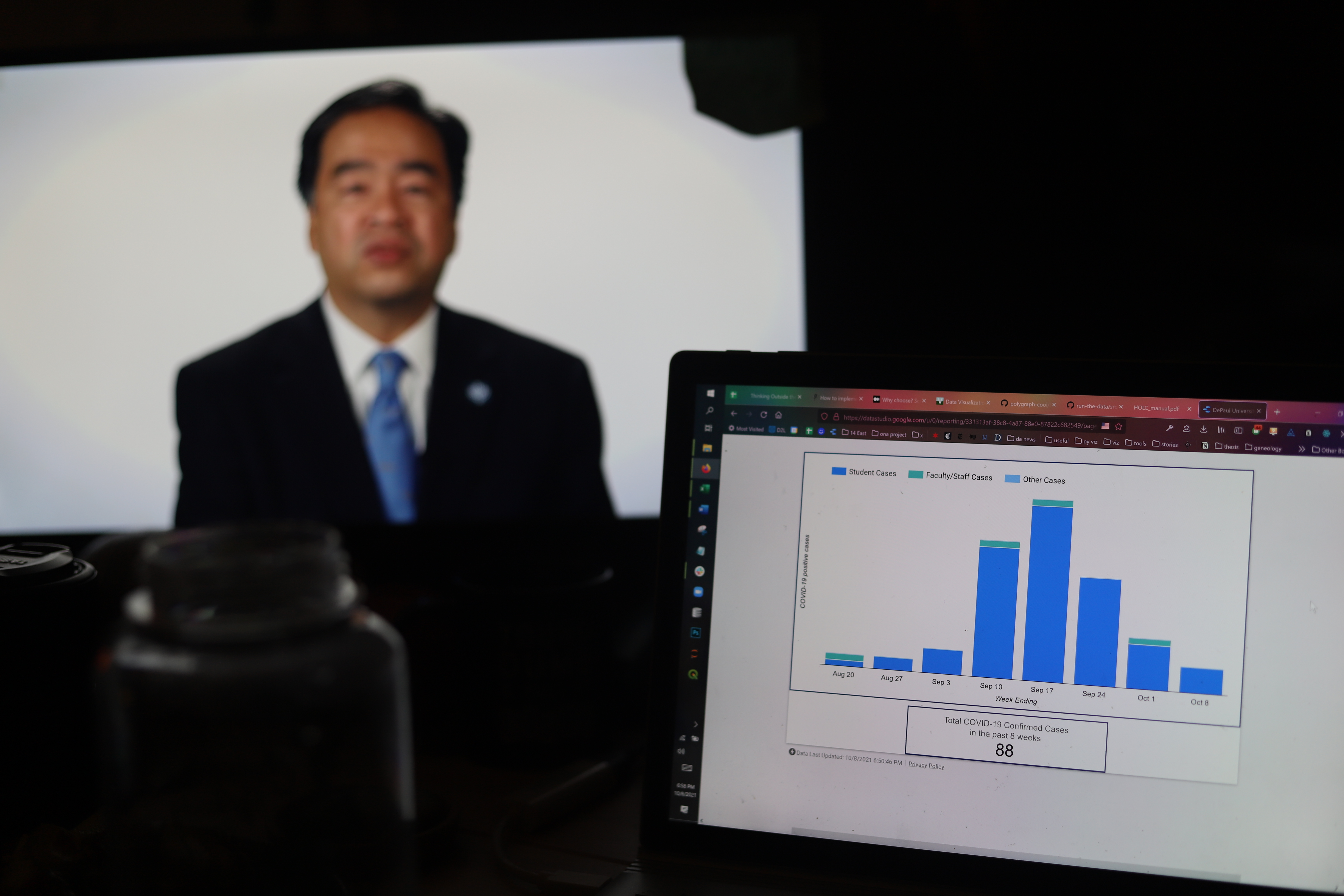 Only one member of faculty consulted on moving classes online — “I think it is disappointing that faculty were not ‘in the room where it happened’.”

Last Friday, university officials announced that classes at DePaul would move online for the first two weeks of Winter Quarter. Though this news came as a shock to students, most  faculty members were also blindsided by the decision.

In an email sent to DePaul students, faculty and staff, DePaul President A. Gabriel Esteban and Provost Salma Ghanem wrote that from January 3 to January 15, classes would be held online in an effort to curb the spread of COVID-19.

Despite the change being such a big decision, members of Faculty Council say they were not aware of the university’s plans for Winter Quarter.

“Unfortunately, the decision was made without Faculty Council leadership knowledge or input,” wrote Faculty Council President Sonia Soltero in an email to 14 East. “As the faculty president, I was notified Thursday that the announcement would be going public on Friday.”

Soltero also expressed concern that she and other members of the Faculty Council were not consulted on the matter — a violation of the university’s shared governance policy.

“What I find perplexing, once again, is that upper administration seems to be doubling down on leaving out faculty expertise.”

“The Faculty Council Leadership should have been consulted, per shared governance principles, as well as the faculty handbook that stipulates that the faculty’s primary responsibilities are teaching, delivering the curriculum and the academic calendar.”

In an email to 14 East, Jay Baglia, chair of the DePaul Health Committee, a Faculty Council subcommittee, said that his group was also left in the dark.

“I can tell you that neither DePaul Health nor Faculty Council leadership was included in this decision,” wrote Baglia. “What I find perplexing, once again, is that upper administration seems to be doubling down on leaving out faculty expertise.”

However, according to Mary Hansen, a spokesperson for the university, administration did consult faculty.

“DePaul’s leadership made the decision to move courses online for the first two weeks of Winter Quarter after considering input from the university’s Community Health Team, which includes a DePaul faculty member.”

Craig Klugman, a bioethicist and professor of health sciences at DePaul, is the sole faculty member on the Community Health Team — making him the only faculty member whose input was considered in the Winter Quarter decision. He says in the Community Health Team’s meeting with Vice President of Student Affairs Gene Zdziarski last week, the topic of moving classes online was discussed.

“In our last meeting, I presented an update on the appearance of Omicron and what little we know about it. We discussed some possible actions the university could take, including a virtual start to the term, requiring boosters, and more. What Dr. Zdziarski chose to take to [the] cabinet and the administration, I do not know.”

As the sole faculty member whose input was considered by administration, Klugman believes that Faculty Council should have had a say in the matter.

“According to the American Association of University Professors and even President Esteban, faculty have primary governance over academic and curricular matters,” wrote Klugman. “Since the calendar and scheduling falls under those areas, one would think that Faculty Council would have been part of the discussion. I think it is disappointing that faculty were not ‘in the room where it happened’.” 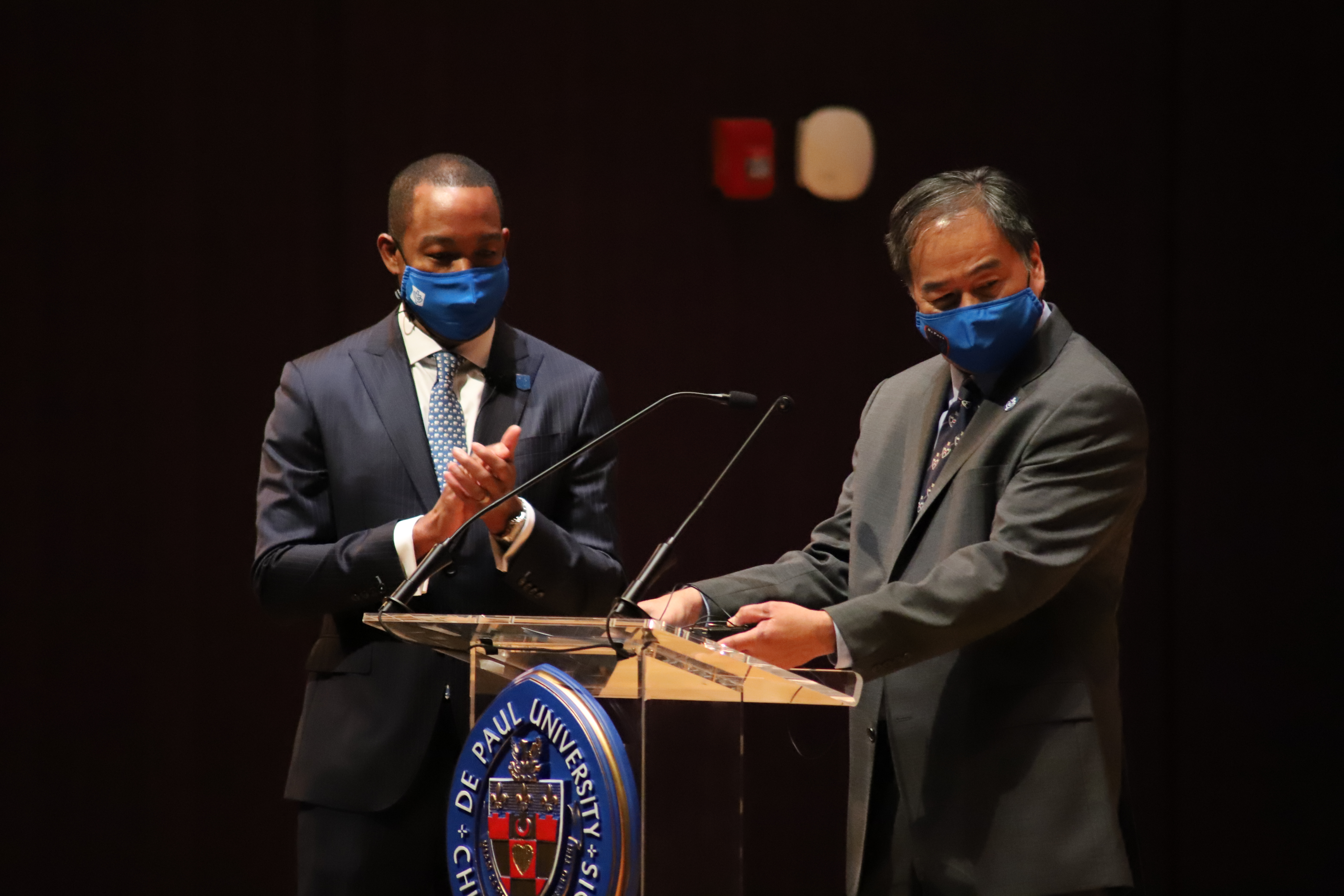 President Gabriel Esteban and Steve Stoute, the VP of Strategic Initiatives and the university’s chief of staff, listen to faculty questions at the 2021 State of the University held at the start of Fall Quarter. Photo by Cam Rodriguez, 14 East

In their announcement, President Esteban and Provost Ghanem cited the emerging omicron variant and the potential surge in COVID-19 cases during the holidays as reasons for moving classes online.

Just this week, the first case of the omicron variant was detected in Chicago and last week, both the city and state saw a surge in COVID-19 cases.

Even so, faculty members like Baglia believe the decision was rash.

“I think the decision was premature for a couple of reasons,” he stated. “The first reason is that the CDC is probably a week to two weeks away from knowing how our vaccination status, with and without boosters, might manage the omicron variant.”

“The second reason I think this decision was premature is because while it is entirely plausible that a winter surge could move classes online, there is no evidence yet that the speed of spread is matched by severity.”

“It’s still at least a week before we have scientific evidence of what Omicron does in regards to being infectious, to what it does to the body, to whether it increases hospitalizations and deaths [and] to how effective our current vaccines are,” wrote Klugman. “The problem is that if we waited until we had all of that information, then we would be at one to two weeks before the term started and faculty would need to scramble to re-do the first two weeks of classes, and students might have to change their plans.”

“The decision was motivated by several factors: the proximity of DePaul’s start of classes to holiday gatherings and travel; unknowns associated with the omicron variant; and the desire to give faculty ample time to prepare. Timing was the largest factor. Health professionals expect cases to rise in the time immediately following the winter holidays, when more people are gathering indoors to socialize and celebrate. By starting DePaul’s Winter Quarter with two weeks of remote courses, we are trying to mitigate the potential spread of COVID-19 so we can carry on with the rest of the academic year in person.”

Klugman agrees on this point.

“This choice allowed us to inform people so they can prepare and also gave us time to see what the scientific data on Omicron is,” he wrote. “The two weeks means people can still enjoy New Year’s Eve and have time to get tested before returning to campus.” 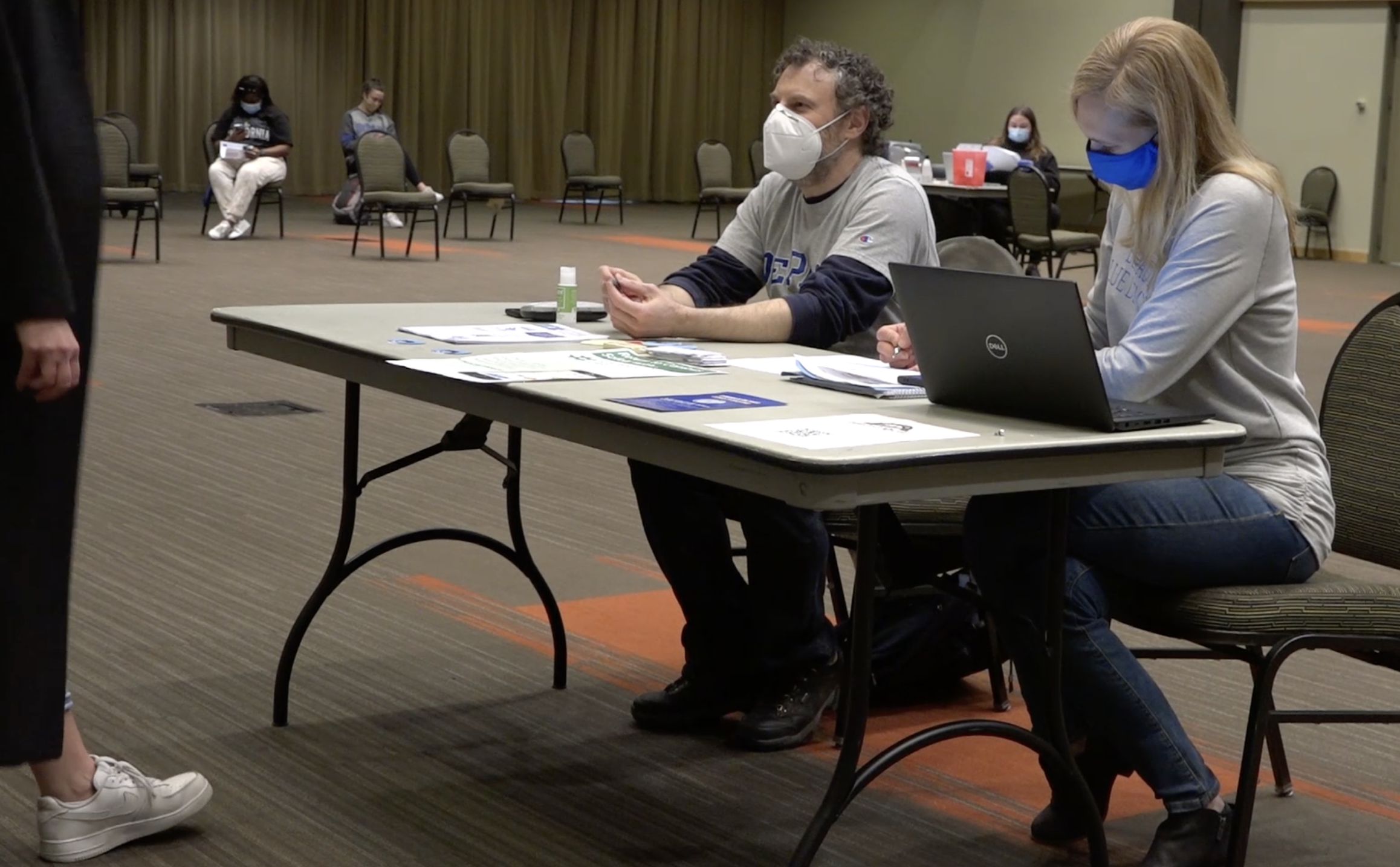 Craig Klugman, a professor of health sciences, and Cheryl Hover, the associate director of emergency management at DePaul, check students in at the university’s vaccine clinic in April 2021. Photo by Claire Malon, 14 East.

Hansen says that the university is currently not requiring students, staff and faculty to get their boosters for the upcoming quarter, despite both the Chicago Department of Public Health and the Centers for Disease Control and Prevention recommending that everyone age 18 and older should receive a booster shot.*

Because of this, Baglia doesn’t understand why administration will not enforce a booster requirement.

“The CDC is encouraging all adults to get the booster. Why DePaul isn’t requiring it, but is moving courses online for the first two weeks, is perplexing,” stated Baglia. “It just doesn’t make any sense to me.”

Hansen, however, argues that the university is following CDPH guidance, encouraging those in the DePaul community to receive the booster shot if they are eligible.

“DePaul is aligned with the Chicago Department of Public Health in our strong recommendation to students, faculty and staff that they get a COVID vaccine booster as soon as they are eligible,” she wrote.

Klugman believes boosters could be the best way to prevent new variants and to protect ourselves against COVID-19. Because of this, he says in his positions within the university, he will continue to advocate for a campus-wide booster requirement.

“With Omicron, I think ensuring boosters may be the best way to protect ourselves,” he wrote. “In the Community Health Group, we will still continue discussing a booster requirement.”

*DePaul is not requiring students, faculty and staff at this time to get a COVID-19 booster shot. The story originally said that DePaul does not plan to require boosters for the upcoming quarter.