5 Takeaways from Our Data Jour..

More Bargaining and No Work: U.. 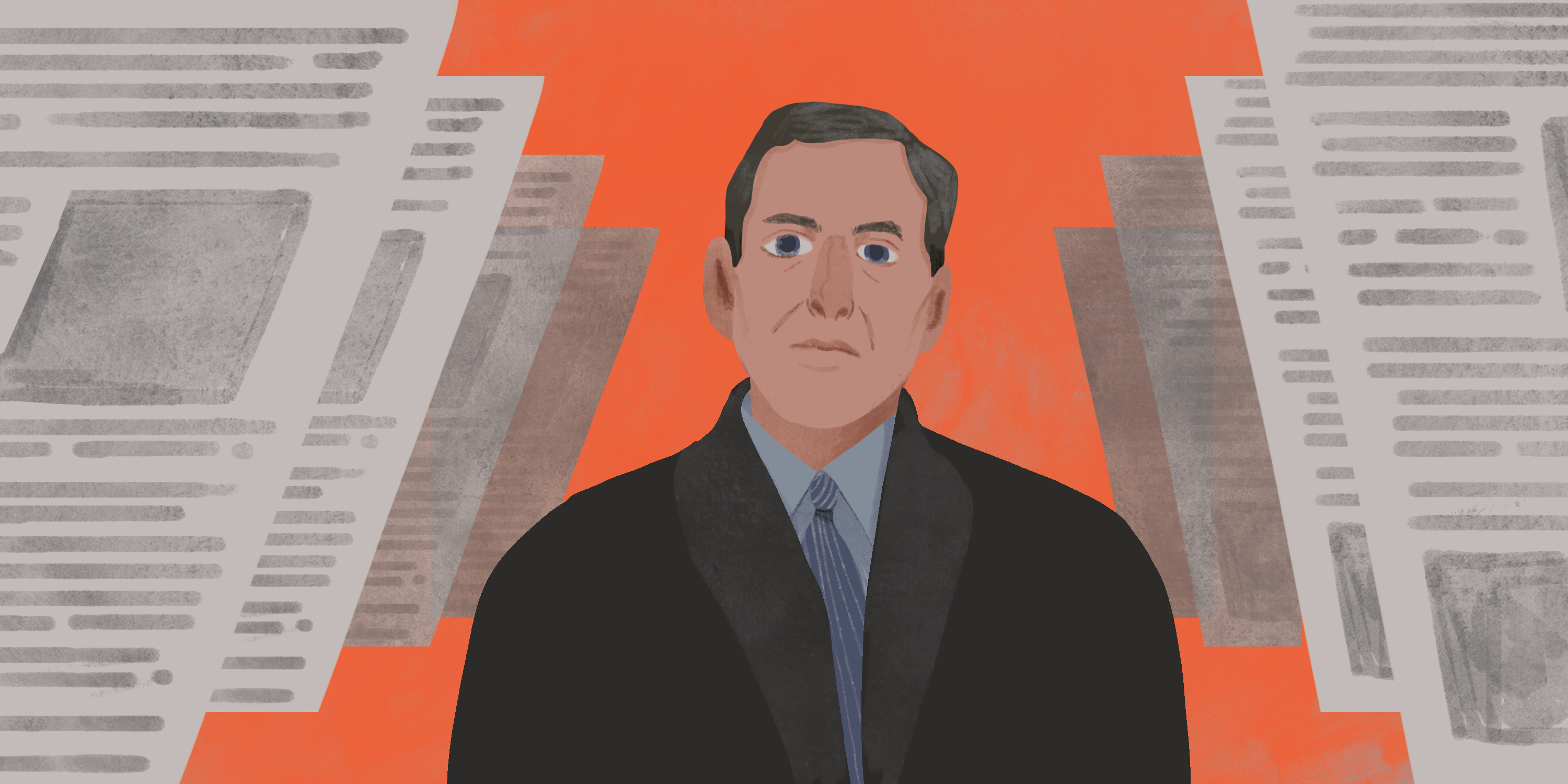 This story is co-published with the Chicago Reader.

As we went to press with this issue, the Tribune reported that Reader co-owner Leonard C. Goodman, as well as board members Dorothy Leavell, Sladjana Vuckovic, and Carol Bell, stepped down on Tuesday. The move will allow the transition to a nonprofit to proceed.

On April 21 — an unseasonably warm day — the Reader’s editorial union, staff and supporters held a rally outside co-owner Leonard C. Goodman’s home, with signs that read: “Len Goodman, Local Bad Man,” “Let My Paper Go,” and “Save the Reader,” among many others. The rally was held a day before the Reader staff members received their last guaranteed paycheck, launching the 35-plus staffers into further uncertainty.

The Reader and its editorial union are close to a much-anticipated transition from its for-profit company to a new nonprofit organization called the Reader Institute for Community Journalism (RICJ).

However, the process stalled in December after the Reader published a column by Goodman, who began writing for the paper after he acquired it with developer Elzie Higginbottom in 2018 for a dollar; the pair assumed the paper’s debts and kept it alive.

In the November column, Goodman questioned the efficacy of COVID-19 vaccines for children. After its publication, Reader staffers and readers raised concerns that the column presented misinformation, and management pushed to publish an independent fact-check of the column. Goodman disagreed, and Reader board members Dorothy Leavell and Sladjana Vuckovic introduced resolutions to force the newspaper to adopt an anti-censorship mission statement.

The nonprofit transition has stalled since then. The fact-check has not yet been made public and Goodman’s column remains online as published.

Because the for-profit company is running out of payroll funds, the Reader union decided to call attention to the stalemate with the public demonstration.

Several days before the rally, Goodman tweeted that the Reader is unable to see “opposing points of view.”

Goodman did not respond to 14 East’s request for comment by the time of publication.

Yasmin Zacaria Mikhaiel, an adjunct theater professor at DePaul University who has a background in dramaturgy, didn’t realize their position of audience engagement manager at the Reader was their dream job until they were offered it. Hired in September 2021 for the newly created position, Mikhaiel said it speaks to the growth period that the Reader had recently begun despite “untenable conditions” created by COVID-19.

In speeches at the rally, Reader staffers noted the increased difficulty of completing their jobs while the fate of their jobs hangs in the balance. This is especially the case with Mikhaiel, whose job description includes strategizing around the newspaper’s future growth. They said that for many of those employed by the Reader, their roles have turned into ones of advocacy.

“Since the situation started in November, it’s been handling a lot of some of those crisis communications that have swirled around the Reader and doing a lot of advocacy work internally and ensuring that our writers — [and] that our writing still matters, and that we have audiences that believe in us and that we can still be doing our jobs even if we’re very burned out and understaffed,” Mikhaiel said.

As chants of “Free the Reader” died down at the rally, Reader union chair Philip Montoro led a press conference with staff, supporters and journalists from all over the city.

“If I wasn’t here, I’d be writing about tortilleria workers in Brighton Park organizing against their greedy employers,” staff writer Kelly Garcia said during the press conference. “But instead here I am doing the same.” 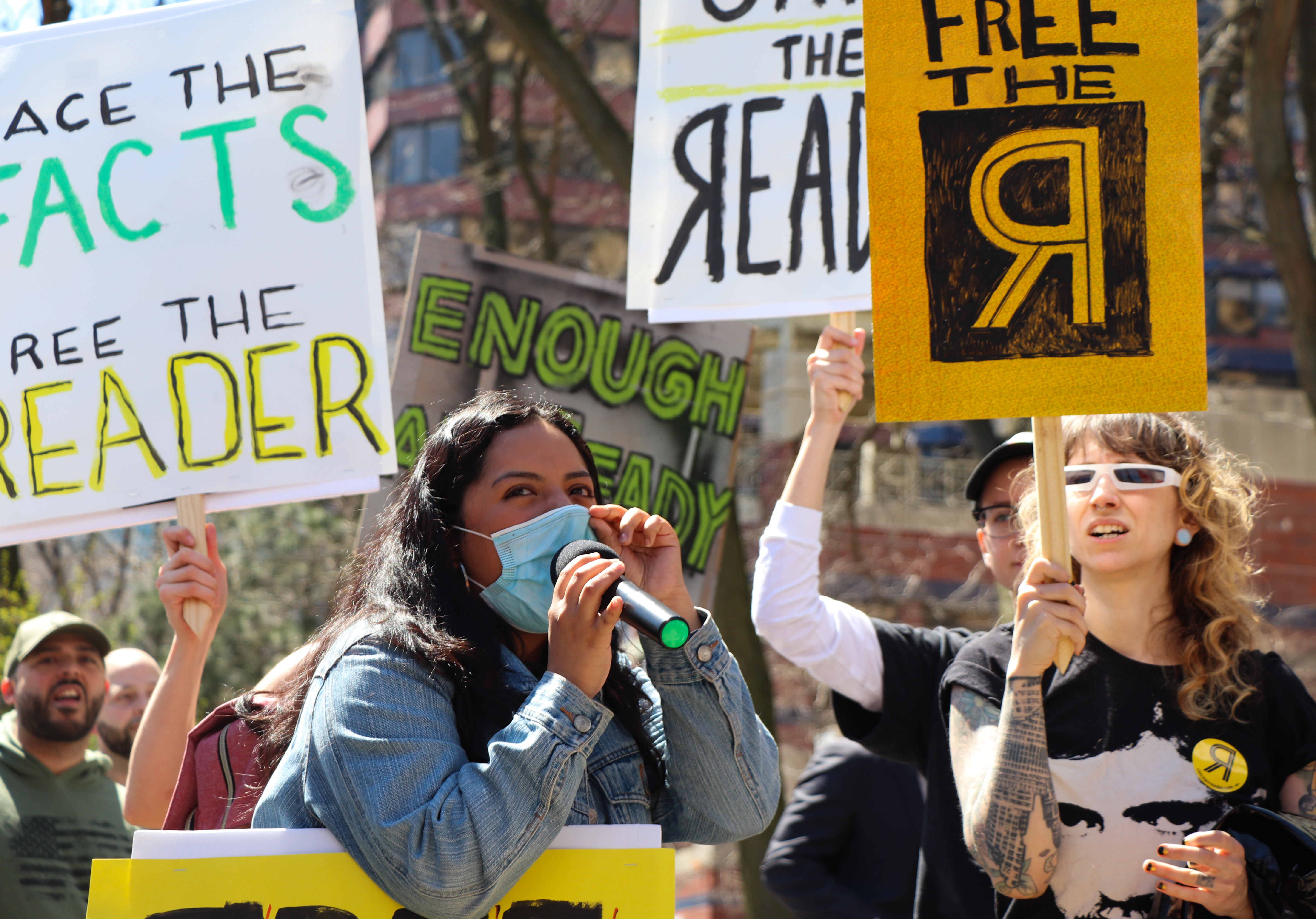 Garcia works in the Reader’s Racial Justice Reporting Hub and Writers Room, a team that freelance Reader contributor Taylor Moore said is “hanging in the balance because of Len Goodman.”

After the press conference, Brandon Pope, the president of the National Association of Black Journalists Chicago Chapter, chatted with colleagues near Goodman’s home.

“The Reader has been a pivotal voice for diverse communities, but specifically, the Black community and Black voices of all types, especially Black queer voices throughout our city,” he said. “By cutting the Reader’s ability to become a nonprofit, or stalling when it comes to it, it hurts the ability of these amazing writers to do what they’re here to do. And that’s [to] advocate for our communities and be there for our communities.” 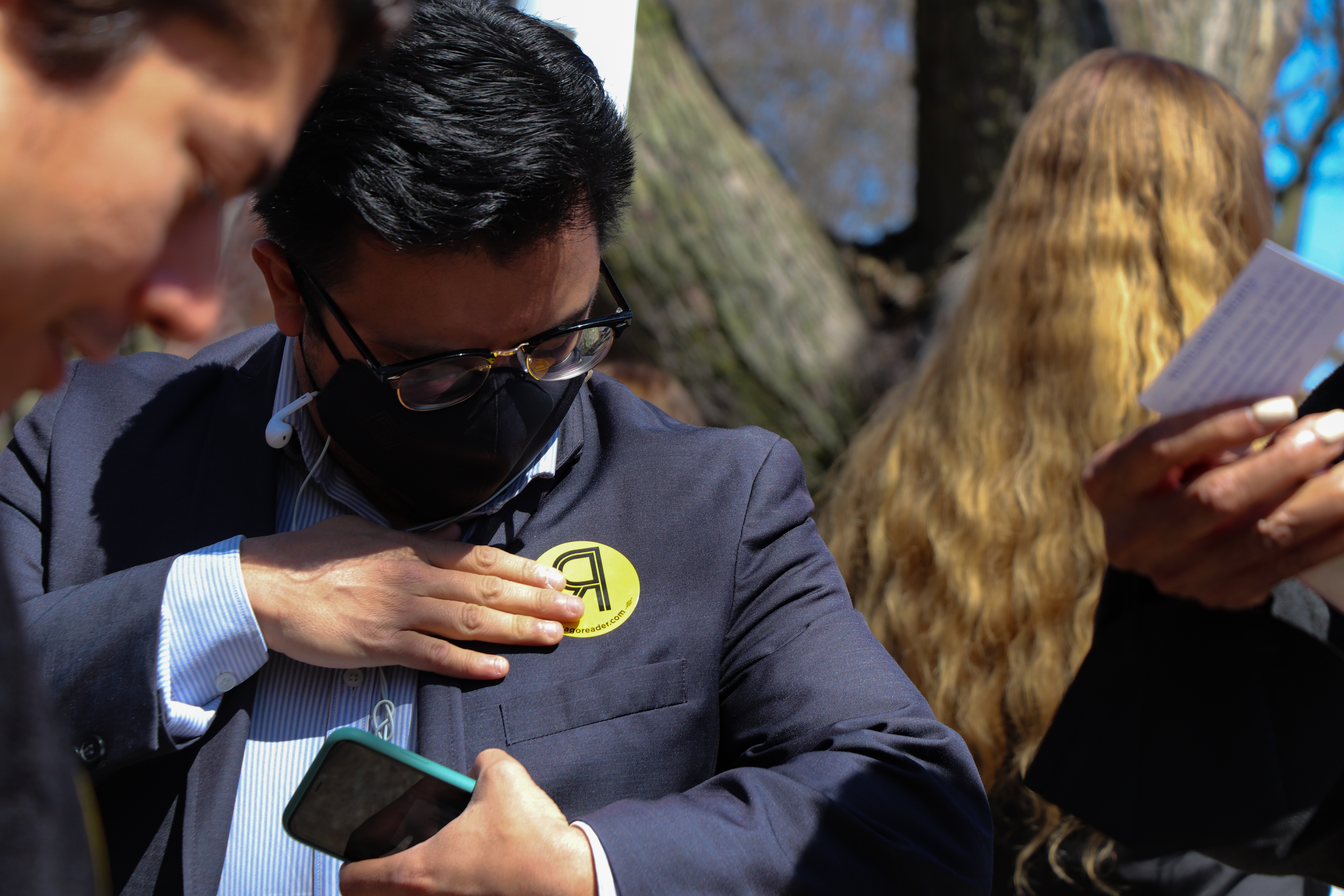 Of the dozens of people gathered outside of Goodman’s home were those who signed an “Open letter to Len Goodman from Chicago journalists,” published by the Reader Union on April 20. As of Monday, the letter had garnered nearly 400 signatures from fellow journalists, writers, and creatives from across the country.

Among the signees was Chicago-born filmmaker Lilly Wachowski, who also attended the rally. A self-proclaimed lifelong lover of the Reader, Wachowski has come out in full support of the paper and its staff and thinks that Goodman’s actions are, in a word, hypocritical.

“I’m standing with folks who are just trying to make their way in the world and for somebody who is, like, purporting to be all about free speech. That doesn’t seem like it’s their main motivation,” she said of Goodman.

“When you think about this newspaper on the brink of collapse, that does so much in the name of free speech and journalism, I think that Len Goodman’s motives are highly questionable.”

Beyond that, Wachowski’s connection to the Reader is personal. In 2016, Wachowski went to Reader publisher and president Tracy Baim to publish her public statement in the Windy City Times, in which she came out as transgender after other media outlets threatened to out her.

“I knew that were I to let the sort of media nature take its course, it would have been an extremely traumatic experience for me, and so I went to Tracy because I knew, or I have a pretty good idea of how much integrity she has, as a journalist and as a human being,”  Wachowski said.

“I couldn’t have really asked for a better person to help me get that media statement out into the world.”

Her criticism of Goodman is rooted in her love for the Reader and also comes from her experience as a board member of Brave Space Alliance, Chicago’s first Black and trans-led LGBTQ+ center. 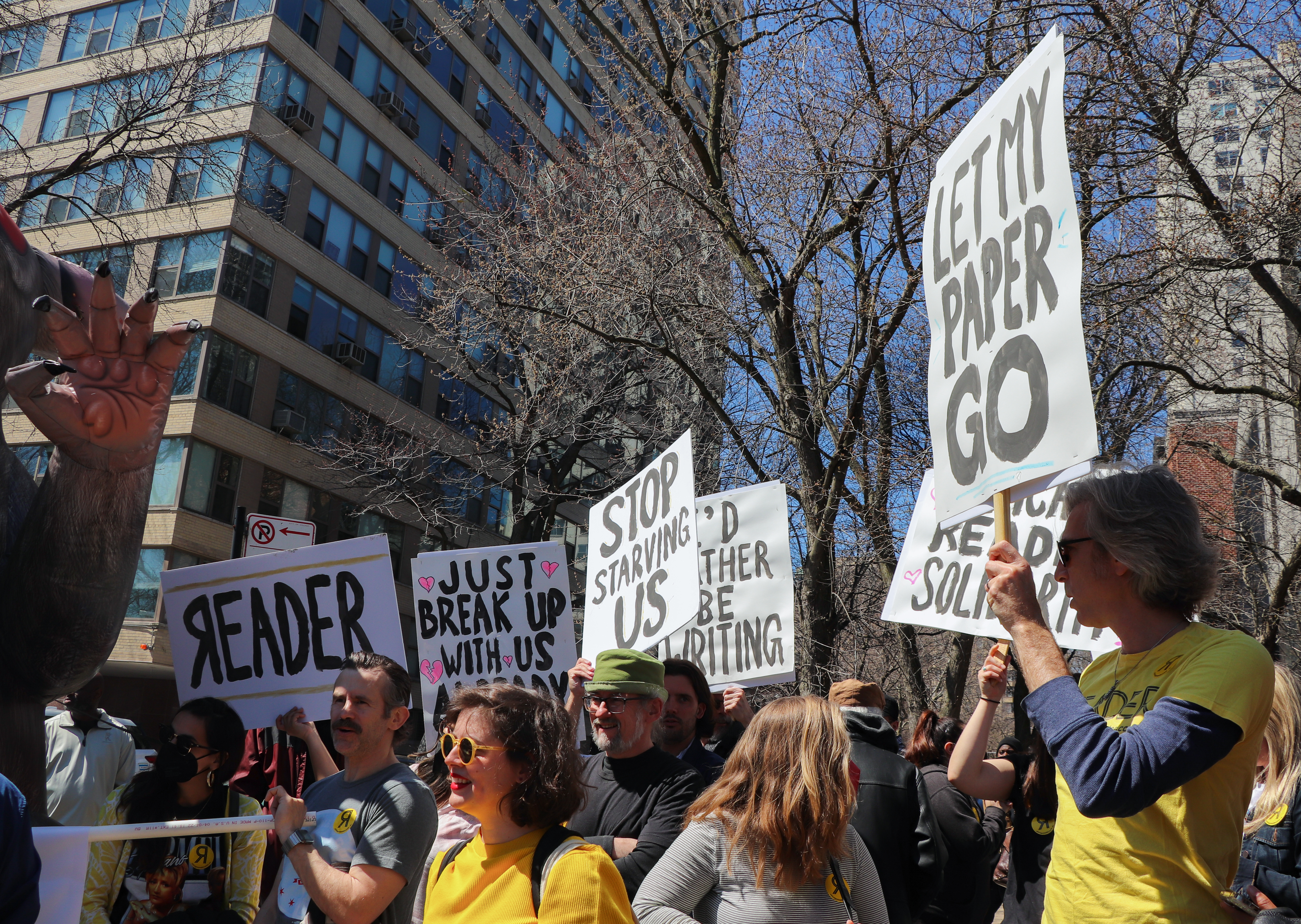 Another signee was DePaul adjunct journalism professor Evan F. Moore, a former Sun-Times reporter. Raised on the Reader, the South Shore native said it felt only right when he began contributing to it in 2016.

For Moore, the Reader had been a place where he could take ideas that are different, that other publications may not be willing to publish or take a chance on.

Growing up, he saw a kind of hyperlocal representation in the Reader that he didn’t see in other major publications. Coming from a family that included members of the Nation of Islam and Black Panthers, he grew up seeing a reflection of his experience that he didn’t see elsewhere.

“I was always interested in what they’re talking about. And you saw things you didn’t see in the Tribune or the Sun-Times and other places,” he said.

But his support goes beyond his admiration and appreciation for the Reader — it extends to a belief in nonprofit news. He compared the current battle with Goodman to that of DNAinfo’s shuttering by its billionaire owner (and Cubs owner) Joe Ricketts over four years prior.

He vividly remembers the day when Ricketts shut down the publication’s website and he saw his stories vanish from the Internet — records of all the times he spent with sources, completely gone.

“[This is] what happens . . . where you allow the folks who are millionaires and billionaires, who aren’t news people, who just kind of look at it like it’s a play thing or a record or something, treat it like a pair of shoes or something like that,” he said.

Bob Reiter, president of the Chicago Federation of Labor, said he was appointed to the for-profit company’s board by Reader co-owner Elzie Higginbottom, and elected to the nonprofit board via a majority 5-3 vote. According to Reiter, nine out of 11 board members, including himself and its chair, have already been elected to RICJ’s board.

Reiter said he believes that Goodman wants to pick not two but three new members to the nonprofit board to ensure more editorial control by appointing representatives who might vote in his interests.

The Washington Post reported on April 22 that Goodman was set to meet with Higginbottom on Saturday morning to discuss the publication’s fate. Reiter said he was invited by Higginbottom, but received an email Friday night that Byrne declined the meeting on Goodman’s behalf because Reiter, a labor attorney and negotiator, would be there.

Over the weekend, Byrne, Goodman, and Reiter traded barbs on Twitter over who was at fault for torpedoing the planned rapprochement. 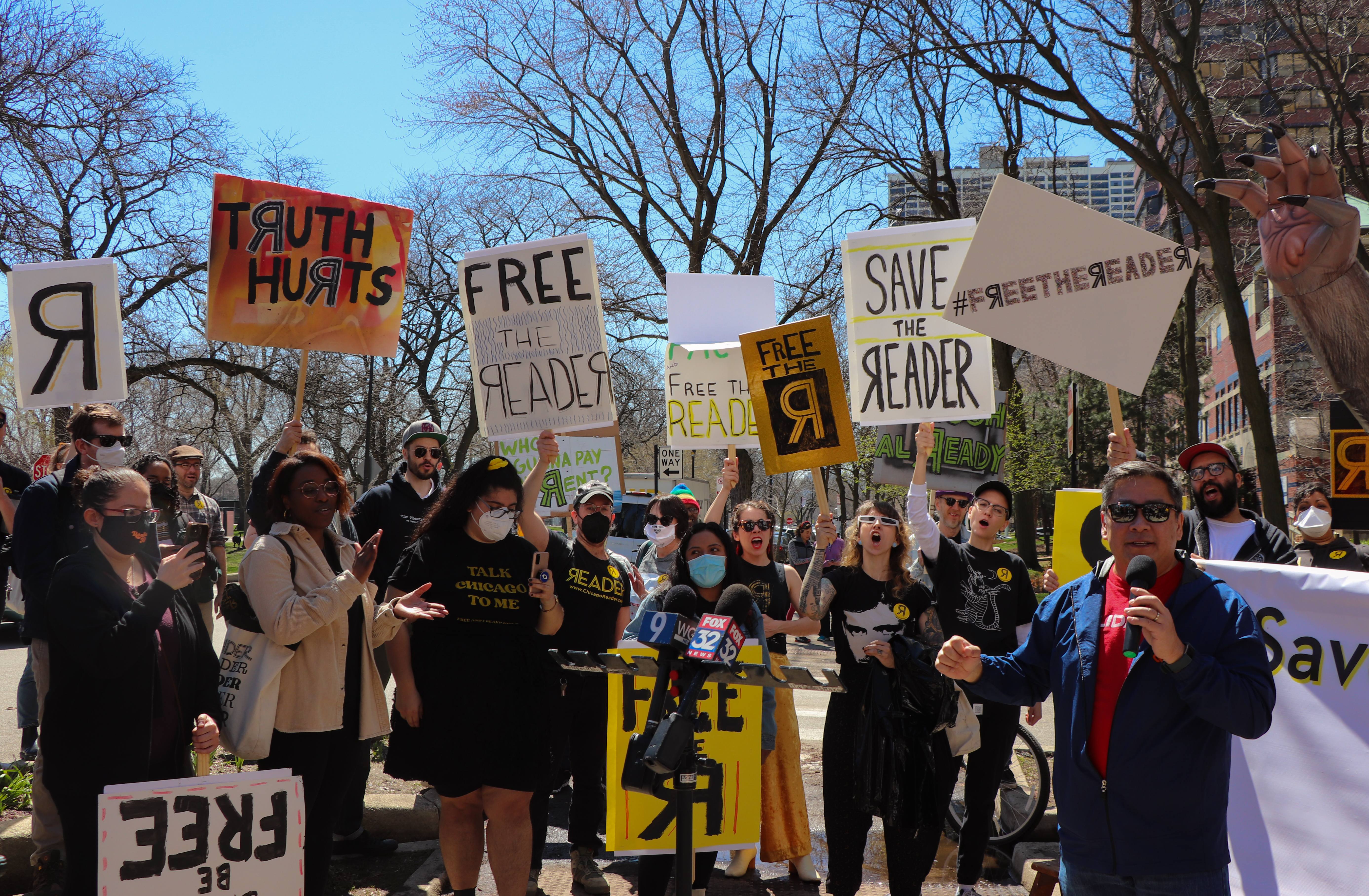 “This is a heartbreaking situation that all these folks have been put in,” Wachowski said. “That the Reader had found a path forward out of the for-profit model, there was a sustainable path forward. I can see that it’s about to fold again, it just makes me sick to my stomach.

“And I’m just an outsider, I can’t imagine how people feel, people who work at the Reader. My heart goes out to them.”

Before the rally, Mikhaiel was feeling similar emotions, but they said that action provided them with a sense of empowerment.

“We had really great union support getting us here and it’s just been a wonderful feeling of support from the community and listening about the legacy that’s happening,” they said. “But we still are going to capitalize on the momentum that we’ve really showed up for today.”