The Sapphic Guide to Dating

Cutting Through History With Poetry

Cutting Through History With Poetry 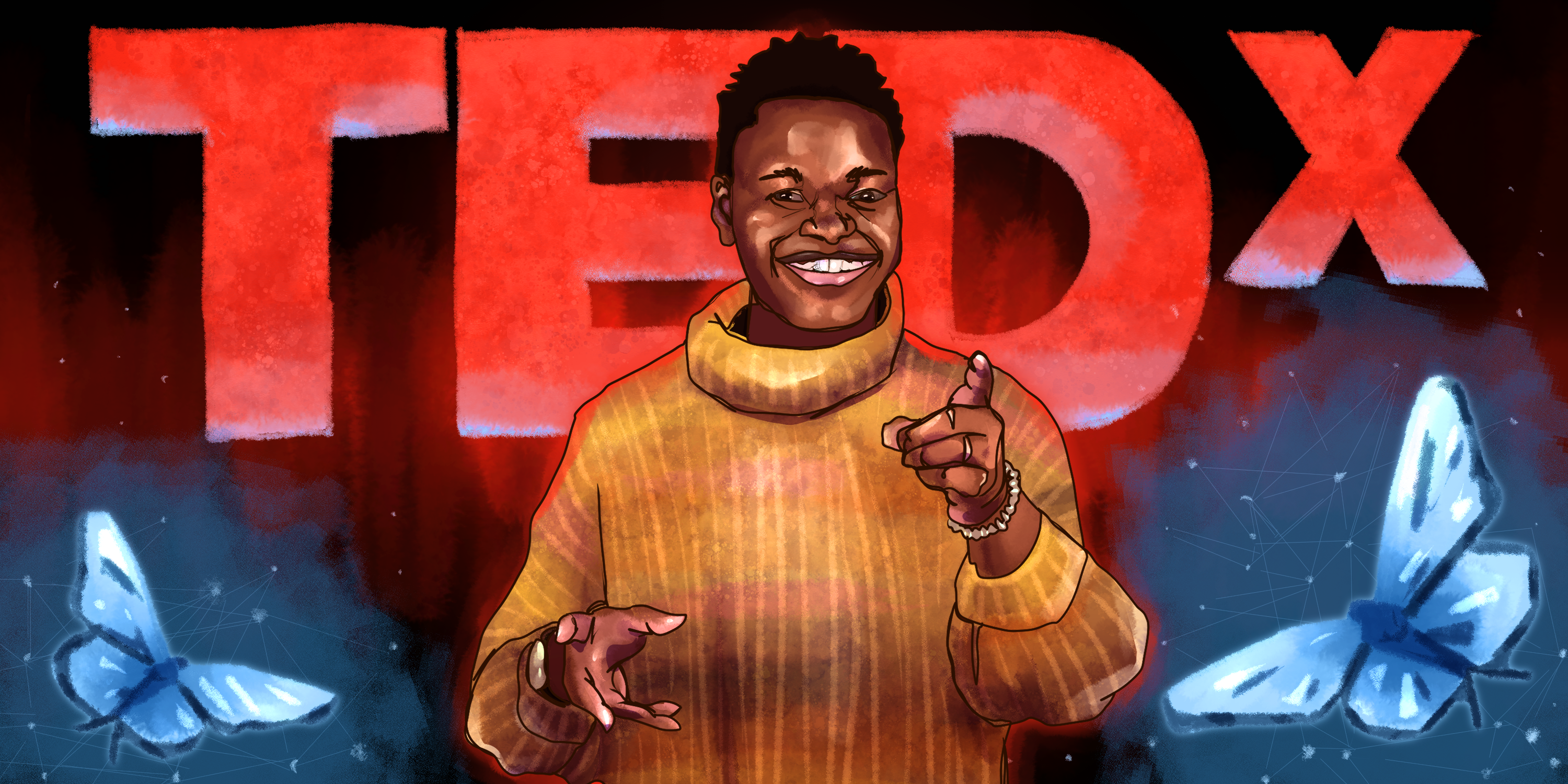 “At the end that’s what I want …  a metamorphosis, a real paradigm shift about the way we talk about race, sexuality and religion.”

This piece contains interactive audio that is integral to the story. Press play when directed.

On May 4 in the respected Holtschneider Performance Center at TEDxDePaulUniversity, freshman Isaiah Boozer, dressed in fiery red, performed spoken word poetry about homophobia and sexuality in Black communities. Boozer advocated for more acceptance towards the LGBTQ+ community while simultaneously having the TEDx audience question their own biases. “Hold a mirror back up to our society and make it reflect. And in the reflection, we can find the discrepancies and commonalities in our beliefs,” he said.

Pursuing a major in playwriting at The Theater School, Boozer is regularly engaging in creative avenues like filmmaking, screenwriting and dancing. Although varying art forms, poetry is the connecting force of all these. He even claims to have a “poetic soul,” which allows him to experience his feelings through these art forms and guide him through difficulties that led him to share his emotions with the world.

He considers poetry as his gift. “Imagine being able to say everything you’ve wanted to ever say perfectly,” he said. “That’s the artistry and that’s what comes out of me.”

The TEDx stage gave him that opportunity. Following this year’s theme of “Metamorphosis,” his goal was to give the audience a different outlook on the LGBTQ+ community. For him, the theme resembles a positive transformation, whether physically or mentally, which led him to write his poem entitled “20.13” — referencing the Bible verse Leviticus 20:13, which he thinks is about homosexuality being a sin.

Prior to the performance, Bobby Strong, Boozer’s cousin said, “I believe he will blow people’s minds with his intellectual way of articulating what he wants to say.”

All throughout his performance, he spoke on behalf of the communities he’s a part of, as someone who identifies as Black and queer. Boozer discussed that Black people faced intergenerational racialized trauma due to colonization.

Through metaphors and alterations, he further explained that Black Americans have become homophobic due to colonization following Christianity.

“Ancient Africa had to pay the price of the lives that White people used to scrutinize and colonize,” Boozer said.

He wants his poem to display the past, present and future of racialized trauma. He hopes his words can blossom into support for Black queer people who’ve been hurt and acknowledge who should be held accountable for this abuse.

“At the end, that’s what I want, …a metamorphosis, a real paradigm shift about the way we talk about race, sexuality and religion,” Boozer said.

He is passionate about this topic because he has seen Black queer people be banished from their families and kicked out of their homes. He has seen the harm done to Black queer bodies and knows the toll it takes on one’s mental health. Although it gives him pain, he holds this history close to his heart and wants to fight it and be heard.

“There were moments where I was crying while writing it because I was like, god, this hurts to say, but the truth hurts,” Boozer said.

Being a TEDx speaker gave him the platform to educate the DePaul community, but also to ask for emotional support for Black queer communities from the audience.

Boozer’s friend Evan Ozer was the second person who found out about Boozer’s TEDx talk. The first person Boozer told was his mom.

“We were at a Thai restaurant and he sat me down and he told me only his mom knew this, so I was, oh no, what is this? Is he okay,” he recalled. “When I first met Isaiah, I could immediately tell he was different — that he was a natural-born storyteller from the way he handled himself and expressed how he was feeling.”

It seemed like the chance for Boozer to express his truth and story was meant for him. Weeks before receiving the approval of his talk, Boozer saw “affirming” signs that the stage was waiting for him. Boozer ran into TEDx stickers, posters and finally the big red X — the TEDx logo. For him, these coincidences seemed too consistent and from there, he felt that the universe was putting this opportunity in his hands.

Before he ended his time on stage, he gave call-to-action steps to stop performative activism and actively make changes within these systems. He wants the audience to be honest as to why White people had to brutalize Black people and why we’re still having to fight in the streets to prove that Black lives do matter.

“We have the ability to reshape and metamorphose society,” Boozer said. “Take every moment in life and make it extraordinary and erase the apathy that lives in our hearts.”