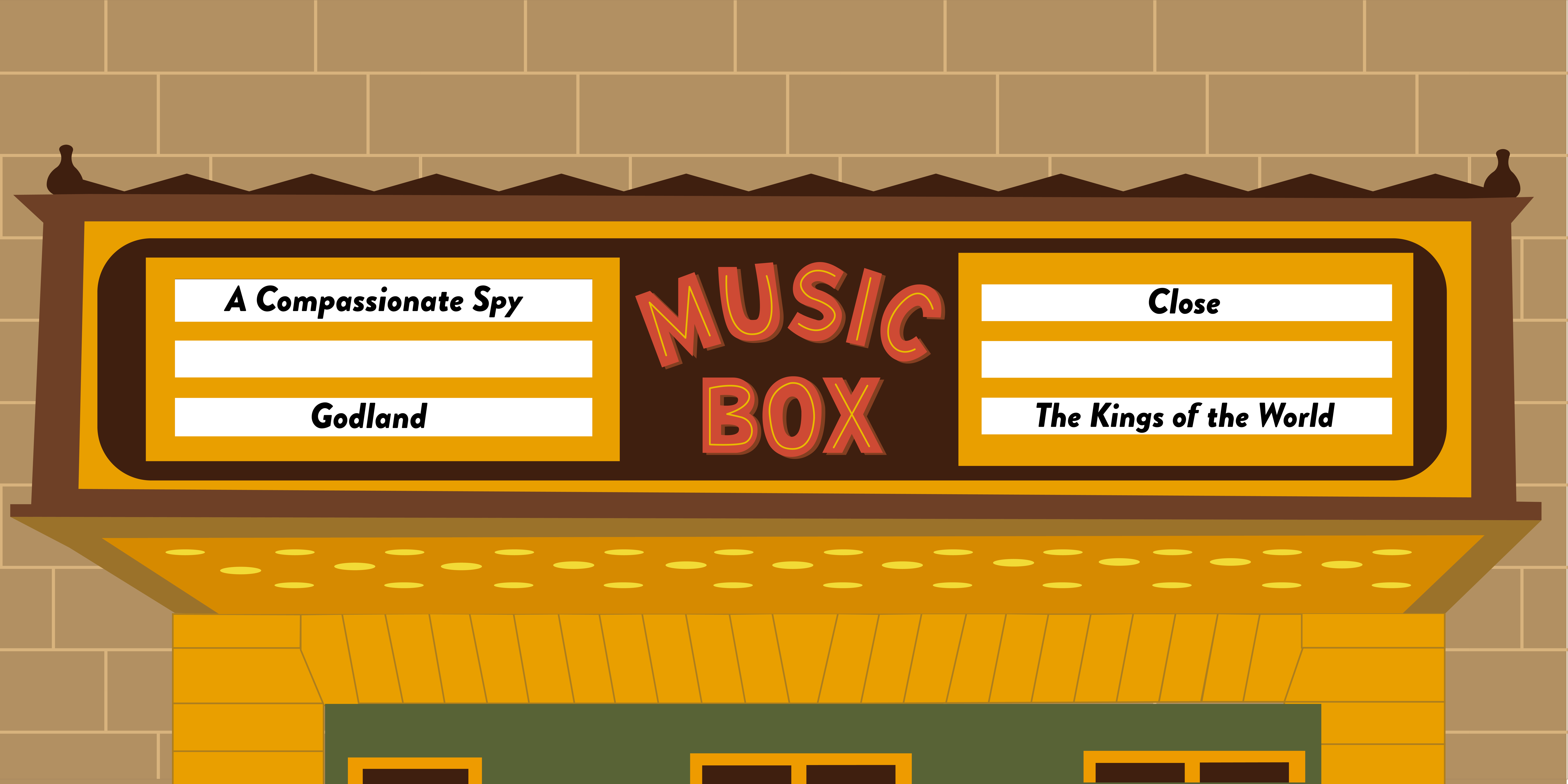 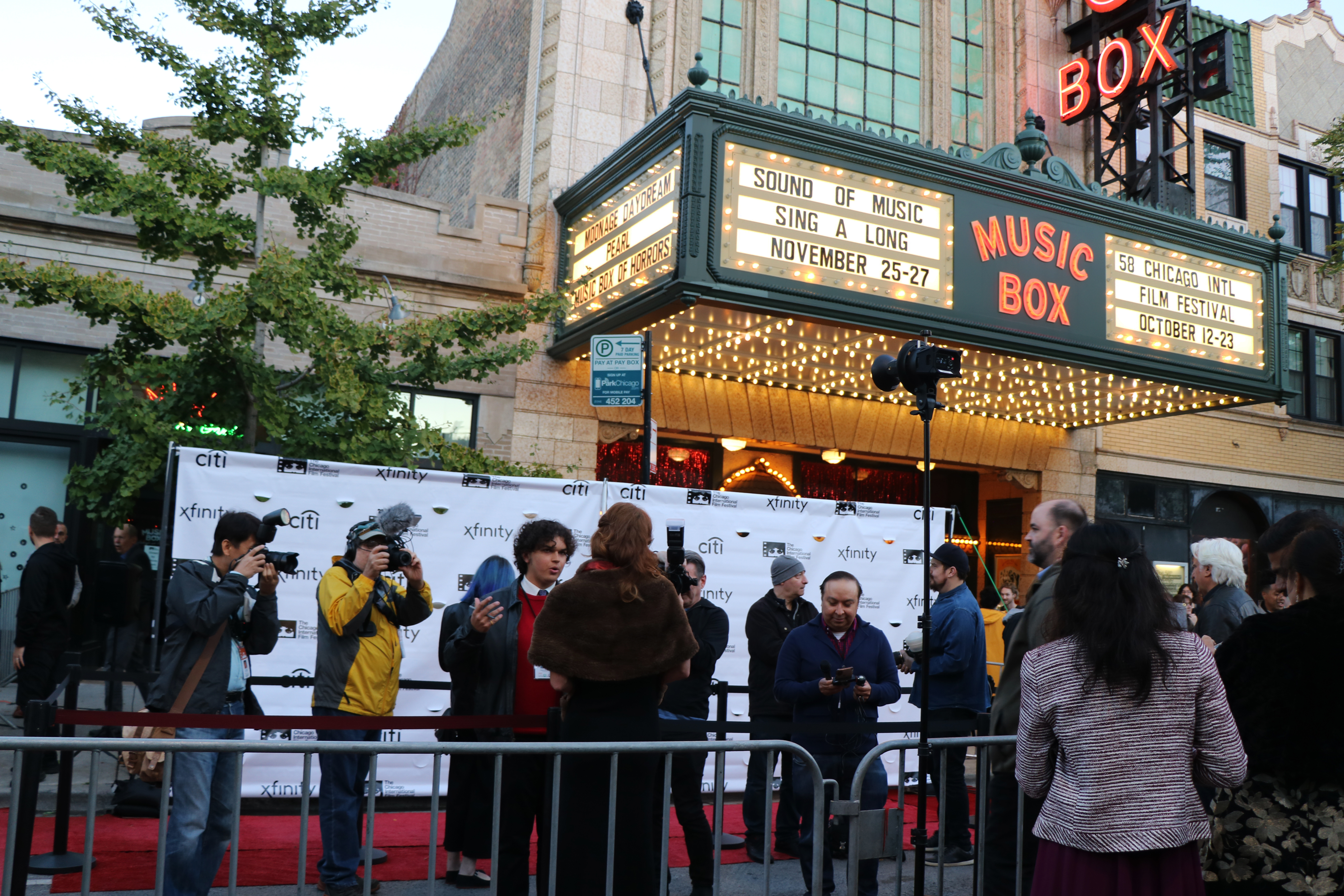 Outside the Music Box Theater, directors and stars from the upcoming films are interviewed at the Chicago International Film Festival’s red carpet event. Photo by Hailey Bosek, 14 East.

On Wednesday, October 12, The Chicago Film Festival kicked off their 58th year of the 11-day event with a block party outside of the Music Box Theater located on Southport Avenue in the Lakeview district. The free event had vendors with food, drinks, and music before the premiere of the first film, A Compassionate Spy. The vendors included many local Chicago businesses such as Dark Matter Coffee and Cafe Tola. This was the first year that filmgoers could enjoy a free block party event before settling down to see the opening night at the historic Music Box Theater. Opened in 1929, it retains its original historic architecture and design, which draws people to the venue.

“It is so special and so specific and so historical, and it’s just a beautiful space to be in. It’s so much like a classic theater. You really feel like, Oh, it’s a night at the cinema,” Dickens said. 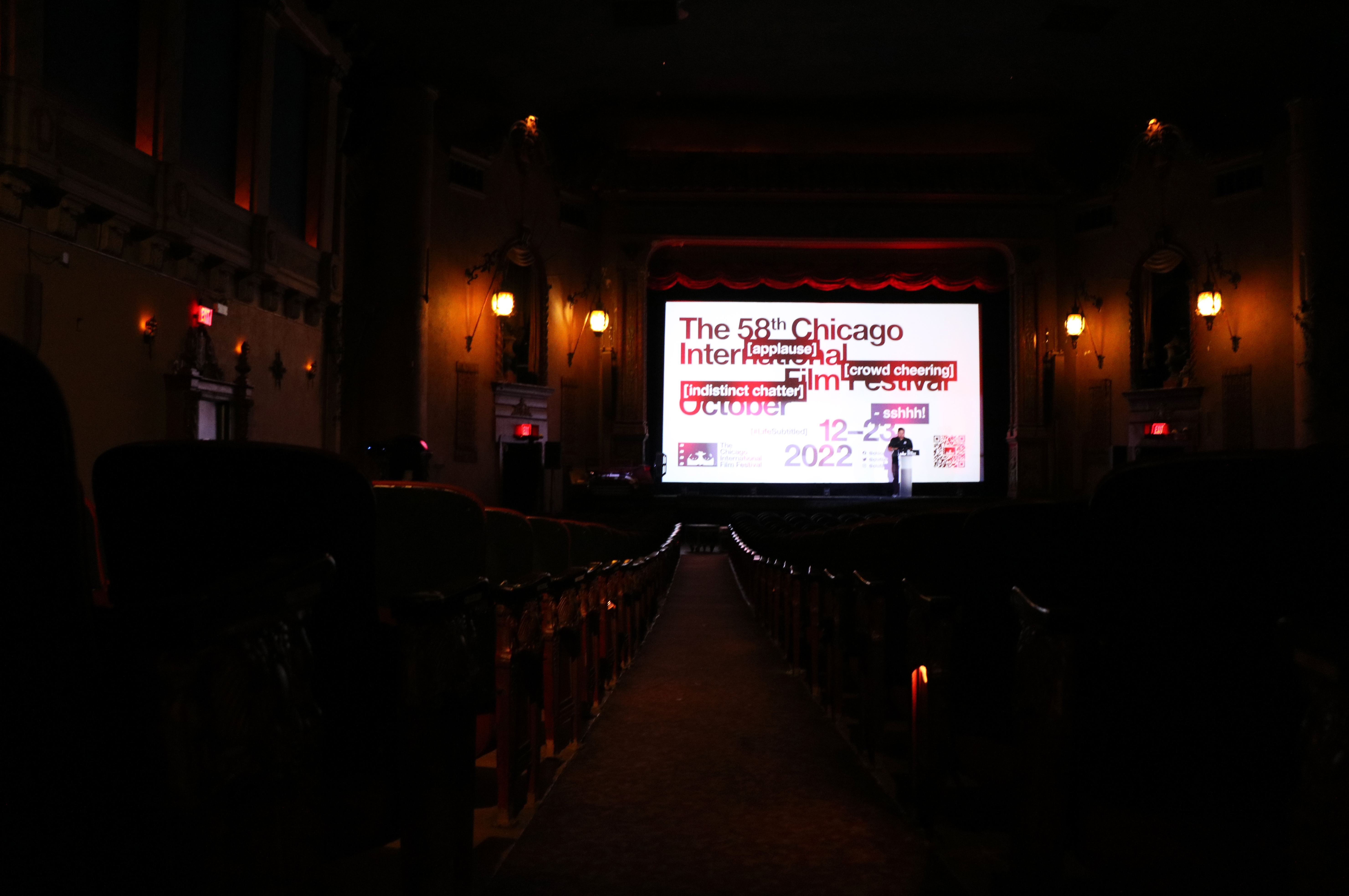 Inside the historic theater, film festival staff prepare the pre-film presentation introducing the film and any of the cast and crew that may be present for the screening. Photo by Hailey Bosek, 14 East.

The festival held screenings around the city this year, in  a variety of venues like AMC Theaters or the Chicago History Museum. Sam Flancher, a programmer with the Chicago International Film Festival, said that this gets the city connected with the festival.

“It feels like we’re bringing more of the city into the festival this year in a way that maybe it’s been absent years past,” Flancher said. “We are all about serving the people of Chicago and introducing the best international cinema to the people here.”

Their locations around Chicago are just one of the ways they try to motivate locals to get involved. Flancher explained that The Chicago International Film Festival does a lot to ensure that the films and filmmakers of Chicago are a key factor to the event by carving out a program for Chicago film and filmmakers.

“We do have a local section called our city and state section. And that’s a showcase of the best work, feature films, documentaries and short films that are made in the city over this past year. So, there is a very specific Chicago focus,” Flancher said. “We have an Industry Days program that’s, like, conferences, panels, masterclasses and discussions, and that is inviting the Chicago Film Industry and to be a part of this international scene that we’re cultivating here.”

As a programmer, Flancher, along with other experienced members, is part of the influential team that chooses the movies that will be shown in the festival.

“I think another good word for it is curator,” Flancher said. “So, essentially, we are watching the films, researching what’s out there, and then picking which films to invite for the lineup.”

The lineup this year featured over 90 films and 60 short films. The festival included different genres spanning from horror and coming of age, and of course, international. The diverse and new movies stirred a lot of excitement. 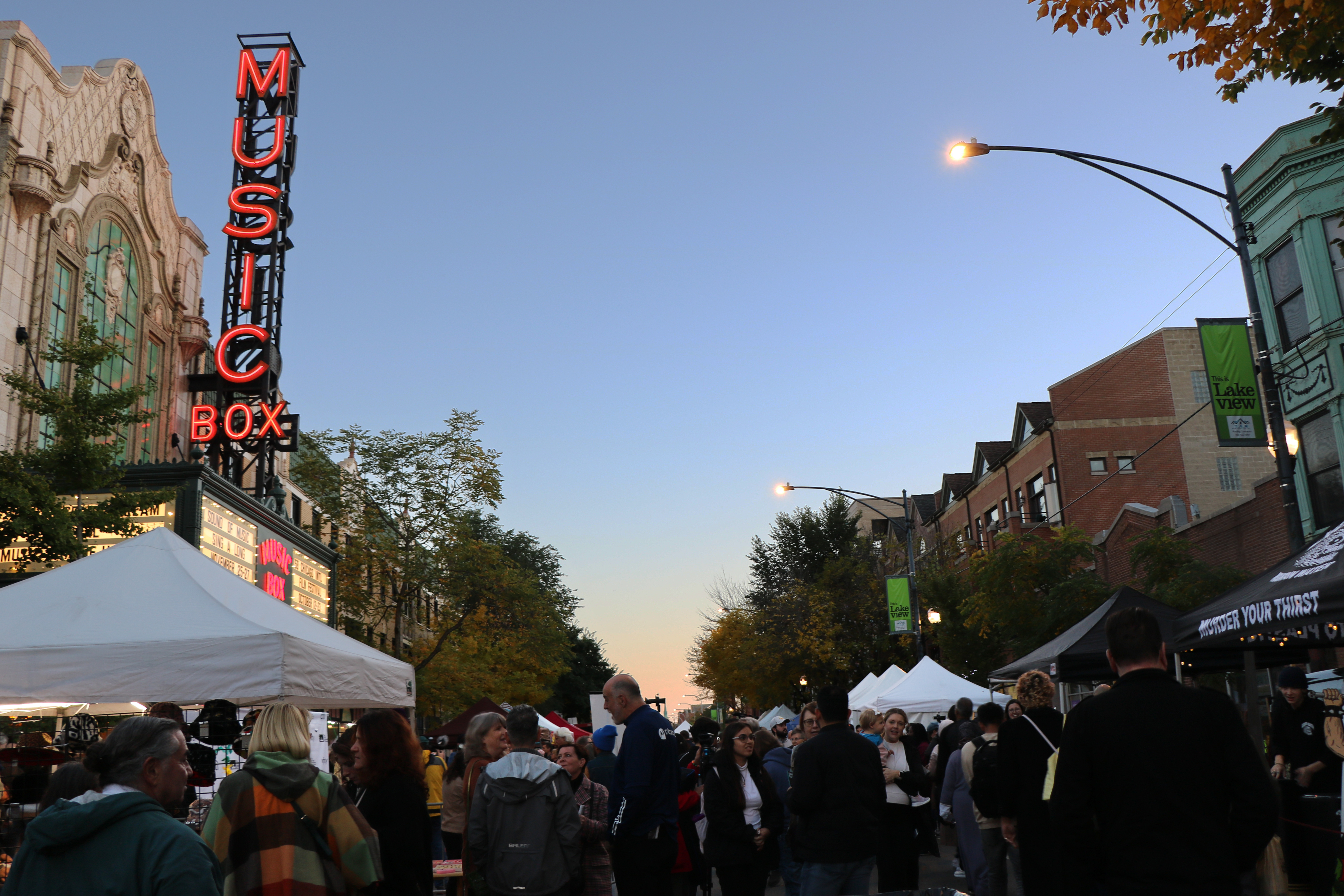 “I think overall, this year’s festival, the lineup is the best it’s been in a couple of years,” Flancher said. “I think there’s just like, there’s something for everybody in the lineup.”

While Flancher might have been the one to help pick these films out, the fans are just as excited. The effects of COVID-19 have still lingered despite films being back in person for over a year now. The thrill of the theater allows for a different type of engagement than what one can get when watching Netflix movies at home. The smell of popcorn and the sound of the projector gives way to an environment unlike any other.

Jim Mulvaney, long time fan of The Chicago International Film Festival, prefers to watch his movies on the big screen instead of at home.

“There’s a thing about seeing a film in the theater, and hearing other people react to it. It just heightens the moment of seeing a film,” Mulvaney said. “So, I have films on DVD at home. But if they’re showing it at The Music Box, I will come here and spend the $10 to see it, just to hear the reaction of the crowd.”

Mulvaney is not alone. Film fanatics alike all love the theater for the ambiance and feeling they get when sitting down with others to experience the show together.

Senior Kelly Jankowski is a film and television major at DePaul University. She volunteered for the festival this year, but was there to just see the premiere Wednesday night.

“I’m just excited for things to be back in person to, like, go to movies again, and feel the excitement of the movie theaters,” Jankowski said.

According to Flancher, the engagement is exactly what the festival is trying to do. The goal is to try to get the audiences and creators to interact with each other in a friendly and creative environment. The opportunity to discuss with filmmakers and other filmgoers fosters a unique environment that the festival is striving for.

“It’s just really audience and filmmaker friendly. I think our festival is about having audiences and directors engaged with one another in conversation after films, at masterclasses and panels and things like that,” Flancher said.

The unique environment isn’t just because of engagement, though. The festival offers the special opportunity to see films that won’t be shown again.

“There’s a lot of stuff that we’re offering the only opportunity you’re ever gonna have in this city to see it in the theater,” Flancher said. 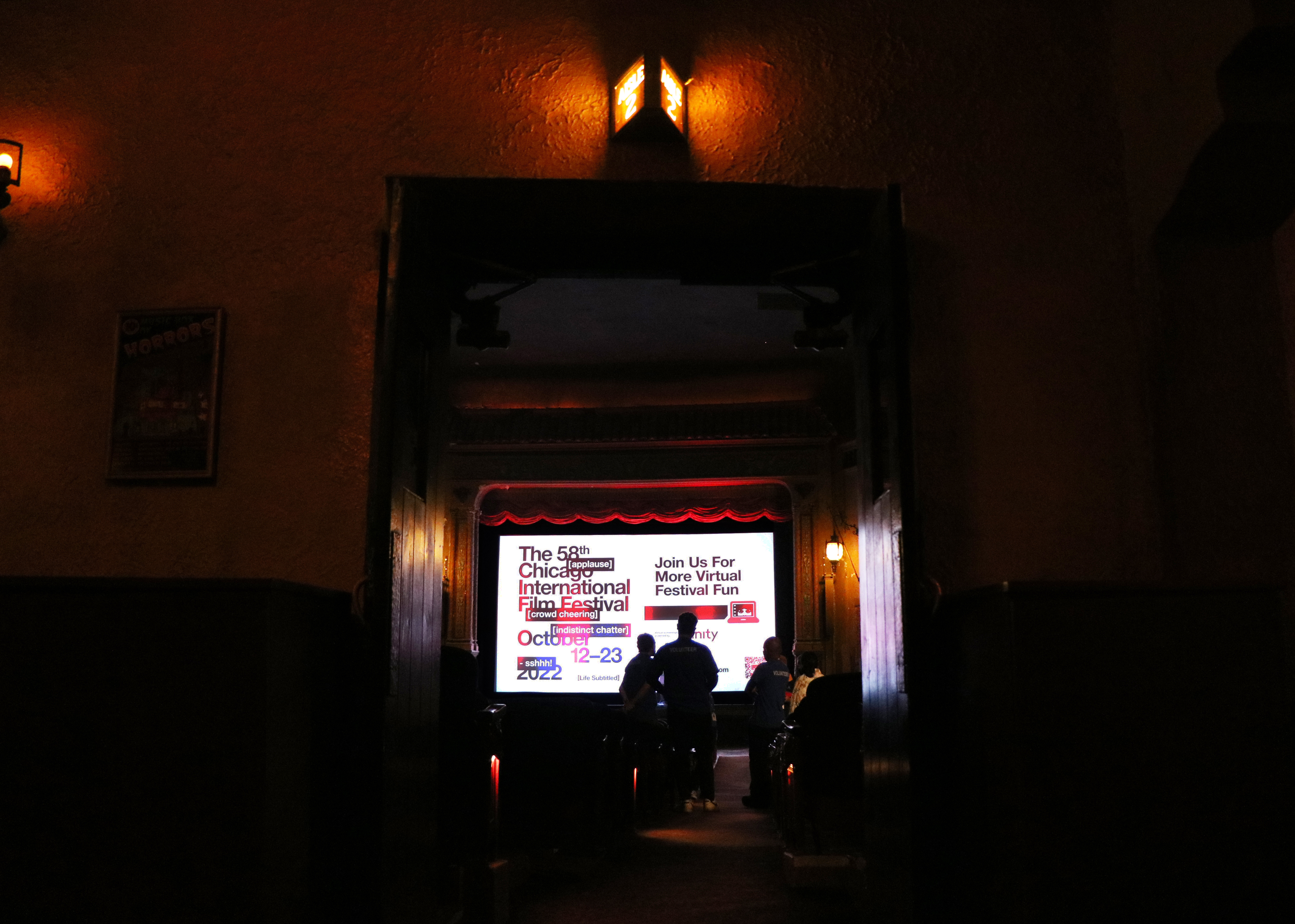 A peek inside the theater through one of the isle doors at the Music Box as volunteers prepare the room for the first screening. Photo by Hailey Bosek, 14 East.

These films won’t always stream on Netflix or be distributed to other theaters. The opportunity to see these films brings many viewers to the festival. Mulvaney said that he has seen some of his favorite films at this festival, and then never again.

“There are films that you’re only going to see once in your life, almost like a stage play, it’s only going to happen once,” Mulvaney said.

The festival has resonated with audiences for many reasons, but one thing is for sure, cinephiles are not going to want to miss this. Whether you have your degree in film or you can’t remember the last time you watched a film, the variety and amount of films shown guarantee a good time for any audience member.

“There’s rarely a bad experience you can have here. Even if you see a film that you end up not liking, you still learn something about yourself or, like, another part of the world,” Dickens said. “It’s just a big fun adventure. I love it.”