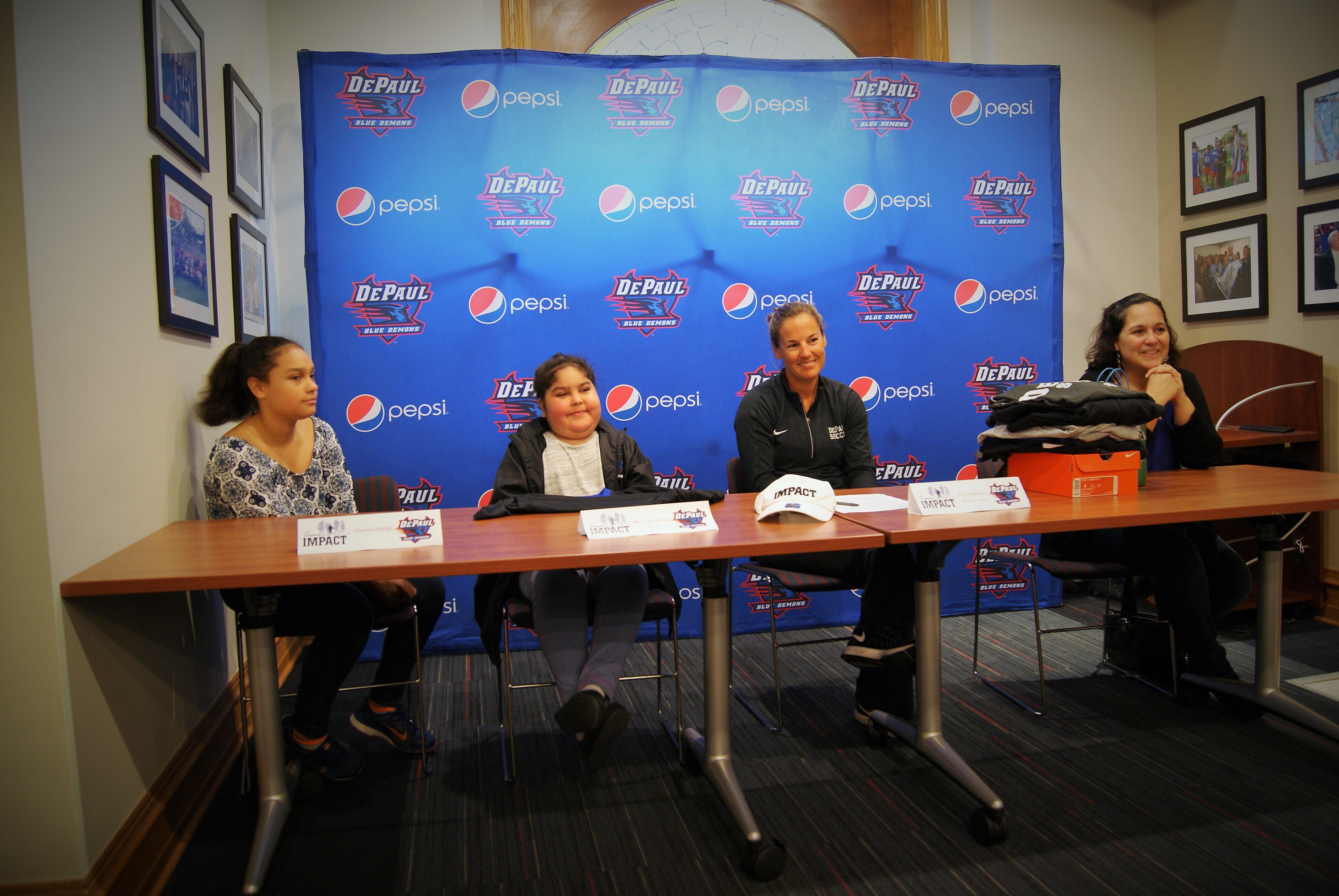 For Melinda Ortega, Saturday was Draft Day. She’d spent about eight months with the team at that point and, after much consideration, had decided to make it official with a national letter of intent.

DePaul University’s Athletic Annex is a residential-looking brownstone behind the Arts & Letters building. Inside, four name cards — Melinda’s among them — were laid across a table in what felt like a big-ish living room. Behind the table, a Blue Demon backdrop glowed against a gray morning and faced a gallery of banquet tables. The DePaul Women’s Soccer team was bouncing off the walls, synchronized in their teamwear and Gatorade squeeze bottles, fidgeting with last minute plans and adjustments. You couldn’t blame them.

A few minutes before the VIP arrived, head coach Erin Chastain (sister-in-law of Brandi Chastain, who won two World Cups and Olympic Gold medals with USA Soccer)  sat in one of the chairs at the front of the room, exchanging food jabs with some of the players (summarized in my notes as “muffins are bad”). Two of the team members were on lookout duty near the front door a few minutes after 11 o’clock and, seeing her entourage approach, realized they didn’t have a plan for when she walked in the door.

“Go crazy?” the other offered.

They settled on the latter. 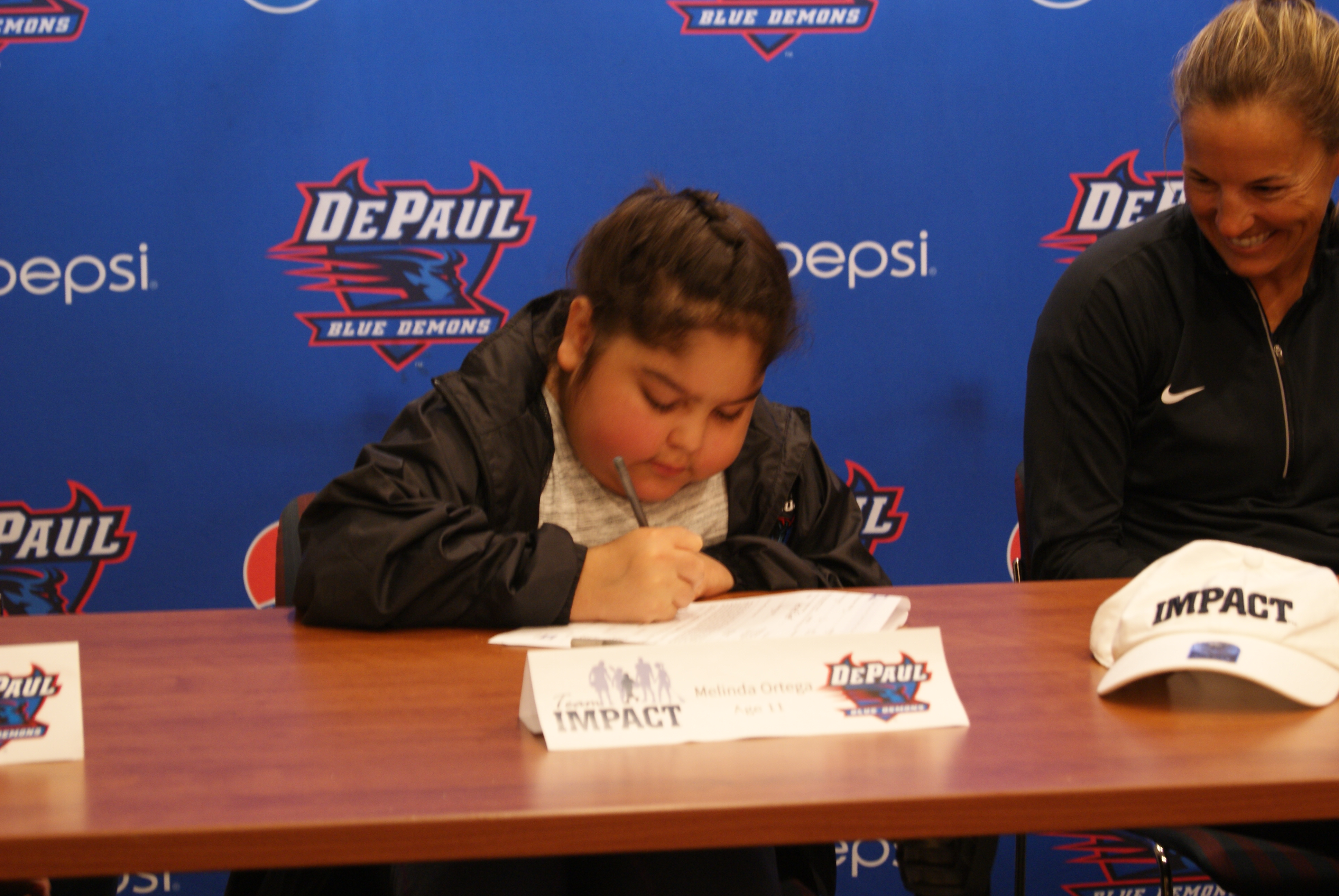 Once Melinda was behind the table with Coach Chastain, her mother and sister, she signed her name with a laser-like focus before passing the form down the line. With her commitment to DePaul’s program cemented and after a round of thundering applause, the event was opened up for questions.

Approval zipped through the room.

“If you could be any animal, what would it be?”

“A monkey, because they climb trees.”

“How does it feel to be a part of the Blue Demon family?” 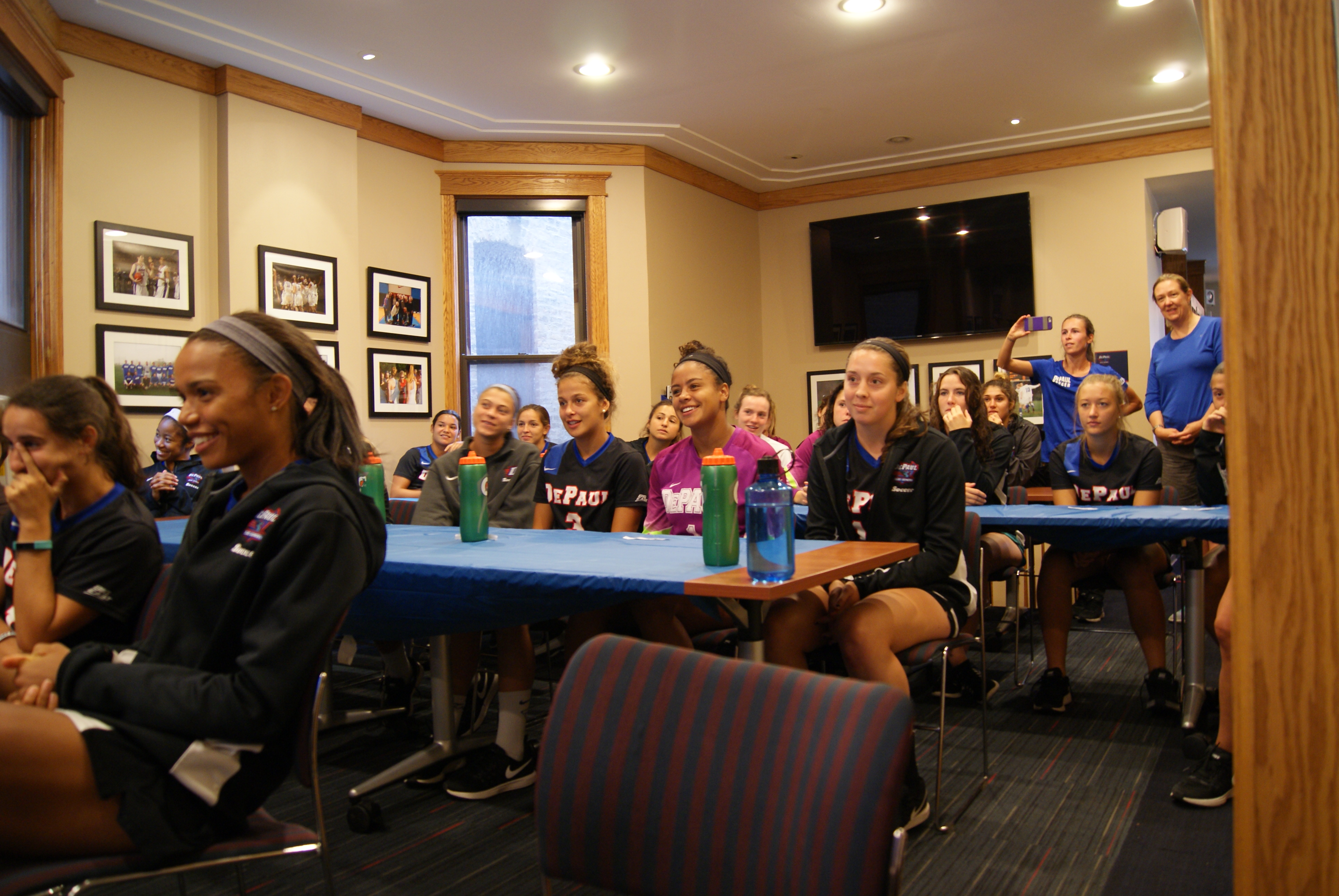 The DePaul Women’s Soccer team sits inside the Athletic Annex during a press conference for the drafting of Melinda Ortega (Brendan Pedersen, 14 East Magazine)

Mid-sentence, the room’s laughter turned into a wave of “aww,” followed by a few stifled sobs. Later, responding to another question about the team, Melinda said they were “really big” with another giggle.

“It’s just nice to have people supporting me,” she said. “Like, I had just met you guys at the beginning of the year and you’re already like family to me.”

From the front, Coach Chastain called out a few players for their now-visible tears. It’s probably worth mentioning that the girl sitting next to her, beaming in her brand new jersey, was 11.

In January, Melinda was diagnosed with juvenile dermatomyositis (JDM). It’s an autoimmune disease that, according to the American College of Rheumatology, affects three in a million children in the United States. The most common symptoms are a faint red-purple rash and prolonged muscle inflammation, the severity ranging from mild to intense weakness and exhaustion. While Melinda spent some time in a wheelchair earlier this year, she walked into the annex on her own two feet Saturday morning. A recent visit to the National Institute of Health in Bethesda, Maryland informed the family that her JDM had transitioned from severe to moderate.

Shortly after her diagnosis, Melinda met the DePaul Women’s Soccer team through Team IMPACT, an organization dedicated to improving the lives of children diagnosed with life-threatening conditions. By linking kids up with the athletic department of a local college, the hope is that they’ll benefit from a being a part of a community uniquely empowered by a competitive team setting. 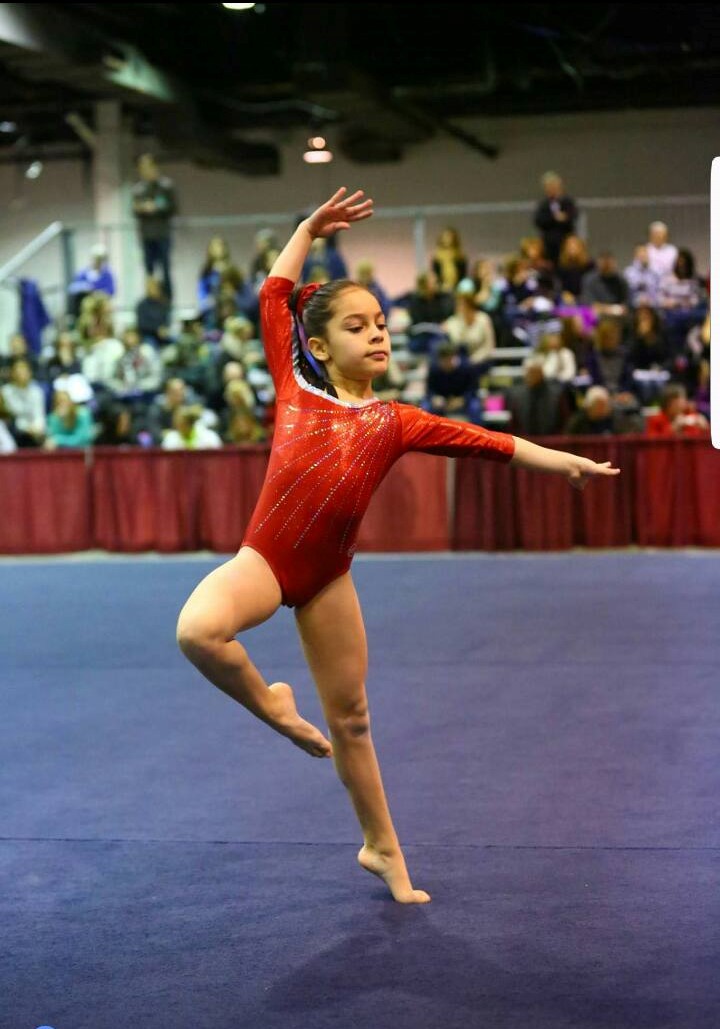 She’s no stranger to competition. Before her diagnosis, she’d been a gymnast — a junior olympic gymnast, to be clear. While splitting her time between training at the Peterson Park Gymnastics Center four to five days a week and homeschool in Jefferson Park, her 13-year-old sister Myranda remembers Melinda as being fiercely independent and driven.

“When she was little she always wanted to do everything by herself. And she saw me do things, and it’s a little ‘monkey-see-monkey-do,” Myranda said. According to her, that’s how she joined gymnastics in the first place.

“She was like, ‘I can do that!’ And then she ended up being better than me.” Myranda chose not to react when, mid-story, Melinda walked by and gave her ponytail a lazy yank.

Her parents — Sharon and Martin Ortega — hum with a sense of ineffable determination. Sharon, a local chapter officer for the nonprofit Cure JM Foundation, speaks with the precision of someone who has explained the same thing over and over again to the nurses who’ve never heard of Melinda’s condition but has yet to lose an iota of her passion for the cause. Martin is a Chicago police officer who glows when he talks about his family. After the press conference, he showed me a couple action shots of Melinda during an old floor routine from his phone. 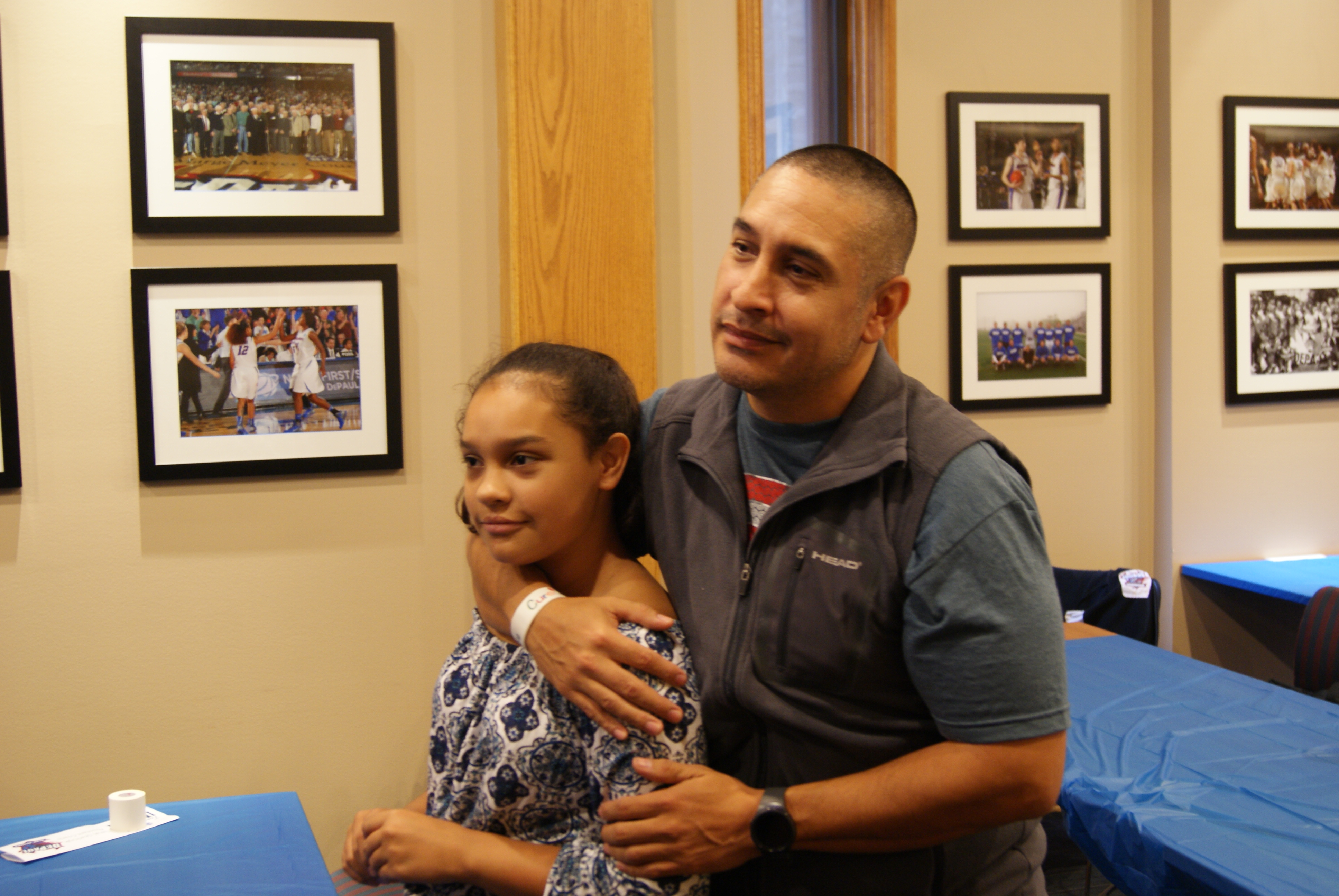 Melinda’s medical regimen is considerable. According to her parents, she takes 15 pills a day, visits Lutheran General Hospital every week for chemotherapy and every two for a more rigorous infusion, 8-10 hours a session. The cocktail takes its toll; according to her family, she’s gained 50 lbs since she started treatment.

For a couple hours on Saturday, none of that really mattered. The whole gang — Melinda, Myranda, Sharon, Martin, and their aunt Amanda Sanchez —  was happy to celebrate the time Melinda had spent with the soccer team and, more importantly, all the time still to come.

After the press conference was over and pizza boxes were cracked open at the back of the annex, I asked Sharon if there were any athletes in particular that Melinda had connected with in the past year. She searched for a second before pointing at Ana Greik across the room, a DePaul senior and center forward for the Blue Demons. She smiled.

Most of the time that the athletes have spent with Melinda has been off the field: the trip to the Regal on Webster to see My Big Fat Greek Wedding 2, an adventure to Sweet Mandy B’s, or a cupcake-baking movie night at Ana’s apartment.

A lot of the moments Ana remembers most clearly took place at the hospital during Melinda’s marathon infusion sessions. Arriving in shifts with board games and nail polish in hand, the team worked to brighten her day in whatever way they could. Even when the team couldn’t make it to Lutheran General, her parents said that Melinda would spend a lot of the time glued to her phone, chatting with the players on Facebook or through good ol’ text messaging.

“Every time she comes here she puts on a happy face, like she’s really into it,” Ana said, referring to DePaul’s campus. “[At the hospital], when we saw her — I feel like that’s when she really needed us, when she was pretty low.”

“It’s just a long day,” she said. “Being there for her, that’s what the whole thing is about: being grateful for everything that we have here, give back and help a kid who used to love competing and doing everything we do every day.” 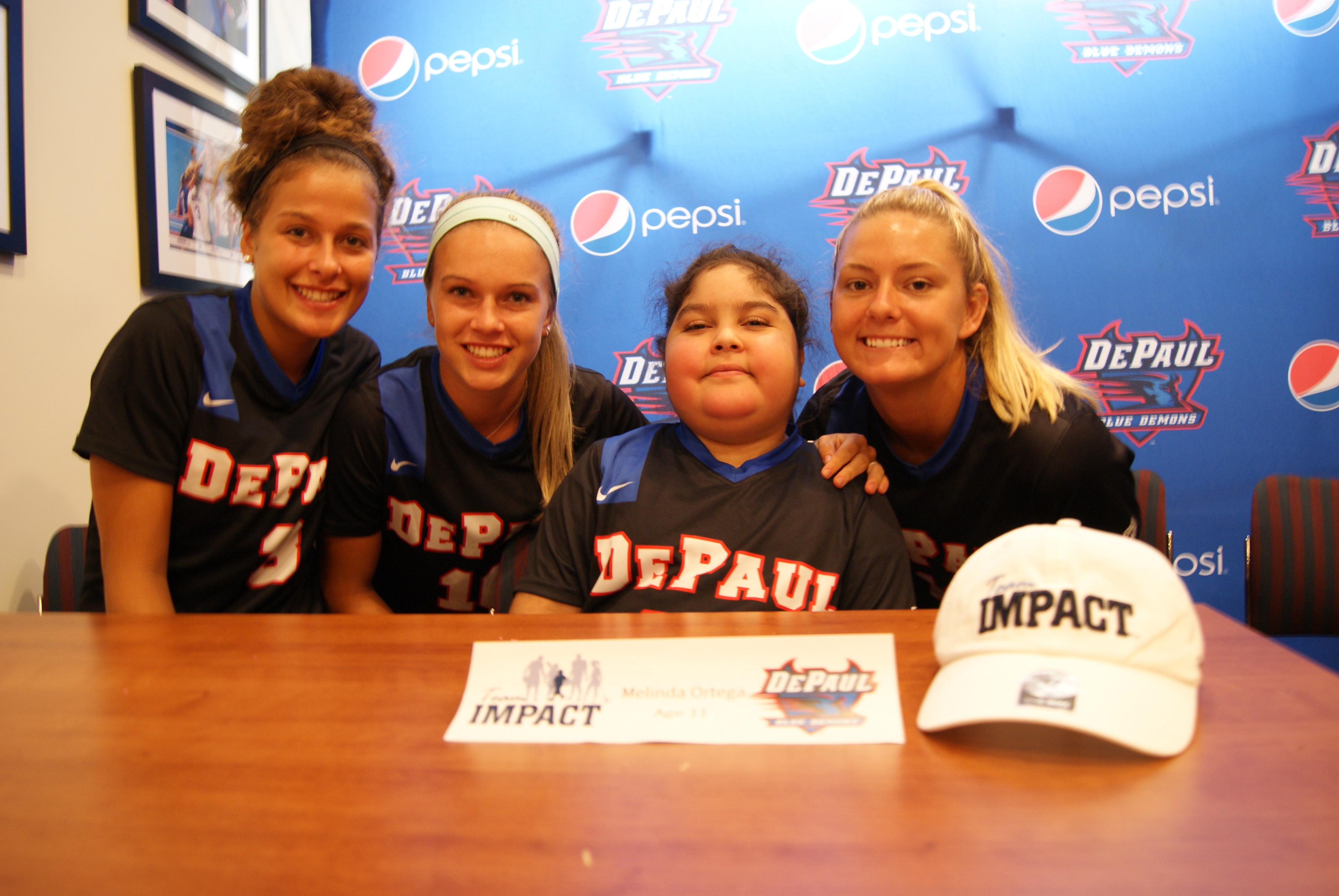 Ana is one of a handful of team leaders in charge of coordinating with Melinda, her family and Team IMPACT. She helps come up with events. She corrals the entire women’s team to rally behind Melinda in an authentic, invested way. She counts the steps that Melinda will take and the hours each activity requires, looking for a balance to keep her from becoming exhausted. Above all, she treats Melinda like she’s part of the team because she is part of the team — not an obscure diagnosis.

The event that stuck out to a lot of people that I talked to was the carnival: a surprise birthday party the team threw for Melinda last spring featuring bozo buckets, a slingshot-the-pyramid-of-solo-cups game, arts and crafts with picture frames, and a tie-a-tissue-box-to-your-waist-with-string-and-shake-out-the-ping-pong-balls-inside game.

“The girls were as goofy as Melinda,” Sharon remembers.

Melinda confirmed that when I had a chance to interview her later: they were, in her view, “really goofy.”

What Melinda appreciates most about the team is that they’ve restored a sense of what she lost when she had to leave the gym. Especially coming from homeschool, her gymnastics team had been where her sense of home began and ended.

“She’s always been athletic and is used to that team approach,” Sharon said, “and I’m not saying this is replacing her team, but this is what she’s used to.”

As the Draft Day wound down and the Ortega family was getting ready to head home, the remaining players couldn’t help but give some last minute pointers to their newest teammate.

“You have to carry the Gatorade water bottle with you everywhere you go,” one said. “That’s important.”

“You’re going to lose it four times and probably have someone else’s by the end of the year, but you need to have it,” another emphasized. Then they started to stream outside in earnest, saying they’d see her tomorrow. It was just short of goodbye.

Melinda’s eyes are fixed on the future. At school, her favorite subject is science because she “gets to blow stuff up.” She’d like to meet Simone Biles because, well, who wouldn’t? She has plans to take her rheumatologist and the DePaul Women’s team trapezing once she’s better. Once she hits remission, she might even consider picking up soccer again.

The next day, she showed up to a Sunday game at Wish Field in jersey #30: the team roster’s highest number for its youngest, newest member.

Correction: A previous version of this post stated that Melinda received treatment at the Lurie Children’s Hospital. This has since been corrected to Lutheran General Hospital.

This post has also been updated with a clarification of Sharon Ortega’s position with Cure JM as well as with a development on Melinda’s treatment; while she previously underwent 12-15 hour infusions, the sessions have been reduced to 8-10 hours to reflect her now moderate JDM.

Header image: From left to right — Myranda Ortega, Melinda Ortega, Erin Chastain, and Sharon Ortega sit behind a table in the Athletic Annex after signing a commitment for Melinda to play on the DePaul Women’s Soccer team.