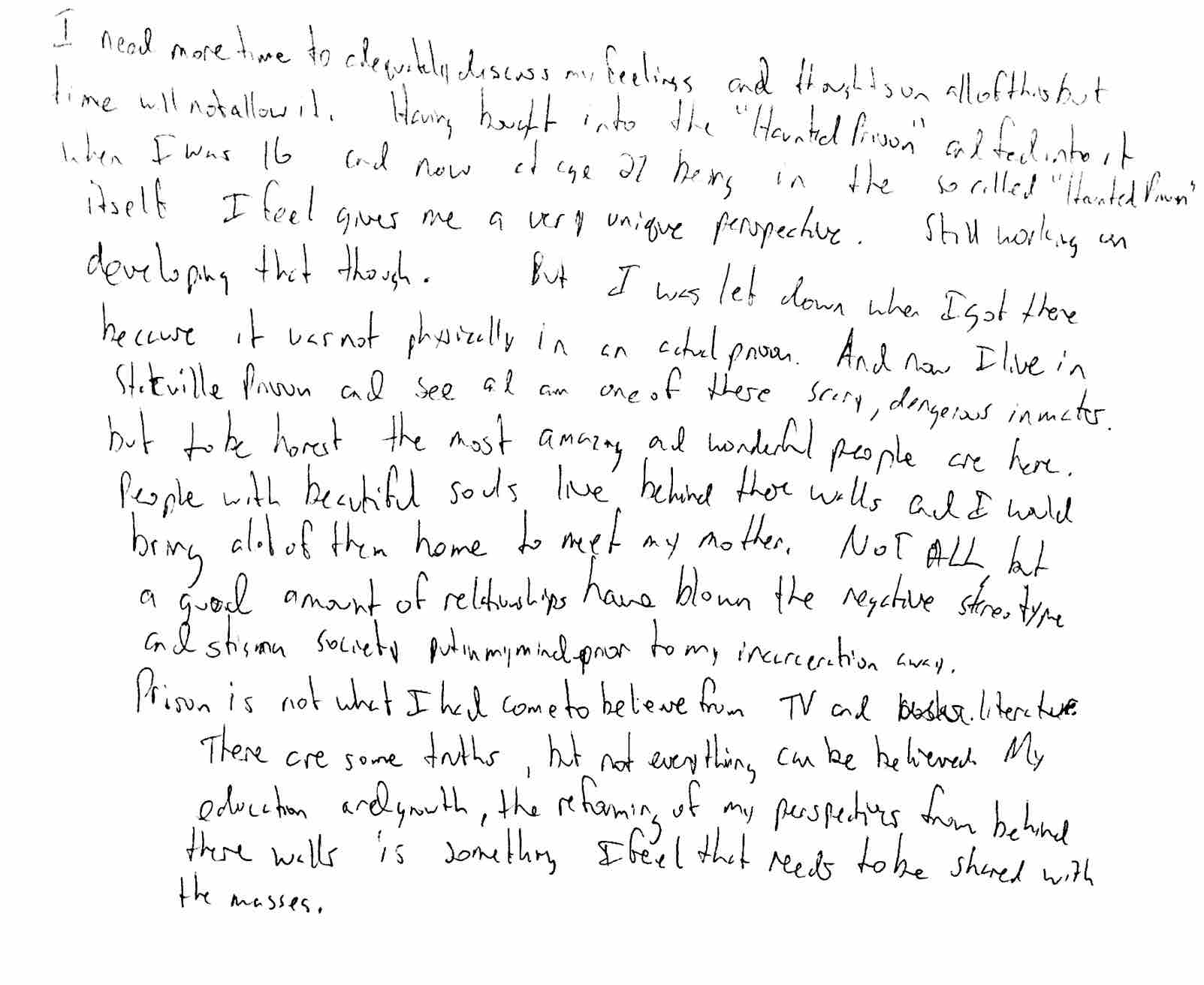 The minimum sentence for Stateville is 20 years, meaning all of the prisoners that share a classroom with Alexandria, Maria, Megan and Shamiah will spend a significant portion of their lives behind bars, if they haven’t already.

The continued existence of Stateville Prison and its uniquely dehumanizing structures of confinement seem inconsistent with our modern conceptions of justice. So too should Statesville Haunted Prison agitate our sensibilities with its archaic depictions of incarcerated Americans as innately predatory and violent creatures. If the men featured in this story had not shared their experiences here, you would never know them. Their stories would stay locked with them behind six security gates in cells where many of them will spend the rest of their lives.

This story seeks to give voice to these Americans whose experiences would otherwise be lost to narratives that thrive on their stigmatization and do little to encourage their rehabilitation. No matter its intent, ignorance can be harmful. It takes a lot more than a two-part article to change a systemic issue rooted in the economic fabric of this country. The purpose of sharing the words of the incarcerated is not to shame all the publications who have sung praises for Statesville Haunted Prison, nor is the purpose to instill crippling guilt in all the visitors who have come wanting to see its attractions. It is to illustrate a wrong that deserves to be made right, that those who have the privilege of freedom would use it to exploit those who do not.

Below are the personal accounts of prisoners involved in the Inside-Out program, transcribed from handwritten answers to a questionnaire provided to 14 East. It is our privilege and honor to share them with our readers.

“Having bought into the ‘Haunted Prison’ and fed into it when I was 16 and now at age 27 here is the so called “Haunted Prison” itself I feel gives me a very unique perspective. Still working on developing that through. But I was let down when I got there because it was not physically in an actual prison. And now I live in Stateville Prison and see I am one of these scary, dangerous inmates. But to be honest the most amazing and wonderful people are  here. People with beautiful souls live behind those walls and I would bring a lot of them home to meet my mother. Not ALL but a good amount of relationships have blown the negative stereotypes and stigmas society put in my mind prior to my incarceration away. Prison is not what I had come to believe from TV and literature. There are some truths, but not everything can be believed. My education and growth, the reforming of my perspectives from behind the walls is something I feel that needs to be shared with the masses.” – Todd

“I feel conflicted. That your attraction is a complete contradiction of our reality. You profit off the sorrows of men who were more than than the sum of their mistakes.” -Jamal

“I don’t feel very good about it. It makes me feel like I’m being made fun of, like I’m being mocked and personified as some type of scary, vicious, dangerous monster– someone to be feared by the “normal” people in society, so to speak. I would want to say to the owners, visitors and or actors of the Statesville Haunted House that it is unproductive and unhealthy to feed society’s psyche the notion that people in prison are dangerous monsters to be afraid of. It’s bad enough that our country is capitalizing off of its citizens’ misery via the massive unjust prison industrial complex (resulting in mass incarceration) and effectively dehumanizing us, warehousing us and labeling us unworthy of redemption, education, reintegration all for the sake of monetary profit, but for people in society to do the same and to promote it to others is tragic and inhumane.” -Marcos

“I think the owners should allow the kids of the prisoners in free, because if they are going to make money off our pain, they should give something back.” -Spree

“I don’t have any feelings about a haunted prison being nearby, I have a problem with the fact that instead of just having a haunted prison with ghosts etc. in a prison, you are actively demonizing real people, using real names and perpetuating the false stereotype of “criminals” and “prisoners” as being the enemy of society and to be feared.” -Joe

“Frankly, I’m not offended at all. In this capitalist country where many people have lost their jobs because of companies and corporations moving abroad to take advantage of cheap labor or tax loopholes, I think a “haunted prison” attraction was a brilliant idea. I would only ask that at the end of the experience of going through the haunted house, they have something posted like a disclaimer informing the public that the owners or actors know nothing about the people incarcerated in Stateville or their cases.” -Delgado

“It’s poor judgement. Why not use part of proceeds to invest in programs to help rehabilitate prisoners since you’re portraying inmates.” -Mike D.

“To most people it may seem like a small thing, harmless entertainment. But they don’t realize that they’re being fed some of the worse, most sensationalized stereotypes about prison and prisoners. It serves to reinforce deep rooted biases that a lot of people don’t realize they have. These are not only biases about prisoners, but about the ethnic group that comprises the majority of those who hold this title.” -Andre

“It playing on what people already thinks of us and don’t help the way society sees us. Get a chance to know us then you can do whatever you like. Get a human feel from us” -Dante

“A haunted house so close by, under the pretense of prison and capitalizing from the location only stigmatizes those in prison more as far as being monsters, scary people, etc. People in prison are more than what we are perceived to the public. I strongly feel this haunted house does not help at all but hurt how the public perceives people in prison.” -Jesse

All handwritten notes courtesy of the Inside-Out Class currently in session under the instruction of Kimberley Moe.