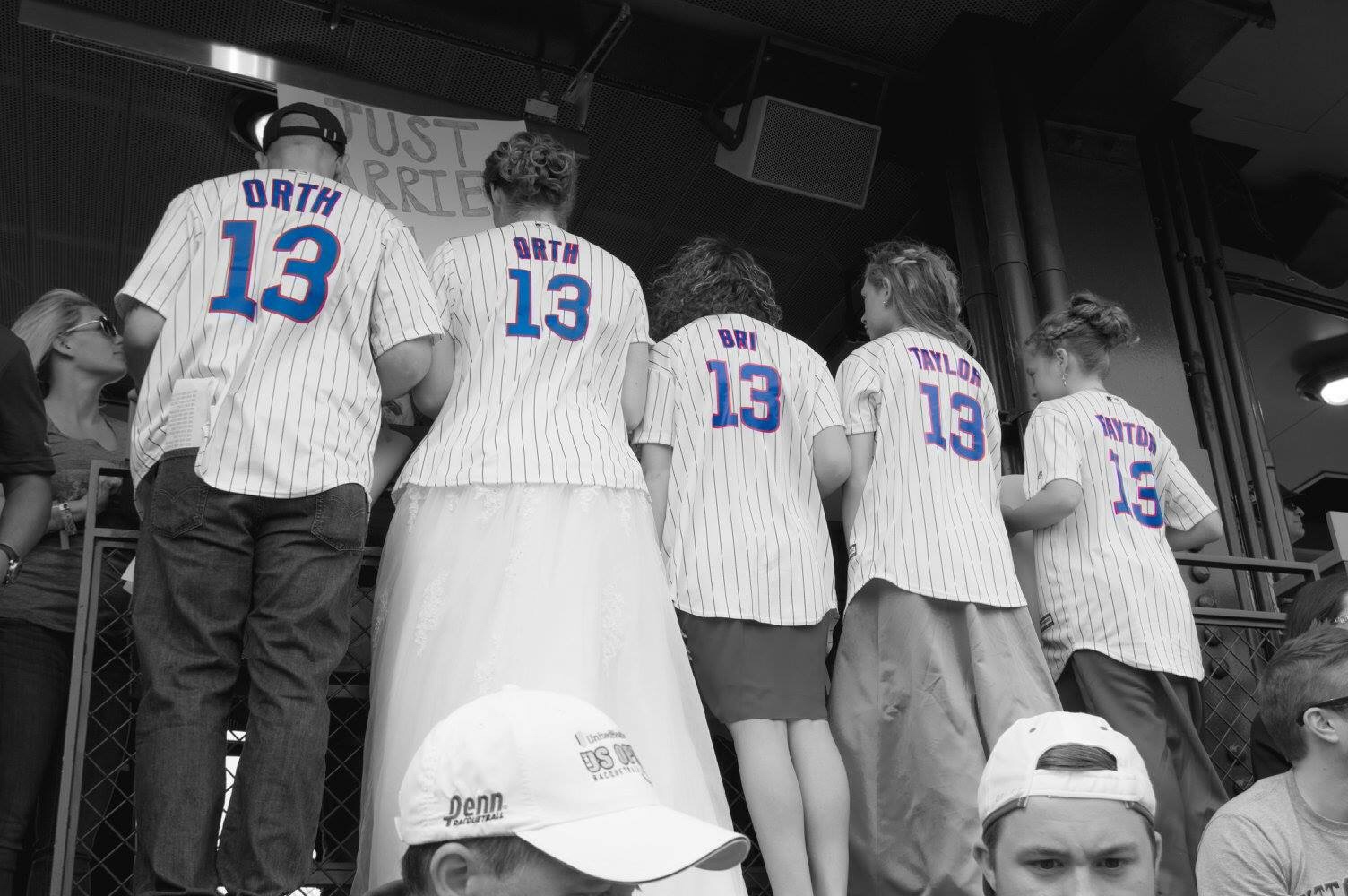 When she was 9 years old, Sophie Cervantes used to run home from school at 2:30 p.m., to catch what was left of the Chicago Cubs’ baseball game on WGN. Sitting side-by-side on the sofa with her father, Fortino Garcia, they’d bond over watching Jack Brickhouse announce the team on their old-fashioned, “bunny ear” antenna TV (from 1959).

Garcia inspired Sophie’s love of the Cubs so much so that when it came time for her to have her own daughter, Carly, and son, Augie, she enrolled them both in baseball at four years old.

“That’s probably been mine and my husband’s most momentous memories as far as (our kids’) childhoods (are) concerned,” Sophie said. “(It’s) watching them play baseball.”

The Cervantes family are now diehard Cubs fans, but they are only one household where sports has had a generational impact. This is especially true when it comes to Chicago’s Cubbies, despite the fact that before this year, they hadn’t been to a World Series since 1945, or even won one since 1908.

Michelle Orth became a Cubs fan because of her grandfather, or Poppy. When she was younger, she would go over to her Poppy’s house in the summer and listen to the Cubs’ games on WGN radio. It ended up building a stronger bond between the two of them and her Poppy continued to influence a love for the Cubs within Michelle’s family.

“It just kind of became the culture of our family where everyone rooted for the Cubs, everybody talked Cubs baseball,” she said. “It was something that when I was always (at Poppy’s house) he and I just talked about and it brought us closer together.”

Michelle would eventually get married to her husband Brian on Friday, May 16, 2016 at Wrigley Field because of her undying love for the team, a love her grandfather helped shape.

Because Michelle and Brian were season ticket holders, they decided the only place they wanted to get married was their “second home”. She couldn’t even believe they were getting the chance to tie the knot in a place that meant so much to them.

“Before we knew it, it was like ‘holy cow, we’re doing this,’” Michelle said.

This isn’t the only time Michelle has had strong ties to Wrigley Field. She and her family also spread their Poppy’s ashes at the stadium, after releasing them from a Cubs themed urn. She says no other place was fit because the stadium was “a part of our family.”

When her Poppy died, Michelle got closer with her uncle because of their shared love of the Cubs. She now passes that same love onto two of her three daughters. Her 14-year-old daughter Taylor and 12-year-old daughter Payton have gone to many Cubs games with their parents this past summer.

Michelle says this love of the Cubs naturally occurred and has a way of connecting so many people.

Adam Chalifoux says part of the reason sports can connect people like this is because of the way they create general conversation.

“I have so many of my friendships built off sports because it’s something so easy to talk to people about,” he said. “When we’re all rooting for the same teams, it brings people together.”

Despite this, Chalifoux actually comes from a family where his mother is a Cubs fan and his father is a White Sox fan. Although his dad is his biggest sports influence, Chalifoux switched back and forth between the teams over the years and is now a Cubs fan.

“Well eventually I had to make my own decisions, you know? My dad’s a big influence but I’m my own man,” he said.

For Jennifer Nazha’s family, a rivalry has never existed. They have always had a diehard love for the Cubbies. All of Nazha’s grandparents are from Jordan and her parents came to the United States when they were teenagers.

They watched the Cubs frequently and so when Nazha was born, she had no choice but to be a fan of the red and blue. Her parents put her into a Cubs onesie at 2-months-old and there was simply no going back.

Nazha and her family have been so influenced by the Cubs that sports are like home for them.

“Sports are a part of the home and home is where the heart is,” Nazha said. “When you grow up and you have that bond through sports like my family has through the Cubs and baseball, I mean it almost is like a tradition, your family’s culture or something…sports have a powerful impact on people.”

Sports have such an influence on people and their families that the Cubs are already affecting Nazha’s one-year-old nephew Joey. His very first, clear words were “Go Cubs Go” and he continues to say the phrase every time he sees a Cubs logo.

Nazha says she could see the happiness that Joey’s father, her brother, was filled with in that moment because his son was also a Cubs fan. Someday she hopes to instill the same love of the Cubs Joey has in the team, into her own children and grandkids. She’s even held onto souvenirs to give them a piece of history.

“I’ve kept every newspaper, every ticket and I’m going to give it all to my grandchildren one day,” Nazha said. “We’re going to keep this flow of Cubs fans going in my family.”

Part of this history Nazha will tell her kids and grandkids includes her experience attending Game 6 of the National League Championship Series (NLCS), when the Cubs beat the Los Angeles Dodgers 5-0 and clinched their spot in the World Series. She says she has never felt more nostalgic than in that moment.

“When they won, I was in shock,” Nazha said. “I mean it was just such a nostalgic feeling being there with my family who I’ve been going (to games) with forever. I got to celebrate my favorite team at my favorite place with my favorite people, and it was just a feeling that was indescribable.”

She was overcome with joy and couldn’t help but break down.

Nazha experienced a moment only a select few will be able to say they saw in-person. But for Chicago Cubs fans all over the city and the country, it doesn’t matter that they may have seen it on a television screen or heard it on the radio instead.

In fact, Sophie says her father is up in heaven still watching.

“I know he’s smiling down,” she said.

Michelle also says her grandfather is here, being a part of this moment. She wears one of his old Cubs shirts to every game so he can be there in spirit.

As for the generation that has the privilege of seeing something as iconic as the Cubs going all the way this year, Chalifoux has something to say. 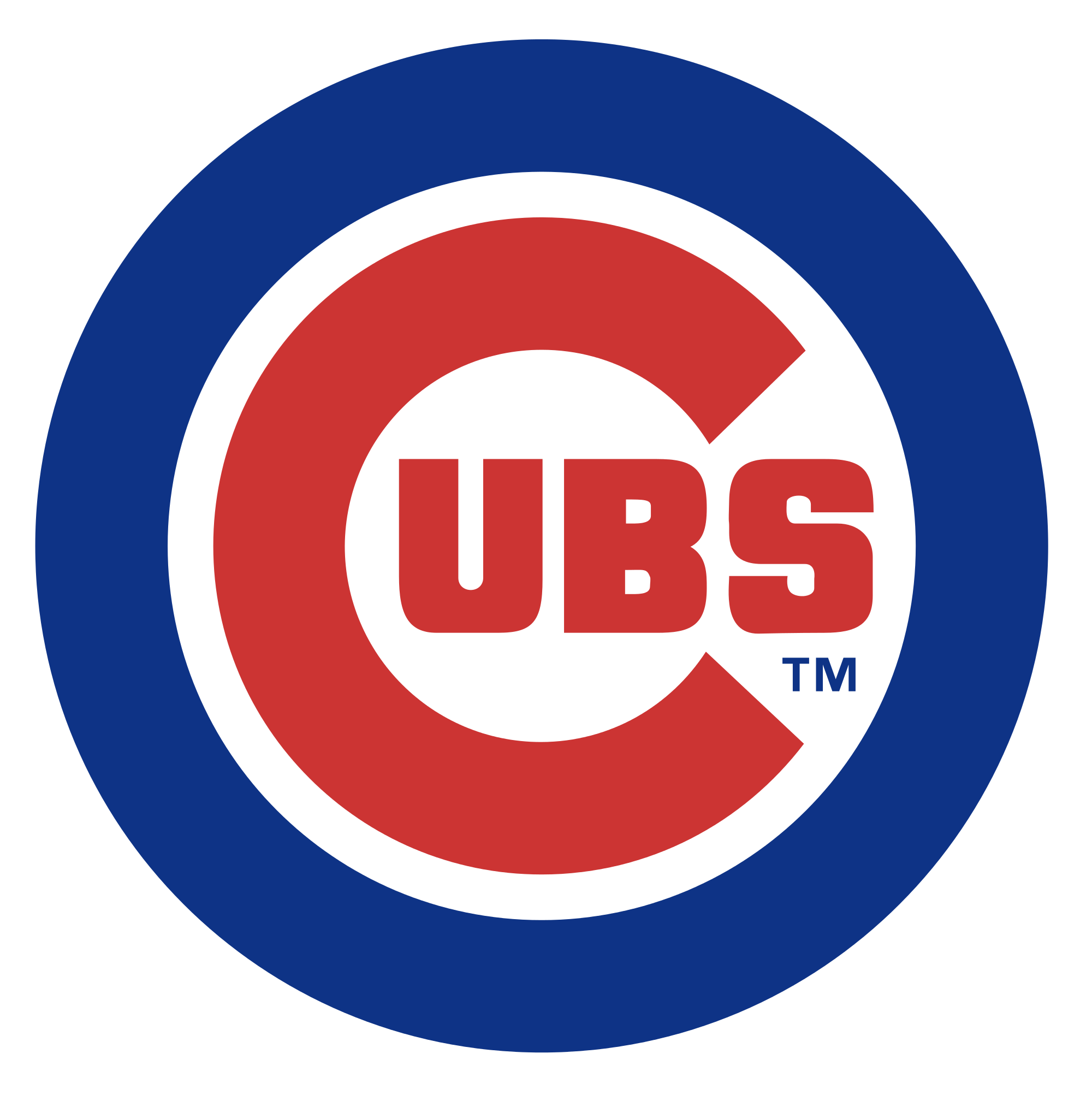 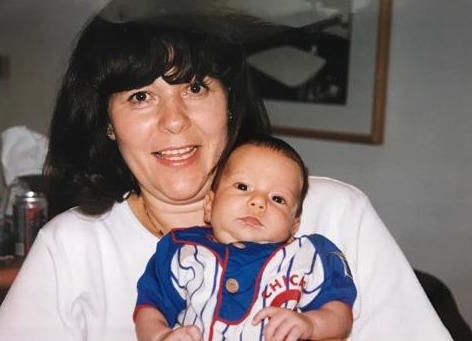 Jennifer Nazha’s mom dresses her up in a Cubs onesie.

Baby in the Ballpark 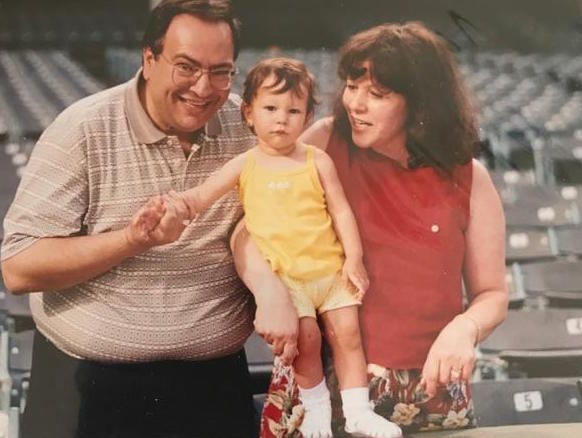 Jennifer Nazha and her parents at Wrigley Field. 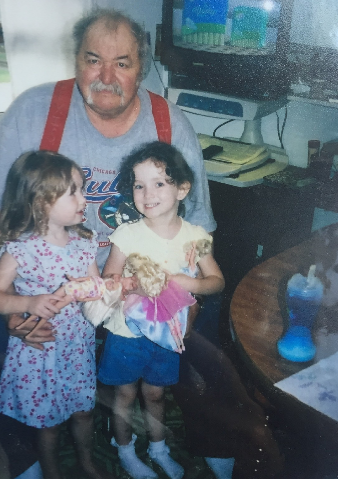 Michelle Orth’s Poppy poses with his her daughter Taylor and Orth’s cousin. 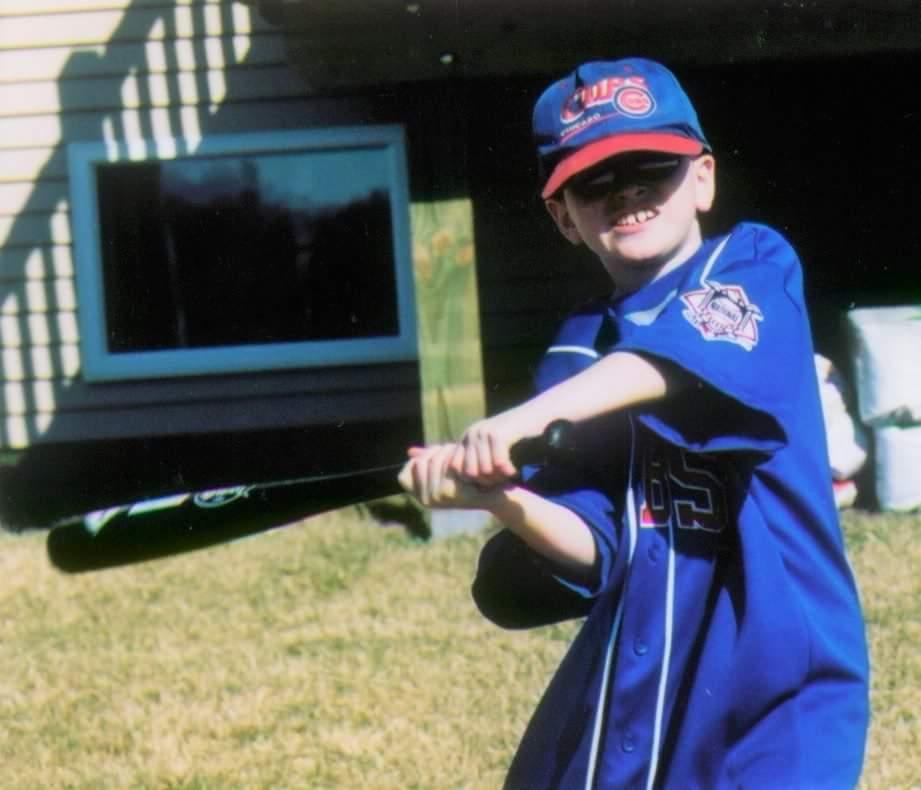 Adam Chalifoux when he used to switch back and forth between teams he liked. 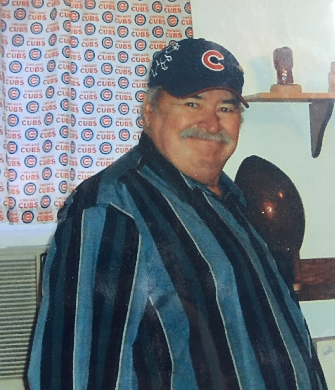 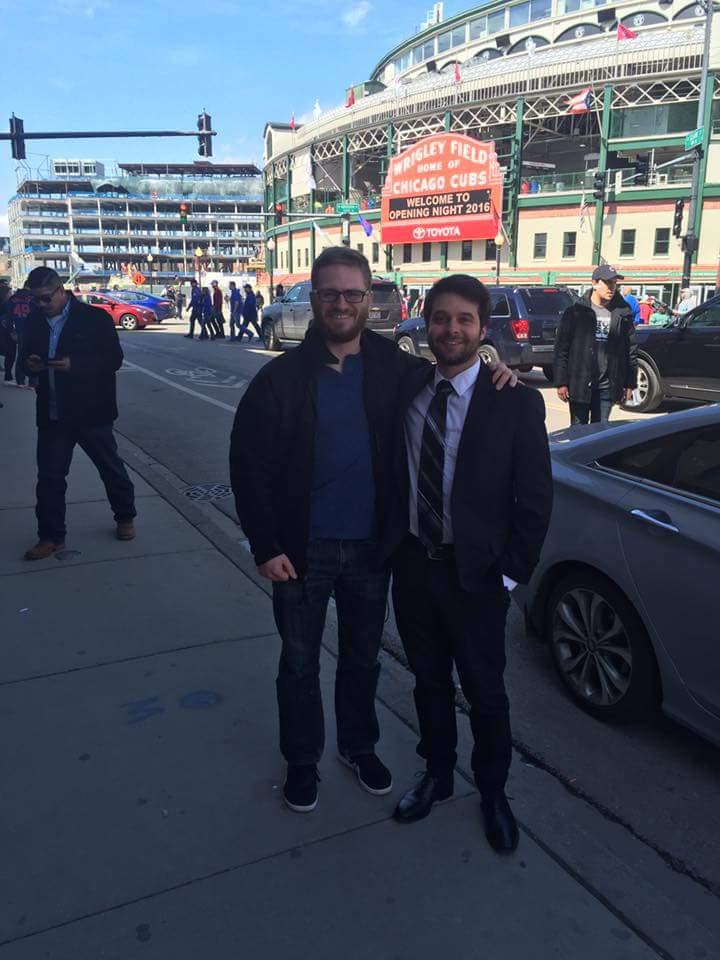 Adam Chalifoux poses with his cousin outside Wrigley Field on the night of the Cubs’ 2016 season home opener game. 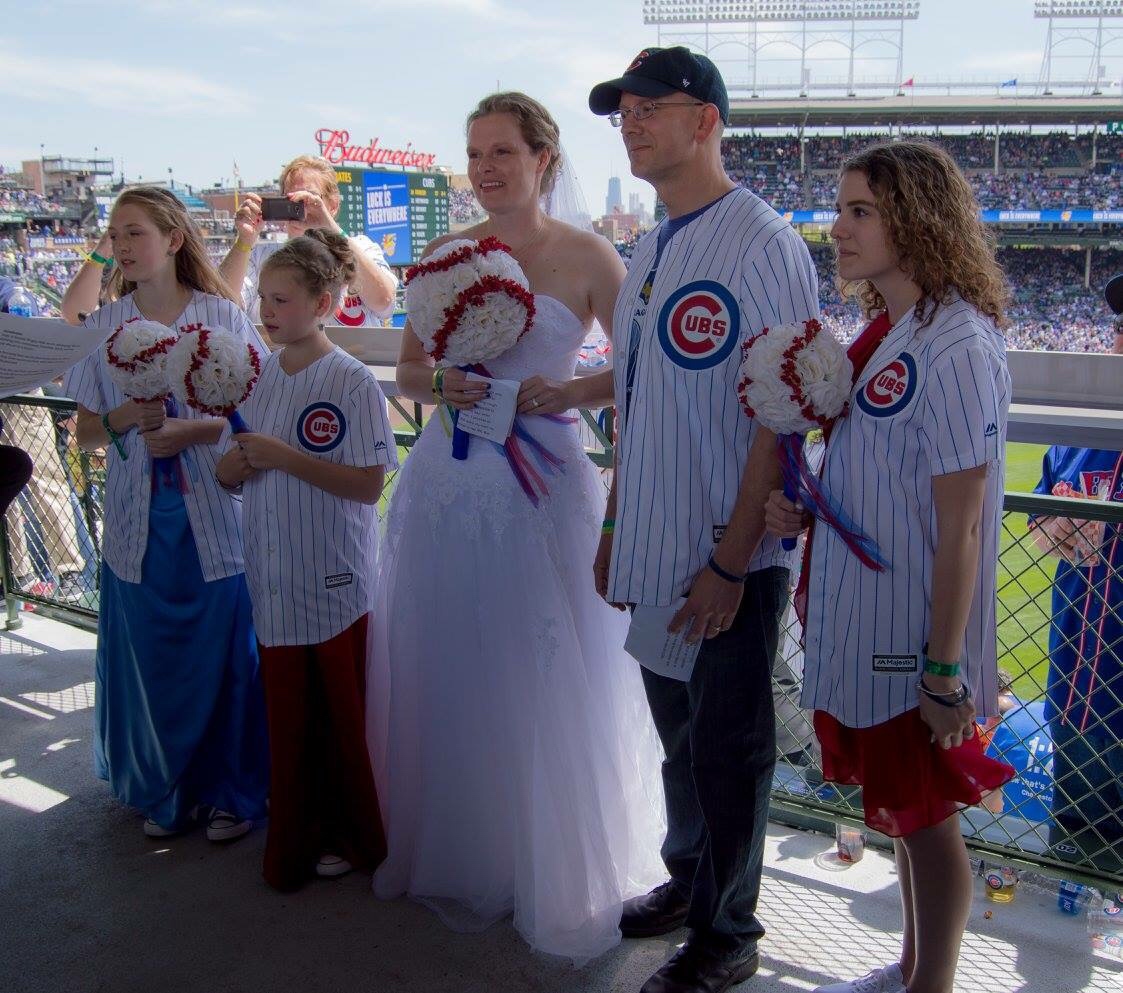 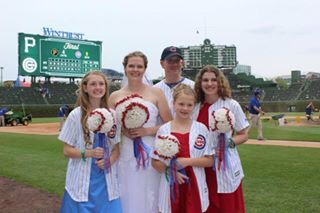 The Orth family took pictures at Wrigley Field shortly after the ceremony there. 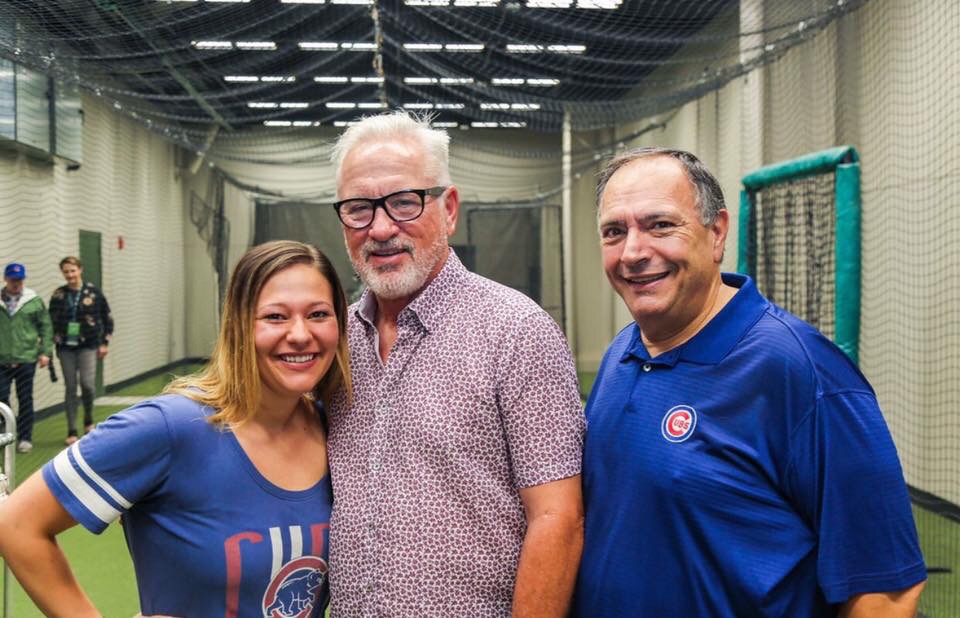 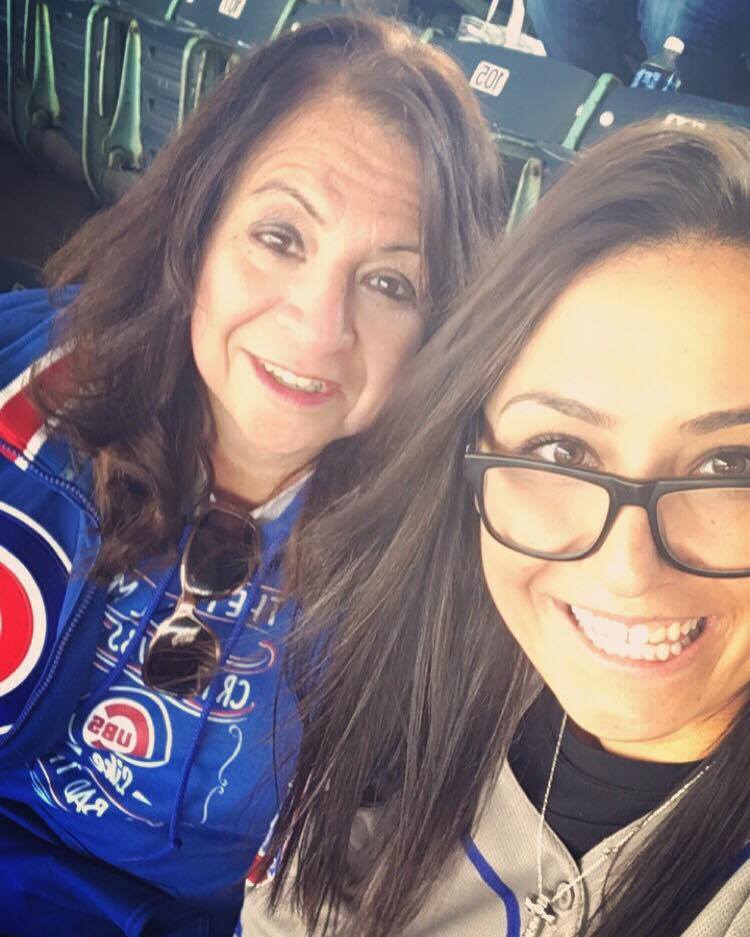 Sophie Cervantes and her daughter Carly at a Cubs game. 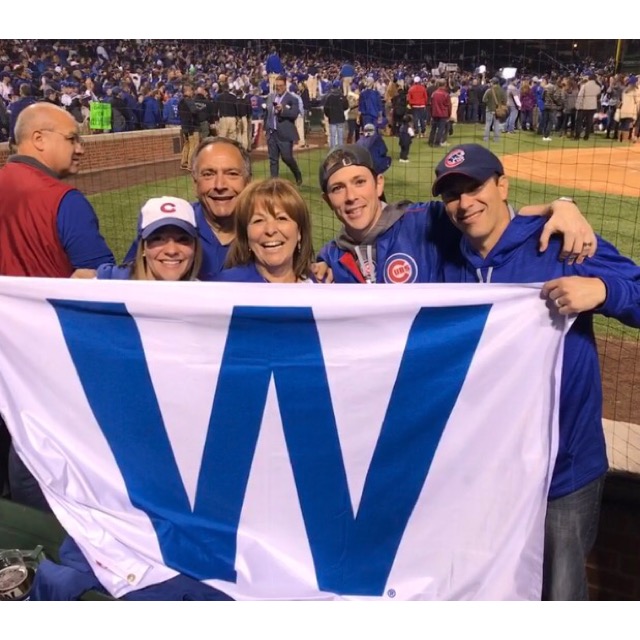 Jennifer Nazha and her entire family at Game 6 of the National League Championship Series when the Cubs clinched a spot in the 2016 World Series. 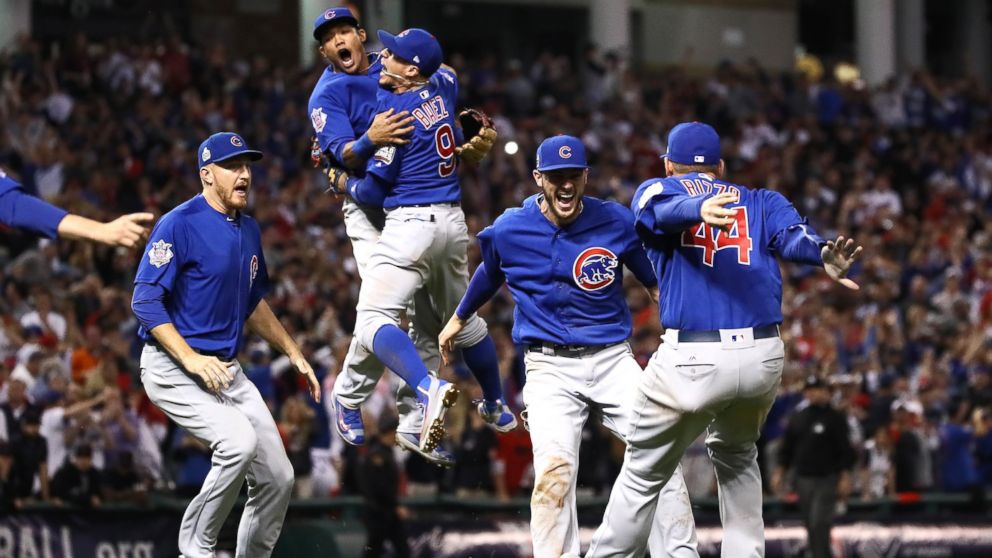 In an exciting Game 7 of a nail-biter series, the Cubs brought home the World Series Champions title for the first time in over 100 years.