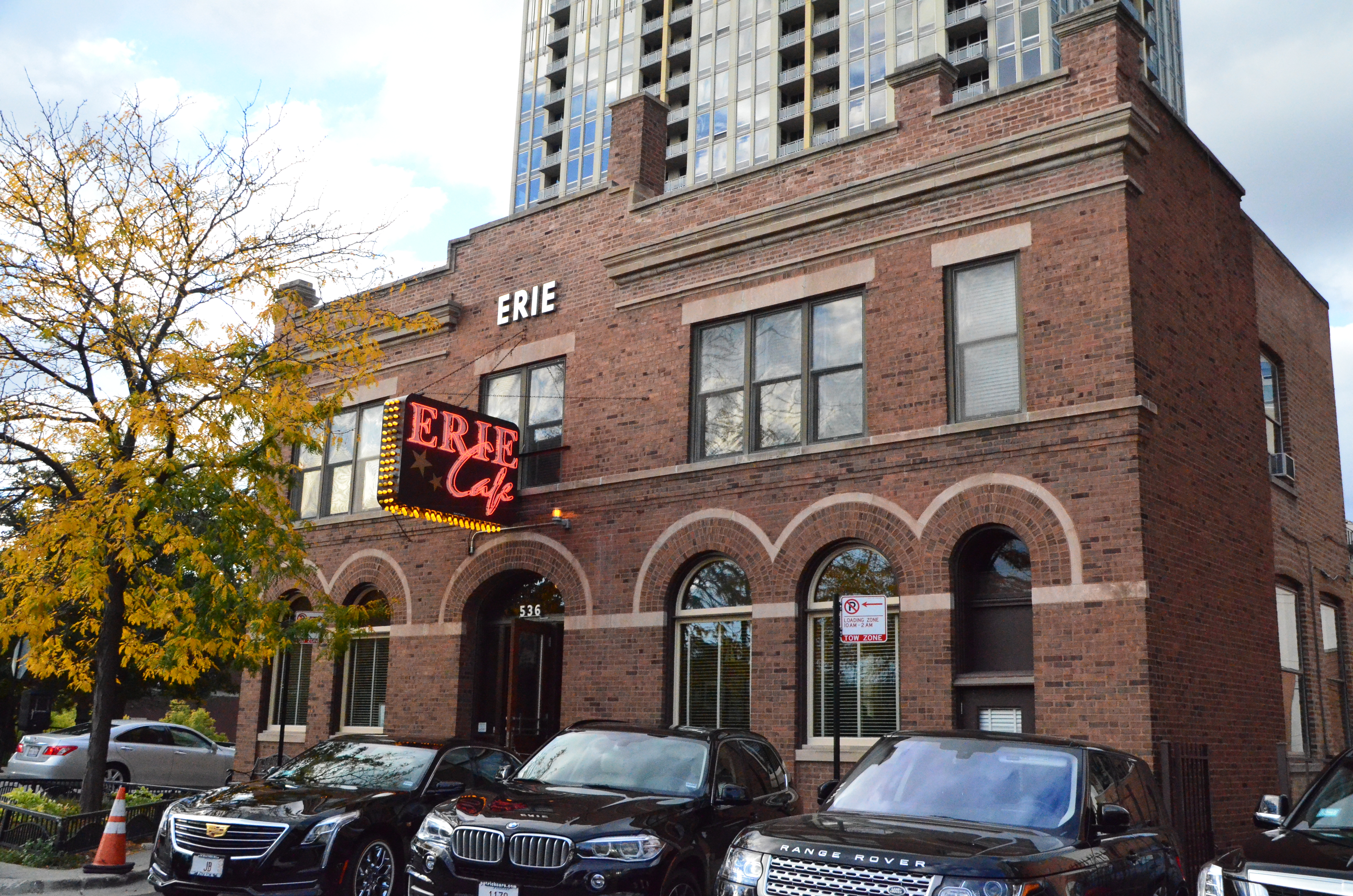 A look into Chicago’s most political steakhouse.

Serving up juicy slabs of steak and perilously full martinis since 1944, Erie Cafe sits on a quiet corner in Chicago’s River North district. The restaurant boasts a 4.4-star review on Zagat Chicago, with median entree prices in the mid-thirty dollar range.

Erie’s offerings don’t veer far from every other Chicago steakhouse. What makes it unique is the $42,272 spent there in 2016 alone by the Illinois campaign committees of various aldermen, congressmen, and members of the Cook County Circuit Court.

Cook County Assessor Joe Berrios has accumulated 360 receipts at Erie Cafe since 2007, totalling $67,520. That’s according to Illinois Sunshine — a campaign spending watchdog and part of the Illinois Campaign for Political Reform. The organization tracks the funding and expenditures of Illinois political committees. 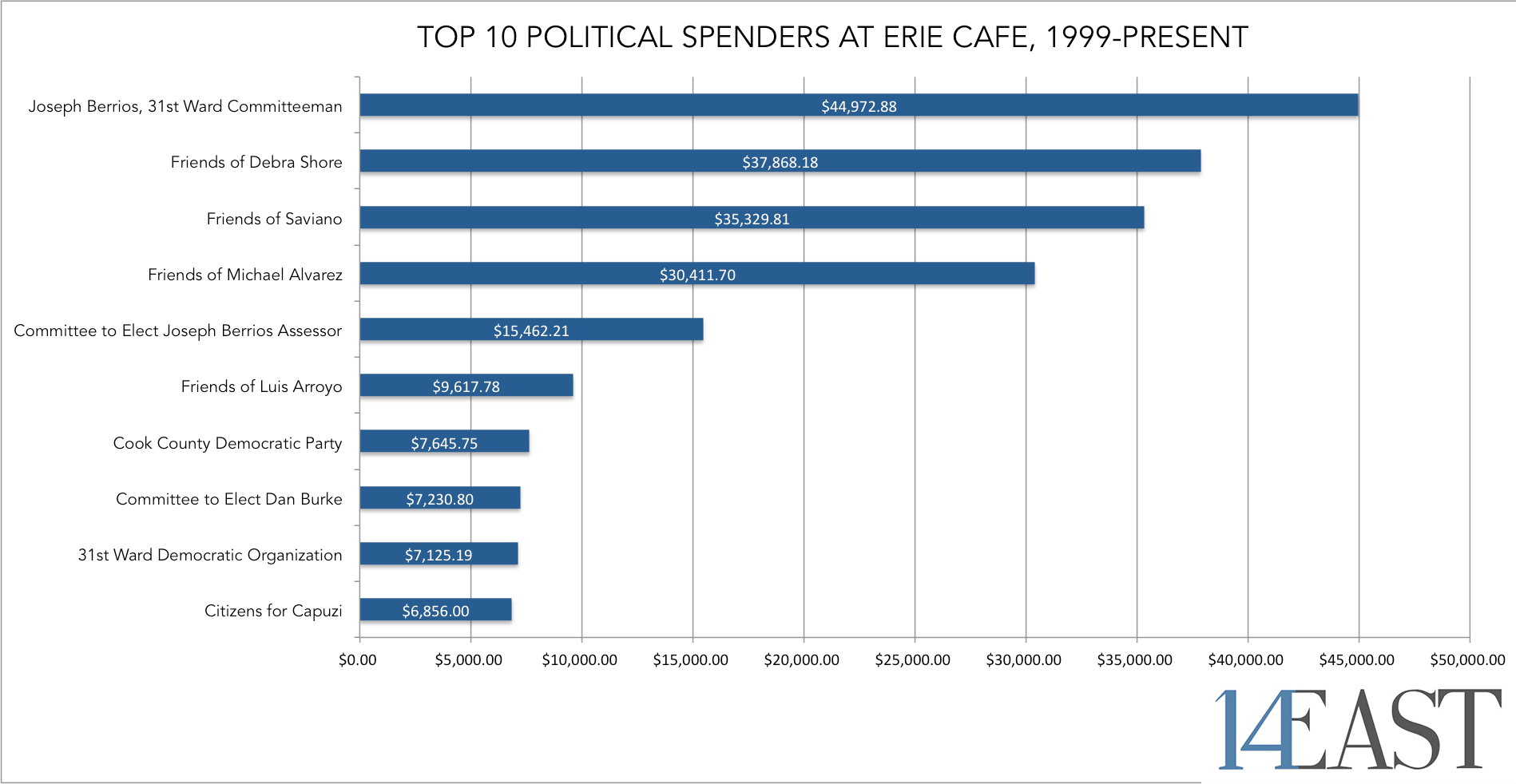 The total amount spent at Erie by politicians in 2016 grossly outweighs those accumulated by other steakhouses of similar ratings, cost, and location.

Chicago Cut Steakhouse received about $7,441 during 2016 from various committees like Citizens for Luis Arroyo Jr., Citizens for Alderman Reilly, and Elect Dan McConchie. Smith & Wollensky’s, also located off the Chicago River, had no expenditures listed under 2016. Morton’s Steakhouse had two expenditures under 2016 from the same committee — Sylvestri for Cook County Commissioner — for a total of $8,202. RPM Steak had one expenditure in 2016: $2,007 from Chicagoland Chamber of Commerce PAC. Gibson’s expenditures in 2016 amount to $15,230.

There are over 80 pages of expense reports listed under Erie Cafe, spanning back to 1999, with some single receipts surpassing $4,000.

The long list does not come as a surprise, considering Erie’s proximity to City Hall and view of the Chicago skyline. Politicians contacted for this story cited the restaurant’s free valet parking, city view, back outdoor patio and, yes, good steak, as reasons for their frequent visits.

“We happen to know the manager is Latino and most of the waiters are Latinos, and they give us a good price and the food is good, and it’s on the outskirts of downtown,” said Arroyo. “I’m probably in and out four or five times a year.”

A manager at Erie Cafe initially declined to comment on why so many politicians prefer Erie. She added that she doesn’t answer questions about her clientele, and it’s that sort of discretion that makes politicians feel comfortable there.

Since 2010, Erie Cafe has failed three food inspections and is currently listed as Risk 1 (High). The Department of Public Health has classified Risk 1 as fairly common, usually requiring a quick fix such as re-cleaning cooking surfaces or reaching out to pest control.

Arroyo denied that he goes there for discretion, citing his willingness to talk to reporters at Erie in the past.

“I appreciate a reporter’s job, so I’m not going there for the discretion,” he said.

In an email to reporters for this story, WTTW journalist Carol Marin described the restaurant as the place where “powerful pols go for expensive big steaks, ice cold martinis and each other’s company.”

“I from time to time go there to ‘run into’ some of them,” she said.

Some politicians declined to comment entirely and Berrios — the biggest spender since 1999 according to Illinois Sunshine — could not be reached for comment.

Deba Shore, who spent nearly $5,000 at the restaurant during a campaign event in June — and over $37,000 total since 1999 — said she goes there for its connection to the Chicago River.

She’s a decades-long board commissioner for the Metropolitan Water Reclamation District and holds an annual summer solstice for her donors on the back patio of Erie, which sits on the Chicago River. 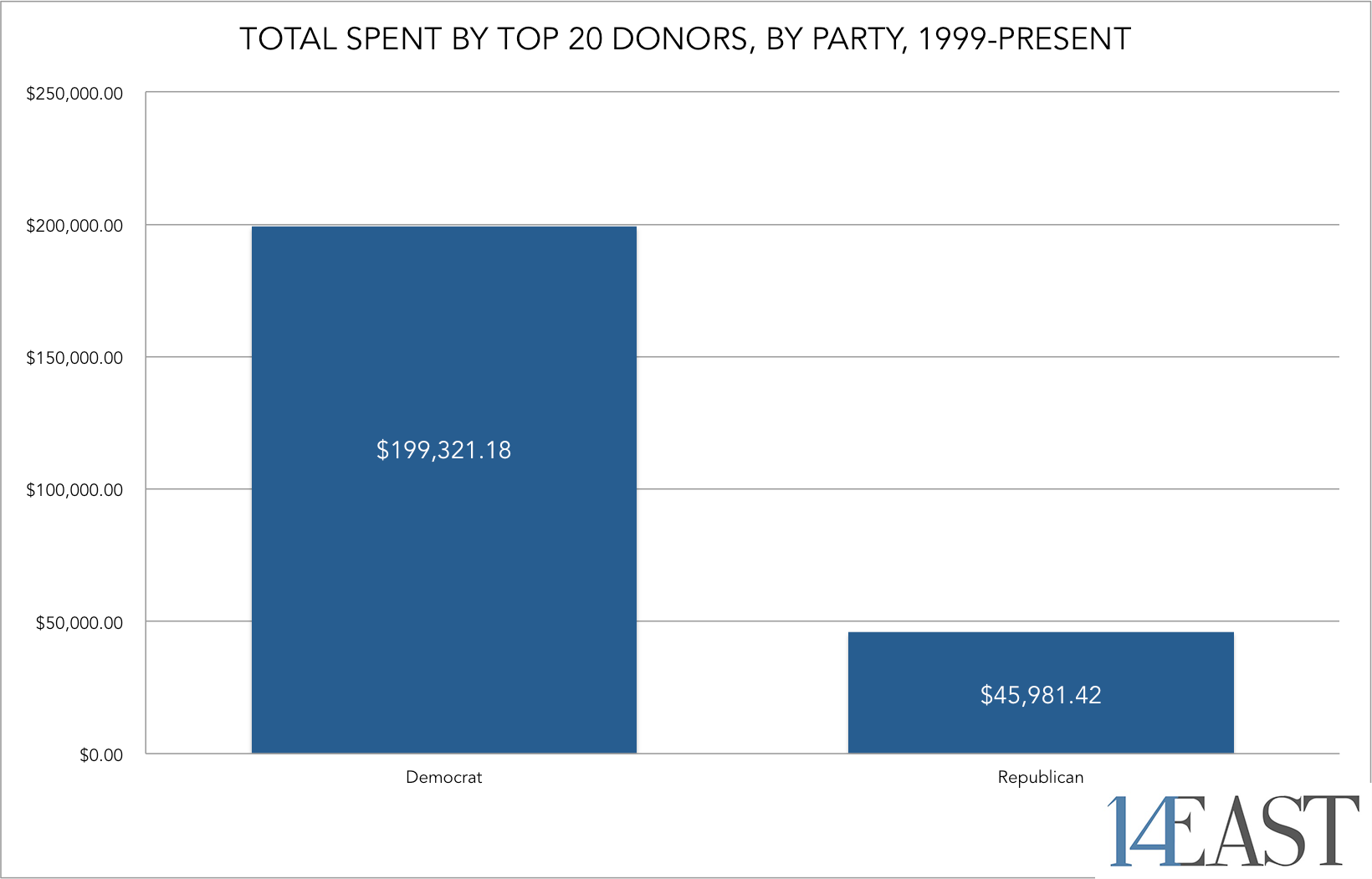 But while Shore declined to comment on the suggestion that politicians patronize Erie for its discretion, she did say that there is value in talking over steak.

“I think as long as there are no violations of the Open Meetings Act, it’s important for elected officials to meet with each other and members of the public to hear what they’re thinking and to help train their approaches to things,” Shore said. “Being able to do so in a setting that’s comfortable and maybe not so noisey is important.”

The Open Meetings Act makes it illegal for public bodies to negotiate on matters that affect the public behind closed doors. It requires public disclosure of times, places and subject matter of public body meetings.

While it would be a stretch to say that politicians are breaking the law by speaking over steak, it’s apparent that Erie Cafe sees itself having a stake in the political system.

After further inquiry, a manager at Erie agreed to speak with DePaul reporters.

Over the phone, Gabriella Lenzi explained Erie’s popularity with Chicagoans in general, not just political figures. However, she also noted Erie’s discretion could play a part in attracting Illinois politicians.

“Everyone likes to come to the Erie because we’re reminiscent of days gone by,” Lenzi said. “We treat customers with respect, honor privacy, and treat them all equally. We have a loyal following since we opened in 1944.”

Shore agreed, citing Erie’s old-school Chicago feel as her guess for why politicians love to frequent it.

According to Lenzi, elected officials do not make up the brunt of the Erie’s customer base; she did acknowledge their presence at the cafe, however.

“We have a wide swath of people who work in all levels of government and they respect the Erie as an institution,” Lenzi says.