In 5 Words or Less

A Chance in the World: Pemberton

A Chance in the World: Pemberton 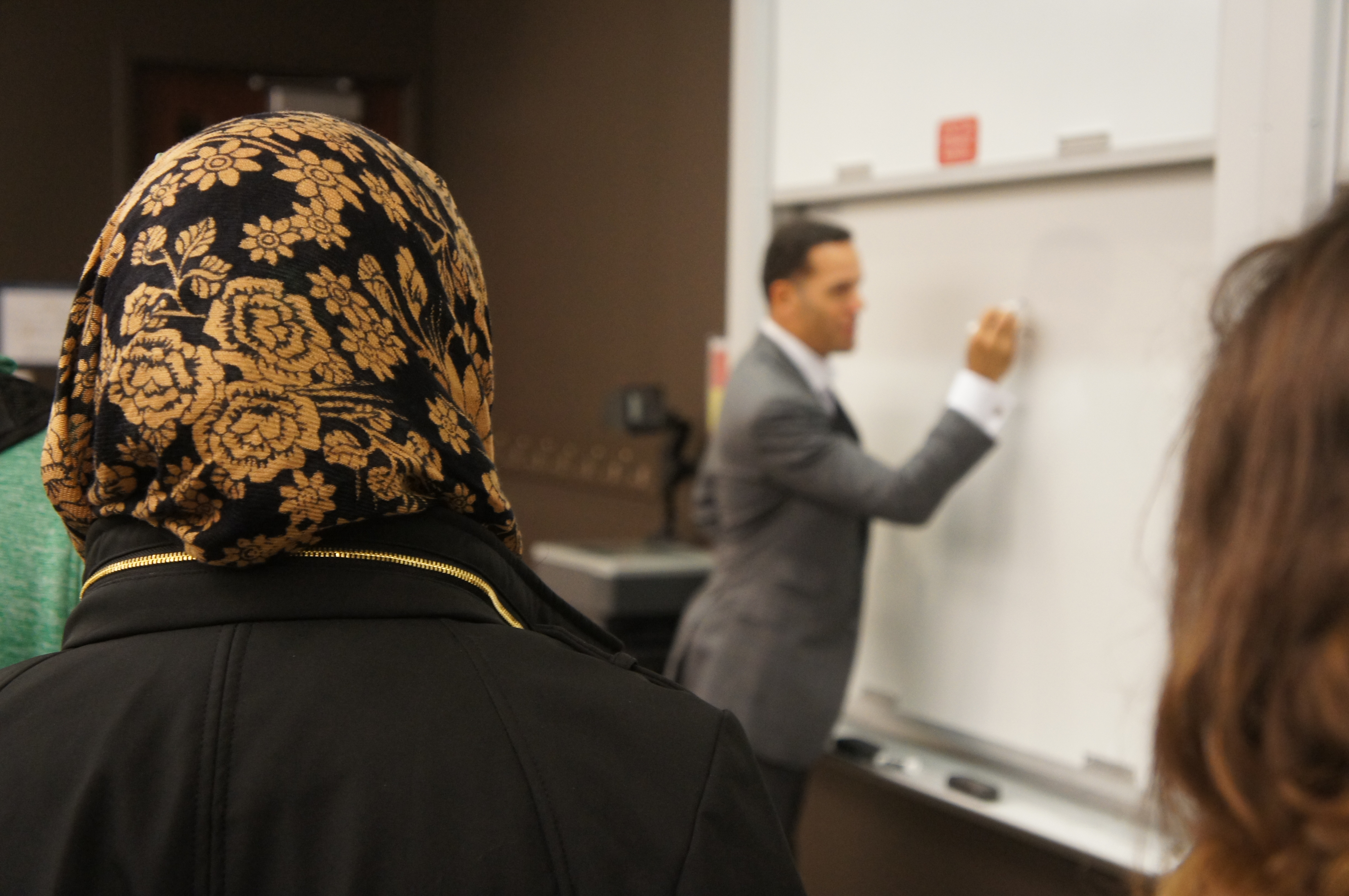 Imagine that at age three, you were taken from your mother. Soon after, you were placed into foster care and, at age five, were moved to what would be your childhood home. There, from your “family,” you received beatings, starvation, obstruction to your goals, and criticism. There was criticism of your aspirations, your unusual appearance and name, and your family lineage — a part of you that even you didn’t know about.

The only solace you would find were in books given to you by a stranger who noticed your captivation with reading, and the little acts of rebellion you committed, like stealing food from grocery bags and sneaking out to learn about who your father was. As you got older, you became more outspoken, and because of that received more backlash. Extracurricular activities were not an option, and when you voiced your desire to go to college, you were struck down — told that even with a full-ride offer, your “parents” would refuse to do their part in helping you get in.

It was your senior year of high school when you finally found the courage to tell an adult what was happening at home. It was over. You got into the school of your dreams, and you were ready to discover the truth of your family history — a history with a reputation that has affected how others have viewed you your whole life. You found surviving members of your family and realized that a few had no interest in maintaining a connection with you, partly because of the closed wounds you opened by bringing up the past. You learned that both of your parents died young, while you were still a child, and fought with addictions of drugs and alcohol. You slowly began to question whether you made the right choice in trying to find out about your family’s history or if it would have been easier to remain ignorant of the past.

Now, try to consider you are the lucky one. Everything you endured was necessary so you could tell, not your story, but the story of those who went through the same or worse. No, the struggles you went through were never about you. They were there, to help you understand and connect with people who experienced similar lives. While you found a stranger who cared enough to give you books, there are those who never experienced another person’s kindness. You reconnected with your family and gained closure over your past. Some will never know where they come from and will be left searching for answers they will never get. Your life ended in triumph. You made it out alive. You beat the odds. That’s more than many can say.

This is Steve Pemberton’s story. The divisional vice president and first ever chief diversity officer for Walgreens has dealt with these issues and more throughout his lifetime. Associate director of the Honors Program, Nancy Grossman, brought him in as the first speaker of the DePaul Honors Program’s speaker series as she believed that “Pemberton’s story of persistence and triumph, coupled with his personal mission to serve youth, would fit nicely with our exploration of the Vincentian question,” known to DePaul students as “what must be done.”

Pemberton’s story is told in his memoir, A Chance In The World. Although the book was originally meant to be ghostwritten, Pemberton realized that he and the writer would not see eye-to-eye on how the story should be told. One of the first confrontations regarded Pemberton’s mother. “He didn’t understand that as a son, I was going to protect her,” said Pemberton. This wasn’t the argument that ended their working relationship however.

The ghostwriter finished the first chapter and handed it to Pemberton, who read it and thought it was done very well. On the other hand, his wife Tonya, after reading the chapter, had remarked that “it’s nice.” Pemberton wasn’t pleased with the response and asked her why she thought it was only nice and not great. Tonya replied, “just remember: A Chance In The World is not about your parents, it’s about you.” Pemberton, agreeing with his wife, then relayed the message to the ghostwriter and asked him to rewrite the chapter with that focus. The ghostwriter replied, “tell her, don’t interrupt Picasso while he’s painting.”

Let’s just say that soon after, Pemberton took control over the writing process. To convince the publisher that he could do it, he had to write the first chapter and the outline of the story before  sending it in. After all, Pemberton wasn’t known for his writing ability, but he was – and still is – an avid reader. It turns out that he picked up many writing habits through his readings. The publisher gave him a three-week deadline to get it all done. He was finished the very next day. Not only was it done fast, but it was done well, and the publisher agreed to go on with Pemberton writing the story.

As shown in the book, Mrs. Levin, the stranger who found Pemberton reading on the sidewalk one day, forever changed his life with one little action. Pemberton, still a child at this point, walked back inside his foster home, when suddenly there was a knock at the door. Mrs. Levin had come back with a box full of books for Pemberton to read. Pemberton’s foster mom, Mrs. Robinson, in typical fashion, tried to deny that Pemberton was interested in reading, but he could not hide his enthusiasm when he saw Mrs. Levin. That became one of Pemberton’s first acts of rebellion against the Robinsons and he embraced it, as reading became a major part of his life.

The title of the story comes from a diary entry written by one of Pemberton’s childhood caregivers. Pemberton’s curiosity of what people thought of him made him take the page from the diary. It had said that “Steve doesn’t have a chance in the world.” Still, after reading that, Pemberton was not fazed. In fact, he took that as a challenge and has used that mindset all of his life. Detailed in A Chance In The World, there is an altercation with Betty Robinson, his foster mother, that shows this nature. Pemberton had come home with a registration form for the PSAT, and mentioned wanting to go to college. Mrs. Robinson brought that dream down immediately by responding, “who said you were going to college? You might as well put that thought right outta your head.” Instead of getting it out of his head, Pemberton used college (Boston College specifically) as his personal motivator and his primary plan to escape the Robinsons. That same philosophy also helped him decide how he would write the book. “I wanted to give you, [the reader], the impression that I was always fighting,” he said in an interview.

In the interview, Pemberton also said that he initially wrote the book so he could gain closure with his past. What he didn’t expect was that others would relate to his story as well. He began receiving messages from people across the world whose lives were similar to his and that, by reading his book, they also found some closure and peace. “I didn’t sign up for my life; nobody signs up for something like that. But I felt responsible for changing the arc of it. My faith tells me that I endured what I did, not for me, but for those who didn’t make it. Not everybody gets through it intact,” Pemberton said. Some people know they feel something, but just can’t put it into words. Pemberton’s book gave those people an outlet to express those feelings that have stayed inside them for so long; as it did for an Irish man who reached out to Pemberton and told him of the impact the book had on him. Pemberton stated how the man had contacted him, explaining that his life was very similar to Pemberton’s and that he did not know how to be at peace with his past; until he read the book.

When he arrived at DePaul to speak,the electricity in the atmosphere  as Pemberton spoke was palpable. He began with a baseball anecdote of the Boston Red Sox and how he was thrilled when their curse was broken in 2004, then compared it to what the Chicago Cubs would accomplish in the coming days.

A light-hearted start  quickly turned serious and enthralling; the room full of students was silenced as they listened to Pemberton start retelling his life story and the process in which it became a book. Maciej Piwowarczyk, a DePaul freshman, was one of the students who read Pemberton’s book and attended his lecture at DePaul University. He saw these opportunities as a possible learning experience and was eager to get more involved with the Honors program. What Piwowarczyk got out of the experience was more than just simple exposure to a problem. “From the lecture, I learned how you should be looking at where you want to be, rather than dwelling on where you are,” said Piwowarczyk. A large theme of Pemberton’s lecture, as well as in his book, was how people can’t let their current situation dictate how they approach their goals  “You can’t be afraid of where you’ll land if you never leap. Leaping is more important than landing because without that first step, you won’t land anywhere anyway,” claimed Pemberton.

While it’s important for everyone to take as much control over the direction of their own life as possible, everyone still needs support from others in their lives to succeed. “Even the tallest tree, with the deepest roots, will fall if it doesn’t get nourished,” said Pemberton. The books he received from the stranger, Mrs. Levin, during his childhood are what he credits as his support. They gave him an outlet to live in different worlds from his own, and with that, he found an escape from the problems in his life. “Everyone just needs a little nudge of support,”  he said.