A Chance in the World: Pembert.. 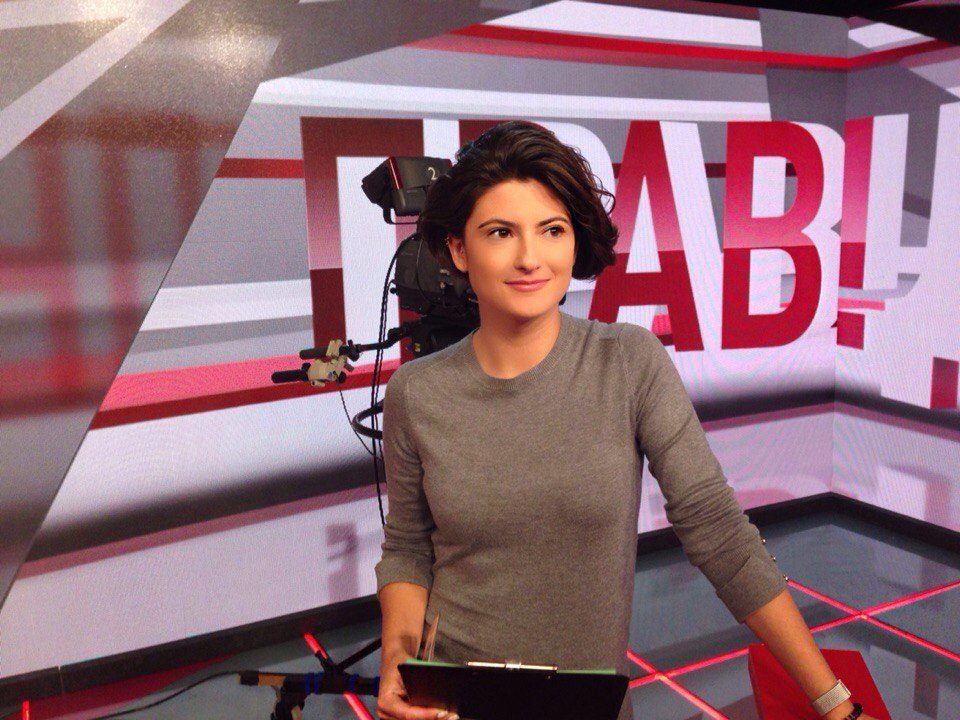 Almost accidentally, my 10-year long dream of becoming a TV host came true. My friend called with news of a casting being held for Public Television of Russia. Two weeks later, I was the host of a public-affairs TV show. With no previous experience or professional education, I explained to people from the other side of the screen what was really going on with education, medicine, politics and economics in the country. It was the perfect job for me – you get to read a lot, analyze news, meet new people, serve the public, plus every time they give you a new dress for a program.

Being a journalist in Russia is tough. Journalists have been killed; free media was closed; foreign media companies were forced to leave – that’s what the 2010s looked like in Russia. Anna Politkovskaya was killed because of her reports describing life in Chechnya. Oleg Kashin was attacked and injured for reporting about political protests and pro-Kremlin youth organizations. The only opposition channel “Dozhd” was forced to broadcast online and by subscription.

Many reporters try to escape to Europe or the U.S. in search of the freedom of speech we heard so much about. Now, as a Russian student getting a masters in Journalism in Chicago, I have a chance to see whether the American media market differs from the Russian one. Especially in terms of political news.

In 2016 both nations made a choice. The U.S. chose to elect Donald Trump. As some Americans have put it, this time they didn’t  vote “for,” they voted  “against.” Russia, on the other hand, participated in a spectacle called the “Duma elections.” Every five years Russians choose political parties to represent the nation in Duma (Russian Parliament). “United Russia,” the party in power, has won elections four times since Putin came into  power when  the party was created. However, Election fraud was revealed in 2011 and caused massive political protests in major cities but no significant changes were made to the election process. This year’s elections in Russia showed record low voter turnout with on 47.9 percent of population voting. Officials said one of the reasons for these abysmal numbers was poor media coverage prior to the election. But, was it the media’s quality of coverage or was the audience just not interested?

To Trust or Not To Trust

After the army and the church, Russian media has the highest approval ratings among citizens. This is much higher than political parties, courts and law enforcement. According to the Russian Public Opinion Research Center from September 2016 the approval rating was 62.4 percent, while only 26.4 percent disapproved of the media’s performance.

Television is the most popular way of getting information at 77 percent in comparison to other media outlets, but only 36 percent of people trust it according to the Public Opinion Foundation.  Another trend is that the smaller a town is, the higher the media trust rating according to the Public Opinion Foundation . With fewer information, more people are willing to trust the media outlets they have.

But do Russians approve of them more than of any other public institutions and political powers? Seems so, according to poll results. However, surveyors dissemble calling Russian media a public institution. In Russian, the word “public” (“obschestvenniy” in Russian) means to be created and controlled by the public. The state either owns or financially supports nine national TV channels, 80 regional TV stations, two national newspapers, six radio stations and a couple of news agencies. State controlled oil company, Gazprom, owns the second largest holding. The list goes on, but one thing is obvious: the majority of the media is not as “public”, meaning controlled by the nation, as it should be, depending on the money coming from the state.

Duma officials claim that the lack of trust goes back to journalists. “The  audience doesn’t trust the media because of journalists’ lack of professional skills,” said  Sergey Zhigarev, Chairman of Committee on economic policy, industry, innovative development and entrepreneurship.

This is strange  because most media holdings are told by Kremlin curators what to cover and how to cover that news. Galina Timchenko, CEO of Meduza.io and former chief editor of Lenta.ru, put it well in a released statement after her dismissal from Lenta.ru. “In the last couple of years the space of free journalism in Russia has dramatically diminished. Some outlets are directly managed from Kremlin, others through curators, third by the editors who are afraid to lose their job. Some media are closed, others will be closed in the coming months. The trouble isn’t that we’ve got nowhere to work. The trouble is that you, it seems, have nothing to read,” Timchenko said.

The Kremlin media curators are the ones to blame. People realize that the prices they see in grocery stores, or even their own salaries, don’t match what the news says  about economic growth and prosperity of Russia. By the end of 2015, GDP was the lowest it has been and inflation rate was at an all time high in the last five years .

Maybe it’s not about the lack of professional skills, but about what the nation’s politicians want the people to hear. Since August 2015, the media mistrust rating  went up by 10 points – from 41 percent to 51percent according to Public Opinion Foundation. Does this  mean that journalists drastically have become more and more unprofessional?

“The rate of mistrust proceeds from obvious manipulations done by the journalists, which, moreover, are performed unprofessionally,” said  Helena Sarkisyan, the Director of the Department of Public Affairs Broadcast on Public Television of Russia. “The journalists lie for political practicability. Those who are not ready to present glaring falsehood for money left either the profession or the country, others were killed or threatened.”

Sarkisyan points out that today the freedom of speech is only 26 on the priority list in Russia. This suggests that neither journalists nor the audience value it.  Rather, propaganda has almost replaced straight information. 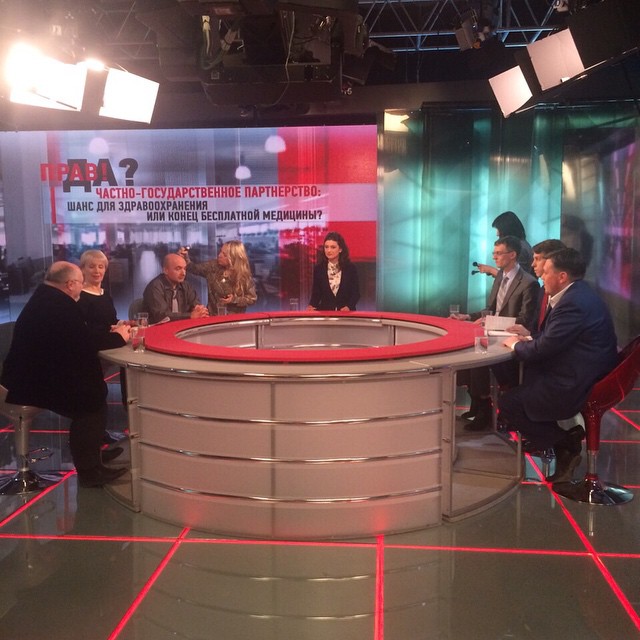 There is a stereotype I’ve heard many times from my friends that in America being a journalist means having an ability to write and talk about whatever you want. Surprisingly to me,  the U.S. is only ranked 41 in the World Press Freedom Ranking brought by the “Reporters Without Borders.” But they are still well ahead of Russia by 107 points.

It was a shock to find out that here, in the land where American dreams come true, a majority of people also don’t trust the media.  According to research conducted by Gallup in September, only 32 percent of people surveyed said they trust the media. The  rate of trust declined in both age groups, 18-49 and 50 and older. Younger people tend to lose confidence faster even though just 15 years ago they put more trust in the Fourth Estate, or simply put the press.

“I don’t think it’s all on the media, I think a lot of it has to do with the laziness of consumers,” said  Christopher Bury, PBS NewsHour Special Reporter. “There’s a certain responsibility of citizens to try to find information that can be verified, that is valid.”

Of those surveyed, young Republicans are the most doubting Americans. According to the Pew Research Center, Republicans distrust 24 of the 36 media sources. And of those,  88 percent of them rely on Fox News.

Coverage of the 2016 General Election may be the cause of the distrust. The Republicans saw coverage as biased in favor of Hillary Clinton. . However, Democrats seemed to be more content with the way the election was covered.

“Republican candidate Donald Trump has been bashing the media and telling his supporters that it’s dishonest, that it’s lazy, that it’s corrupt, that it’s rotten. But never before has a major candidate for President lead Americans to distrust the mainstream media,” Bury said.

So Different, But Yet So Similar?

Political news has been at the forefront of American media over the course of the past several months. While in Russia the whole media pattern started to change after the Crimea case, and European and American sanctions were imposed on Russia. This brought  economic news to the foreground. With Russian citizens facing economic struggles, it becomes a battle between the TV set and the fridge. When you can no longer afford the food you used to buy, you’re likely to stop believing news anchors reporting about the economical success of the country.

It is clear that the one thing that the two nations have in common is their mistrust of the media. But that’s as far as the comparison goes. While America’s media developed throughout the 20th century, the Soviet Union replaced socially responsible journalism with propaganda to a much greater extent than any other western country. Now, modern Russia finds itself in an era of partisan press – a concept that the United States abandoned in the 19th century.

Trust, in its simplest terms, means you can rely on someone without any doubt. Maybe this new “trust-mistrust” trend shows us that we have become more skeptical. Maybe it’s not about the media, but about us.