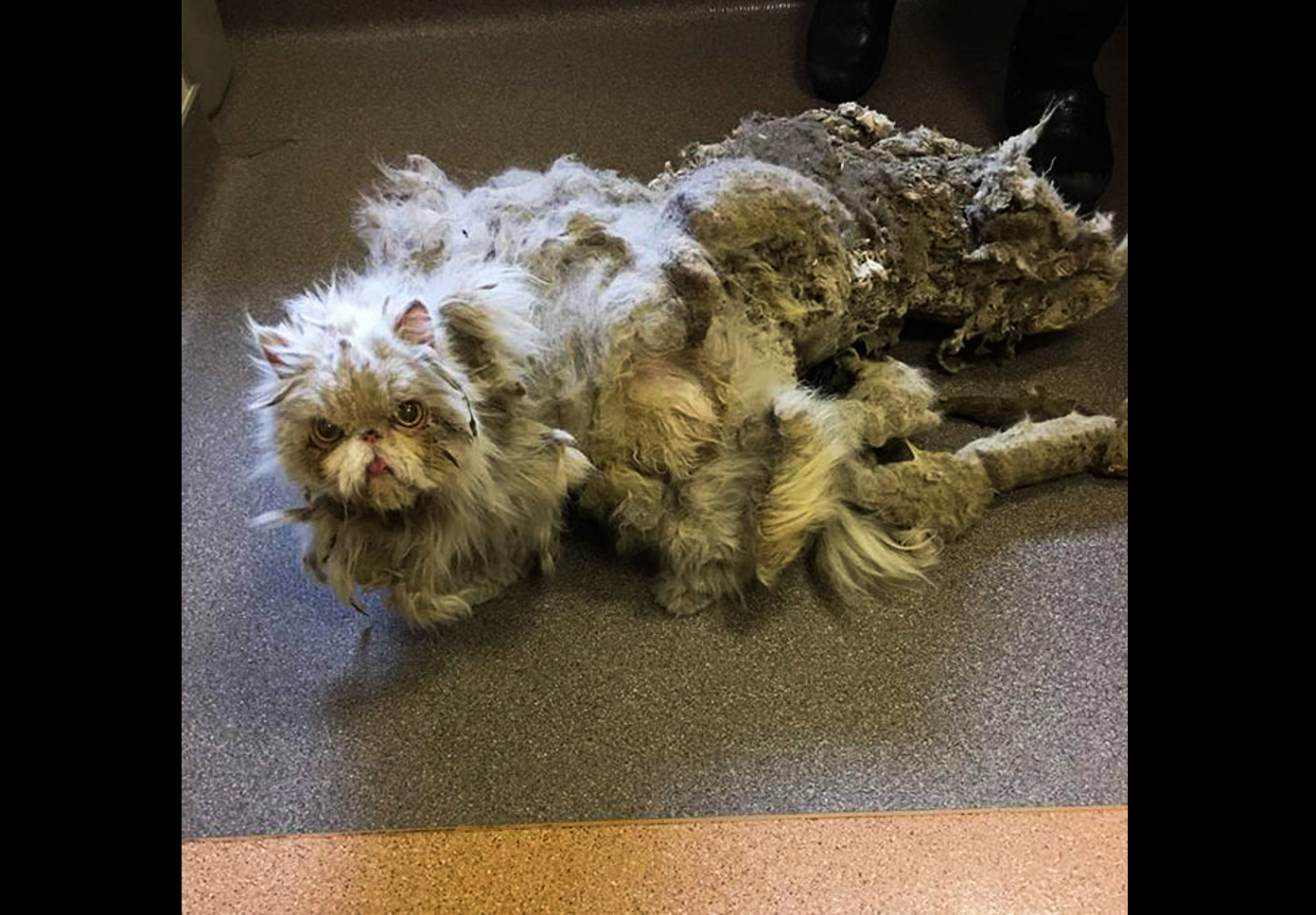 Found matted and frail after facing neglect for years, the Persian cat Sinbad was brought into the arms of The Anti-Cruelty Society. The manager for the Humane Education Department at the Anti-Cruelty Society, Elliott Serrano, was unaware that his heart would melt when Sinbad came home over the 2016 holiday season.

Sinbad was kept in the basement of his previous owner, an elderly gentleman, left to perish. A utility worker by chance spotted Sinbad in the basement window and immediately sought help from the Anti-Cruelty Society, according to Serrano.

Serrano recalls Sinbad looking as if “the cat was dragging carpet behind him.” The investigation team from The Anti-Cruelty Society went to check on the situation, which ultimately led Sinbad into the arms of Serrano. Over the holidays, it was imperative for the staff to take home the pets so they wouldn’t be alone in the office. Serrano recalls this being the time he was “suckered” into creating Sinbad’s forever home.

Chicago Animal Care and Control (CACC) is responsible for the “humane care of animals through sheltering, pet placement, education and animal law enforcement,” according to the City of Chicago.

There are multiple facets of CACC, which can be broken down into the following categories: administration, animal control, animal care, and anti-cruelty. The budgets for the corresponding years showed what funds these welfare organizations would be working with, according to the City of Chicago’s Budget forecast and analysis. In 2015, CACC had an operating budget of $5,645,443. In 2016, it was a total of $5,703,307. For 2017, the budget has increased to $6,340,736. The budget increased 17 percent from 2015 to 2017.

As the CACC budget increases, euthanasia rates have been shown to decrease. In 2015, there were 4,896 euthanized animals, in 2016 there were 3,766, and as of March there were 498 for 2017, according to the CACC. Through the increase in budget, coupled with a decrease in euthanasia, the CACC is able to assist more pets in the community through funding. 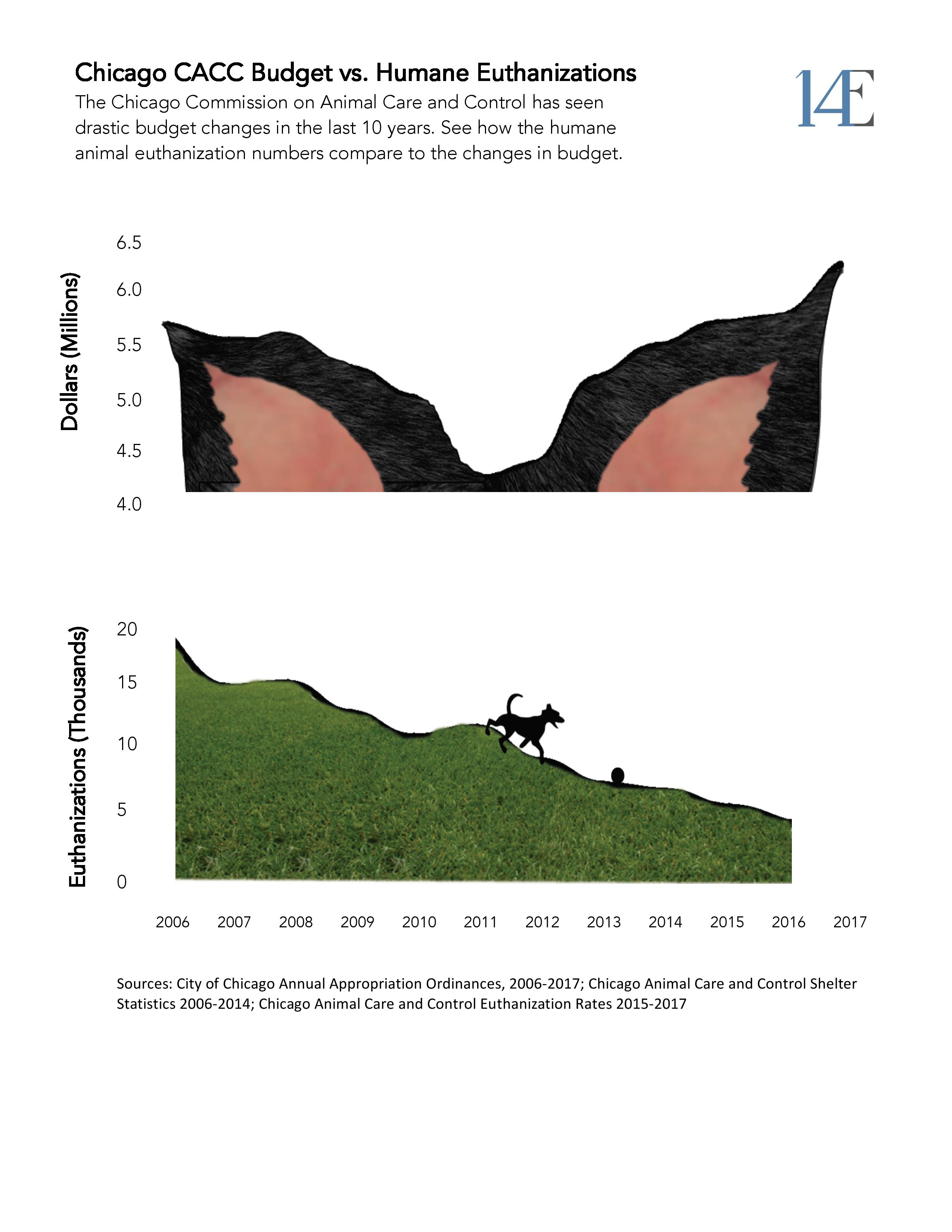 Meeting his current dog, Luna, through CACC was an amazing experience for owner Jake Gorman. “We didn’t just sit there and see her through the bare cage. We took her outside and played with her and got to interact,” Gorman said.

Yet the overall adoption process was quick, which worried Gorman. The staff at CACC didn’t check his credentials to verify that he could financially and emotionally care for the dog and ensure the dog wouldn’t end up in the same predicament as before.

Gorman also expressed frustration over customer service with Chicago Animal Care and Control. In a Google review, he stated: “How hard is it to contact a business… For this place (is) nearly impossible since they don’t handle anything over the phone for adoption.”

PAWS, another Chicago animal shelter, wants people to be weary of words like “adoptable.” PAWS shares that many poor-performing shelters will state that they are saving all “adoptable” pets.

The PAWS webpage offers insight into how some shelters operate, stating that “in some shelters, a pet younger than eight weeks of age, or older than five could be considered ‘unadoptable.’ We have even heard of shelters calling a black dog ‘unadoptable’ because there were too many black dogs at the shelter that day. This is why the save rate is ultimately so important. Numbers don’t lie.”

An aspiring veterinarian, DePaul University student Elizabeth Sutherland volunteers at PAWS. She also respects the fact that PAWS is a no-kill shelter and the history they have as one of the best and oldest no-kill shelters in Chicago.

Sutherland’s routine varies depending on the day, but typically it consists of cleaning, feeding, socializing and helping with adoptions. “The animals come first, so if we believe that someone is going to adopt a cat or dog and may not be the best fit, we are allowed to say something,” Sutherland said.

Elliott Serrano says that the Anti-Cruelty Society, a separate not-for-profit organization in Chicago under the Chicago Animal Shelter Alliance, is not classified as no-kill. The Anti-Cruelty Society identifies as open intake or limited intake. Serrano says that an open intake facility accepts all animals that are surrendered, regardless of their background and conditions.

The Anti-Cruelty Society tends to shy away from shelter terminology. “No-kill shelters are misleading because they imply no animals are euthanized under any circumstances,” Serrano said. “Yet, no-kill shelters do euthanize animals due to health or temperament conditions.”

Serrano shares that the Anti-Cruelty Society is one of the most comprehensive animal welfare organizations in Chicago. This organization offers an array of services that are often unknown, such as an animal investigation team, an education team, a full-service hospital and one of the largest and most successful adoption programs.

“The role of animal welfare organizations is going to shift over the next decade. We will see overpopulation be brought under control,” Serrano said. The issue for these organizations will no longer be animals needing homes, but rather educating people on treating the ones we do have with care.

A challenge that many animal welfare organizations face is helping people recognize and understand the importance of animals. Serrano shares that here in Chicago people will ask: “Why do you care so much about dogs and cats when there are children being shot in the streets? There is gang violence and homeless people starving. Why do you care so much about animals?” Serrano says that although these questions are important and need to be addressed, his passion lies with animal welfare.

It is crucial to be cognizant and not ignore animal abuse. Many say it’s insignificant or “not my problem,” Serrano said. Serrano also states that if we consider having positive relationships with pets, young kids will see this and foster lifelong skills like responsibility and empathy.

For every Sinbad story, there are 10 that are unheard because people fail to speak up for these animals.

Now that Sinbad is happy and healthy, Serrano says he is grateful for the citizen that didn’t disregard this overlooked creature who is now placed in a loving home. 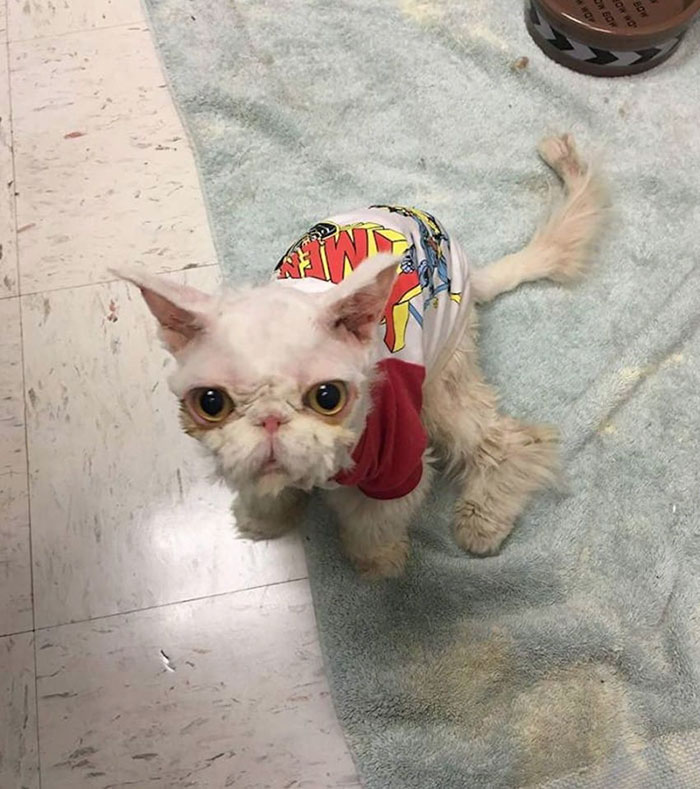 Sinbad after his groom (boredpanda.com)