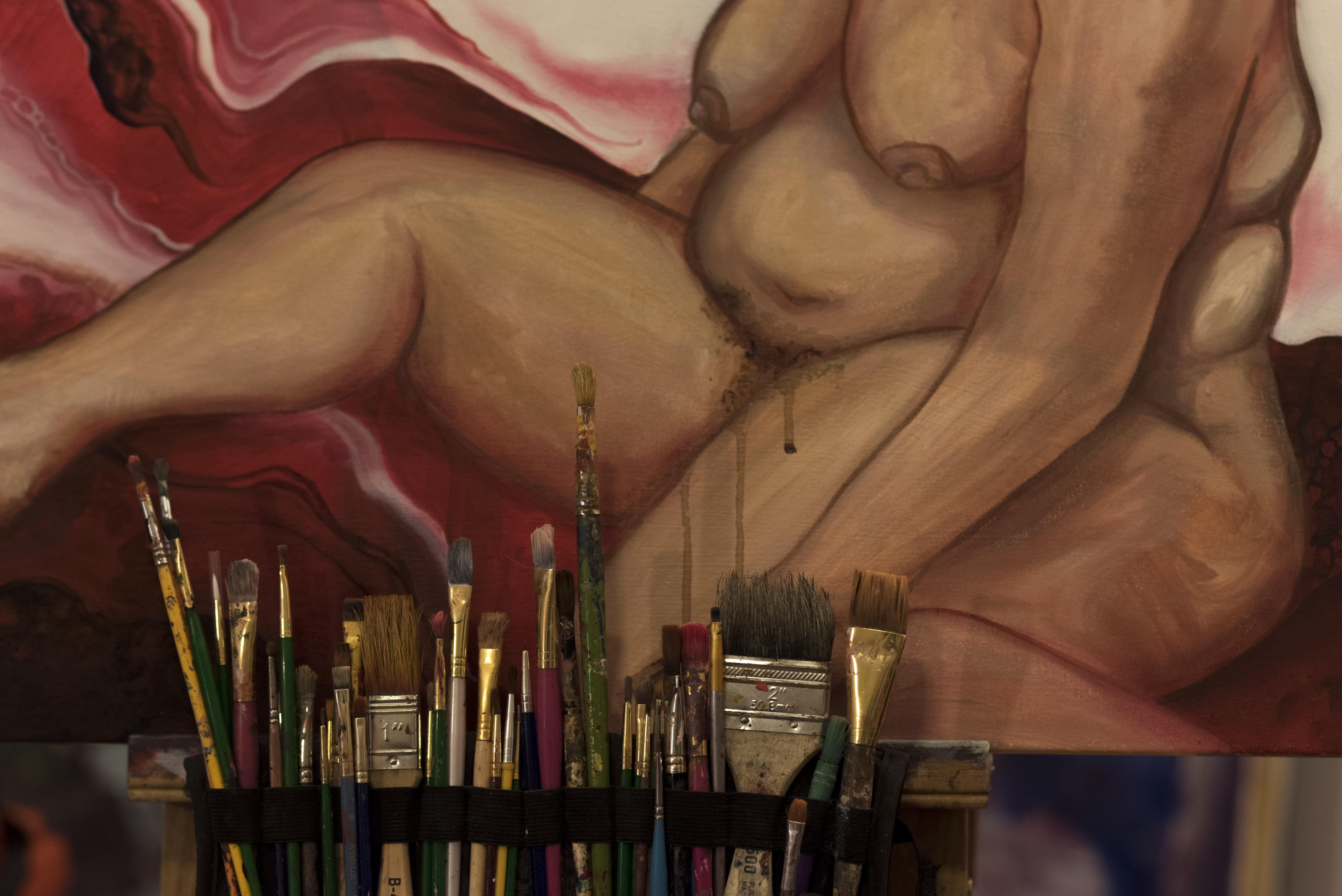 It was the day of President Trump’s inauguration, and Big Mama Red wanted to turn her rage into magic.

Big Mama Red was originally a fake stripper name created for a friend’s college short film. Now it is the signature of multidisciplinary artist Catherine Woods. For her day job, Woods works as a special effects artist on the sets of films, television shows and short films. Her dining room in Rogers Park acts as her home studio, with head forms covered in latex prosthetics and easels in place of a table and chairs. She has to close up shop at 10 p.m. so as to not disturb her roommates, but during the day she uses the space to work on professional projects as well as more creative passion projects.

Her most recent series of paintings, entitled “Blood Magic,” are portraits that celebrate the human body and utilize an unconventional material: her own menstrual blood.

“As a painter it struck me halfway through the series – I was like oh wait, my body makes its own pigment. That was a really fascinating thought for me.”

The series consists of seven nude paintings of people menstruating. They vary in race, sexuality and gender identity but are bonded by the power of flowing blood. The bodies and backgrounds are painted with oil paint, but the menstrual blood painted on each subject is real. 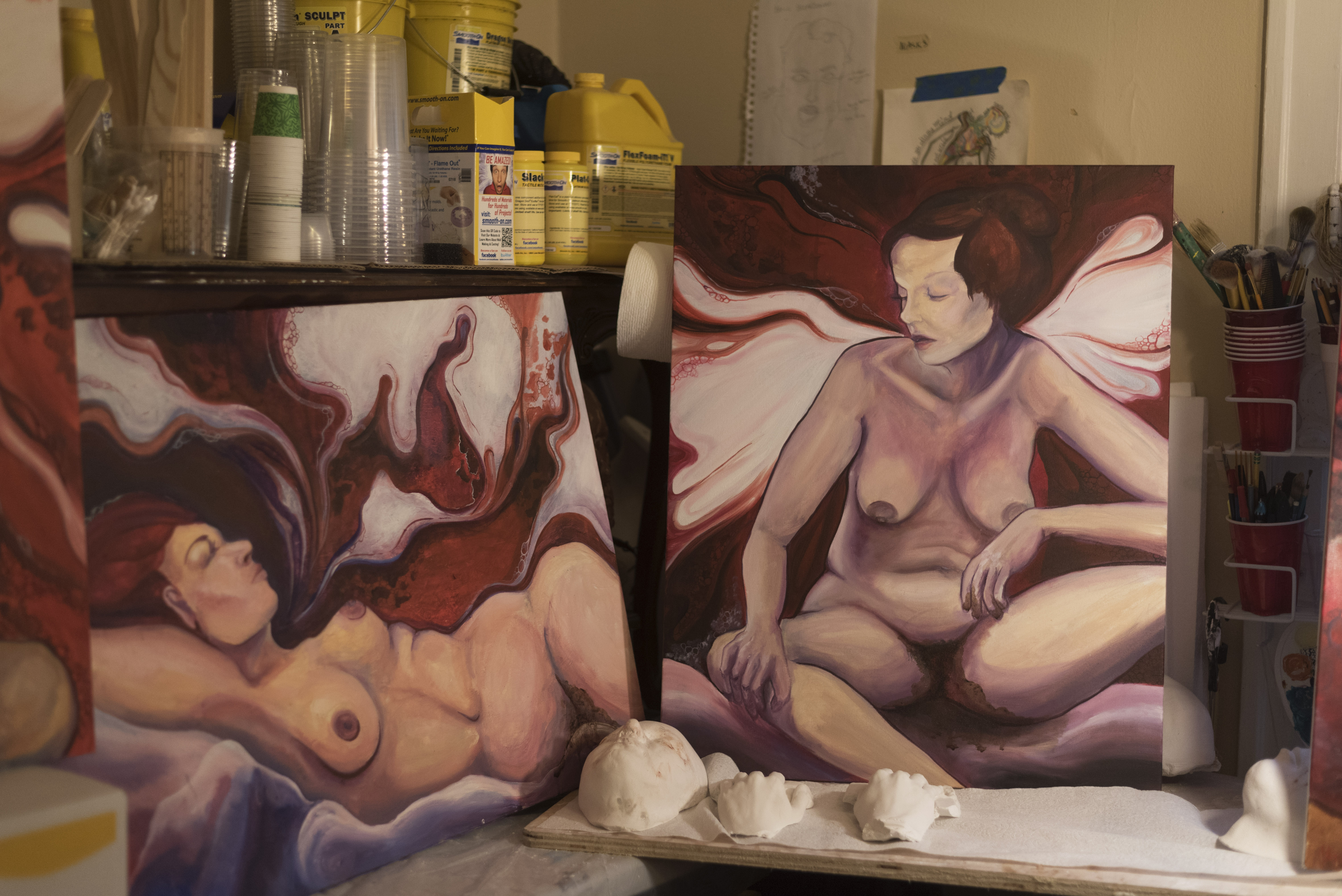 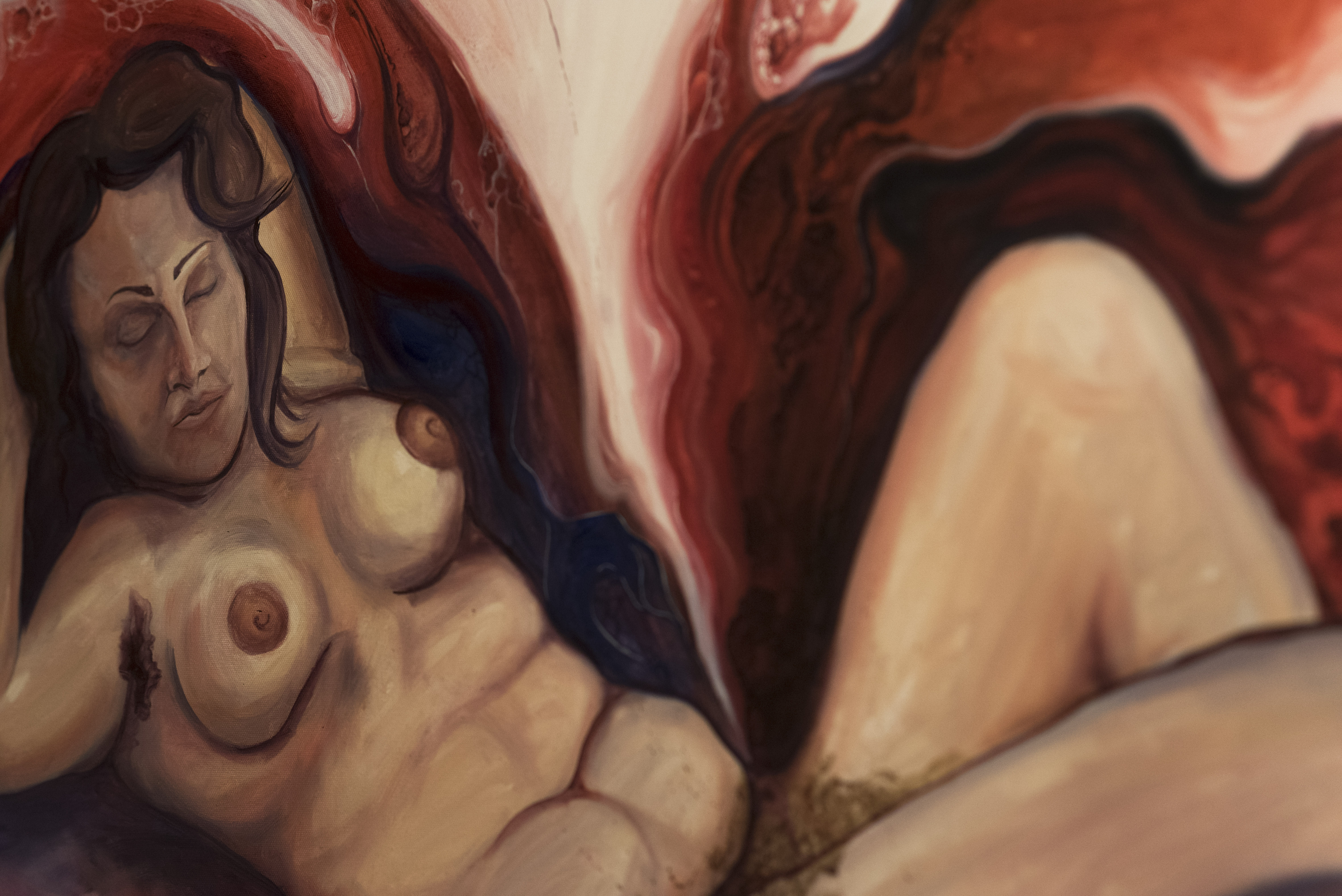 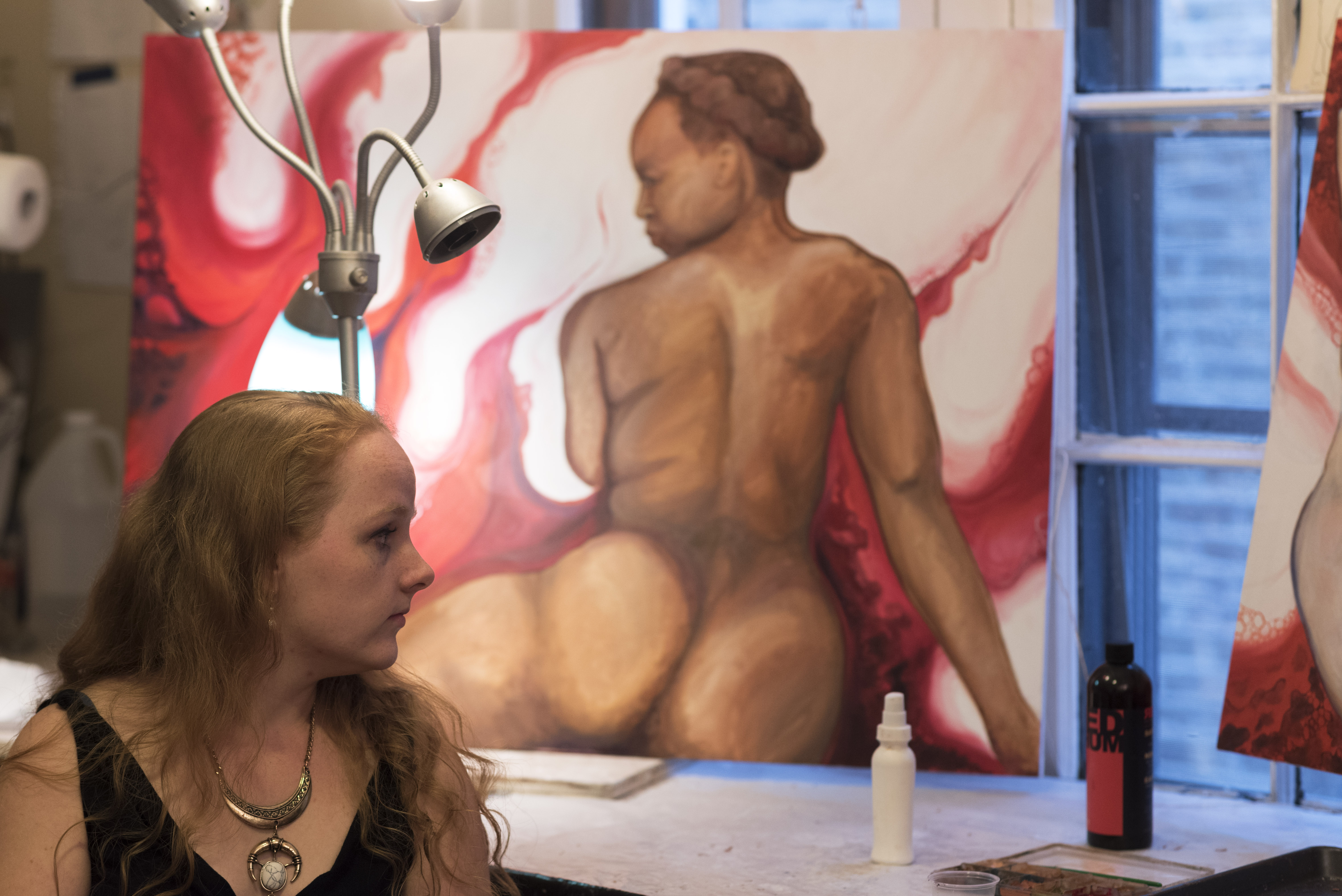 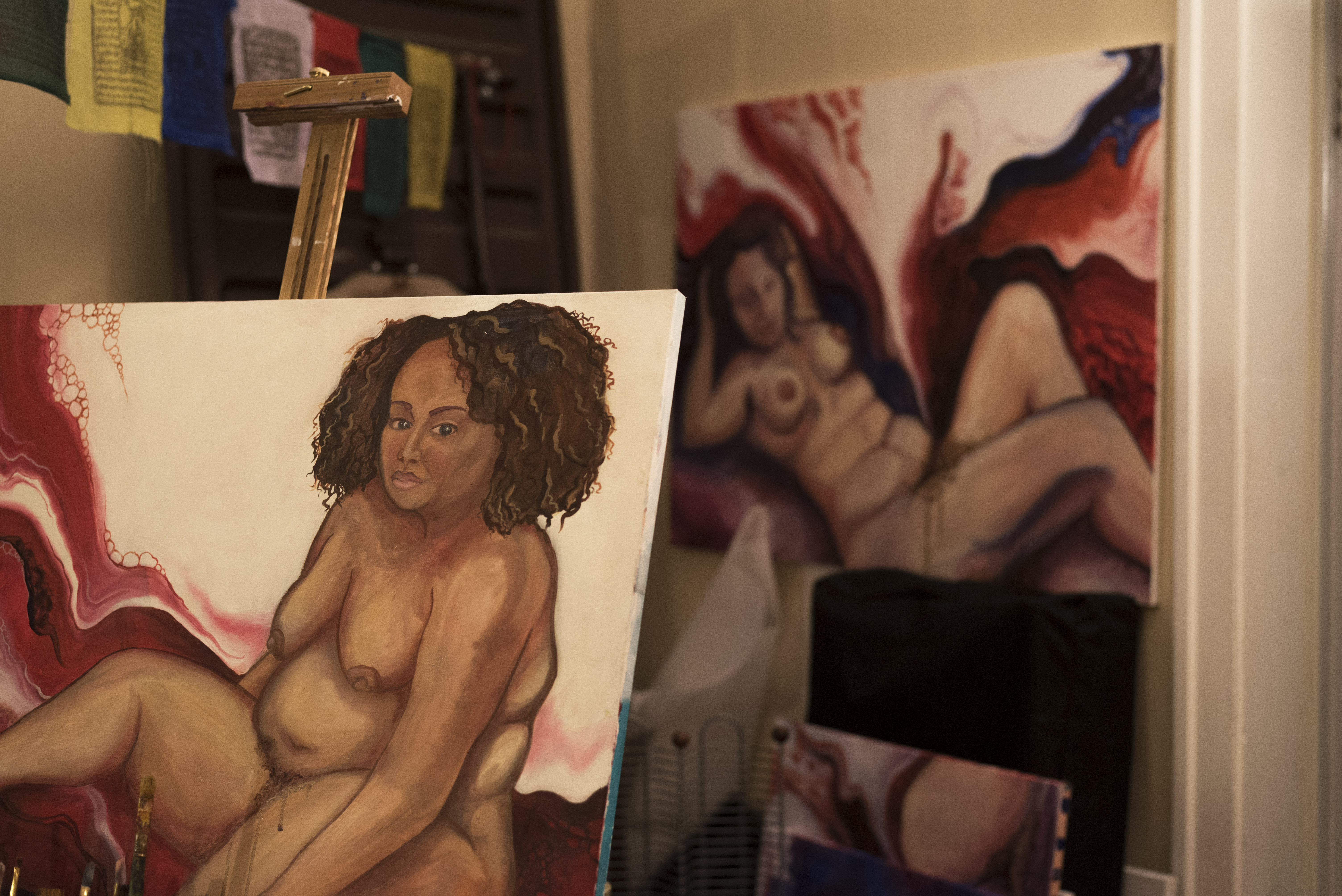 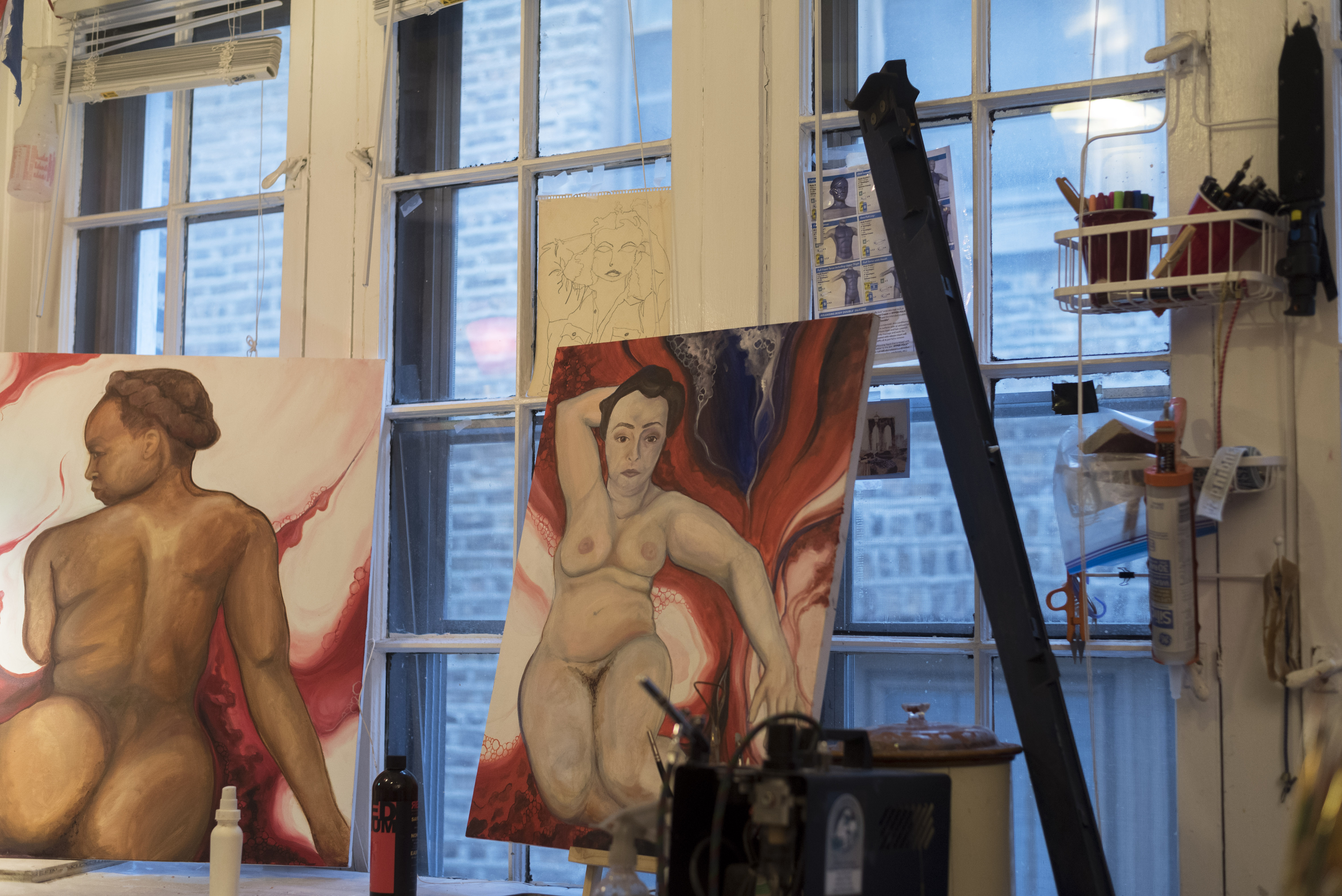 “The blood, when it dries, turns into this awkward brown color, it’s not bright red,” said Woods. “It’s kind of in contrast to how lovely and flowing the rest of the movement in the piece is and then there’s just this dried blood sitting right there.”

“Blood Magic” is a manifesto that aims to end the stigma surrounding periods by putting them in the public sphere unapologetically. According to the Association of Reproductive Health Professionals’ Menstruation and Menstrual Suppression Survey, only 8 percent of people who have periods enjoy it. 74 percent believe that they are at a disadvantage to those who do not have a period. 40 percent of respondents would prefer to not have a period at all.

As a queer woman and an artist, Woods strives to challenge beauty standards by giving power back to the femmes who are often exoticized and fetishized in the art world, as well as those bodies who are underrepresented.

“When you go into the Art Institute you’ll see all of these beautiful and luxurious nude women who were all painted by men,” said Woods. “I tried to pick poses you would see represented in lots of traditional nude female paintings and then throw in the menstrual blood as a bit of an F-you.”

The idea that menstruation is dirty or unhygienic can be dated as far back as formative religious texts, although these ideologies are present in contemporary texts depending on how conservative the practice is. Christian fathers used the uncleanliness of menstruation as a justification for the exile of menstruators, often women, from the church. In Hinduism, those who menstruated were seen as impure and weren’t allowed to enter temples, have sex, or drive a vehicle until they were finished with their period. In Islam, people who menstruated were allowed to live their lives as normal, as long as they didn’t have sex during their period. Jewish people who menstruated were considered unclean in the Torah, but modern interpretations differ by levels of religious conservatism.

“I don’t think men could understand how women could bleed so much every month and not die,” said Woods. “So I think it was just this very powerful thing that female bodies could do that men were threatened by or afraid of. I think it really just comes down to a place of fear.” 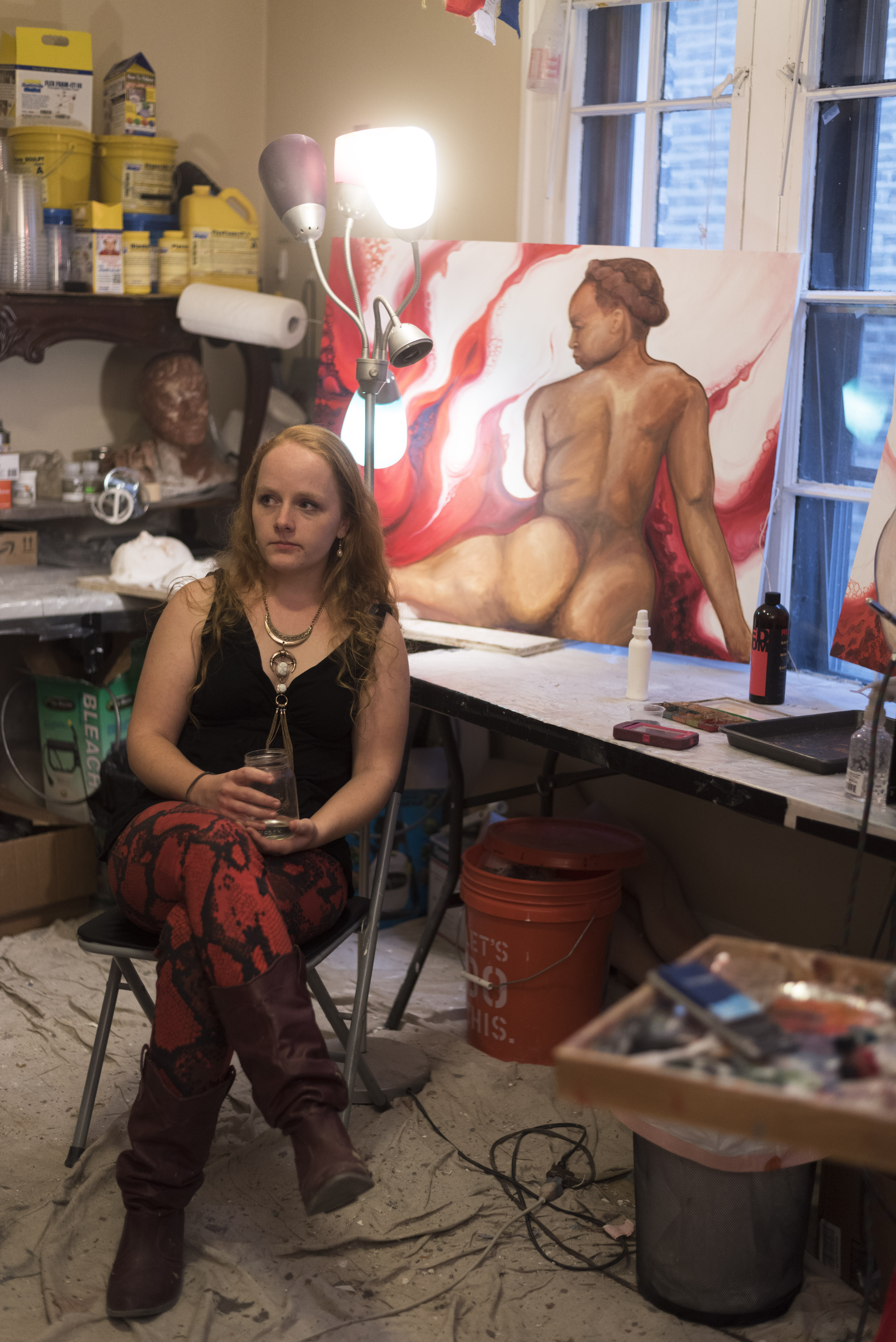 “It just occured to me that it’s an experience we always try and hide,” said Woods. “Every time it’s referenced in conversation it always has a negative context. It’s like ‘Oh, she’s on her period.’ Or like, ‘Are you on your period?’ Or when you’re in bed with someone and they’re like ‘I think you’re on your period.’ It’s like this really embarrassing thing that you don’t want anyone to say that to you. We spend a quarter of our lives doing this thing that we don’t want anyone to know about.”

Advertisements for menstrual products like tampons and pads often feature a blue liquid rather than a red one, and avoid the bodily fluid that created the industry in the first place. In 2010, the tampon brand Always released the first advertisement that used red instead of blue to depict menstruation. The ad was originally the personal project of Margaret Hartmann, an intern at Leo Burnett, Always’ ad agency in Chicago. The minimalist designs caught the eyes of Leo Burnett’s chief creative officer at the time and ran as an official advertisement, sparking controversy for the red dot that would become the first of its kind.

The most notable depiction of menstruation in film is the 1976 “Carrie.” Carrie gets her period for the first time at school and is immediately made fun of by her classmates who throw tampons and pads at her, humiliating her. She is demonized by her devout mother who believes her daughter’s period is a sign of mortal sin, and starts to develop strange powers. At the climax of the film, Carrie’s menstrual debut is antagonized again when her classmates drench her in pigs blood at their prom. 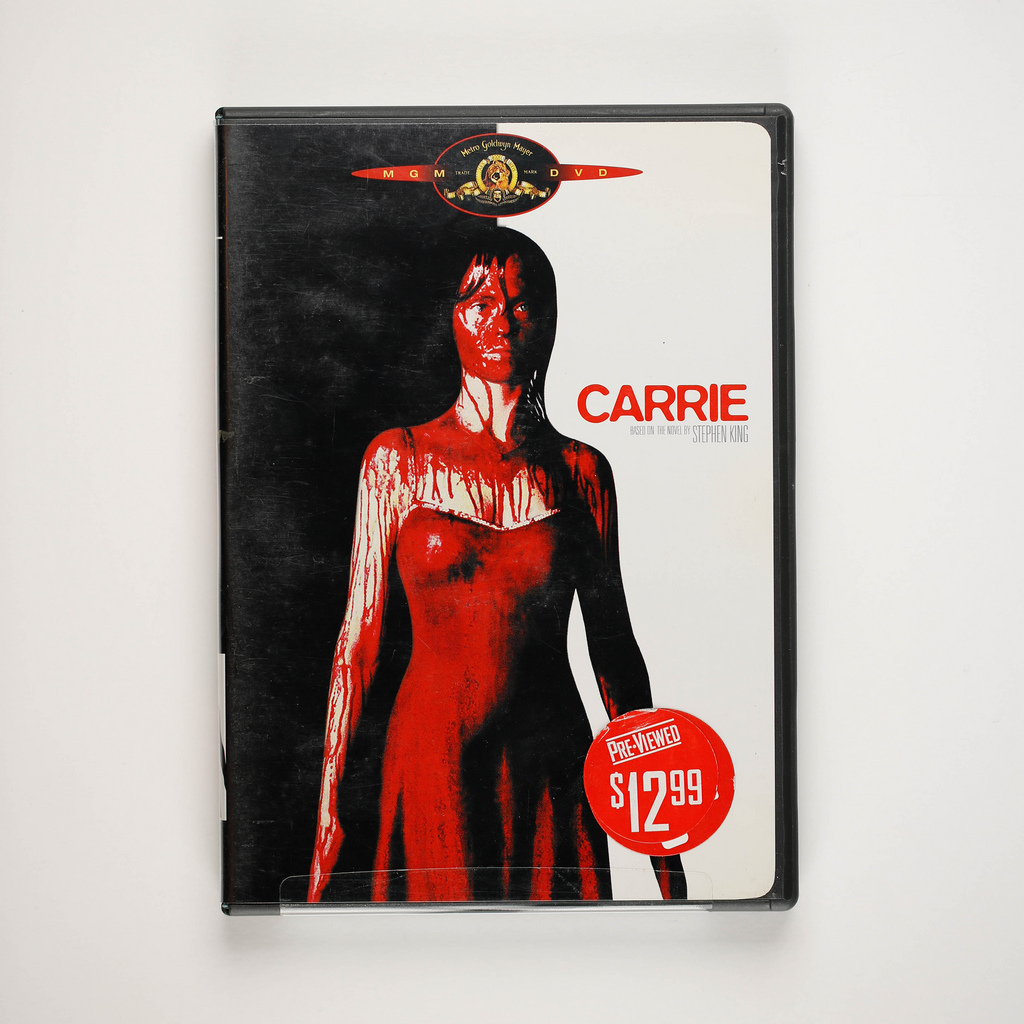 These ideologies still hold true in 2017 as seen by the societal unwillingness to talk about it. After centuries spent demonizing menstruation, it’s incredibly difficult to treat it as the normal bodily function it always was. The nicknames given to menstruation like “that time of the month,” “Aunt Flo,” and “shark week” enforce the narrative that periods are inherently unclean, or at the very least undesirable.

Big Mama Red is trying to change that narrative. When she finished the series, she decided to host a fundraiser that would give back to her community. 100 percent of the ticket sales as well as the proceeds from the auctions will go to Planned Parenthood and the Howard Brown Health center, which provide sexual health resources in the greater Chicago area.

“I just kind of wanted to bring it out here like here it is. Here’s this thing that we’ve been hiding this whole time, it’s not a big deal. It’s kind of cool, kind of beautiful, it’s also kind of gross but it’s allowed to be all of those things together.”