The Warmth of Nihilism in ‘Gro.. 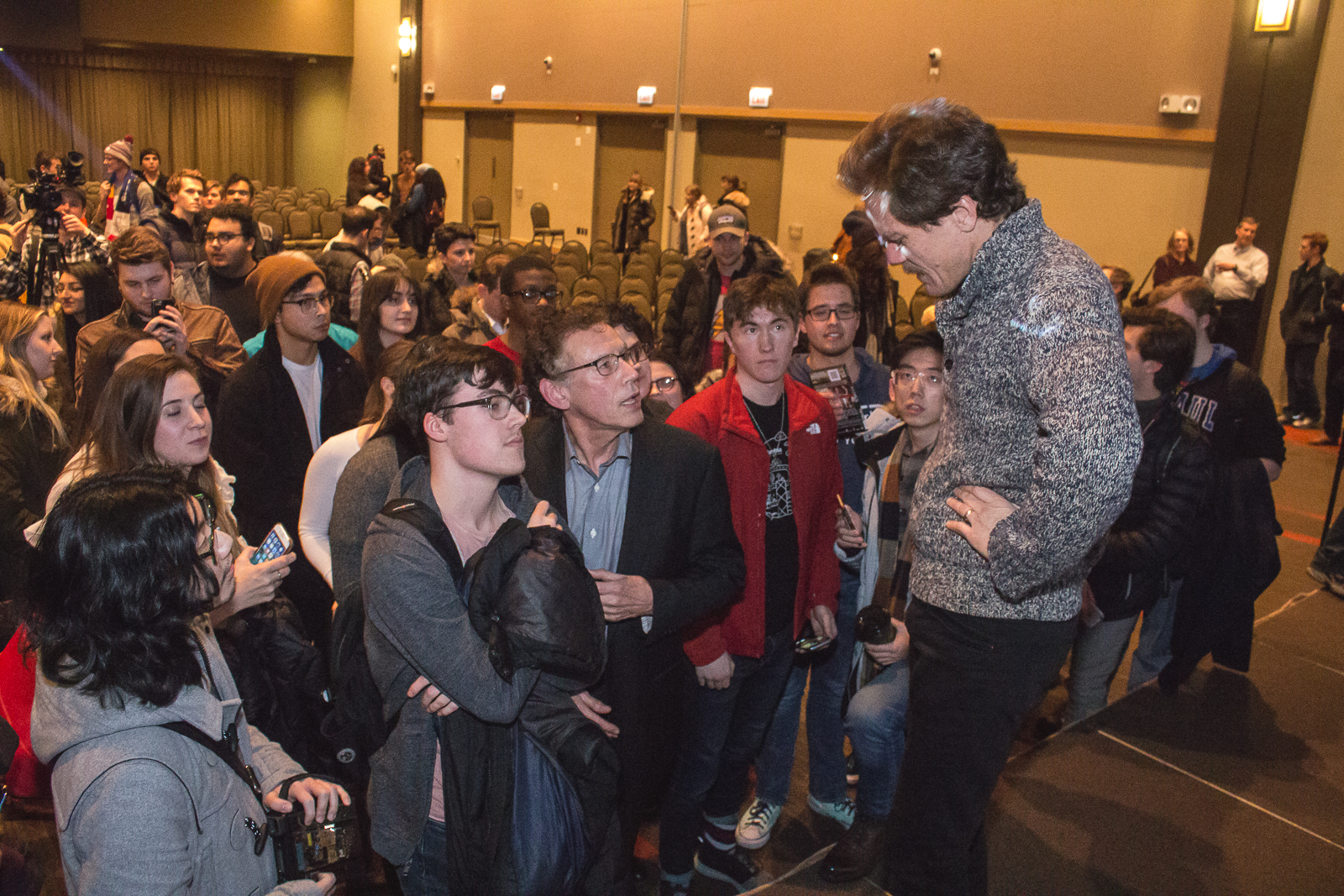 On Monday, Chicago-born character actor Michael Shannon — famous for his turns in films like “Mud,” “Nocturnal Animals” and “The Shape of Water” — visited DePaul as part of the Humanities Center’s “In Conversations With Great Minds” series.

Moderated by Humanities Center chair H. Peter Steeves, the talk packed more than 400 students and community members into the DePaul’s capacious Student Center conference room. It also included a screening of Shannon’s 2011 movie “Take Shelter,” a thriller about a man tortured by visions of an impending apocalyptic storm.

Following the screening and a 20-minute introduction speech by Steeves, Shannon  — whose father was an accounting professor at DePaul for more than two decades  — spoke candidly about his career both in film and theatre. He seemed amused by the depth and effusivity of Steeves’ introduction, which discussed his career through the philosophical lens of categoriality, or the practice of sorting differential parts into categorical wholes; in essence, how his work melds tragedy and comedy.

“You articulated things that I’ve been trying to articulate to people for years!” he joked, struggling to get his microphone to work over audience laughter.

Here are a few more of the evening’s highlights.

Spurred by the themes of climate change presented by “Take Shelter,” Shannon and Steeves talked at length about the current state of the environment and the threats to its sanctity. Shannon describes himself as having been concerned about the environment, particularly air and water quality, since adolescence, and said he canvassed for the public interest group Illinois PIRG as a teen.  His character in “Take Shelter” experiences some of the same anxieties, which was one of the key elements that drew him to the script.

“How do you keep yourself from going crazy when it’s constantly just, like, waterfalls of anxiety every day?” he said. “It’s a challenge to not go crazy. I defy you to not go crazy  — to just take all of this in and go, ‘Yup, I’m fine. This is fine!’”

He also recounted attending a premiere of “The Great Gatsby” in New York City, only to be introduced  — much to his surprise and chagrin  — to billionaire oil businessman Charles Koch.

“I was like, ‘hurghhhh!’” he said, groaning loudly. “Nice to meet you. Get me out of here.” He added: “Still to this day, I think, ‘I could have strangled him.’ Or at least punched him, or something!” 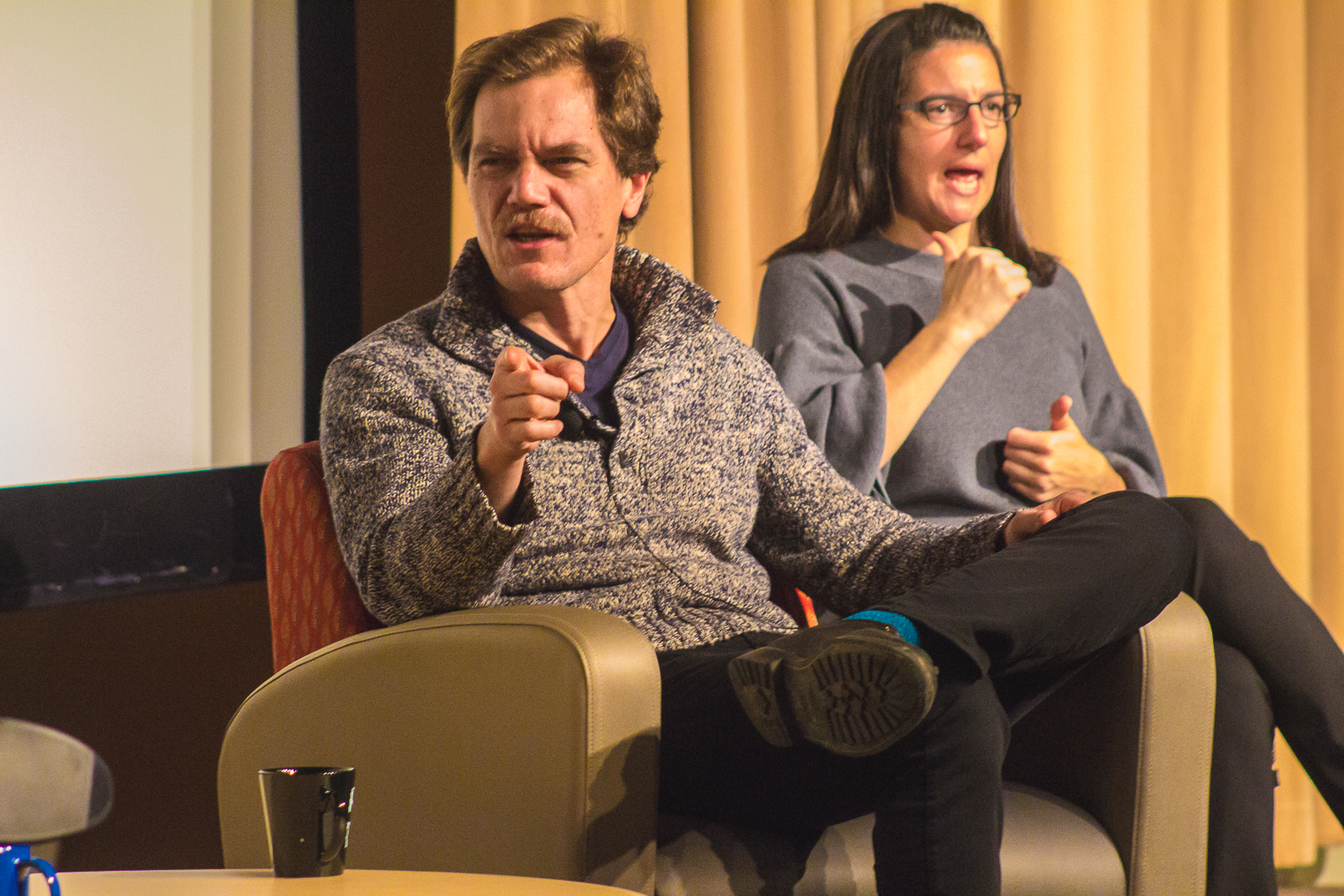 Shannon, who recently directed an adaptation of Henrik Ibsen’s “An Enemy of the People” called “Traitor” at Chicago’s A Red Orchid Theatre, bemoaned the difficulties of directing. Unlike an actor, he said, directors have a unique challenge in fathoming a complete, cohesive vision for the show.

“I don’t recommend it,” he said. “It’s really hard… Because people have to understand you, and you have to make sense. Nothing I say makes any sense, which is why I’m better off being the one reading lines.”

Shannon worked with the “Titanic” actor on the 2008 film “Revolutionary Road,” and said that he “could not be more down-to-Earth.” He described, for instance, a time on set when DiCaprio had to wait nearly an entire day to shoot his close-up in a dinner party scene.

“We did tons of takes on everybody else, and then we finally get to his close-up,” he said. “I bend over, and I’m in his face talking to him, and I drooled out of my mouth onto his crotch area. I finished the take and I’m like, ‘Oh my God Leo, I’m so sorry.’ And he had no idea what I was talking about, so I told him what happened. He was like, ‘Oh yeah, no big deal!’ I felt like I could have punched him in the face and he would have been like, ‘Do you need anything else?’”

On his music and literature preferences

On the meaning of art

An audience member inquired about his philosophy regarding the purpose of art and how it works to elicit emotional responses in people. His response:

“The thing about art is that it’s not a dictatorship, and you can’t control other people’s behavior,” he said. “You can’t control the way that other people think or feel. But you can toss your pebble in the pond and hope that someone else stares at it, and that it makes them think. As an example, some people might watch ‘Take Shelter’ and think it’s the most boring thing ever and turn it off after five minutes. But I have a hunch that some people will get something out of it  — and that’s all you can hope for.”

This post has been updated to reflect the number of attendees at the event.