Master and Form: The Deviancy .. 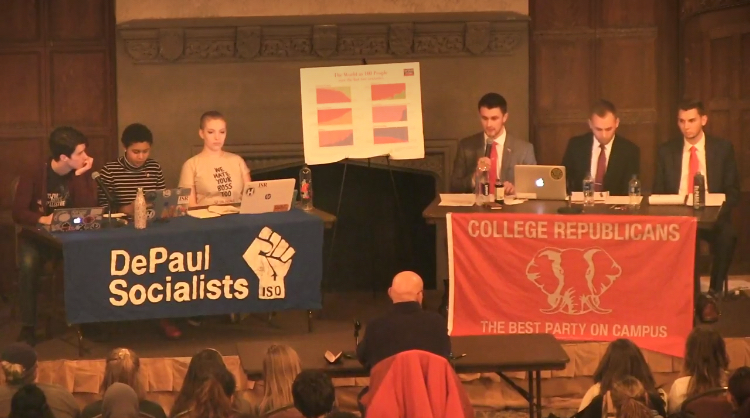 In a recent letter to the editor of The DePaulia, long-time College Republican Brendan Newell attempted to explain a comment he made during the Capitalism vs. Socialism debate in February. In the piece, he claims:  “Neither The DePaulia, Radio DePaul nor any of the other media outlets covering the event attempted any deeper thought on the issue, or show my explanation of the statement.”

The statement in question came after the DePaul Socialists asked how DePaul College Republicans could still support President Trump in the midst of the #MeToo movement. There are, of course, a myriad of ways to respond to this. But Newell’s response immediately struck a raw nerve inside the event and online.

“I would’ve rather had a person who mildly sexually assaulted a woman than another woman who defended her husband after he raped innocent women, ” Newell said, referring to his decision to support Donald Trump over Hillary Clinton in the 2016 presidential election.

I want to be clear about what he exactly said, because I was one of the members of Radio DePaul covering the debate — coverage that Newell has criticized as inadequate. I composed the original tweet quoting him from the @radiodepauldjs Twitter account while we covered the event. I’m also the Secretary for DePaul College Democrats. What I would like to do first is explain the process of reporting on this event for Radio DePaul and then respond to his explanation of the comment.

I have worked with Radio DePaul for the last three years, starting as a news broadcaster, moving up to working as the station’s News Director in between 2016 and 2017 before finally making my way to Radio DePaul’s On-Air Director this past year. Occasionally, I now help with important news coverage like the Capitalism vs. Socialism debate. I was on-scene for the debate running our live-broadcast equipment and sending a feed of the event over our airwaves. Mostly, I informed listeners of who was speaking, but, during moments of silence, I recapped what had happened.

To Newell’s complaint that we didn’t attempt “any deeper thought on the issue,” he’s right: at no point during the broadcast did a Radio DePaul reporter comment on or analyze the content of the debate. As a news broadcast, it wasn’t our job. Our team merely reported what was said and live-tweeted significant quotes with the expectation that debaters themselves would be able to explain what they were trying to say.

One of these significant quotes is the one Newell got flak for. We originally published two tweets: one giving a recap of what happened, and the other with a sloppy paraphrase of Newell’s quote — in quotation marks.

DePaul Republicans say, in response to Socialists impeachment question, they would rather have someone who mildly sexually assaulted women vs. a woman who supported a rapist and received some applause.

The first tweet read: “DePaul College Republicans say, in response to Socialists impeachment question, they would rather have someone who mildly sexually assaulted women vs. a woman who supported a rapist and received some applause.”

The second: “‘[I] would rather have a man who mildly raped a woman vs a woman who supported a rapist.’ -Brendan Newell, DePaul College Republicans on whether he supports impeachment for President Trump.”

*CORRECTION* on QUOTE from DePaul Republican statement on the “Trump Impeachment” during Tuesday’s DEBATE: “I would’ve rather had a person who mildly sexually assaulted a woman than another woman who defended her husband after he raped innocent women”- Brendan Newell

I want to personally take responsibility for this misrepresentation of Newell. I understand just how out-of-control conversations on difficult issues like this can get. I also want to personally apologize to him for any grief anyone has given him due to our tweet.

However, Newell should understand exactly why his comment has become the focus of so much attention and criticism, and why coverage of the debate has highlighted it. When he said it, the room went silent before erupting into a mixture of jeers and cheers. This comment elicited the liveliest audience response of the night and instantly became newsworthy. As someone on a debate stage whose words were being broadcast live, he should have understood that a controversial statement should be precise and not require a subsequent explanatory essay. My job wasn’t to be his press secretary, it was to report what he said.

After we tweeted the quote incorrectly, we were rightly corrected, but perhaps the understanding of our mistake was misattributed.

This is an incorrect quote. I understand DePaul Radio doesn’t like the DePaul College Republican’s politics, but please try to be accurate.

DePaul politics being as they are, I don’t blame DePaul Republicans for feeling our coverage was unfair. But Radio DePaul has always had a wide variety of political content, with shows that represent views from all across the spectrum — conservative views included. Great shows like “Leaning Right,” “The Deep End” and “DePolitics” all tried to create productive conversation across the ideological spectrum between students. Just days after the Capitalism vs Socialism debate, College Republican President John Minster and I went on DePolitics for what I felt was a highly productive discussion on issues like campus free-speech and immigration.

I encourage readers to go back and check other political coverage from Radio DePaul News, such as our Milo Yiannopoulos story, to see strong examples of fair and balanced reporting. I worked as a journalist for Radio DePaul long before I was a member of the DePaul College Democrats. I have always worked hard to make clear where my reporting ends and my opinion begins.

With that clear demarcation, I also want to use this opportunity to address the substance of Newell’s argument since, after all, — he requested productive discussion at the end of his letter to the editor.

After Newell spent about 250 words explaining the complexities of sexual assault to his readership, his argument rests on the idea that “the only legitimate evidence of Donald Trump committing sexual assault at this point, which he has said on tape, is that he has grabbed a woman’s crotch.”

Newell is referring to the now infamous Access Hollywood tape from 2005, in which Trump admits to kissing and groping women (women, plural) without their consent.

“When you’re a star, they let you do it. You can do anything,” he said in conversation with Access Hollywood’s host Billy Bush. “Grab ’em by the pussy.”

On the other hand, Hillary Clinton defended her husband in the 1990s, who as Newell says “has had numerous allegations of sexual assault, all the way up to rape as Juanita Broaddrick has alleged.”

Now, I agree with Newell that sexual assault is a broad term that can encompass anything from an unwanted kiss to the truly horrifying allegations made by Juanita Broaddrick. It’s important to note the differences and nuances, especially in a court of law. But that broadness also serves the purpose of capturing a wide spectrum of behavior that is wildly unacceptable in our society. Any attempt to trivialize a variety of sexual misconduct — which the phrase “mildly sexually assaulted” absolutely does — is beyond dangerous, to say nothing of the fact that the now-President did not just brag about stealing kisses. He bragged about violently grabbing women by their genitals.

What I fundamentally disagree with in Newell’s explanation is his selective omission. President Trump has had serious accusations of violent sexual assault, from a woman alleging she was assaulted by Trump when she was 13-years old in 1994 and filing a lawsuit in 2016, which she dropped due to numerous death threats; to Trump’s first wife, Ivana, accusing him of violent assault in 1989, which included accounts of him ripping out fistfuls of her hair before sexually assaulting her. Both of these cases allege far more than groping. In fact, I imagine Newell would describe these accounts as “raping innocent women.” There are numerous other allegations against Trump — at least 17 made public — and all of them are horrifying to read.

To be clear: I am not a fan of the “whataboutism” that has surrounded the discussion of sexual assault and harassment by those in power, where partisans stand firmly by their allies while pointing fingers at their opponents across the aisle. I firmly believe we should apply the same standards to Bill Clinton as we do to Roy Moore, Harvey Weinstein and John Conyers Jr.

Newell’s letter is humbly titled, “An appeal to logic and reason.” If Bill Clinton’s accusations are damning but President Trump’s are not, there is clearly some missing logic here. If one alleged perpetrator of sexual assault is guiltier or morally worse than the other in this case, Newell fails to explain why.

Indeed, I have no doubt that many liberals would revile someone today for the denigration of alleged victims, as Hillary Clinton did in the 1990s. But other than citing this as a “gut call,” Newell’s letter gives no compelling explanation for Hillary’s defense of Bill being substantially worse than (or even comparable to) the heinous acts Trump is accused of. Has he not denigrated his accusers the same way? Is the only difference here whether the candidate had an “R” or a “D” next to their names? Based off Newell’s “logic and reason,” I’m inclined to believe that’s the case.

Let me be clear — I firmly believe that the Democratic Party, the Republican Party and a multitude of industries and communities in America need to take a long and hard look at what they have allowed to be perpetuated. I think the Democratic Party has begun a good faith effort to clean house, trying to give Americans leaders that they can be proud of. I implore our colleagues across the aisle to do their best to learn from the failures of supporting people like Roy Moore, and try to do the same. We would all be better for it.

I stand by Radio DePaul’s reporting on the Capitalism vs. Socialism Debate — it was good coverage. No journalist takes joy in issuing retractions and corrections, but they are essential nonetheless. When a mistake is made, you own up to it. I have consistently endeavored to create a strong separation between my political views and my reporting out of an unyielding respect to the hard and honest work of journalists. As such, let me assure you, this was not a mistake borne of partisan derision.

The conversation surrounding the #MeToo movement has been a long time coming, and I welcome further discussion. I hope Newell and other diverse voices continue to be a part of it as we work to elevate those that have been taken advantage of by people in power. A level playing field is required to do them justice, whether they’re in the White House, Congress, Hollywood, or even on-campus at DePaul.

I take full responsibility for my editorial mistake and plan on learning from it. When you say something controversial, people will pay close attention to those words – especially in a public forum. What you say should be well-crafted and thoughtful. I strongly encourage Newell to use this as an opportunity for a similar learning experience.