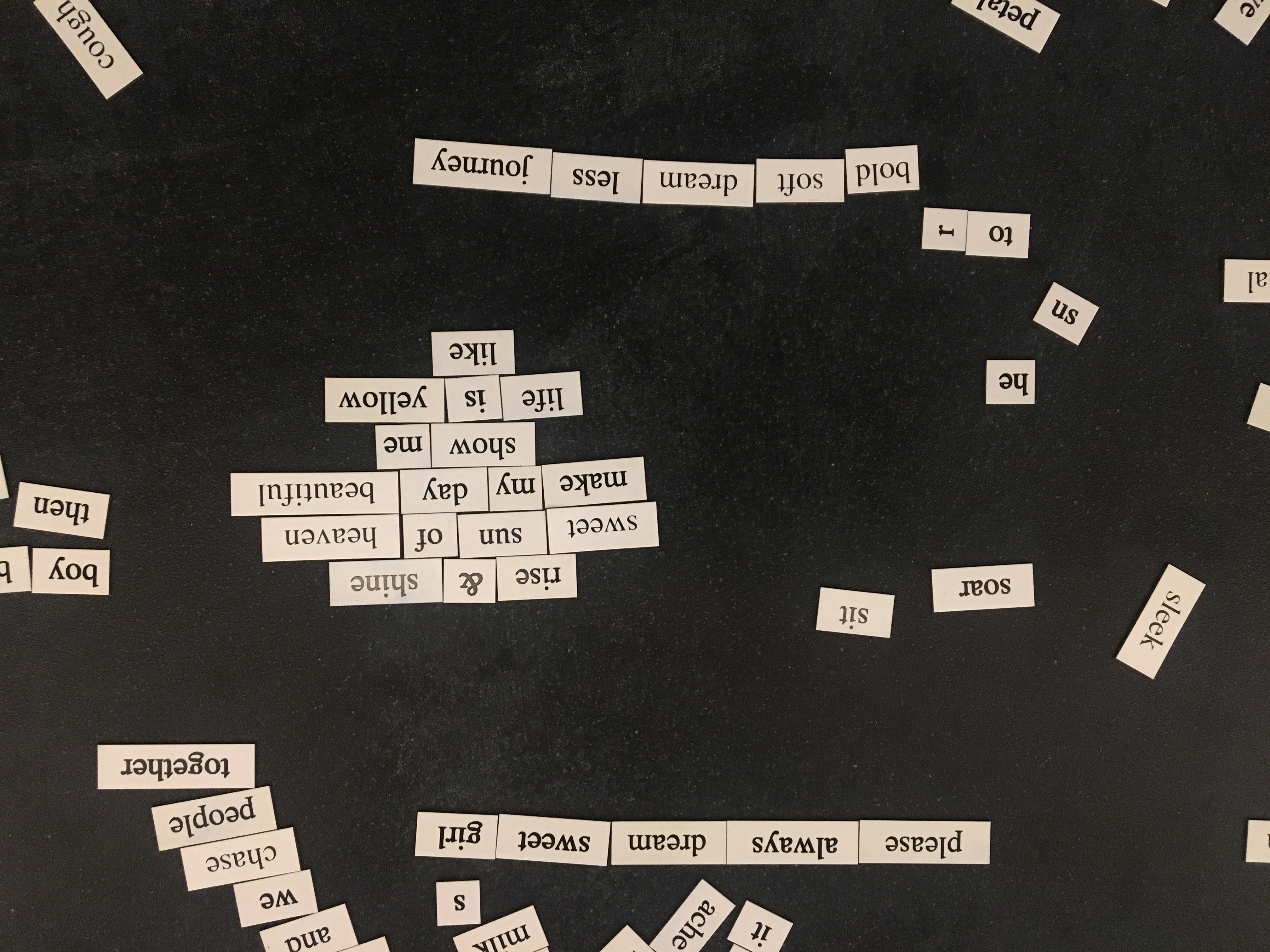 On Tuesday evenings, the DePaul POETS gather in DePaul University’s Lincoln Park Student Center. Founded in 2010, the student organization creates a community, both at DePaul and in Chicago, for poets to come together to write and share poetry. DePaul POETS’ meetings are held as workshops and led by a different member each time, prompting poem ideas and facilitating writing exercises.

Meetings aren’t the only times the members write poetry. BE Jimenez, DePaul POETS treasurer, will think of lines while he walks to class or rides the CTA. Katriel Hampton-King, president of the DePaul POETS, writes on the weekends, typically composing multiple drafts before he is happy.  Daniel Brown says he writes poetry in his bedroom and in his bathroom. He carries his spiral poetry notebook, now flimsy and covered in scribbles, wherever he goes. He needs to get a new one, he says. But for now, what he has works.

For all three of the poets, poetry is, simply and obviously, personal to them. While the art is for them, their own expression and their own emotional digestion, it is also for those reading their poetry or listening to their performances.

“The purpose that poetry has in my life is to share a message. I always want to basically share a message that people can relate to, help them out with their day in any way possible,” said Hampton. “I just write because I want my poetry to affect someone in some way where they can say like, ‘hey, I’m struggling with this too, and I just want to thank you for the piece that you shared with me because it is really uplifting for me.’” 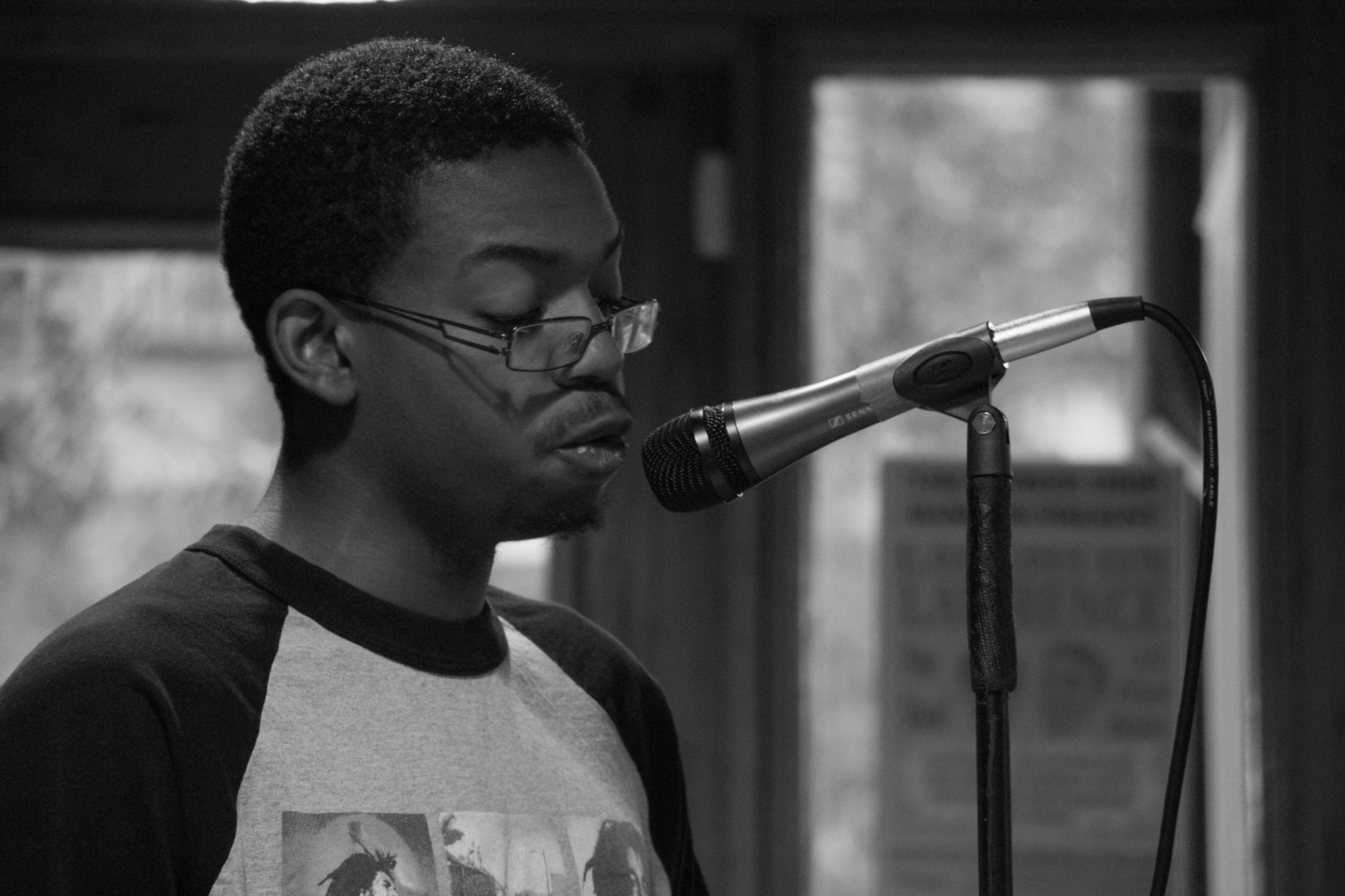 Ten seconds remain
for us to win the game.
Our destination is the end zone,
which is 3,000 miles away.
My heart rate is at
599 beats per minute.
The crowd’s
silence does not
calm my shaking limbs. Their hands
squeezing their heads or clutching their knees
they know it all depends on this one play.
My teammates all adorn smiles,
but I can see them
masking their grimaces.
The energy in this huddle
is so low. Yet
my quarterback says
“Try to get as deep as you can”
and at the snap my feet kissed the land.
Each fan in attendance
stop looking up to the sky
and look at the field.
Seven seconds remain
til the game is over. My quarterback is
seems ready to fling it.
I’m not quite open and
the defenders seem too interested in me.
Surely there are other guys.
The quarterback slings it anyway
with a mixture of muscle and faith.
Calculate the angle. Time the Arc.
Time the Jump. Just
Don’t drop the ball. Drop it
Super Bowl dreams are over.
Early retirement is my next option.
Maybe I’m not quite cut out for the NFL.
Hurried footsteps
of defenders. Football
is getting closer to me.
I manage
to jump over defenders.
The ball hits my hands.
Missed tackle.
Clear pathway.
My feet are pounding.
The stadium’s pounding.
Fans at home are pounding.
Destination reached.
Zero seconds remain.
Guess you can call that the game winner.

“No matter what with poetry I think for me it’s about communicating truths—making the poems substantive enough or crafting imagery or literary devices so that they can really see what these truths are, you know?” Daniel said. “It’s all about image and perspective and how you craft that image so they can get the right perspective of what you are trying to communicate through a poem. Like about love, about hate, about anger and what it does to somebody.”

My Terror is Failure

I can never shake you,
Instead you shake me.

To sway me into your dark duress
Crunch the core of my existence, my heart,
Into mottled muscle and red flesh.

Now my spirit flatlined and bleeding
I know I’ll revive, resuscitate in time.
You’re an ideological phantasm, a ghost.
The darkness to my shade.
You can never attack my physical but bit by bit
You dismantle my heart and leave my spirit
crazed.

Knowing the same song will repeat.
You aim to have my heart in your clutches again,
Maybe this time you’ll get to
Devour and eat.
Your feast,
my heart.
And this time it might not start.

We’ve been at war as long as I remember.
Every time I survive,
I try to rub away the red that dims my arms and legs
since the last time I died.

Snooping, Slithering, Seeking to take me out.
My terror in every route.
My fear is that when I die of stress.
From my loss in your relentless conquest,
That when your eyes crinkle in delight of the sight of my heart crumbs.
I fear that at the last lick of your finger my body will go numb.
And I’ll manifest into what I fed into.
Another looming shade, brother, another you.

I know we need that scholarship pay.

I know you and pops work to keep me and my sister alive,

life into a hard, grinded coffee bean bitter than

Take you and the family far,

from where we are.

You and Pops see me as an international businessman, corporate meetings

a black man of a high pristine prestige.

I Promise Momma, I’ll try to watch my mouth

and watch my tone.

I know corporate colloquial is not the same city slang,

that resonates with pangs of a hood twang.

at the right time.

or jeans with holes

You had to say that because you know I like those.

I Promise Momma, I understand the importance of impressions.

Leave a finger line imprint in a firm hand grip.

Gentle greeting, teeth white smiling instead of that

you used to warn me of timeouts and belt hits.

I Promise Momma, there will be no baby momma drama.

You say I search for “flashy fast girls”,

who give birth and press for a Gucci purse.

I protest, just looking for a down chick that knows me best.

You deduce it as a lie

Say they just bird brains looking for a place just to lay their eggs in a nest.

I Promise Momma, if I run into the cops I’ll oblige

Not get popped, at a traffic stop.

In the way a put put putters out,

out of breath he utters.

As another cop puts a black man to death.

Which I did when cops pulled up in the parking lot,

As they had to escort the

I Promise Momma, I’ll watch how I protest.

I’m a loving son and a big brother.

I know you don’t want me to be another black brother dead,

I Promise Momma, I’ll be safe at parties

No Fighting, No Hood Beef, No Doing Cracked Up Drugs.

That have taken away, or led a stray, your brothers and uncles you loved.

I Promise Momma, I’ll stay safe in the streets.

I’ll stick to the clues,

because I know people aim to make you bleed red

out the mother f—in  blue.

I ain’t even trynna explain how they totin’ guns,

Just Reppin where they from,

And she ain’t tryin to hear none.

Pop’s told me, see how America got black moms in a worry

Chicago is another city that’s dirty.

Remember your promise to your mother

when you be out in a hurry.

I know you f—s with your people,

I know you want change,

you want to help wherever there is depression

But people are gritty,

based on how institutionalized racism built the neighborhoods

And sometimes all n— want to do is see you bleed.

But keep your promise to your Momma.

And for me—just make me proud.

“Poetry has a musical purpose, an intellectual purpose and is something that — I want to write poetry that impresses people and that they actually respond to. Like if I do a poem and all the audience claps but don’t no one say anything to me afterwards, I don’t think it was that good of a poem because they’re just clapping to be nice. But stuff where people be like ‘Yo— ’not just that they liked it, too — But when they’re like, ‘Yo, this specific line you said, these specific words you said.’ I want people to say that to me.” 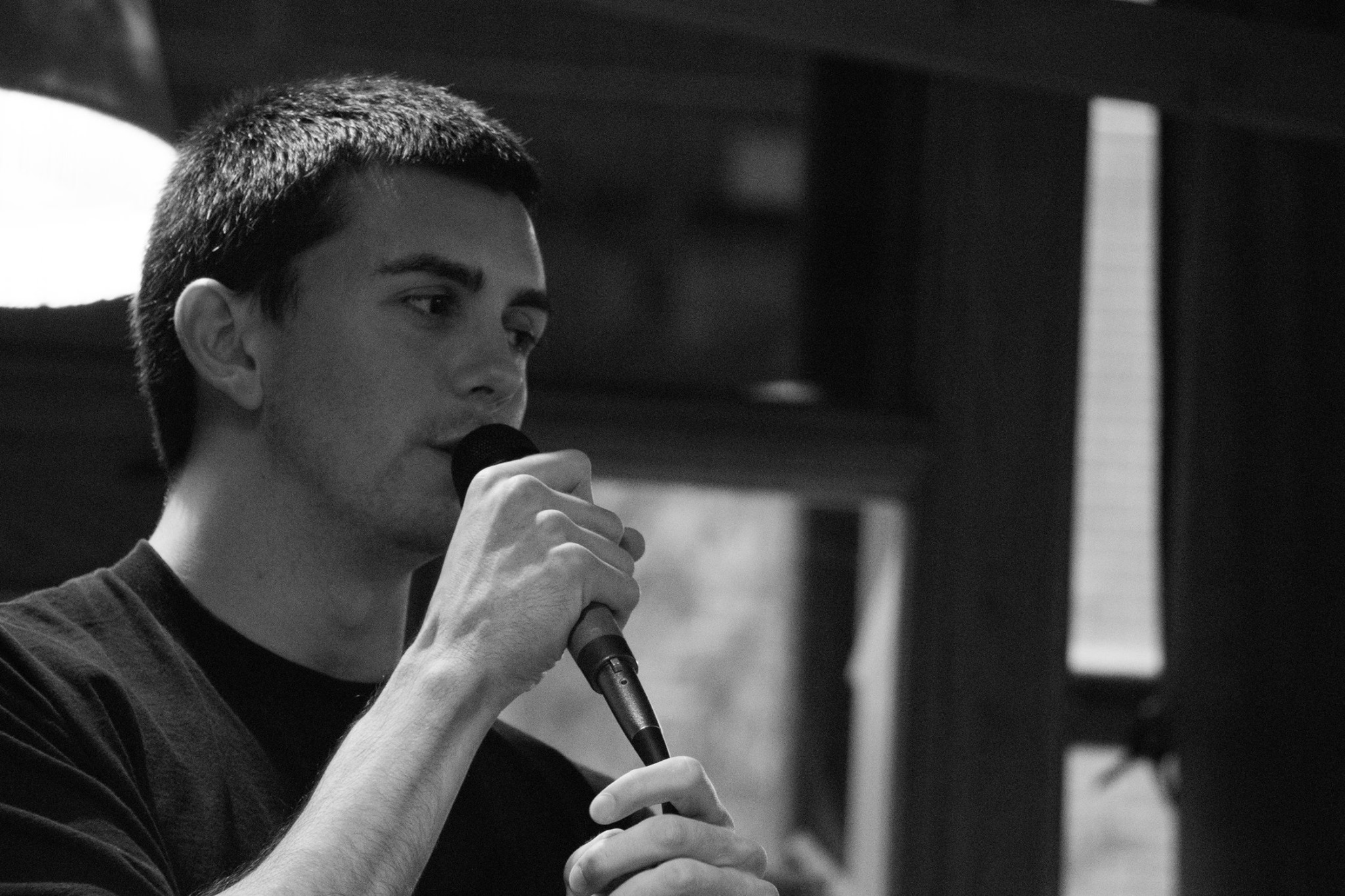 Hate me cause you’re right

Hate me cause I’m white

Hate me cause I’m black

Asian Hispanic and all that

But not cause how I act

Hate me based off false facts

Hate me nowadays for no reason

Except the language that I’m speaking

Since it’s hatred you believe in

Hate me cause I’m straight

Hate me cause I’m gay bi or trans

Hate me cause you can

I know you do not wanna understand

But be aware cause karma travels in u-turns

So rest assure if hatin and it only helps you

Then you prolly just hatin cause you hate yourself too