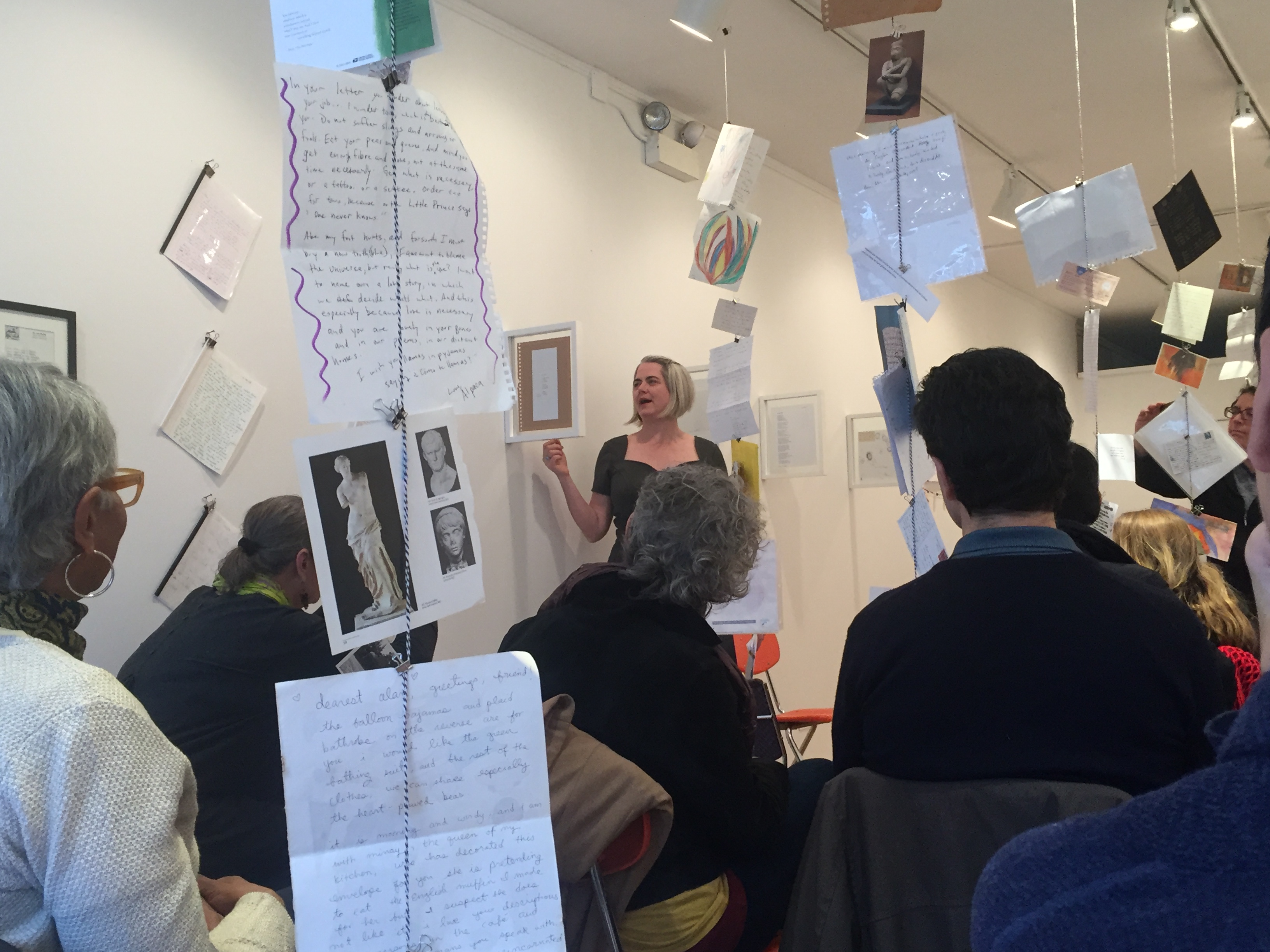 On an uncharacteristically rainy and cold April afternoon, Abe Louise Young stood in the Evanston gallery Space 900, gripping stacks of paperclipped letters. She was surrounded by guests, but also more letters  — tacked to the walls, framed, strung with hanging twine like a letter ladder. They were written on receipts, postcards, greeting cards, and typewriters. Some talked of gardening, others poetry books, some spoke of relationships and some included stick figure illustrations.

They were all part of the touring exhibition Poet to Poet: Living Letters, a 13-year correspondence between poet Abe Louise Young and poet Alan Shefsky. Their friendship was preserved in loose leaf papers of written word before Shefsky died from a brain tumor.

In 1999, Young applied to Northwestern’s graduate program for performance studies. Shefsky, the department assistant at the time, opened her application. He wrote back, asking to be pen pals, to which  — after a phone call for vetting purposes — Young agreed.

Even with the rise of instant messaging, the two made sure to keep the dying art form alive. Young saved her letters in cardboard boxes and plastic tubes.

“There’s nothing like writing a letter by hand,” said Young. “It takes time and you put your dna into the paper. It’s more akin to making art.”

In 2011, Shefsky was diagnosed with brain cancer. The two continued to correspond, even after Shefsky could no longer read and write. During this time, she saved the letters she had written to him, completing their two-way collection. One of Young’s favorite letters came a week after Shefsky had passed, a letter of swirls and shapes his sister had found and forwarded.

The culmination of their collection became a travelling art exhibition on display in Austin, Smith College in Northampton, Massachusetts, and most recently Space 900 for an extended weekend stay, from April 13 to 17. While perusing the exhibition, visitors are also welcome to write their own letters to loved ones, past loves or even themselves, to send or not to send.

“Letters are very intimate,” said Young. “Handwriting is like looking at a face or holding someone’s hand.” 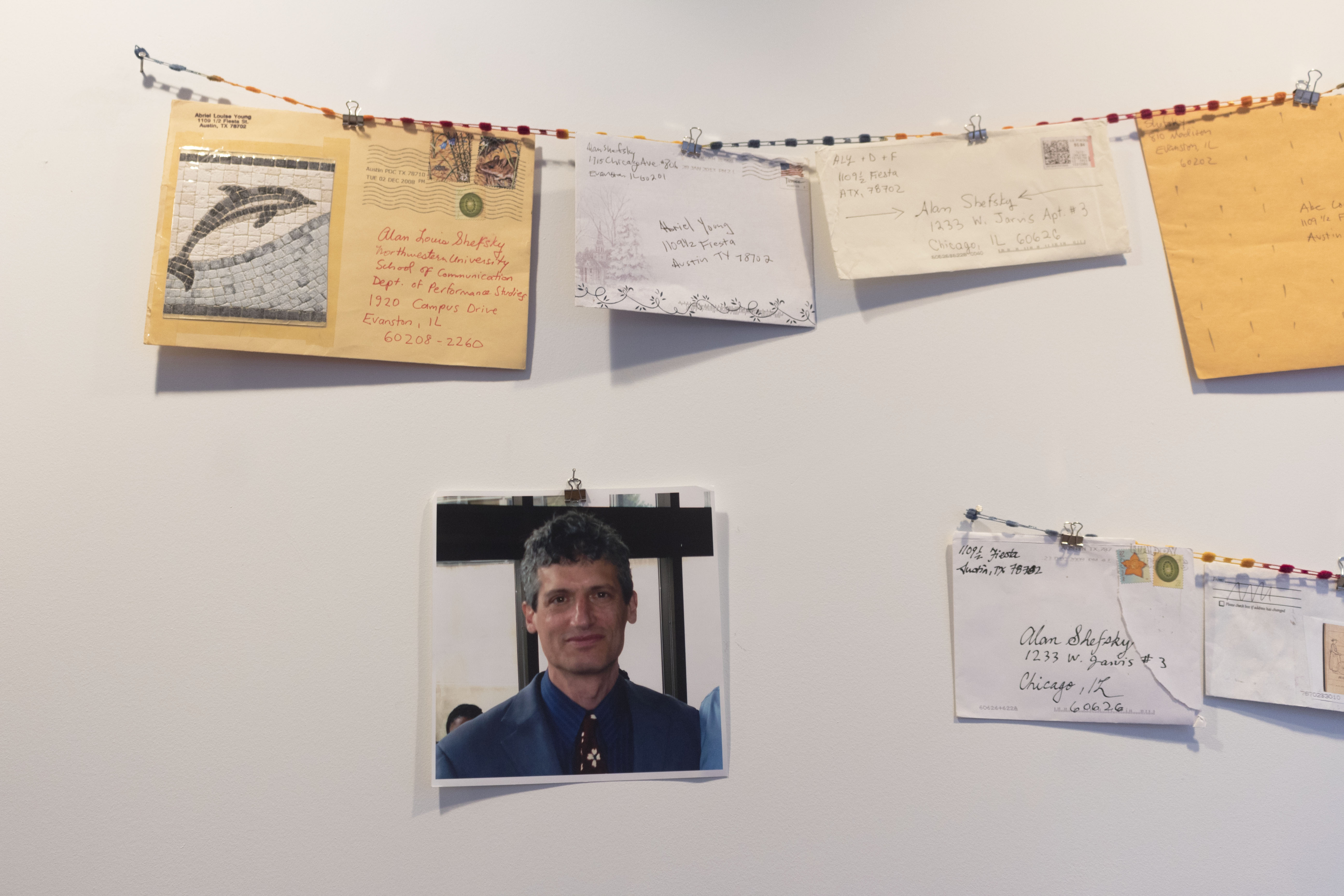 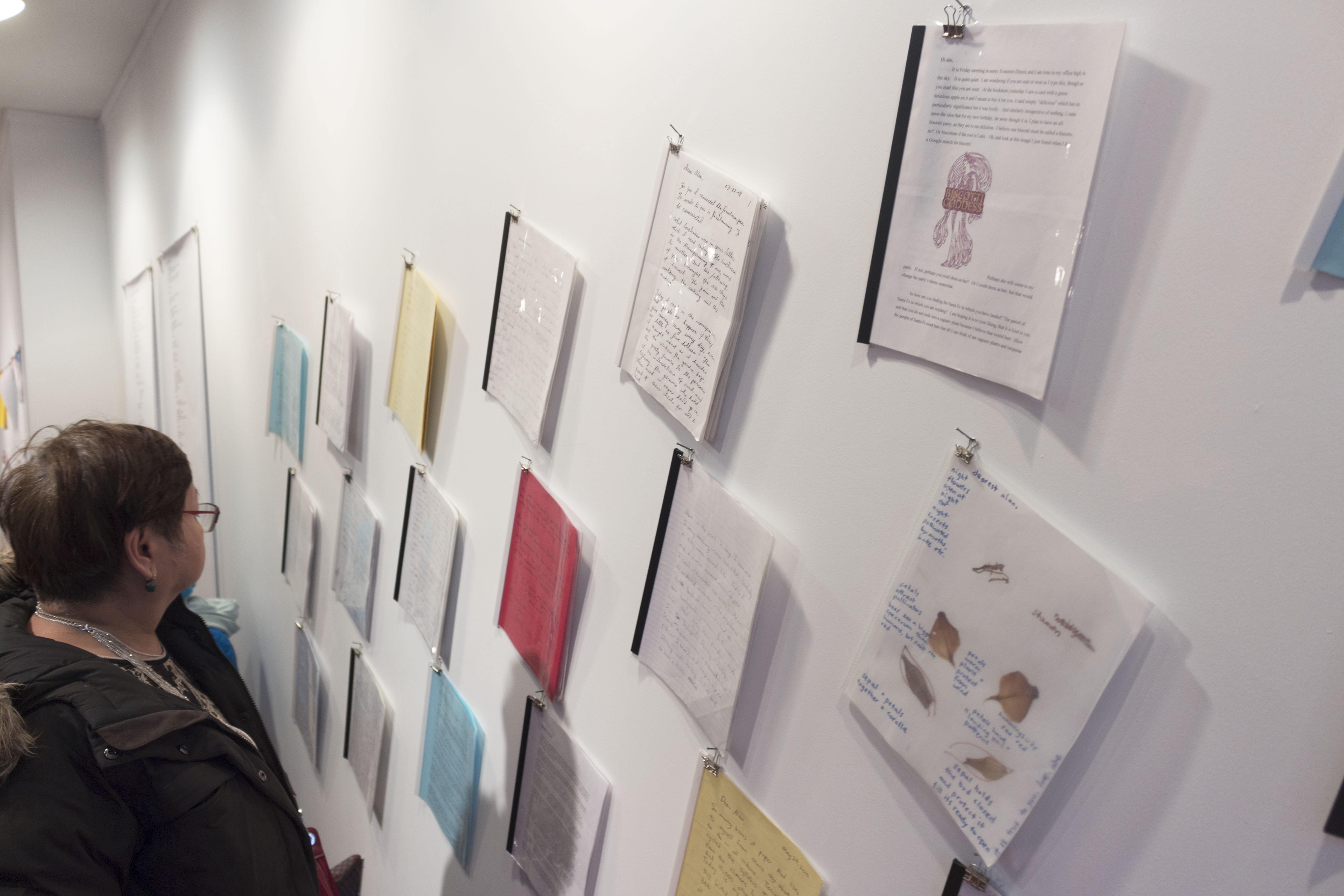 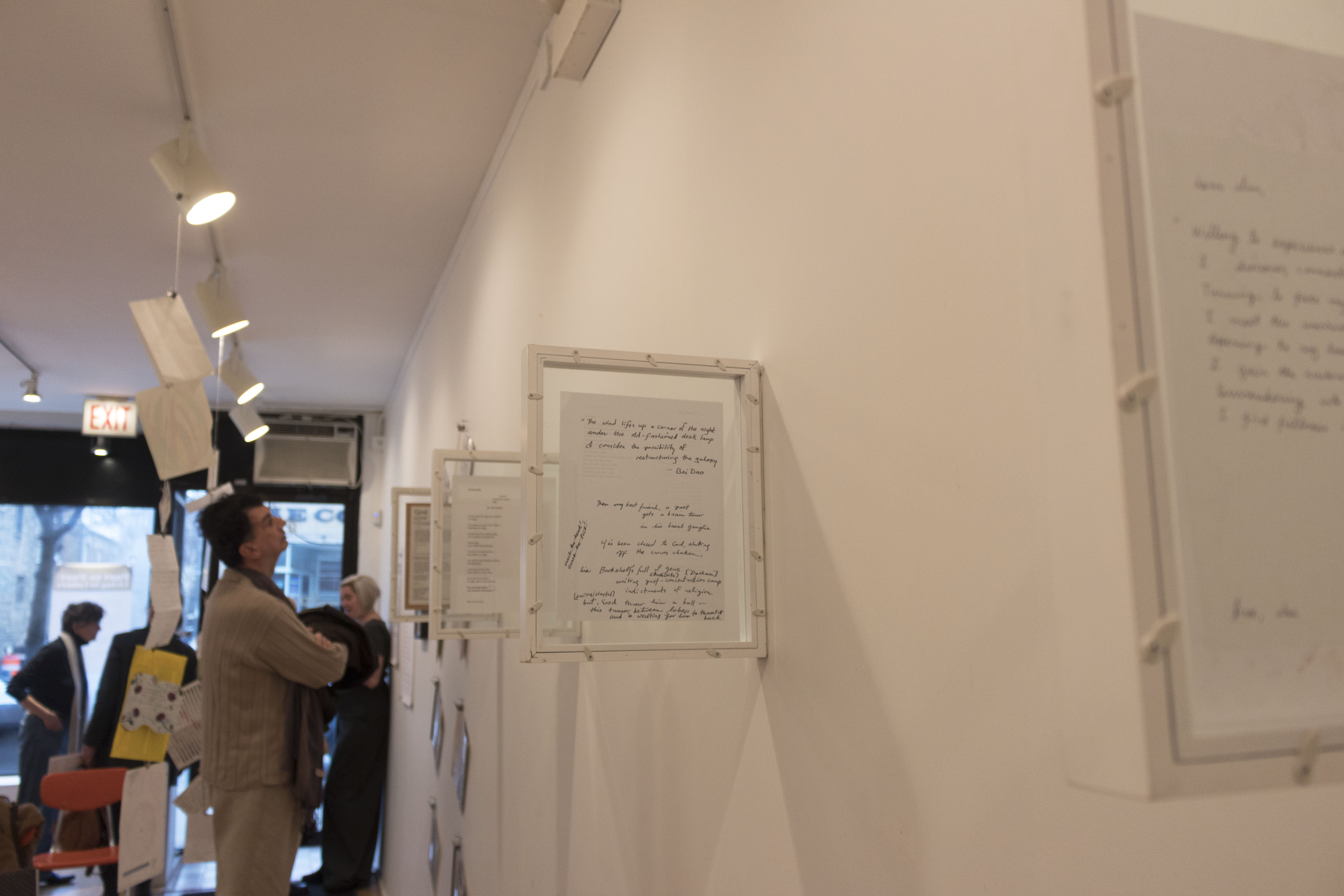 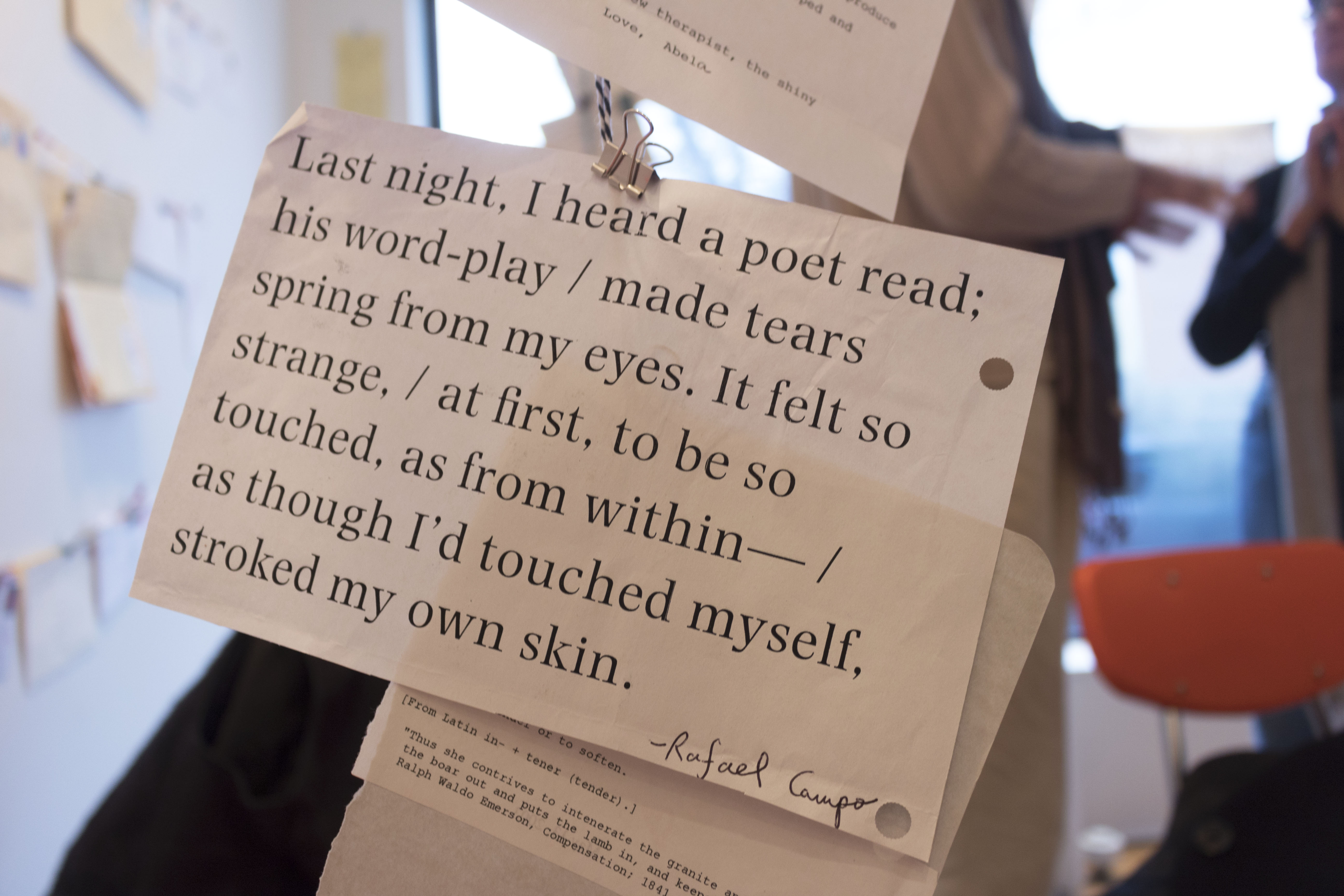 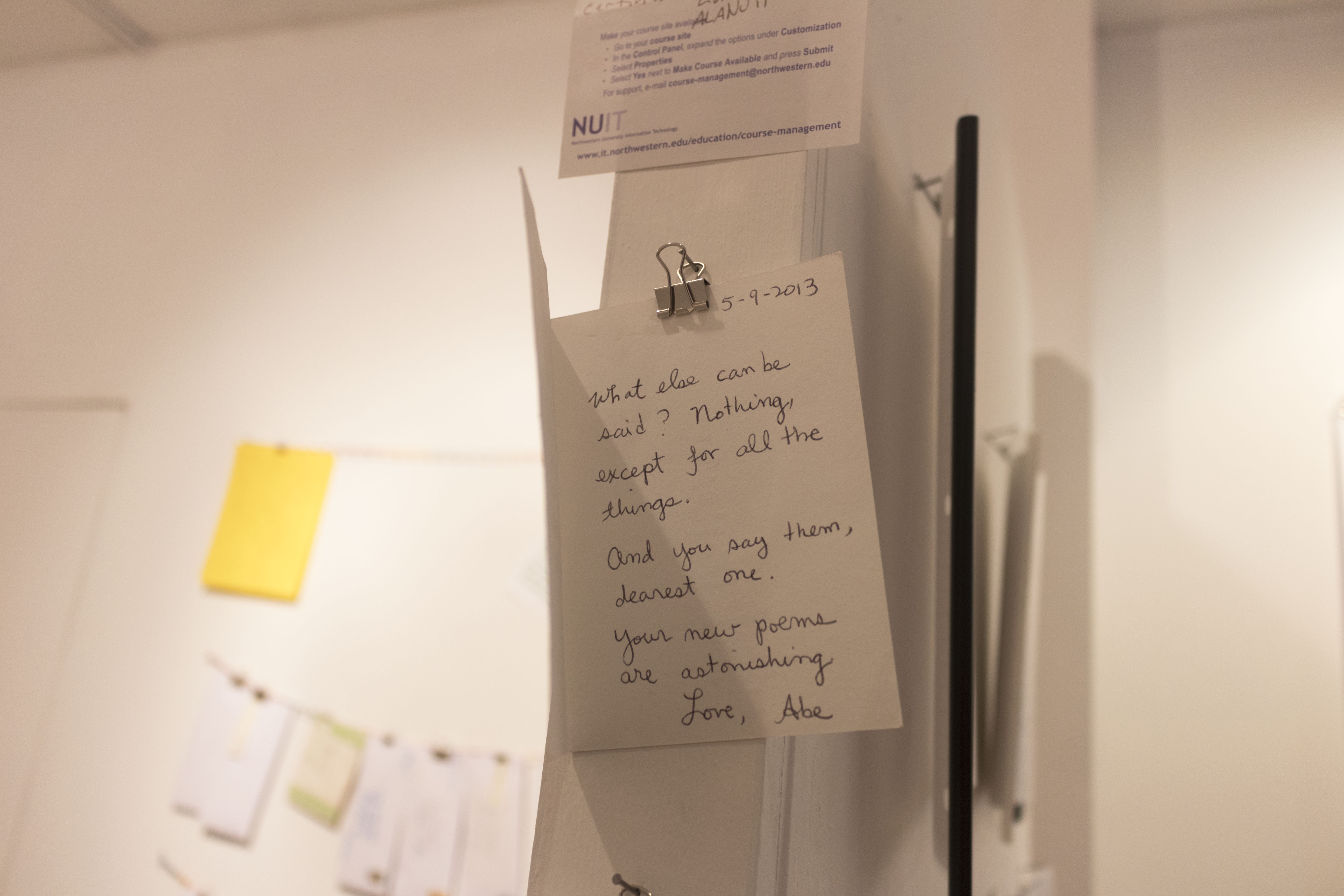 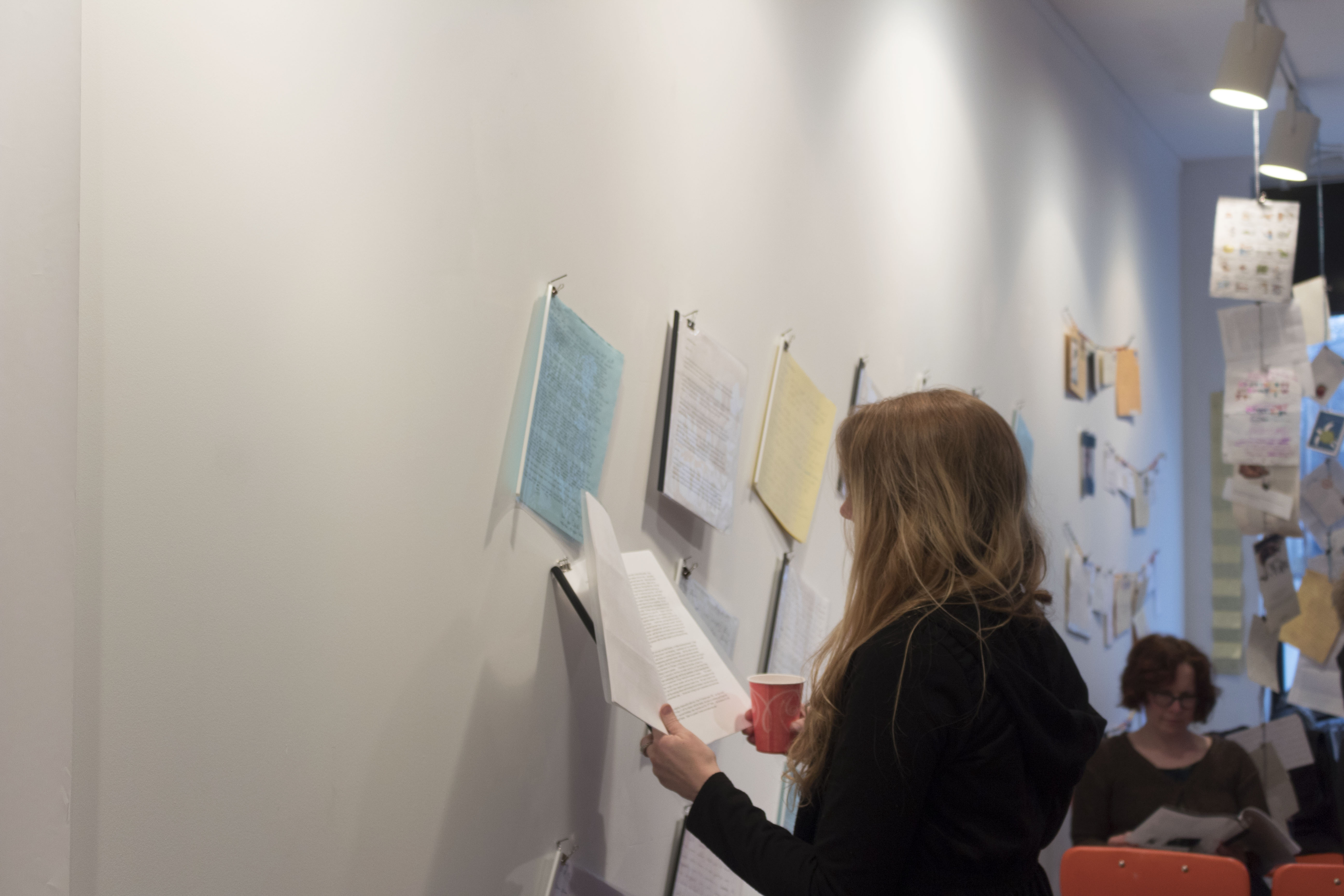 Poet to Poet: Living Letters was on display at Space 900 in Evanston, Illinois. (Madeline Happold, 14 East)

On that Saturday afternoon, Young hosted a reading of some of their letters, along with each of their personal poetry. The location was particularly touching — Evanston was Shefsky’s home, where he worked in the performance studies department at Northwestern University and was close to family.

While Young was first setting up the exhibition, she noticed a man at the window. She tried to communicate through the glass window front that she was busy, but she could see him mouthing words. Alan Shefsky, Alan Shefsky, he repeated. They chatted, and he told her that he had gone to high school with Alan. He made a slam poem about their mutual friend, and performed it on the spot.

After readings, audience members would interject with personal anecdotes of Shefsky  — his love of Emily Dickinson, his joke of being a “poet in residence on the El,” his work at Northwestern, his search for spirituality in the face of mortality.

Young’s poem about their friendship, “Poem to a Friend Growing Lighter and Lighter,” was featured in the Bellevue Review literary magazine and was the recipient of the 2017 Marika and Jan Vilcek Prize in poetry. She ruminates on their friendship and his death, weaving excerpts from their letters: Oh yes, my friend, I do commit to you entirely,/to the best of my ability,/within the limits of our mutual fragility.

Once Young has finished reading  — also accompanied by readings from Shefsky’s nephew and brother, Jay Shefsky  — she invites visitors to “turn to [their] neighbors and share their stories of [Shefsky].” Guests hug, laugh and exchange stories, flipping through the paper trails.

There is a timelessness to both poetry and friendship.

Corrections: An earlier version of this article incorrectly said that Shefsky was a professor at Northwestern. The paragraph of the poem made by Shefsky’s fellow classmate has also been revised for clarification.