DePaul Alums Compete with ParaCheer Team USA at Wo... 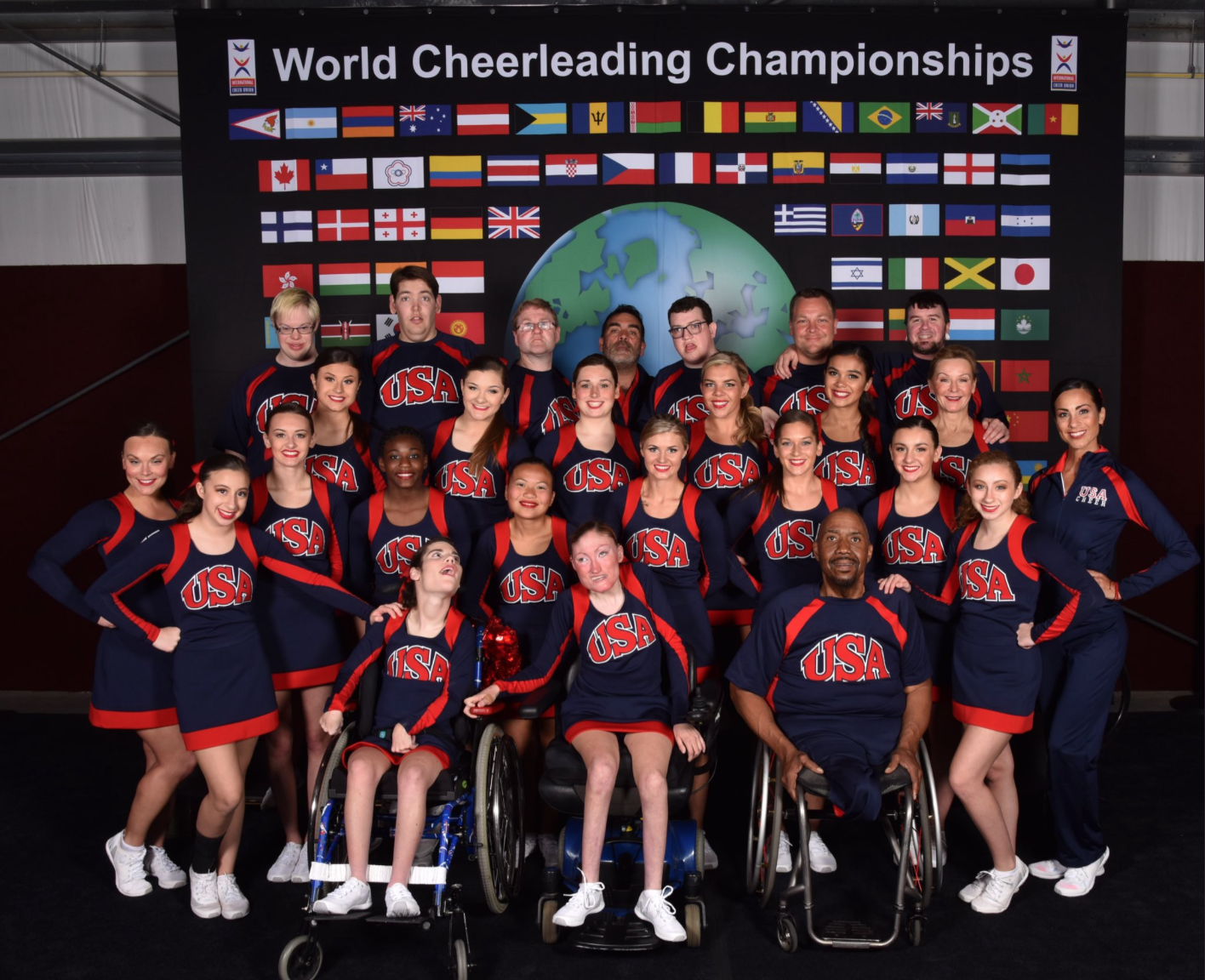 Cheerleading, by nature, pushes boundaries and questions limitations. From a young age,  cheerleaders learn to ignore their inhibitions, tossing their teammates into the air and tumbling across the mat. Eager to learn a new stunt, cheer teams are unfazed by ambiguity — how might something work? They try it to find out.

Inherently taxing on the body, cheerleading might not appear possible for everyone. But  cheerleaders, with and without limitations, competed on April 26 at the International Cheer Union (ICU) World Championships in Disney World, Florida, in the ParaCheer Unified Division.

The division is young, only in its second year, and had two competitors: Team England, which took home gold, and Team USA, which took home silver. DePaul University’s  Shanon Lersch, the school’s spirit director, and former cheer coach Lee Trudell led Team USA, and three of the team’s athletes were DePaul cheerleaders as undergraduates.

ParaCheer brings two kinds of athletes together: those with disabilities — or “with limitations,” according to Team USA — and those without. , The competition requires 25 percent of team members to have a disability. Team USA had 24 athletes, 13 of whom have limitations.

“We really pushed the envelope to see how far we can take this and also showcase that there really are no limits,” Lersch said. “Every type of person can have this type of experience.”

A cheer team usually spends several months preparing for a competition, choreographing a routine and perfecting technique. Team USA had just under two months to prepare for Worlds. Midway through February, ICU — the international governing body of cheerleading — asked Trudell and Lersch if they would coach the first USA team. Without hesitation they agreed, quickly forming a team of athletes from Illinois, Indiana and Wisconsin.

In addition to the tight time frame, the team couldn’t meet as frequently as a typical team might because of the distance between athletes. With members across the Midwest, Lersch and Trudell were intentional about where and when they practiced. The coaches ensured the team fit in at least one practice in week, typically on Saturdays, and alternated between gyms in all three states to balance the commute for athletes.

On top of that, Team USA pulled a routine together without an official training manual, modifying stunts and adjusting the routine themselves. Choreography was a lot of “trial and error,” Lersch said.

“The adaptations that we had to make came from practice,” Lersch said. “We want this type of an inversion  — how can we make it happen and how can we utilize our athletes with limitations to make it happen. Everyone came into this team with an open mind and allowed us to be creative and never thought, ‘Oh my gosh we can’t do that,’ or, ‘That’s not something we can try.’”

While choreographing the routine, Lersch said the team took time to think about what they wanted to do and how they could make it happen. Sometimes this meant an additional back spot for an upside-down stunt  and other times it meant modifying an entry into the stunt itself. During the routine, athletes in wheelchairs lifted cheerleaders either at knee or chest level with their hands.

Steven Heyer, an athlete on Team USA, loves being on stage. He is involved in Adaptive Community Approach Program (ACAP) PlayMakers in Waukesha, acting in the previous 18 plays the organization has put on. Heyer has a mitochondrial disorder, causing seizures, mild cerebral palsy, cognitive delays and a speech impairment. His theatre director asked if he wanted to join ParaCheer Team USA. He was immediately interested. Heyer loved practicing with his team, which he grew close to, and he looked forward to going every week.

Wendy Heyer, Heyer’s mom, said the ParaCheer team was a “common ground,” offering a space to bring athletes with and without limitations together.

“Our family has been living in the world of disabilities for the last 28 years,” Wendy Heyer, Heyer’s mom said. “We know how genuine and open-hearted Steven and his posse can be.  Watching our new friends, the young cheerleaders, discover the beauty of Steven’s community was inspiring.”

Pamela Nehrke, a DePaul Cheer alumna and Team USA athlete, says she savored the time she spent on the team. Prior to joining Team USA, she hadn’t spent much time with people with limitations. Having cheered throughout high school and college, she knew the drill and enjoyed watching other athletes experience the excitement for the first time.

“A lot of these athletes have never cheered before at all,” Nehrke said. “So it was like teaching the guys in wheelchairs, ‘When you’re just sitting in your chair waiting for the tumbling to end get those hands up, spin that chair around.’”

Team England competed in the first ParaCheer Unified Division competition in 2017, though its inception was eight years earlier. In 2008, United Kingdom-based competitive cheerleader Rick Rodgers was in an accident that affected his nervous system and now uses a wheelchair. A year later, Rodgers resumed stunting, eventually performing at the ICU World Cheerleading Championships and working with the international organization to develop a competitive division for athletes with limitations. Rodgers founded ParaCheer International to bring ParaCheer to ICU and the rest of the world. Rodgers estimated that there are now over a dozen registered  ParaCheer teams across the world, including a team in Germany, Wales and now the US.

“Cheerleading as a sport and cheerleaders as a group are already very inclusive,” Rodgers said. “All it took was for someone to show them how they could make it work for people with physical and sensory disabilities — to pick it up and start building teams for those people who couldn’t access the sport before.”

The current international scoring system isn’t made to fit the needs and modifications of ParaCheer. Rodgers said he, along with others at ParaCheer International, are building better evaluation guidelines for the division to make it more inclusive. Once more ParaCheer teams are formed, Rodgers hopes to open it to all levels, from beginners to elites.

Steven Heyer told his mom his favorite part of competing with Team USA was the selfies he took with his team and other cheerleaders.

Wendy Heyer remembers walking around Disney World the day of the competition and noticing her son was missing. Looking ahead to see where Steven had gone, she saw him and his friend taking a selfie with two cheerleaders from Italy.

Correction: An earlier version of this story mislabeled the division in which ParaCheer competes: it should have been titled, “ParaCheer Unified Division.” It has since been updated.