A Million A Post: A Social Media Analysis on Kylie...

A Million A Post: A Social Media Analysis on Kylie Jenner 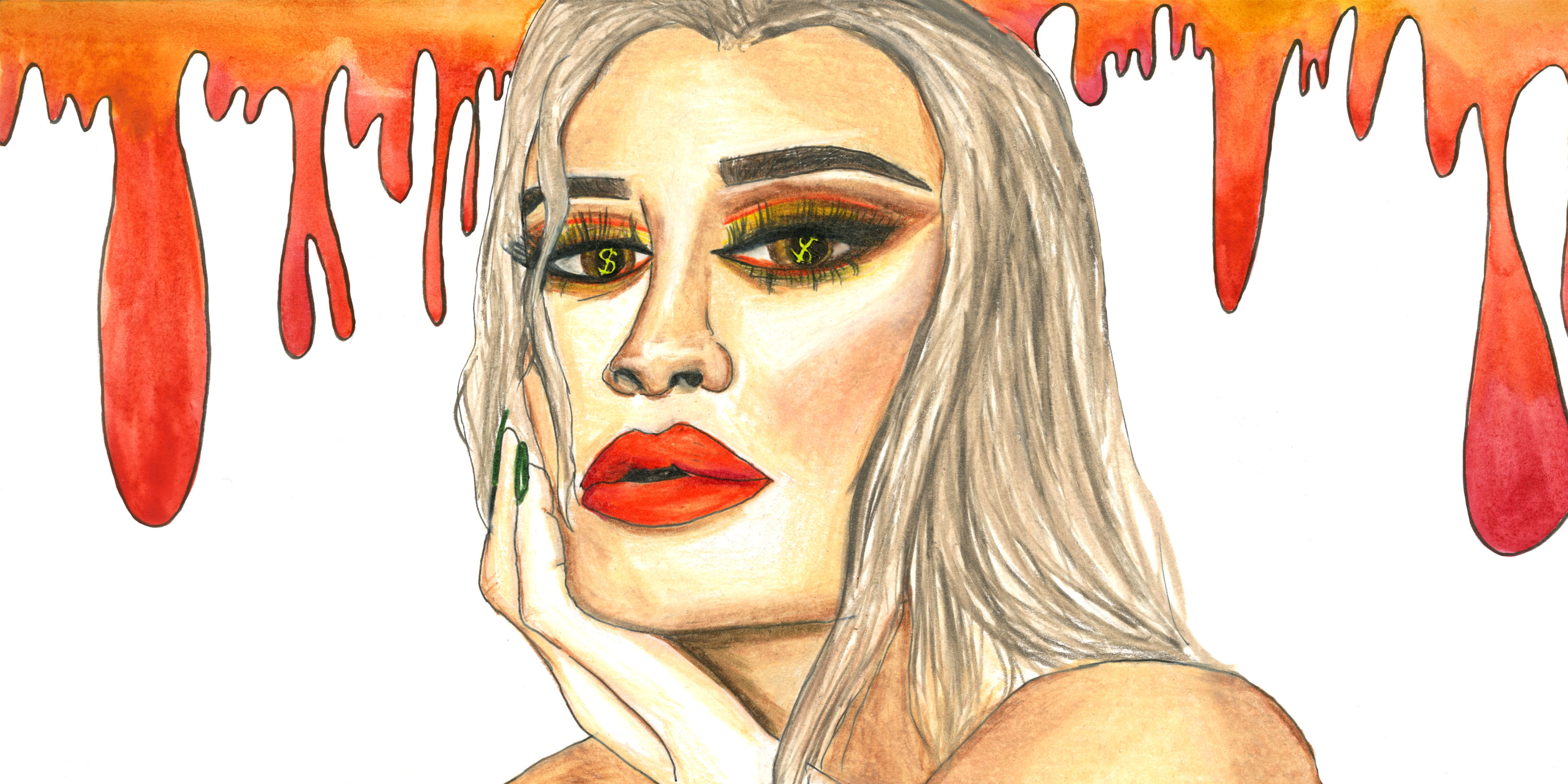 Although she may be perceived as an extension of the very famously known Kardashian/Jenner family and media money conglomerate, Kylie Jenner of Kylie Cosmetics is an independent self-enterpriser. Kylie’s entrepreneur model is based around one central idea: the young mogul’s individual fame for her higher standard of luxury. Kylie has accomplished showcasing the notoriety of her life to the world, from the boom that is social media and the anchoring role it plays in society today.

Incorporating the masses’ adoption to the use of social media, she has set the precedent for using certain online platforms such as Instagram, Snapchat and Twitter to give her followers access to her life, which is now her business and success. The success of her business is solely due to the way it has been set up: her action is the product, the impressionable youth is the consumer and social media is the medium. With over 17.7 million followers on Instagram, Kylie Cosmetics has established an authoritative example in the world for everything involving luxury that is an achievable by-product. Kylie Cosmetics has become the front-runner in the realm of successful public relations (PR) tactics, by the use of numerous strategic forms of social media presence which include selling herself as the brand, promotional sales and transparency.

Firstly I would like to talk about Kylie selling herself as her brand and the success this has had on the take-off of her business. Although Kylie Cosmetics and Kylie Jenner are two different entities, Kylie’s business model has been created to make her life and persona the central vision of the brand. What Kylie Jenner has done is created this idea of a perfect life, filled with luxury and happiness, achievable by imitation. With the use of her personal follower count of over 116 million and the Kylie Cosmetics account following, the owner of the company covers a lot of ground by just living her life day by day. Jenner advertises Kylie Cosmetics on her personal account, covering 116 million people interested in her life to be extremely aware of her business and the hype that comes along with owning her products. This business model has created a necessity for a new and improved standard of life that she makes possible by being able to shop for her products. By showing the world her life that appears so flawless on Instagram and Facebook apps, Jenner has targeted an audience which is made up of impressionable youth. The reputation she carries for herself as someone who has it all gains her a lot of followers worldwide. This spreads her popularity and increases the brand’s name. The empire she has built for herself is based on the popularity and controversy over her lips and her fan worship. These key components and strategies play the largest role in the company’s impressive net worth, just 100 million shy of a billion dollars. 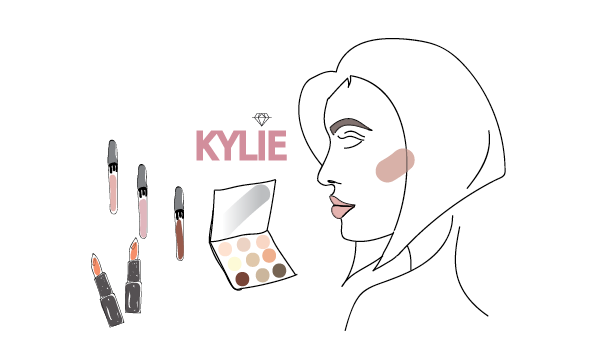 Another brilliant PR strategy I would like to discuss is Kylie Cosmetics’ promotional sales and affordable line on social media. This is crucial to the brand’s success because she reaches a wide number of consumers and meets their budget. The cosmetics price range gives people interested in makeup the opportunity to own the best of the best products — according to the profit. By monitoring her social media from September 12-23, Kylie has promoted 40 of her products on just one app in a matter of 11 days. With each post getting hundreds of thousands, sometimes millions of likes it is clear that social media has completely fueled Kylie Cosmetics to become a billion-dollar brand because the products are able to be purchased directly on Instagram and Facebook.

I believe that Instagram is the current favorite social media app among the younger “impressionable” generation because it brings you closer to direct contact with famous icons and people all over the world. However, Facebook is still very relevant to a percentage of younger people, and a lasting social media staple for older generations. By being able to shop Kylie Cosmetics products directly through Facebook, it appeals to a completely different audience and expands the brand’s name. If a 55-year-old godmother is on Facebook browsing through family pictures and stumbles upon this brand’s page through ads, tags or friend reposts, she may remember her goddaughter’s birthday coming up — and the gift idea is right in front of her. Kylie Cosmetics promotional sales offering 50-70 percent flash sales through Facebook, Instagram and Google incline her audience to act on the incredible deal.

The third PR object I would like to confabulate on is Kylie Jenner’s role of transparency towards her brand. While her life is extremely connected to the success of her company, her personal life has yet to impede the brand’s success. A very important idea to consider is the secrecy of her pregnancy. Kylie hid her pregnancy by only being photographed from the chest up, rarely going out in public unless necessary, and by not confirming to any news source whether she was pregnant or not. Additionally, in hiding her pregnancy so well to avoid negative publicity, she also separates her family drama from her brand. Arguably the reason why she is famous, the Kardashian/Jenner empire is notoriously known for the high activity of drama and conflict in their perfect life between each family member and other celebrities. While Kylie is still present on the very famous show “Keeping Up With The Kardashians,” she mentions no connections to the show in discussion of her brand. By anti-publicizing her family’s show and life events like her pregnancy or love interests, it adds an aspect of professionalism to Kylie Cosmetics. Information about a person is so easily found due to the rapid information flow derived from social media, so when the world found out about the birth of her daughter, sales skyrocketed. This is a brilliant public relations strategy. Not only is her fan base shaken up from the shock of her announcement, but she has increased her follower count to yet another demographic: mothers.

The specific industry trends I would like to touch base on I categorized together. I did this because the particular trends all relate to each other in a unified way. The first thing I would like to point out is Kylie Cosmetics’ inclusion of race. By including a woman of every race as a model for a certain palette or product, it covers ground to every person of color and to reach business quotas. I personally believe that Kylie Cosmetics is so successful because of the inclusion of almost all groups of people on the planet.

Kylie Cosmetics also came out with a collaboration with both Jordyn Woods and Kris Jenner. Jordyn Woods and Kylie Jenner have been known as the “best of friends” for as long as Kylie has been one of the top faces of social media. Their friendship is adored and envied by many of their millions of followers. Kylie Cosmetics’ collaboration with Woods, who is a previous plus-sized model and family friend to many famous celebrities including Will Smith, only increases Kylie Cosmetics’ sales by reaching out to an even broader audience scope. Adults whose favorite actor is Will Smith while they were Kylie Jenner’s age now, see that Will Smith and his family endorse not only their relationship but Kylie Cosmetics’ success. Kylie Cosmetics’ introduction of Kris Jenner’s inclusion in the collection: Momager boasts a wider audience of the one group of people typically known as the least interested in social media: men and women with little to no social media interaction over the age of 50. Kris Jenner is 62 years old and having a collection based on a woman that age invites older generations to be a part of certain industry trends such as this. 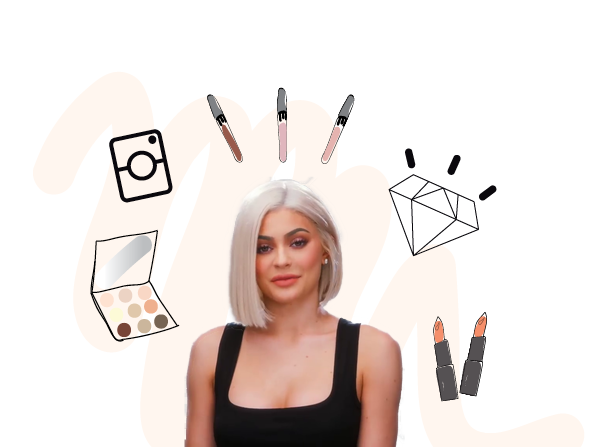 The last thing I want to talk about regarding Kylie Cosmetics’ presence on social media is a foreshadowing company weakness and the brand’s stance over competitors. The weakness I would like to point out is that the products only appeal to a niche market. While that market makes up every female and male that proudly wear and support this brand’s makeup, it is seen in a certain light that can scare away masculine men.

Social media personalities like James Charles, who is the first male spokesperson for CoverGirl, proudly wears makeup which compliments his personality known for being very open about his sexual orientation and personal life. Similar to Charles, Jeffree Star, who is a social media celebrity as well as a makeup artist, entrepreneur and musician is the founder of Jeffree Star Cosmetics and consequently a competitor of Kylie Cosmetics. These two men are the face of male cosmetology, but the demographic that is missing from this equation are men that identify as “masculine.” A missed opportunity I would like to explore would be including “masculine” identifying men in the scheme of makeup. I would propose to the company that they eliminate the bias of men not wearing makeup and create a concealer stick for acne and blemishes that could be represented by any of Kylie Jenner’s famous friends. There has been a long-standing stigma of masculine identifying heterosexual men not using makeup. To open a completely new market and start a revolution, I would propose to Kylie Cosmetics that they end this stigma and endorse this idea.

Regarding Kylie Cosmetics’ competitors and tying the owner of the brand back into the face of responsibility comes an intrinsic weakness. Kylie Jenner is the figurehead of her company and any model shaped like this is vulnerable to the weakness of her making a mistake in her personal life that trickles over to her business sales. As mentioned previously, Jeffree Star is also the figurehead of his brand. The difference between the two is that Jeffree Star and Kylie Jenner are perceived completely differently by the public based on their social media presences. Jeffree Star is known to be seen as very outspoken, extravagant and unapologetically opinionated. Kylie Jenner, on the other hand, is perceived generally as a more graceful and reserved figure. Kylie Jenner gets more attacked due to scandals and reputation, while Jeffree Star is usually more deliberate with the intensity of his “harsh” comments. This is a possible weakness that would affect the sales of Kylie Cosmetics and damage the company’s reputation.

Overall, Kylie Cosmetics has altered the social media empire. The insane craze of fame towards the owner, Kylie Jenner, is the main source of the success for the brand. Kylie Cosmetics’ strategic forms of social media presence, which include selling herself as the brand, promotional sales and transparency, mean for the practice of PR that there is an entirely different toolset for success and appropriately managing scandal.