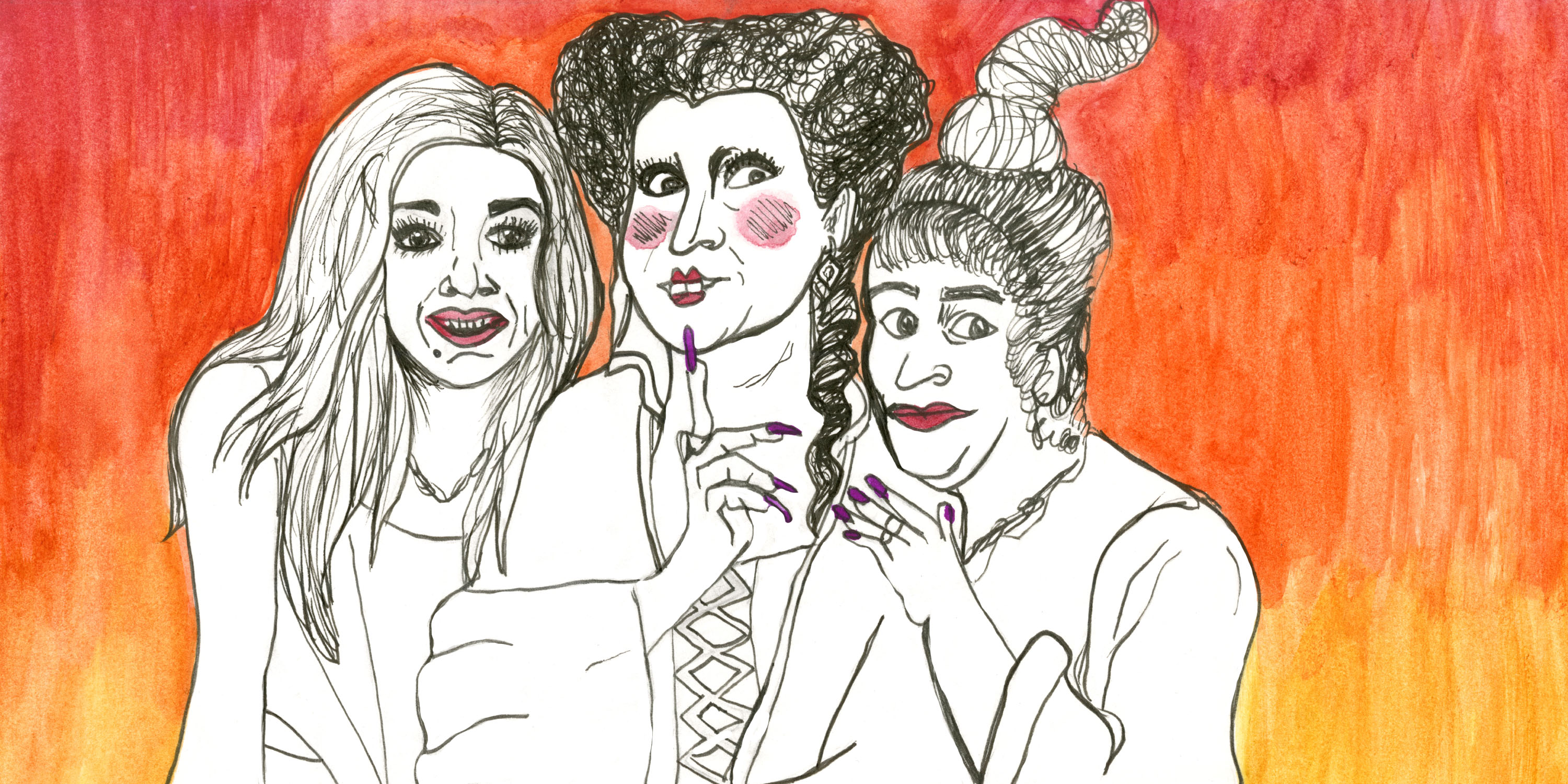 On October 7, a line of people adorned with witch hats and face paint wrapped around the block outside the Music Box Theatre in Chicago’s Lakeview neighborhood. As the crowd entered the theater, each person was handed a bag of items including a glow stick, bubbles, candy and streamers along with instructions on when to use the objects and when to participate aloud in the Hex-A-Long. The Hex-A-Long, not unlike screenings of “The Rocky Horror Picture Show” audience callbacks, was written to accompany the movie for the 25th-anniversary screening of “Hocus Pocus.” Popcorn, goody bag and Hex-A-Long sheet in hand, the sold-out theater filled quickly and attendees settled in for the classic 1993 film. Most were families or groups of people in their mid-twenties, all who could be overheard recounting stories of their connection with the film. It holds a place of collective nostalgia for most, acting as a time capsule for what trick-or-treating on Halloween night in the suburbs was like in the ‘90s. For me, though, this was my first time seeing the Halloween cult classic — ever.

Twenty-five years after its initial release, “Hocus Pocus” has remained a part of the cultural zeitgeist as a cult classic. A cult film is typically a film that was initially received poorly but later develops a following of adoring fans. Some of the most well-known cult films are “Nosferatu,” “The Room” and “Rocky Horror Picture Show.” Though “Hocus Pocus” isn’t categorized as a cult movie as much as the aforementioned films, it fits the definition. Its first reviews were comically bad, but over time it is always played on ABC Family and shown in theaters around Halloween. Though much of the story does not hold up two-and-a-half decades later, “Hocus Pocus” is a nostalgia-based cult movie that elicits emotion from audiences from its specific generalities: trick-or-treating, spooky decor, fall leaves and the like are the perfect autumnal backdrop for the movie.

The film focuses on three witches named Mary (Kathy Najimy), Winifred (Bette Midler) and Sarah Sanderson (Sarah Jessica Parker) who were killed for witchcraft in 1693. After the young protagonist Max Dennison lights a candle on Halloween three hundred years later, the sisters are brought back to life. The Sanderson sisters intend to eat all the children in the town by luring them to their cabin, so Max, his sister Dani and his crush Allison set out to stop them. A thrilling evening ensues after Max steals the Sanderson sisters’ spellbook to prevent them from brewing the potion for eternal youth. Along the way, the kids are helped by Binx the cat and Billy Butcherson the zombie, both of whom hold grudges against the witches. All of this happens in the quintessential fall setting: everything is covered in fake spiderwebs, colorful leaves line the sidewalks, Jack-O-Lanterns sit on every porch — you can nearly smell the mulled cider.

Watching this film lacking rose-colored glasses of nostalgia is a bit strange and certainly exacerbates its flaws. Though charming and enjoyable for the most part, there are race- and sexuality-related issues in the film that feel outdated today. However, these elements are balanced with an interesting portrayal of witches that is somewhat empowering.

Witches in film and in history are a dual-edged sword. They are women who don’t need men, which can be very empowering especially for viewers who are not men. Yet, they are also demonized for their abilities, called hysterical and often killed for claiming their power. Witches appeared in a variety of media prior to “Hocus Pocus” and were usually killed by the end such as in “The Wizard of Oz,” “The Crucible” and “Suspiria.”  The story of the Sanderson sisters is loosely based on the Salem witch trials, the same true events that inspired “The Crucible” in which women who were accused of practicing witchcraft were falsely executed for exercising their power. This acts as a metaphor for how society treats women as a whole: women are berated for standing up for themselves because men recognize that their patriarchal power could possibly be threatened. So, from a feminist standpoint, witches are figures of empowerment while from a patriarchal standpoint, they are a menace. The Sanderson sisters are powerful and share a strong sense of sisterhood, yet the entire point of the movie is for their power to be extinguished for the safety of Salem. When the sisters are awaken 300 years later — by a male protagonist, as well  — the damning patriarchal structures have not changed. They again enter society as a threat, wherein they must die.

The way “Hocus Pocus” dealt with race, or more so, the way it didn’t, is emblematic of a larger problem of pervasive whiteness in film. Every speaking role was played by a white person and two white characters, the bullies, Jay and Ice, borrow elements of blackness in their characters such as the way they speak, the name “Ice” and the way they dress. None of this is particularly unusual— historically, films have been created by, with, and for white people — though it is apparent in the making of “Hocus Pocus” no efforts were made to represent the experiences of people of color or even represent their existence.

In addition to the overrepresentation of whiteness, straightness is also the default norm in “Hocus Pocus.” Heterosexuality is nearly its own character. Logically, the story does not need a love story to further the plot of saving the town from the Sanderson sisters. Compulsory heterosexuality, a term coined by Adrienne Rich to describe society forcibly pushing all people into heterosexuality, is a strong element in the movie. There is a heterosexual story line between Max and Allison and multiple grown men make comments about young girls’ appearances that are unnecessary to the narrative. It is also notable that when the witches are brought back to life, Max is only able to light the candle because he is a virgin, which is a requirement for the magical candle to be lit. Virginity is socially constructed as a barometer for proper practice of heterosexuality. It is applied differently based on gender, though, and in the case of this movie, it is a point of ridicule that Max is still a virgin and able to light the candle even though he is just a teenager. The plot rests heavily on Max’s virginity and his budding relationship with Allison, so much so that the story would be completely different if these elements to be removed.

Being the white-centric and extremely heterosexual film that it is, “Hocus Pocus” doesn’t work to push boundaries, though that was likely not the film’s intention. It exists as a silly, spooky, family-friendly trip to Halloween in the ‘90s filled with nostalgia and with more women in leading roles than is usual for films of that time. It persists as a nostalgic cult classic, though that doesn’t mean it holds up over time. It is riddled with issues of sexism, racism and compulsory heterosexuality that leave a bit of bitter aftertaste for new viewers in 2018. Though, it is definitely still fun to watch in a theater filled with people in witch hats waving glow sticks and shouting back to the screen.