Our Favorite Stories From 2018

Under the Needle: Young Consumers Turn to Preventa...

Under the Needle: Young Consumers Turn to Preventative Botox 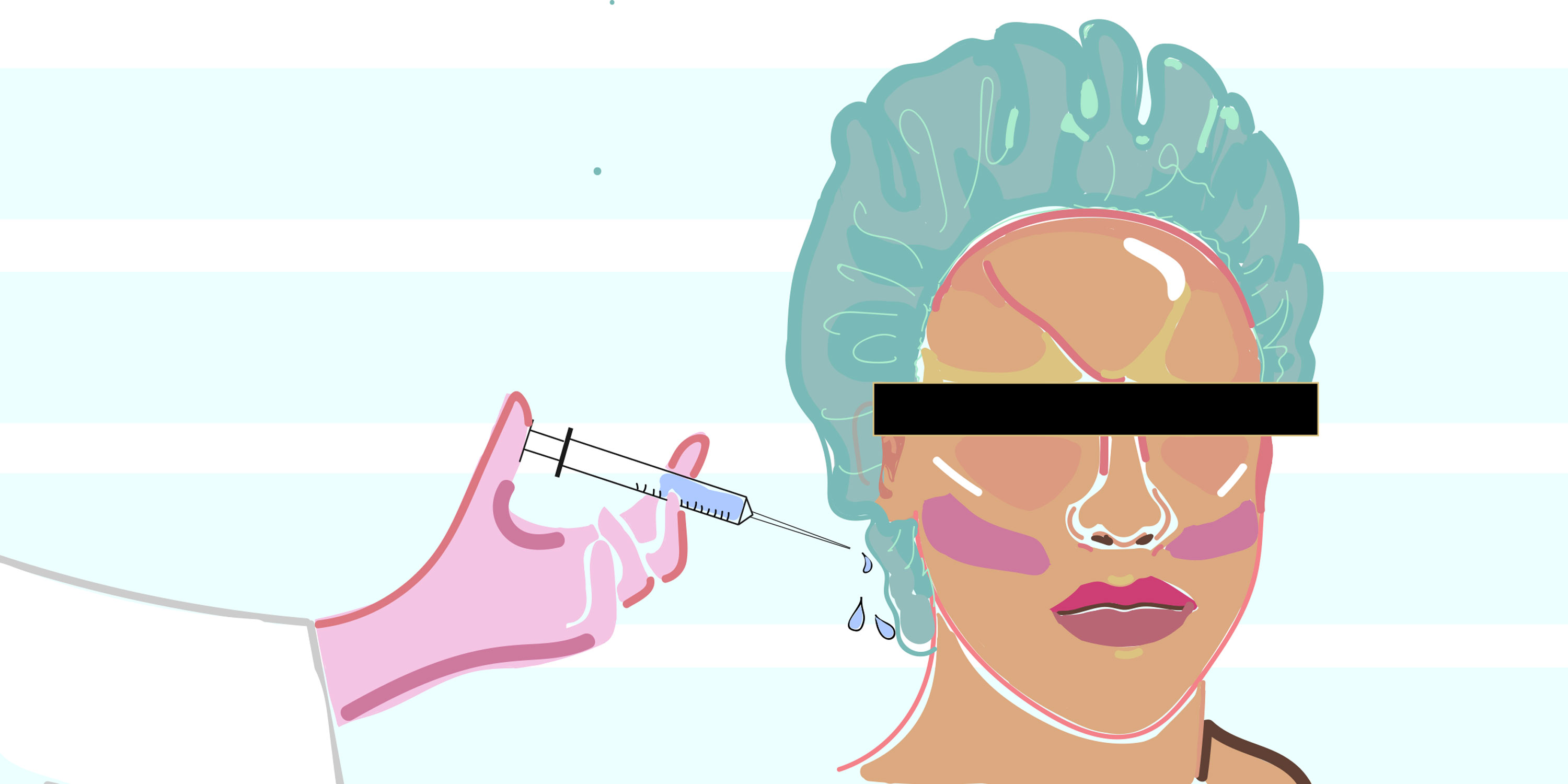 Shanna is 29, but she’s been getting Botox injections since she was about 26.

“I guess I noticed I was getting a little bit of wrinkling around my eyes,” said the Chicago resident, who prefers to be identified by her first name only to remain anonymous. For Shanna, one of the best parts of the Botox treatments are the way they’ve changed her face in photos. No longer does she have to use any kind of filter or Photoshop to hide wrinkles — Botox fixed that.

“In my circle of friends, everyone has had some sort of work done,” said Shanna, who estimates she gets Botox about every six months. “And pretty much all my friends who don’t do it probably should.”

Shanna isn’t alone — more women and men in their 20s and 30s have turned to preventative Botox to eliminate signs of aging, a strategy aimed at treating wrinkles and creases before they really form to keep them at bay. Because Botox temporarily paralyzes the muscle in the injection area, the toxin is also used to treat conditions like excessive sweating or migraines. But preventative Botox is solely focused on targeting unwanted wrinkles, usually on the face.

According to the American Society of Plastic Surgeons, Botox was the No. 1 performed minimally-invasive procedure in 2017, up 2 percent from 2016 with 7.23 million Botox procedures performed in the U.S. alone.

“I have absolutely seen an uptick in the number of younger patients coming in for Botox treatments,” said Dr. Lorri Cobbins, a board-certified plastic surgeon at The Aesthetic Institute of Chicago. “I’ve always had a somewhat younger patient base, whether it be for surgery or injectables. However, over the past year it has really increased.”

The average age of Dr. Cobbins’ younger Botox patient is 26, most of whom are female and who she believes take the time to educate themselves on how to look younger for longer. Cobbins explains that many of her younger patients have started and continued with Botox treatments because of the rewarding results.

“You are decreasing muscle contraction within the area that is being treated,” said Cobbins. “With continued use over time, this will decrease the appearance of frown lines, which can make us look older or angry.”

Botox minimizes your ability to make “angry faces,” according to Cobbins, such as furrowing your brow.

“As you age you will be training yourself not to frown which can keep a person looking fresher and younger,” said Cobbins.

Ali Nezam, managing partner at Beautify Med Spa in Chicago, said his practice has also seen a recent change in the age of Botox clients.

He added that the shift towards younger Botox customers has taken place over the last two to three years.

“In the beginning, people had stigma towards fillers and injections,” said Nezam. “But it has become more publicized through social media and advertising and more doctors talking about the reasons for preventative Botox.”

The trend that both Nezam and Cobbins have seen is no secret to Allergan, the pharmaceutical company that owns the Botox product. Allergan will reportedly be launching an advertising campaign at the end of 2018 aimed at getting more millennials interested in preventative Botox. According to Allergan’s 2018 Medical Aesthetics Day Presentation, the campaign will ask millennials if they are “bo-curious,” and will focus on creating interest and conversation around the Botox product while convincing a younger demographic of customers that this product is “not your mama’s Botox.”

“After more than 15 years on the market, we’re going to invest in Botox in ways we really never have before,” said Carrie Strom, Allergan’s senior vice president of medical aesthetics, during the company’s investor-focused presentation. “The campaign will continue to normalize Botox. It’s going to make it fun and easy to talk about it — fun to talk about it with your friends and family and easy to ask for it by name from your medical provider.”

Botox is a top-selling product for Allergan, and according to CNBC, Botox continued to lead company sales in the third quarter of 2018, generating $879.7 million for Allergan and exceeding the company’s sales projections for the quarter. Botox generated $2.8 billion in sales in 2017, and Allergan projects that the facial injectable market will double by 2025. 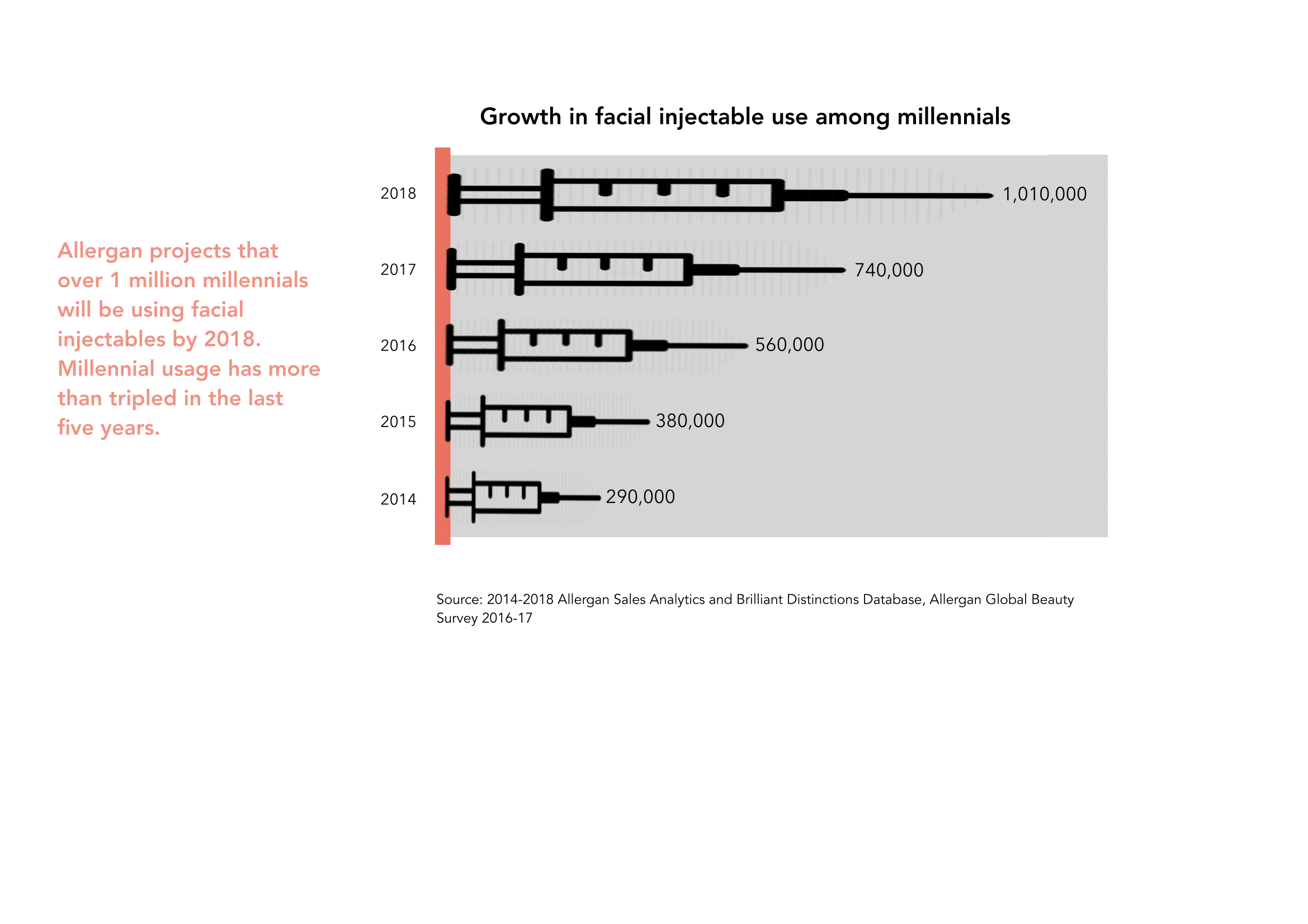 An ad campaign focused on younger customers also comes after facial injectable use by millennials in the U.S. has more than tripled since 2014. Allergan expects that there will be over 1 million millennial facial injectable users by 2018, who are driven by more buying power than previous generations have had and more interest in preventing signs of aging.

“Millennials are one of the generations with the highest disposable income in the history of the U.S.,” said Juan Mundel, assistant professor of advertising at DePaul University. “I think that this is a part of a bigger industry trend in which a number of health companies are starting to focus on millennials.”

Botox treatments can be pricey, depending on who is injecting the Botox and how many units of Botox a client is getting. According to Dr. Cobbins, sessions typically range from around $150 to $350 or more for younger clients who don’t require large doses, and the average Botox treatment will last up to three or four months before the client needs to return for another session.

Based on these numbers, a hypothetical client who started Botox treatments at the age of 25 and continued until the age of 65 would spend $18,000 on Botox injections over the span of 40 years. That’s assuming they wait the full four months between sessions, receiving three treatments a year at the lower-end cost of $150 per session.

But for some younger clients like Shanna, the cost of Botox isn’t really the priority.

“It’s absolutely worth it, so I would pay more if that’s what it cost,” she said. “I would not ever look for a discount. It’s my face.”

Anna Ulyanov, an aesthetics nurse injector at Lincoln Park Aesthetics, agrees that a younger demographic of customers are willing to spend their money on Botox treatments. Ulyanov has been administering Botox injections for almost four years, and believes that Botox is becoming much more conventional and accepted among consumers. She’s seen clients as young as 18 years old come in for injections, and even some “Botox parties,” where a group will come in together to receive Botox before an event like a wedding.

“It’s always been important to everyone to look their best and feel their best,” said Ulyanov about Botox. “It’s more acceptable and widely known now and no one keeps it a secret anymore.”

Social media has played a vital role in Botox becoming less of a secret and more of a beauty trend, increasing exposure and helping make the conversation around Botox more widely accessible and prevalent. Dr. Cobbins believes that social media has contributed to the rise in the number of younger Botox clients at her practice, who are more willing to discuss their experiences with Botox and are open to sharing their “before and after” appearances.

Allergan has also recognized digital and social media as an important tool in their marketing efforts, enabling a key demographic of millennials who are “unapologetic and unafraid of aesthetics.” During their 2018 Medical Aesthetics Day Presentation, the company reported there were currently 3.3 million Instagram posts with the hashtag #botox, and that there have been over 50 million Google searches on medical aesthetics.

“This generation is a lot more open, so they are the right people to go after because it is already out there and on their radar,” said Mundel. “With previous generations, you needed to be more tactful and careful not to offend them, but with this younger generation, it’s more ‘If I can fix it, let me grab it with both hands.’”

Allergan’s new ad campaign aimed at younger men and women also comes as a handful of toxin competitors have popped up, posing a potential threat to Botox’s 70 percent market share. Allergan has continued to emphasize the importance of Botox as a household brand name product that is known and trusted among consumers, and their push to market to millennials and efforts to raise brand awareness make sense in the face of increased competition. The Botox toxin is also a trade secret that is closely guarded by Allergan, and many companies who have tried to recreate the toxin have failed, giving Allergan a major advantage in the facial injectable market.

There is still much unknown about the long-term health effects of injecting a toxin into the human body, as Botox has only been on the market for 15 years. The powerful botulinum toxin itself, which Botox is derived from, is heavily regulated by the Center for Disease Control and is considered a potential agent of use in bioterrorism, as a small amount of the toxin can paralyze a person’s breathing muscles and lead to suffocation.

Still, it doesn’t appear that potential long-term health repercussions take precedent over the immediate benefits of Botox treatments for some customers, especially considering Botox’s profits and the substantial increase in millennial facial injectable use.

“Botox still has an opportunity to connect with young consumers because of this obsession we have with being youthful,” said Mundel. “I don’t think people would necessarily go in and get their face pierced by a needle with Botox if they weren’t afraid of the consequence of not doing it.”