A Day with a Daughter of Charity

Marissa Does Sports: What Wome..

A Day with a Daughter of Charity 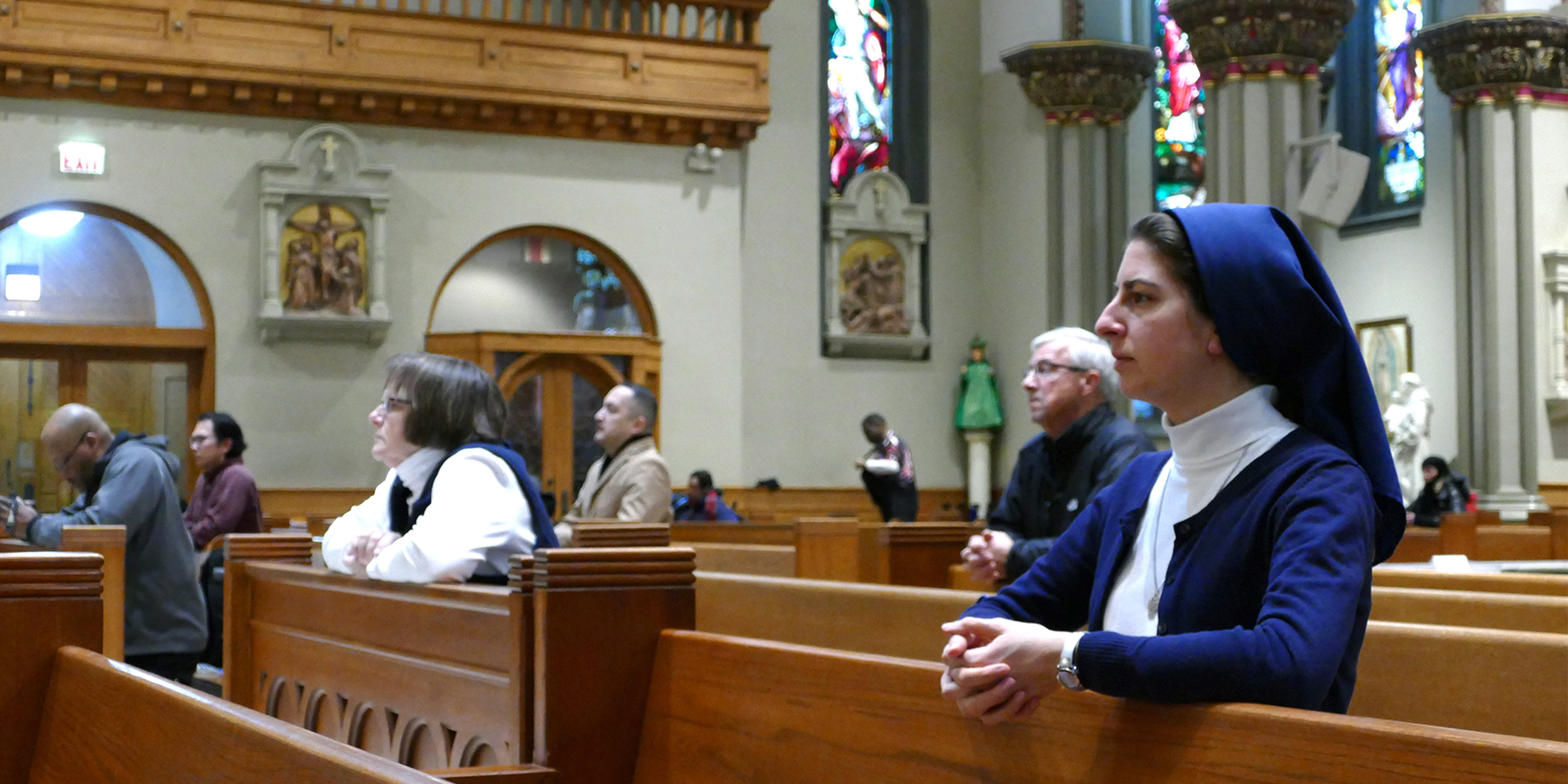 Though Sister Kara Davis has lived in Chicago for just over 10 months, the legacy she carries with her has been in the city for 158 years — and she doesn’t take this lightly.

“Before I was even born, the Daughters of Charity were here,” Davis said. “That legacy continues, that’s something I’m kind of growing into at ministry and in my prayers, like whoo. Now what?”

Sometimes, when walking to the St. Vincent de Paul Parish or Our Lady of Sorrows Basilica in Lincoln Park and East Garfield Park respectively — both are neighborhoods she works in — she is reminded of this legacy.

“Occasionally someone will say, ‘Oh, hi Sister. Hi Sister. I went to Marillac when I was a kid.’ Or, ‘Can you pray for my grandma,’” Davis said. “They have no clue who I am, but they know the Daughters of Charity and they know that Marillac is safe. They know that Sisters are kind, you know. I literally get to walk in their footsteps. I get to walk in that legacy and it’s overwhelming and humbling all at the same time.”

In August 2014, at 24 years old, Davis began pre-postulancy — a time to discern one’s vocation and the first step to entering the Daughters of Charity. She officially became a Daughter of Charity on August 21, 2016.

“I entered the Daughters of Charity because I felt called to be a Catholic sister and to dedicate my life to service,” Davis said. “I am a Daughter of Charity because that was the community that entered my life when I was searching, and kept reappearing in unexpected ways when I wasn’t searching.”

What “sealed the deal” for Davis when she decided to enter the Daughters of Charity instead of another religious order was the way in which the Daughters serve — with “love, dignity, respect, humility, humor and reverence,” according to Davis.

“I knew that if God was calling me to serve the poor, this was how I wanted to do it,” she said.

On April 21, 2018, Davis was sent on her first mission as a Daughter of Charity. She was sent to Chicago to be a speech-language pathologist, a specialty she earned a master’s degree in at Eastern Illinois University. She splits her time working between the St. Vincent de Paul Center and the Marillac Social Center.

Living a legacy of service

In 1867 the Daughters opened the House of Providence — located on Chicago’s Near North Side, just south of the Chicago Red Line stop — to provide shelter for women and children experiencing homelessness. During the cholera outbreak in 1868, the Daughters served at Providence Hospital. Almost a century later in 1965, their work for social justice continued, remaining true to their mission as six Daughters were arrested for protesting Chicago’s segregated public schools and former superintendent Benjamin Willis.

Within the community, Davis is the newest and youngest Daughter of Charity. The other Sisters living in Chicago have been a part of the community for upwards of 50 years.

In addition to vows of poverty, chastity and obedience, the Daughters of Charity make a fourth vow of service to the poor. There are over 16,000 Daughters of Charity across more than 90 countries. They live together, typically in groups of seven, in the communities they serve. However, throughout her life, a Daughter rarely settles down in one place. She typically moves between communities depending on where the need is.

“It’s challenging and wonderful,” Sister Joanne Vasa said. “When families move and they relocate new a new job, they take their family with them. But we just go, basically with Christ. There might be people there we know or there might not.”

The older Vasa gets, the harder she finds it to move when she is sent on a new mission. Each time she has to find a new doctor, a new dentist and begin to learn a new community.

“Just something as simple as finding someone to cut your hair the way you want it,” Vasa said. She’s been in Chicago since Fall 2017. After a year she said she got everything figured out. “But it’s for a deeper purpose, you know?”

Seven years ago Sister Betty Ann McNeil moved to Chicago. McNeil grew up on the East Coast and spent 45 years on her missions there. So, while she moved frequently, she was often familiar with the area she lived in. In 2012 an opportunity opened up at DePaul University and she uprooted herself and moved westward to Chicago — which was uncharted territory for McNeil.

“It was really a new beginning,” McNeil said. “An unfamiliar geographic plane, totally. Every time I looked at a sign to try and see what street it was, it was always honoring somebody or other. I thought, ‘Well, where’s the name of the street?’”

The other Sisters laughed. The growing pains of getting to know an unfamiliar city is a familiar feeling to all of them.

“Like Sr. Joanne was saying, you bring Christ with you,” Davis said. “I think that’s what helps me cope with all of the changes is when everything is turned upside down and everything is so different, is what remains the same.” 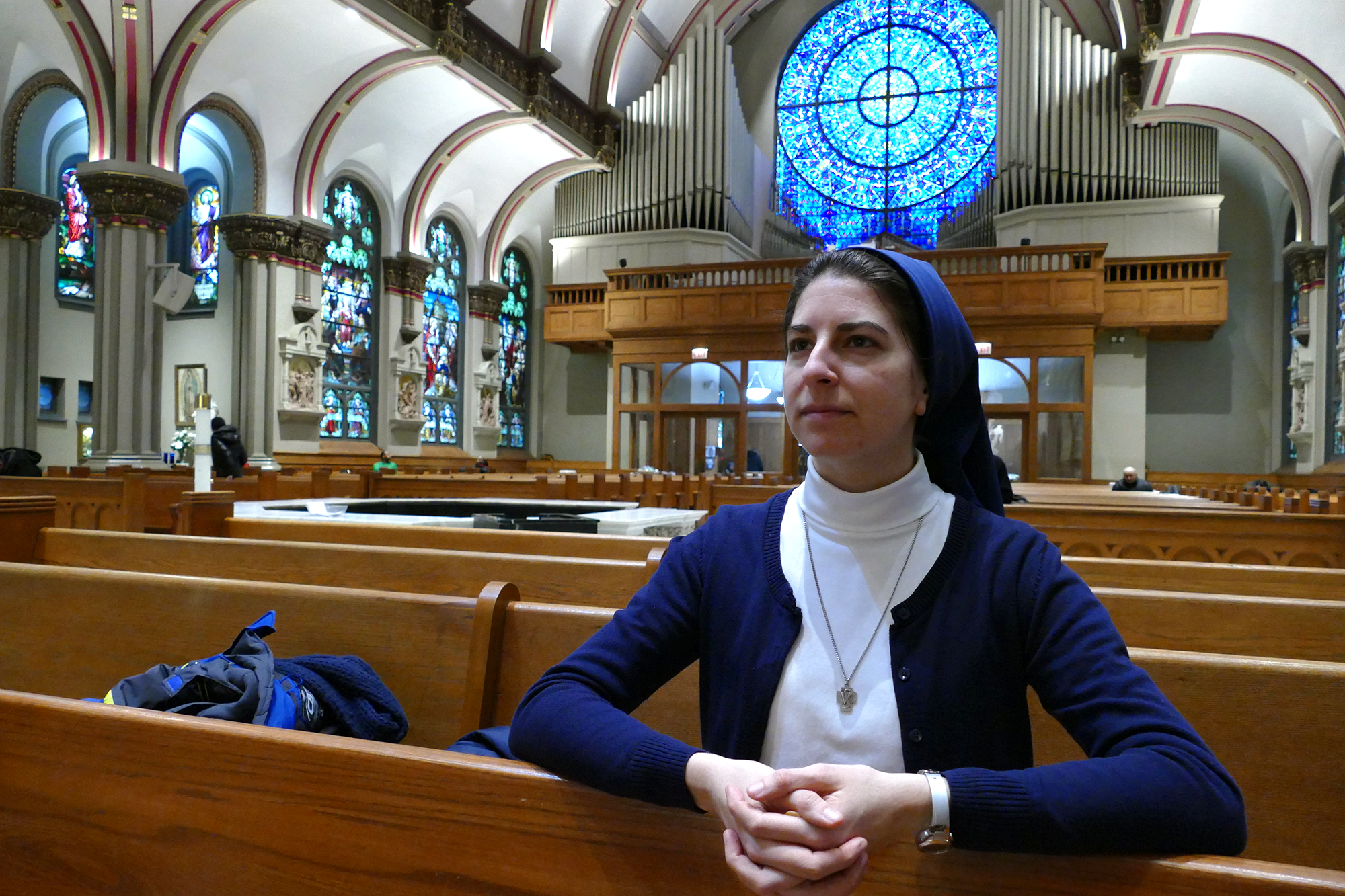 Prayer, community life — or living with one another — and service to the poor are the three major parts of the life of a Daughter of Charity. Each morning, Davis attends Mass at a different parish in Chicago. On Jan. 28, 2019, Davis worshipped at the St. Vincent de Paul Parish 8 a.m. Mass. (Marissa Nelson, 14 East) 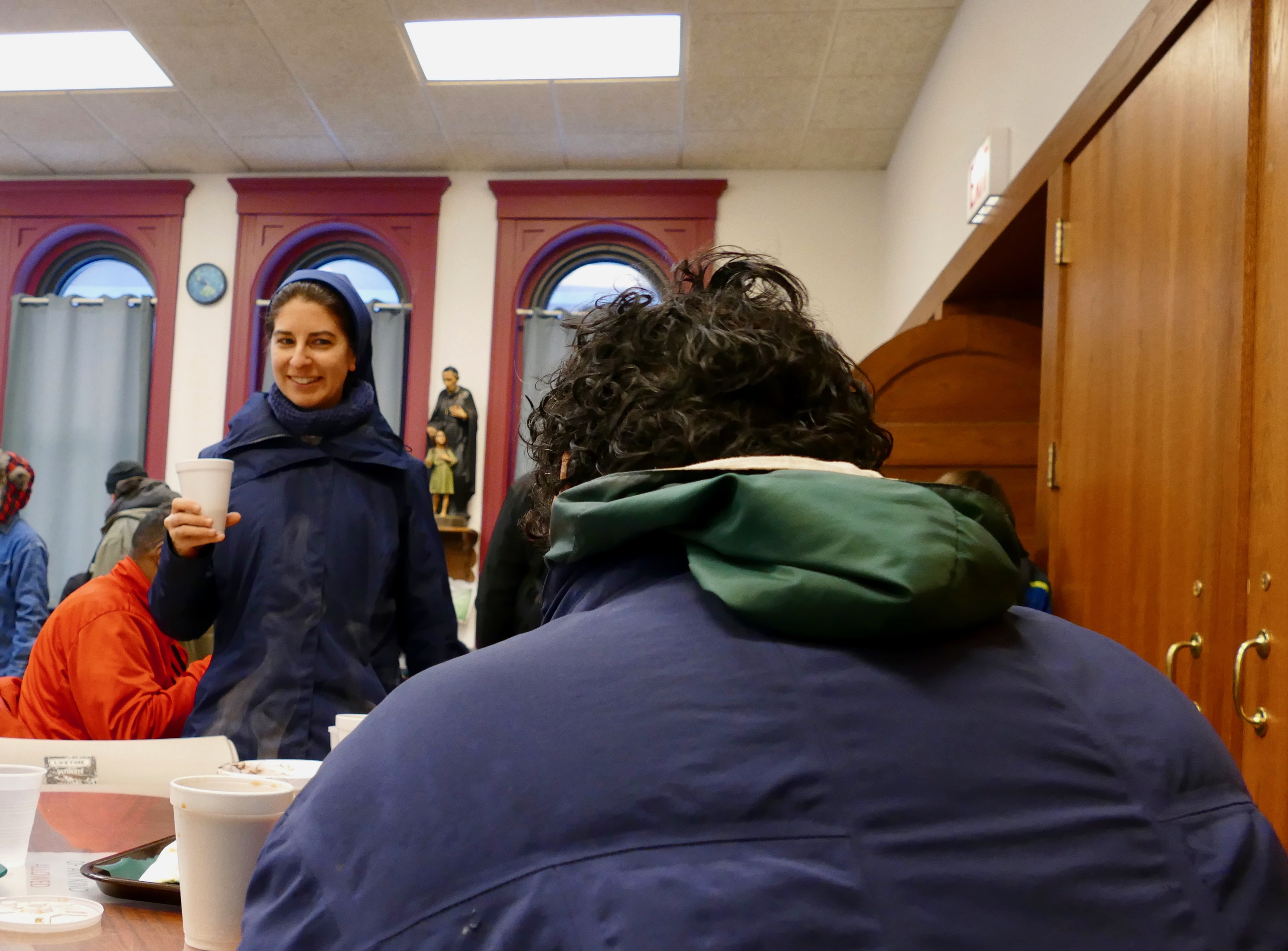 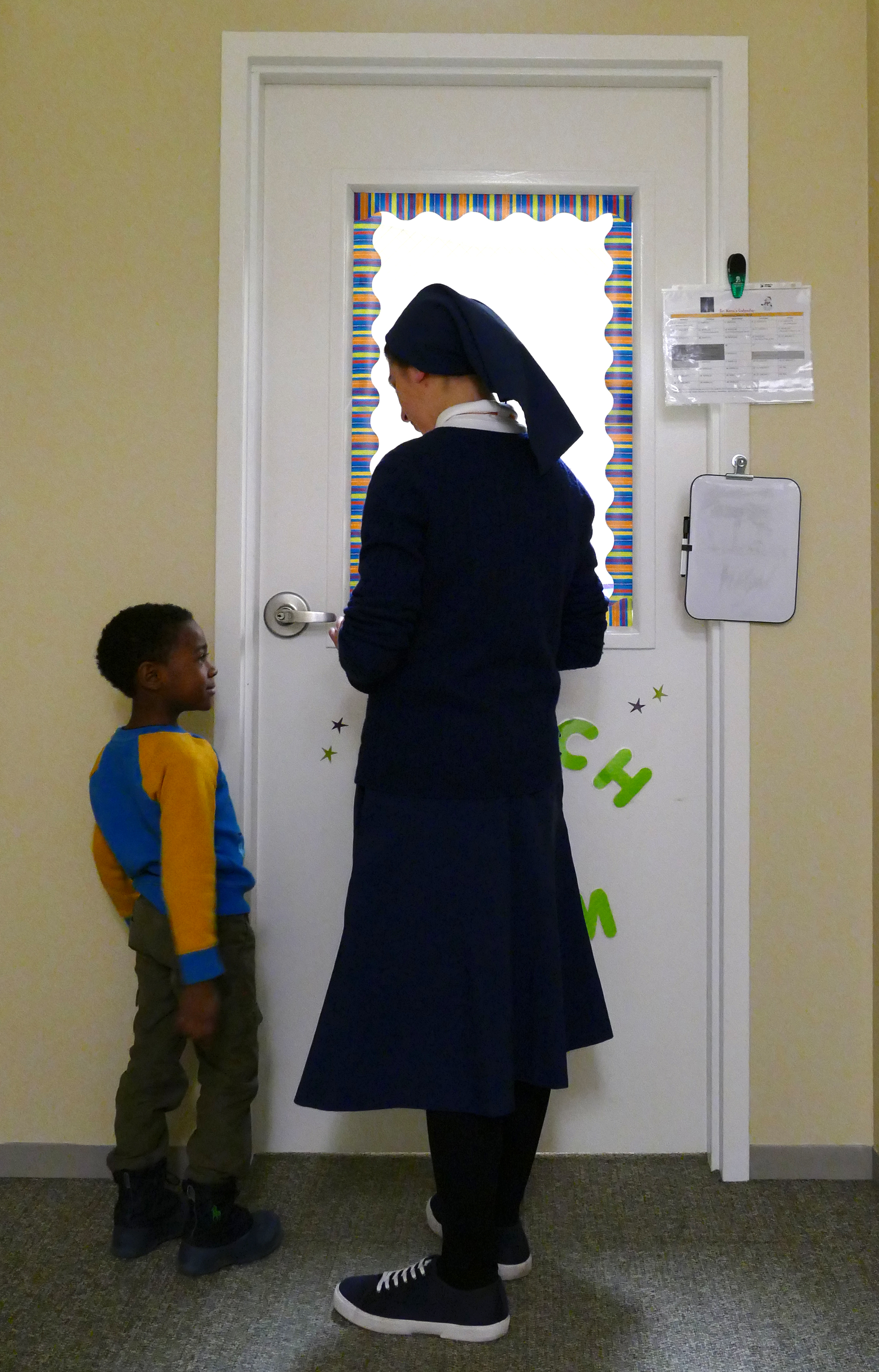 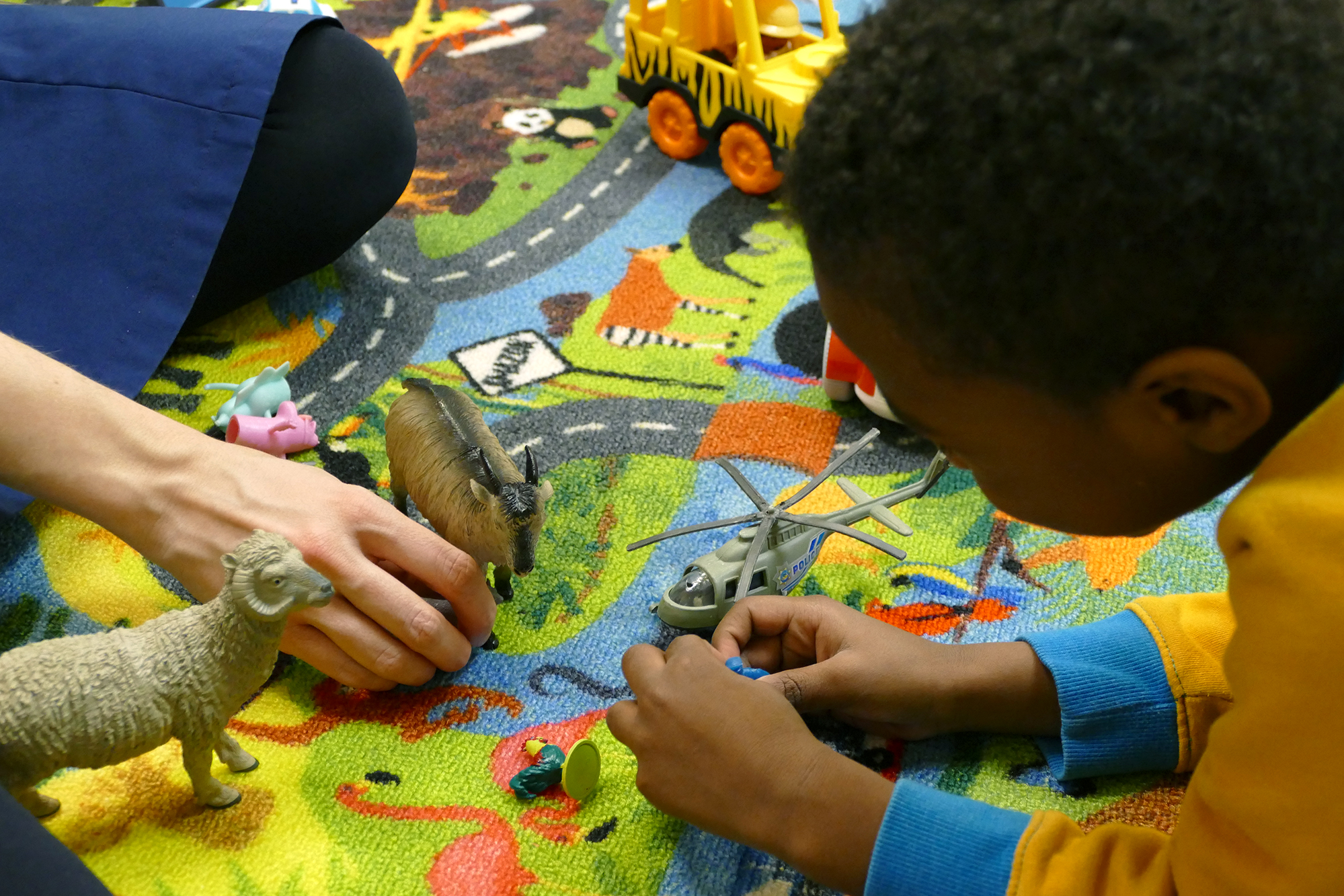 Davis uses a variety of activities to encourage students to practice their speech. On Jan. 29, 2019, Davis worked with Don to distinguish between the word “Jeep” and “sheep.” (Marissa Nelson, 14 East) 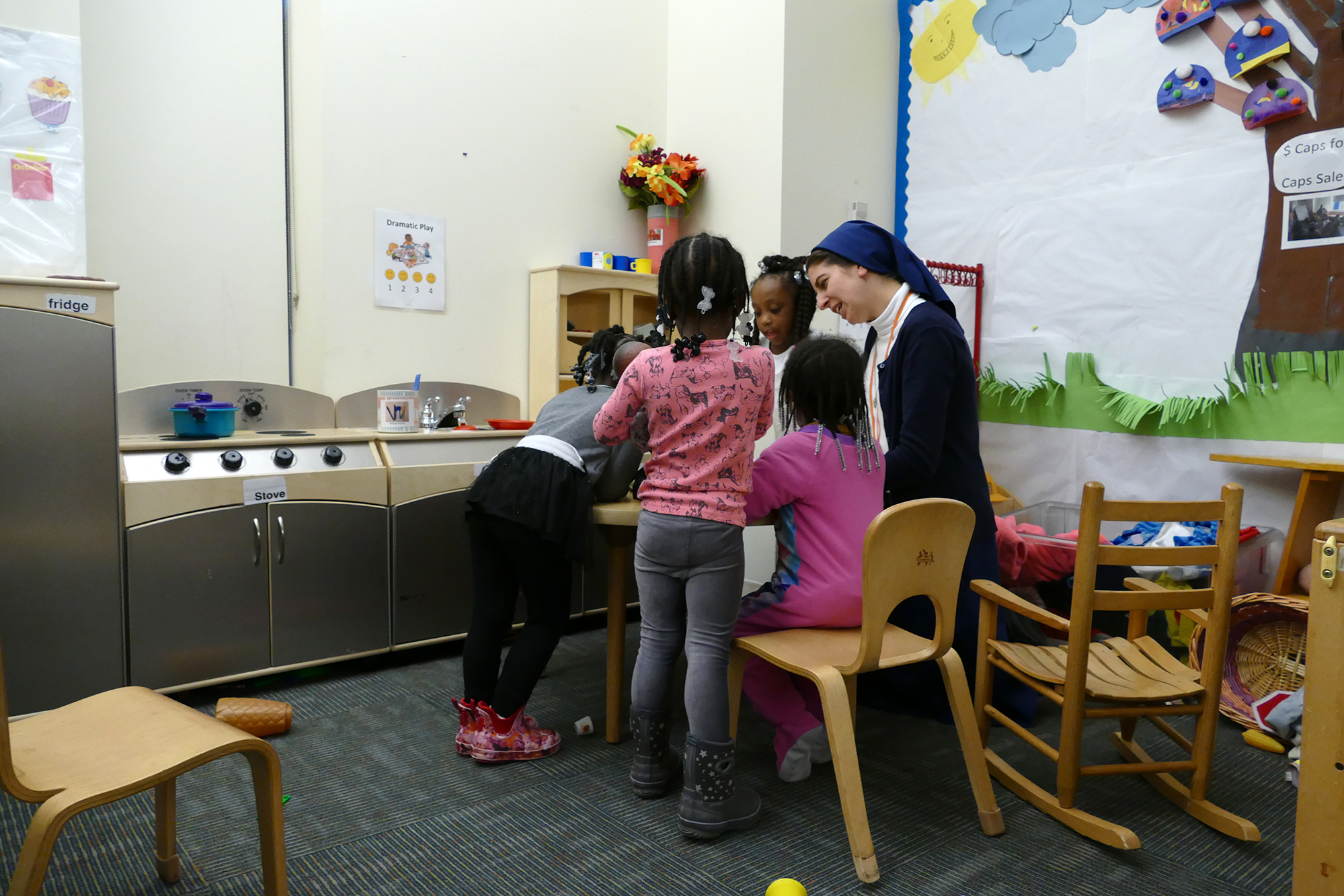 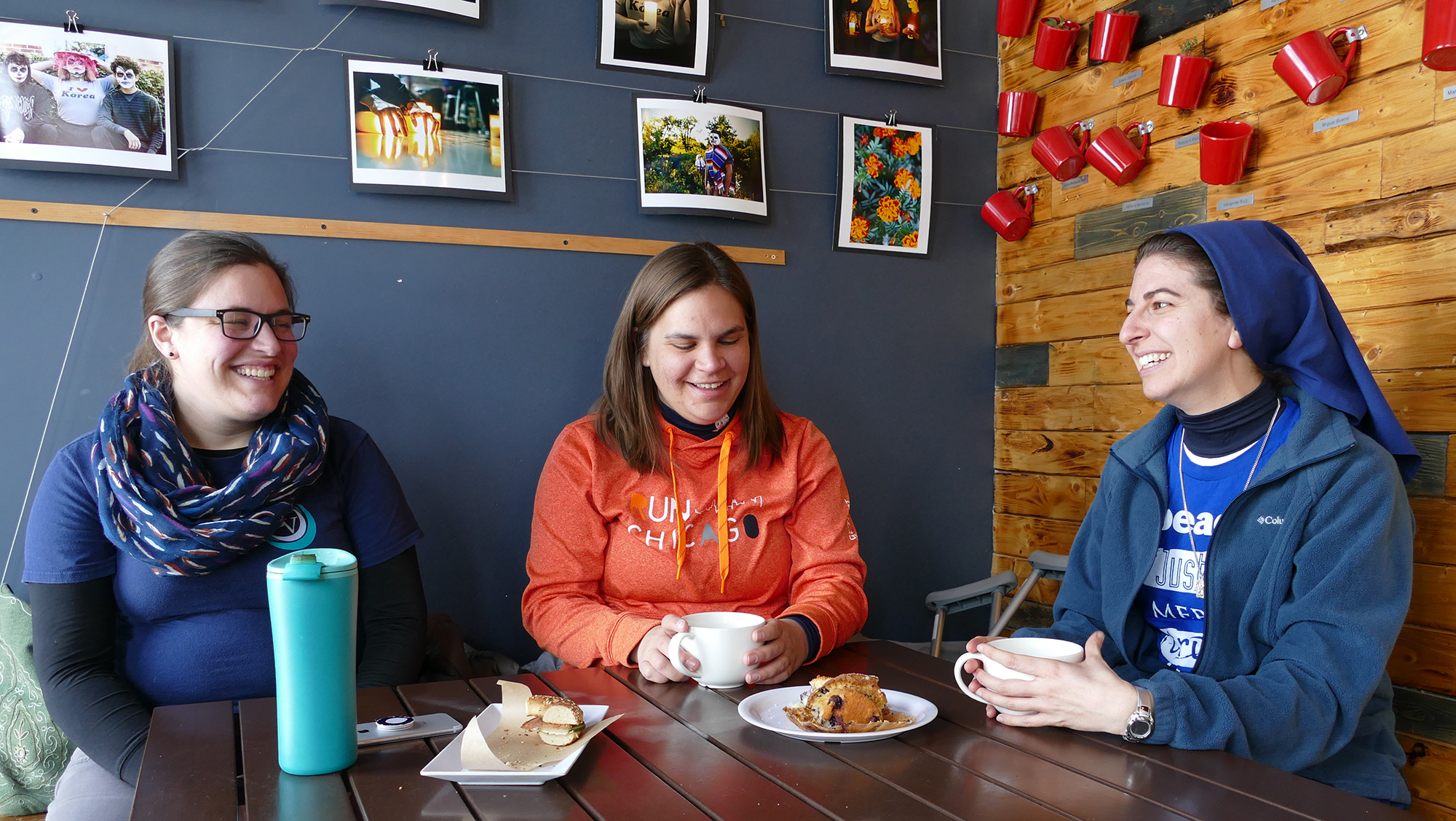 Today, fewer women enter community life than they used to, so younger women in different communities have begun to collaborate with one another. After the Chicago Catholic Sister’s social justice group held a prayer for nonviolent solidarity in reaction to gun violence in Chicago, Sister Mary Therese Krueger, Sister Emily TeKolste and Davis caught up over coffee at Back of the Yards Coffeehouse on Jan. 26, 2019. (Marissa Nelson, 14 East) 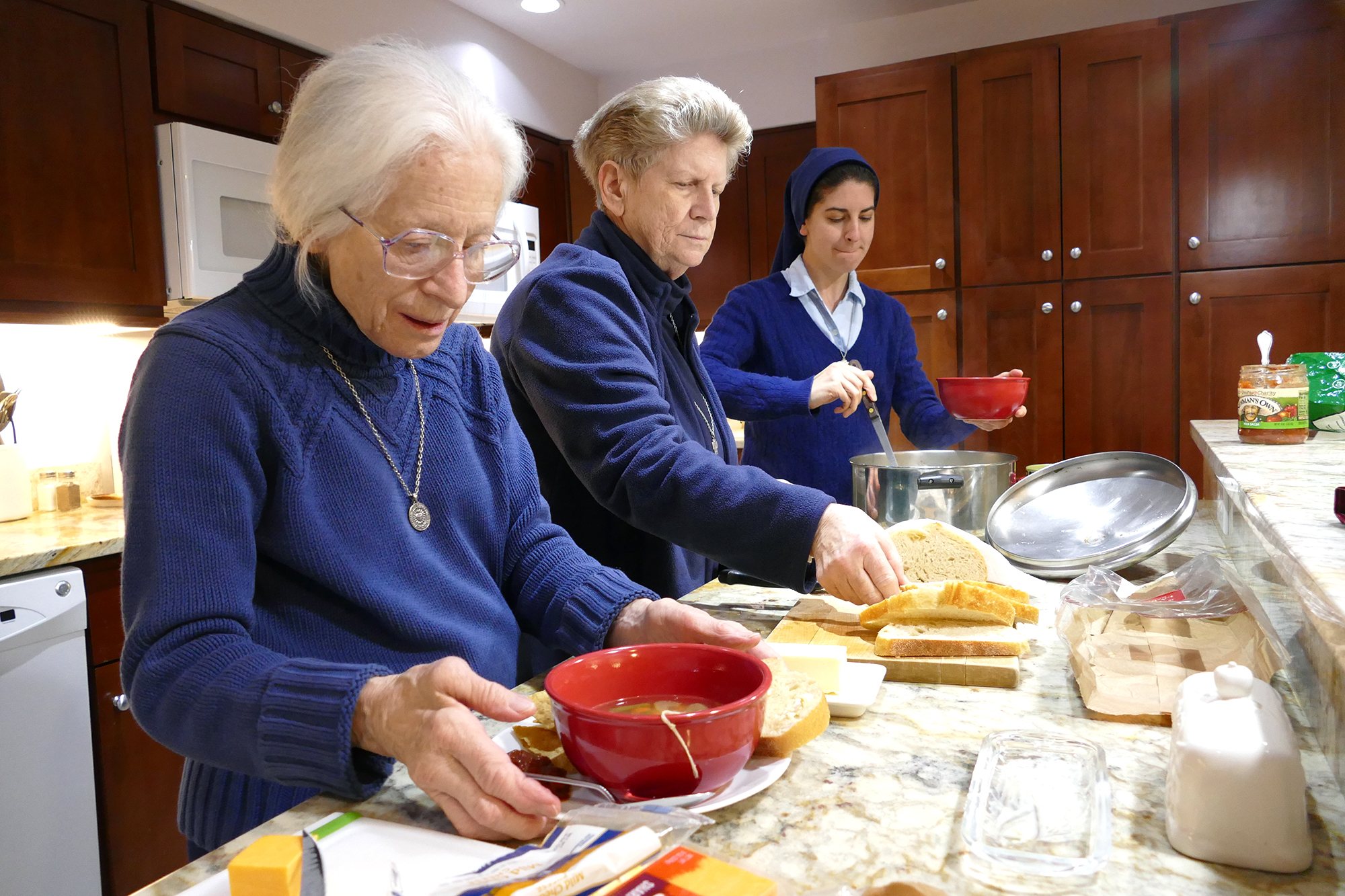 The Daughters of Charity in Chicago eat supper together every evening. On Jan. 26, 2019, Sister Angele Hinkey (left), Ann McNeil (center) and Davis served themselves after preparing the meal. (Marissa Nelson, 14 East) 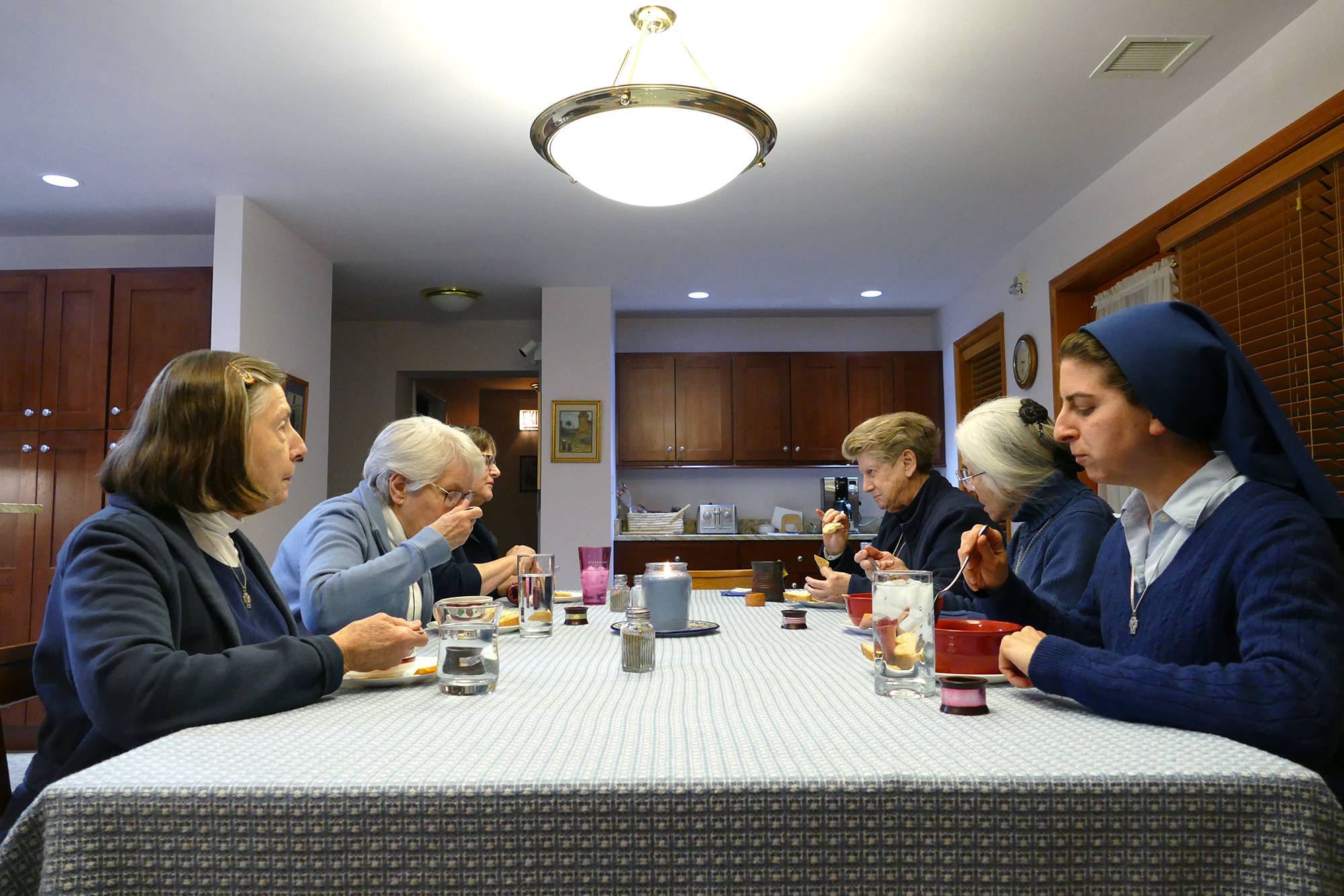 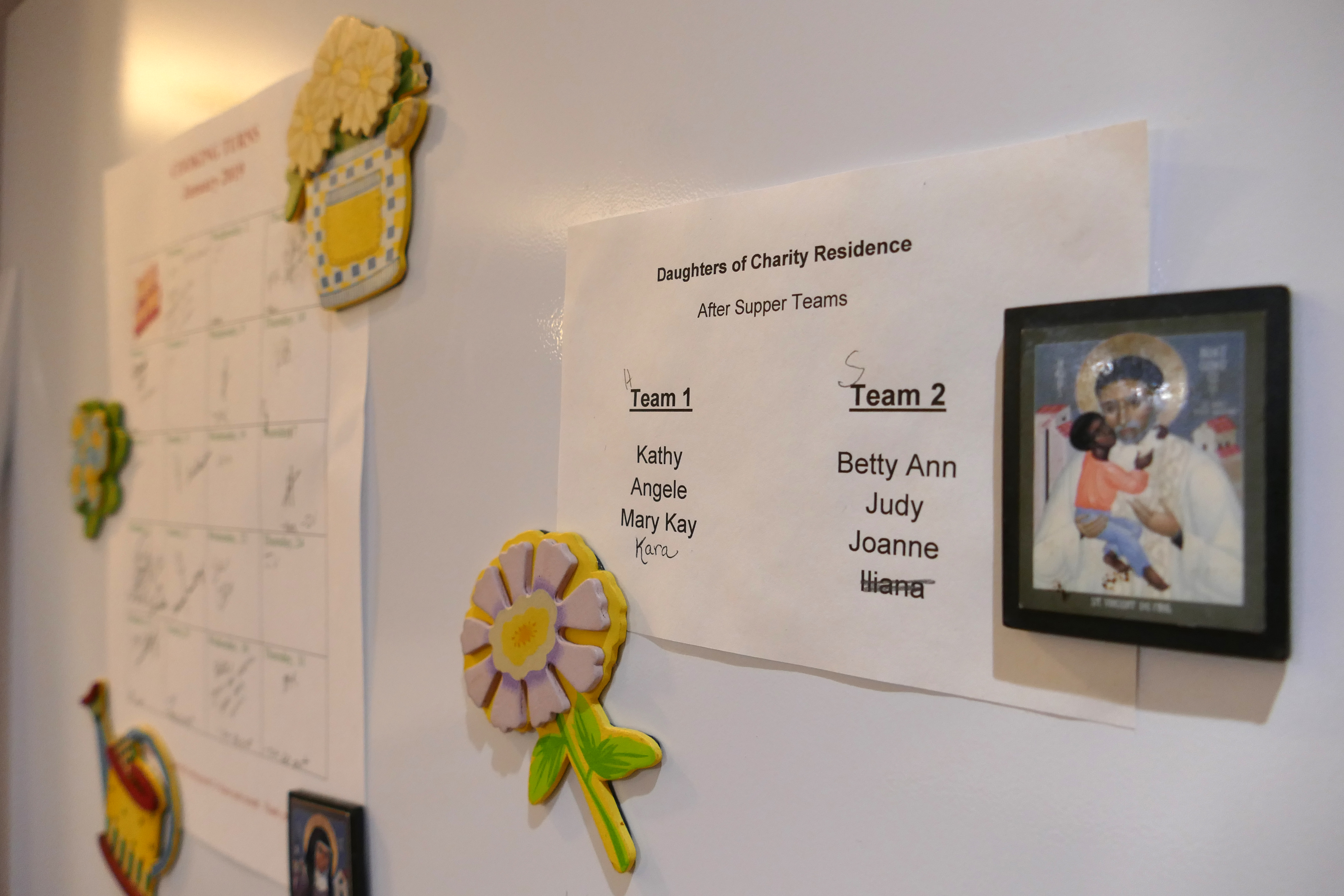 The Daughters of Charity take turns completing household chores such as cooking and cleaning. On their fridge, the Daughters have their chore assignments listed. On Jan. 26, 2019 it was team two’s turn to clean up after supper. (Marissa Nelson, 14 East) 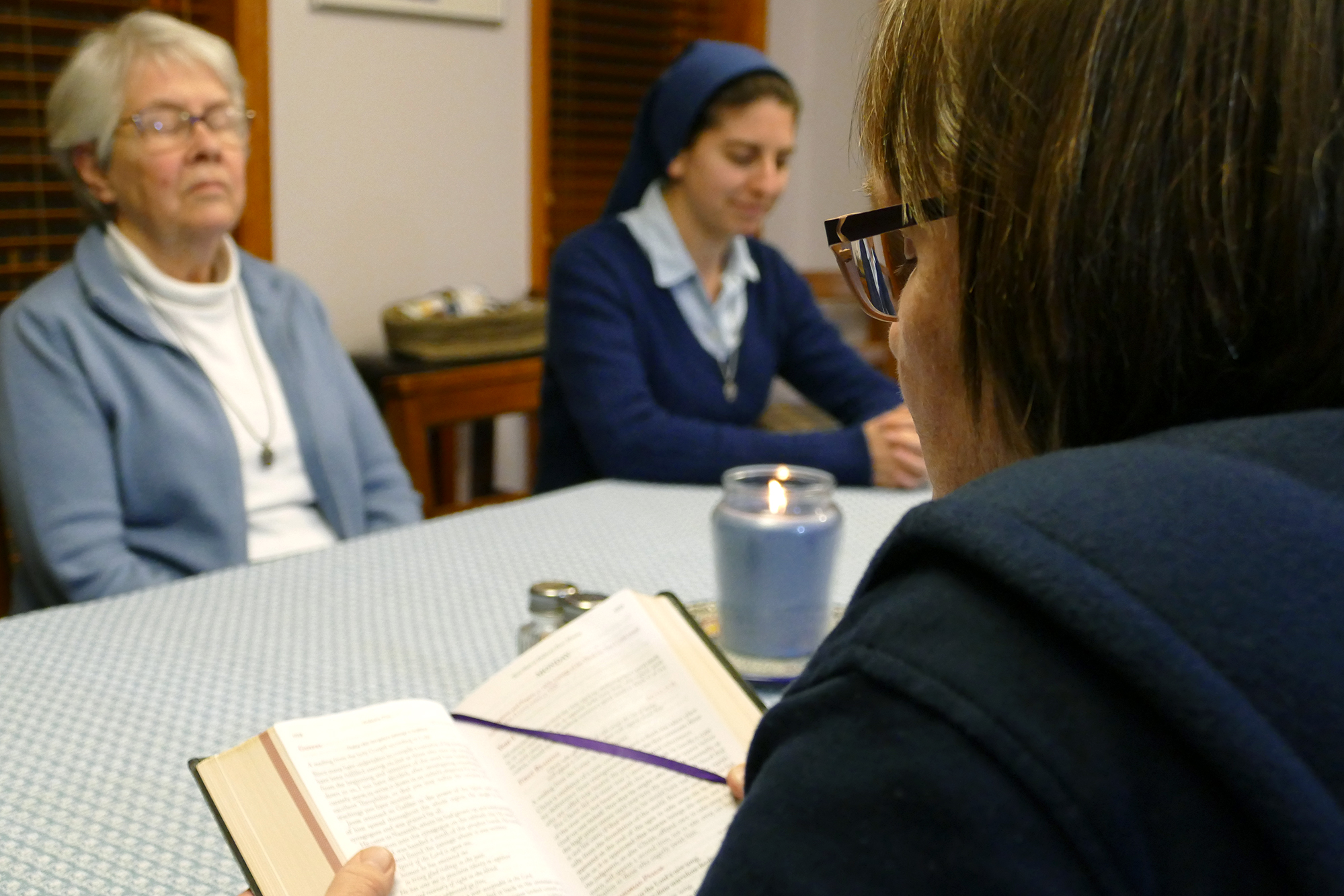 On weeknights, the Daughters pray together in their downstairs chapel. On Jan. 26, 2019 — since it was a Saturday — Vasa read gospel to the Daughters, including Warmbold and Davis. (Marissa Nelson, 14 East)