The New York Times’ Dean Baquet on the State... 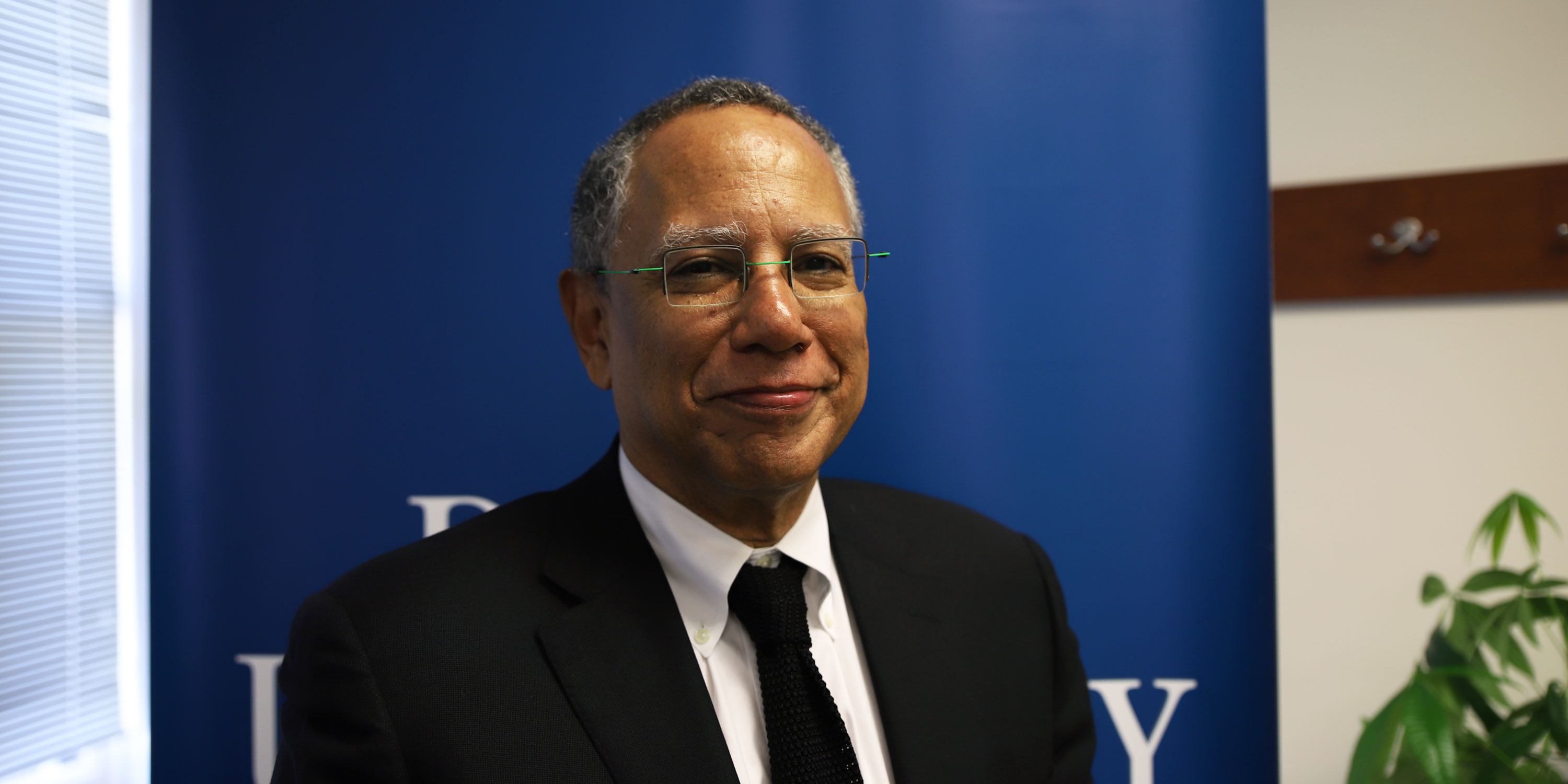 “Is everybody from Chicago?” asked Dean Baquet after being escorted into a conference room and quietly grabbing coffee from the back table while an earnest crowd hushed around him.

The New York Times executive editor has spent the last 29 years of his career in stints at The Los Angeles Times and The New York Times, but he retains affection for Chicago — the city that taught him to be a reporter. He remarks that the Loop has developed since he worked here in the ‘80s as a reporter and editor at the Chicago Tribune.

He carefully fixed his green-rimmed glasses. Although soft spoken, Baquet brings a certain sense of gravitas with him. This is not just because he is an executive editor at one of the nation’s biggest newspapers, but also how he became the executive editor.

“I still see myself as a reporter who somehow woke up one day and he was an editor,” he said. A reporting job he got dropping out of college at 19 that first looked like an accident was instead nearly destiny.

His office is located in a skyscraper in Manhattan, yet he tries to stay grounded in local news and the paper’s mission of understanding the world.

In a student panel, media interview and luncheon on April 25 honoring Baquet and alumna Lourdes Duarte with Distinguished Journalist awards from DePaul’s Center for Journalism Integrity and Excellence, Baquet spoke about his experiences and how he managed to become the most digital-focused newspaper giant while only tweeting twice.

On Entering the Field

Interning at New Orleans afternoon newspaper The Daily States-Item got Baquet hooked on journalism. He dropped out of Columbia University’s English program to pursue reporting full time. This move didn’t derail his career, though he realizes it might play out differently now. He said journalism schools with practitioners have value, but are not required to be successful.

Journalists now have to worry about “understanding technology, understanding your audience, understanding how to make a product.” Other qualities he looks for in new hires include flexibility, belief in the mission, strong writing ability and curiosity.

In the student panel moderated by Carol Marin, he said he once told an intern the best way to break into The New York Times was to leave and cut her teeth reporting from the ground up.

However, he realizes the audience might not think the process is that simple. “I don’t think we work hard enough to explain why we do things,” he said at the awards ceremony when talking about areas where The Times can improve. Documenting behind the scenes can help reporters shed more light on their process, whether it’s through social media or The Fourth Estate, the Times documentary on Showtime.

When Marin asked him about his approach interviewing Jay-Z, Baquet said he tried to probe out new revelations while maintaining respectful intentions. “There’s a difference between hard and nasty.”

To elevate the reporting of student media like 14 East, Baquet recommends occupying an empty space. “What are the things that other people are not covering?”  That question should be asked every two weeks, he said.

On Diversity in the Newsroom

Since Baquet joined the team in 2014, more than half of the paper’s hires have been women and a large percentage are people of color, he said. “When I look at the people who surround me, it’s a range of people. My goal is to be even less elitist.” This can mean including people who aren’t liberal and who might be religious. He actively went out and tried to hire military veterans. “I want the newsroom to look more and more like the country.”

According to The New York Times Company’s 2018 Diversity and Inclusion report, 49 percent of the news and opinion departments is staffed by women and 51 percent by men. A quarter of the newsroom is made up of people of color (POC), but 73 percent of newsroom employees are white (with two percent choosing not to disclose). In these departments, 78 percent of leaders are white, 20 percent are POC and three percent did not disclose.

On Being Executive Editor

“Everybody got up and walked out. It was painful,” Baquet said, retelling his perspective when paper leadership decided to cut staff and offer buyouts. “For one brief second, I thought, ‘well, I guess I should get up too.” Baquet faces less discomfort now in these positions because he thinks the institutions and their role in society are evolving.

Baquet is willing to broach any topic related to him or the Times. He calmly defended The New York Times’s plagiarism policy as having always been strict, avoided comment on former editor Jill Abramson’s book, and recalled that he signed off on a controversial border-crossing episode of “The Daily” because it tried to demonstrate the border’s vast unguarded areas to listeners.

“That’s not true,” Baquet said when a student asked him about a former Times reporter saying the paper could have reported allegations against Harvey Weinstein 13 years earlier. He said he was at the LA Times when Sharon Waxman worked for The New York Times, but it was likely that she got a tip that didn’t pan out into a full story. He said he encouraged reporters to pursue assault allegation stories after a 2017 investigation on Bill O’Reilly, even when Weinstein was one of The Times’s biggest advertisers.

Baquet has not walked back editorial decisions directly, but wrote a letter with the publisher to readers in November of 2016 acknowledging the Times underestimated Trump’s support.

As an editor, he worries about accountability, transparency and safety. “I’m always nervous about the safety of journalists who work for The New York Times,” Baquet said. “I’m not afraid of Trump tweets; it bothers me, but it doesn’t scare me.”

“We are trying to make our coverage such that people can see themselves in The New York Times,” which Baquet believes is happening through hiring a more diverse staff. “There was a time our readership skewed really male and I think that is because we were dominated by men.” Now that the paper has more senior women editors, Baquet said “it’s no accident that women read us now.”

The paper has tried to be accessible to students on college campuses and expanded its youth features to include the “This is 18” series and a place for young contributors in “The Edit.” The digital subscription and ad revenue has increased readership in West and Central areas of the country. The company reported 4.3 million subscribers in the fourth quarter of 2018, but Baquet wants to expand further. “I do not want The New York Times’s audience to only be affluent Americans.” 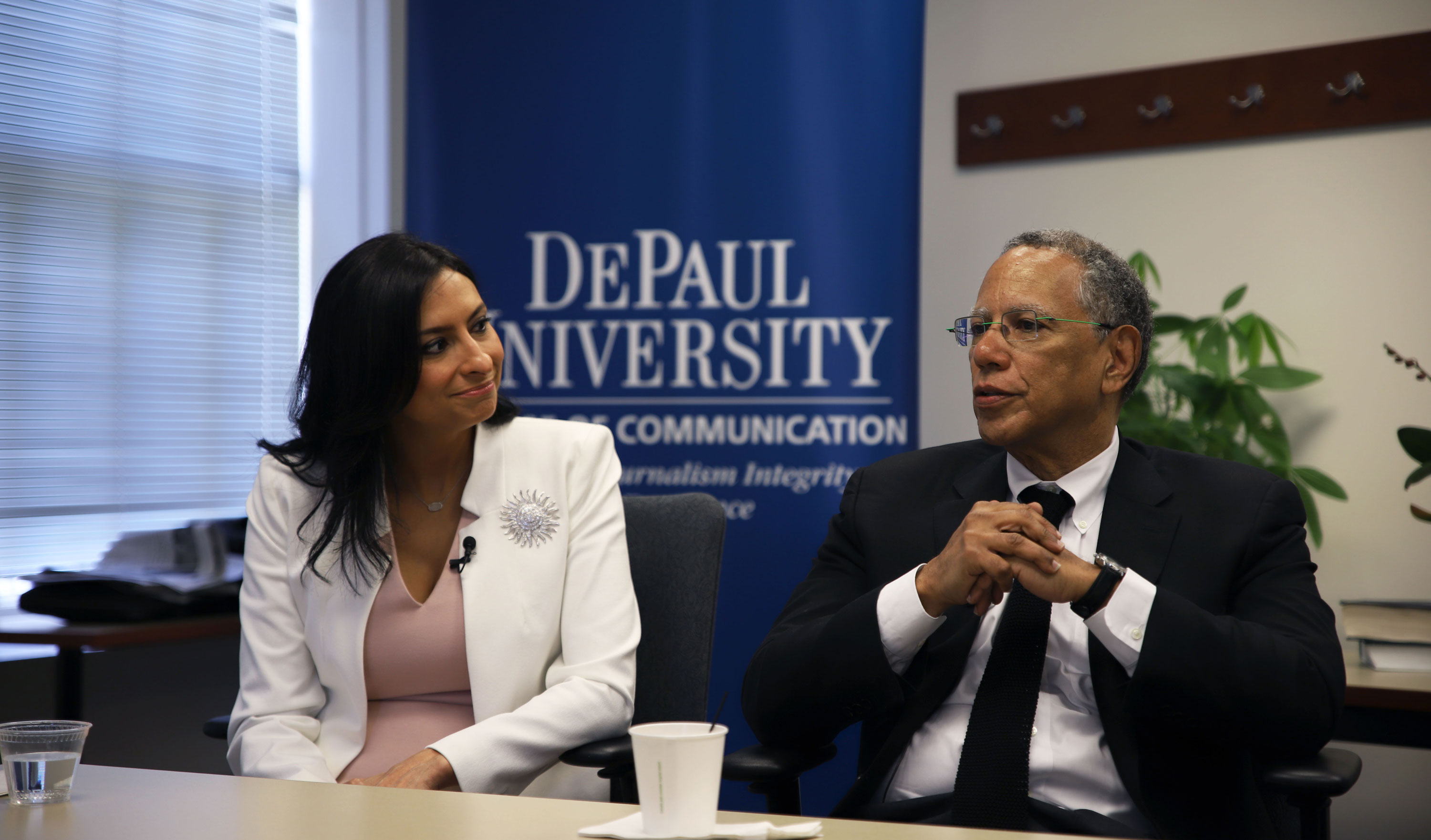 Before the panel officially started, Baquet prided Chicago for having some of the best local journalism, especially in regards to television. The New York Times simply cannot go in depth about everything everywhere — they can only cover Chicago at a surface level.

He paused, then said he predicts most local newspapers to go out of business within five to ten years. Some papers, like The Times-Picayune/NOLA.com of New Orleans where his brother Terry is Director of Community Engagement, can be purchased by wealthy residents, but Baquet is mainly nervous for poor cities. “I don’t know if there will be a model to cover schools.”

He doesn’t have the answers to stop local news from receding, but believes the next generation of reporters, editors and producers will need to change the local model to make it indispensable. Journalism, he argues, is so necessary to live one’s life, that people will be willing to pay for it.

“You have to figure out what’s the newest iteration, what’s the stuff that people have to know to survive and to live fulfilled lives,” Baquet said. The physical newspaper use to tell people about the weather, if their team won, what the stock market was, but not anymore.

Looking out from the podium at the packed awards reception at the Union League Club, Baquet spoke of gratitude, the future of media, and welcomed more questions.

“If you want people to pay for what you do, you really gotta have something that no one else has.” Baquet pushes the inevitable future closer to us by making it a focus to think of new ways technology can better serve news, from a new TV show to augmented reality stories.

“You’ve gotta figure out the difference between tradition and habit,” Baquet said, encouraging the journalists in the room to adapt to keep their crucial work alive. “My main job, to be frank, is separating those two.”

Though distrust in the media is polled to be rising, Baquet doesn’t think people hate their local papers and TV stations. The digital era, with all of its advantages for making journalism accessible, has removed any sort of page order and provided virtual walls over which people can shout heightened perspectives. He reminds the students that “Twitter is not the world,” and it can be a mistake to let it change your reporting approach.

After more than 40 years in the thick of journalism’s constant obstacles and evolutions, Baquet still thinks it’s the most fun job he could do, and it’s improving. If he was a kid growing up in New Orleans now, he would have access to more than just two newspapers and three TV stations.

“Journalism is better today than it ever was. It’s not even close.”

Correction: An earlier version of this story said that Baquet worked at the Chicago Tribune in the ’90s, but he worked there from 1984-1990. The story has been updated to reflect this.