Camp, but Make it Fashion

Cuba: The Place I Once Called ..

Camp, but Make it Fashion 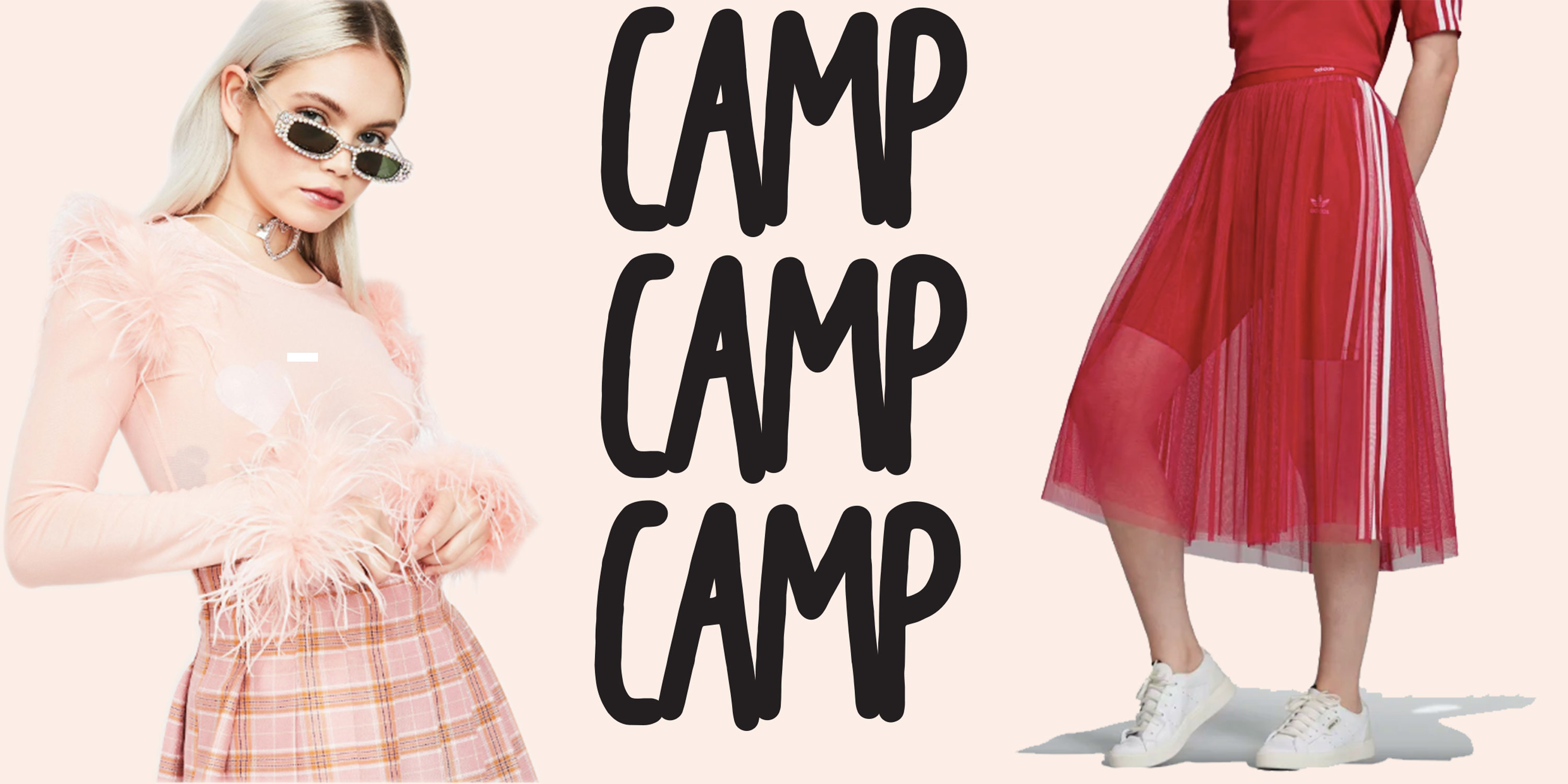 Every weekend for the past three years I would drive past the Gucci store on Michigan Avenue with my parents, and every weekend I would hear the same remarks, “Oh my God, that is so ugly! Who would even wear that?” I always smile and shake my head in disagreement because taste is subjective, but also because I kind of understand where my parents were coming from. The clothes are always gaudy, covered in excessive glitter, gemstones and lettering. My parents think the clothes look like they were made for 5 year olds and should be worth maybe 50 dollars instead of over 500 dollars.  To be honest, as someone interested in and understanding of fashion, I wish I could completely negate their thoughts, but the trend of fashion houses pursuing the bizarre and unique in their garments instead of sticking to tradition is growing. That is not something that a lot of people are used to or understand, my parents included.

Gucci, among other high fashion brands, has been swaying away from the traditional cuts and designs of couture and towards wild patterns, bold prints and everything weird. And what is this called, exactly? Camp.

Camp is something the fashion industry is rapidly embracing, but there seems to be a disconnect between consumer and producer. Baby boomers like my parents aren’t the only ones who don’t understand the camp aesthetic. In fact, a lot of Gen Z and Millennials don’t either. I briefly explained camp to Keeley Carducci, a 20-year-old college student, as an expression of extravagance and glamour in an almost playful way. She said she didn’t really get what it was until I explained it more thoroughly.

“To be honest, I didn’t really know what you meant by camp until you explained it to me, which is kind of problematic considering that the fashion world is incorporating it so much into runway and ready to wear,” she said.

The issue with camp isn’t that it is difficult to grasp. It’s that it is not discussed enough in mainstream media for people to realize they see and interact with it all the time. However, the 2019 Met Gala’s theme of “Camp: Notes On Fashion,” propelled camp into the mainstream.

The Met Gala is a fundraiser for the Metropolitan Museum of Art’s Costume Institute held annually on the first Monday of May. This event is claimed as the “Oscars of the fashion world” by Vogue. Every year, hundreds of celebrities, designers and artists are invited to the fundraiser, all wearing luxurious couture clothing based around the ball’s theme.

The theme “Camp: Notes On Fashion” is based on Susan Sontag’s essay “Notes On ‘Camp.’” In this essay, Sontag explains what camp is by listing out 58 “notes,” which are essentially guidelines that embody the essence of camp. One of the most integral points Sontag makes is that camp is a sensibility that has not really been discussed or explained. It is not an idea. The difference between a sensibility and an idea is that sensibilities are more living and breathing. They exist to embody and display the subjectivity of things, not to define them or to create a meaning, which is the purpose of ideas. A sensibility in itself is very effervescent and alive, not hardened into a definition. With that in mind, here are a few of Sontag’s listed notes that allow one to truly understand what camp is:

So camp isn’t just crazy colors and designers doing too much to make a point. Sometimes, it is just designers embracing extravagance and glamour for the fun of it. This is evident through Gucci’s Dapper Dan collection. It is evident in Viktor & Rolf’s Spring 2019 collection, full of tulle and bold statements. But it is also evident in clothing that is more readily available to students; a lot of us just haven’t realized it because we think of camp as only the most absolutely crazy things that high fashion usually expresses.

Many brands popular with students take popular themes and materials that were popular in this year’s Met Gala and incorporate them into their collections in ways that are much more wearable. One of the most recurring materials seen on gowns and tops was tulle. Adidas Originals has a tulle skirt that isn’t as bold as Emma Roberts’ pink Giambattista Valli gown, but it still takes a campy fabric and makes it more accessible and mainstream.

If, like me, you’re obsessed with Kendall and Kylie’s marabou feather galore, you’ll be happy to know that you too can fulfill your feathery fantasy, just a little more low key and maybe not Versace. Dolls Kill is well known for their bold, extravagant looks, so it isn’t really a surprise that they have many campy tops and pants. This sheer feather top is a good amount of extra without doing too much.

Popular footwear and athleisure brand Nike also incorporates camp into its products. Take a look at this Jordan “Why Not?” The combination of multiple contrasting textures and colors is reminiscent of the more wild and daring side of the Met Gala that many celebrities pulled their inspo from. Think Regina Hall’s Dapper Dan dress.

Mandius Muckler, a 19-year-old student from the Chicagoland area, said he thinks that camp is a sweet spot between trying too hard and giving a ‘f—k you’ to people who don’t understand fashion as an art.

“I love [camp]. It’s fun to see to what extents fashion can be pushed,” Muckler said.

Muckler said that he finds himself embracing camp sometimes. He does this by keeping an almost ironic, mocking sense of style, mainly seen through the dad shoe trend.

“I’ve always been big on the OG Yeezy 700’s and 500’s and I made sure to buy both when they first came out, regardless of what my dad had to say about them. There were definitely some words to be said about them when they arrived, too.”

Muckler went on to explain that dad shoes like the Yeezys were seen as outrageous and corny when they first came back into fashion, and still are by many people. He also brought up an interesting point about dad shoes. Dad shoes are generally defined as big, chunky sneakers that were popular in the’80s but then completely shunned by everyone in the fashion world up until recently. Think really old Nike Monarchs, but exaggerate them and make them bigger and clunkier.  Now, they are almost mainstream and accepted by most younger people, which is evidence of Camp making its way into the style and lives of people in a more accessible way than high fashion and ultimate extravagance.

That being said, Muckler realizes that not all camp is as easily accessible or seen as acceptable as dad shoes and oversized sweatshirts, especially to people who are not into fashion. “I think it is important to understand that if you’re on the outside of the ‘fashion community’ looking inwards that what people wear to things like the Met Gala are not what people wear every day.”

He believes that people take extreme forms of camp, like the Balenciaga button up shirt that is sewn onto a t shirt, or extravagant dresses and think that this form of camp is what people into fashion fill their closets with exclusively. However, these pieces are statements that have a specific time and place, very much like Gucci’s exaggerated jackets and blinged out shoes.

“I think people are quick to hate something because of how abnormal it is, but when it’s worn right, it should be appreciated.” Muckler said.

And I can’t agree more. Camp is about embracing extravagance and the glamour of life and translating it into fashion. This can be in large amounts, as seen in high fashion, but it has also infiltrated itself into the mainstream through trends such as dad sneakers, oversized clothing, and faux fur thrown onto almost everything you could think of owning.

Camp is something we see and participate in because it is what is trendy in the industry. Whether we like it or not, we are interacting with it when we buy clothes or even appreciate them. As consumers of any type, it is important to know what it is we are interacting with, and right now in the fashion world, that is camp. From something that was widely judged for being crazy to something that has found its way into many of our wardrobes in the subtlest of ways, camp is powerful and something worth exploring and understanding.

The sensibility of camp is a phenomenon, and one that we do not have to fear if we learn to appreciate and understand where it comes from.