‘The Great Mouse Detective’ Dives into... 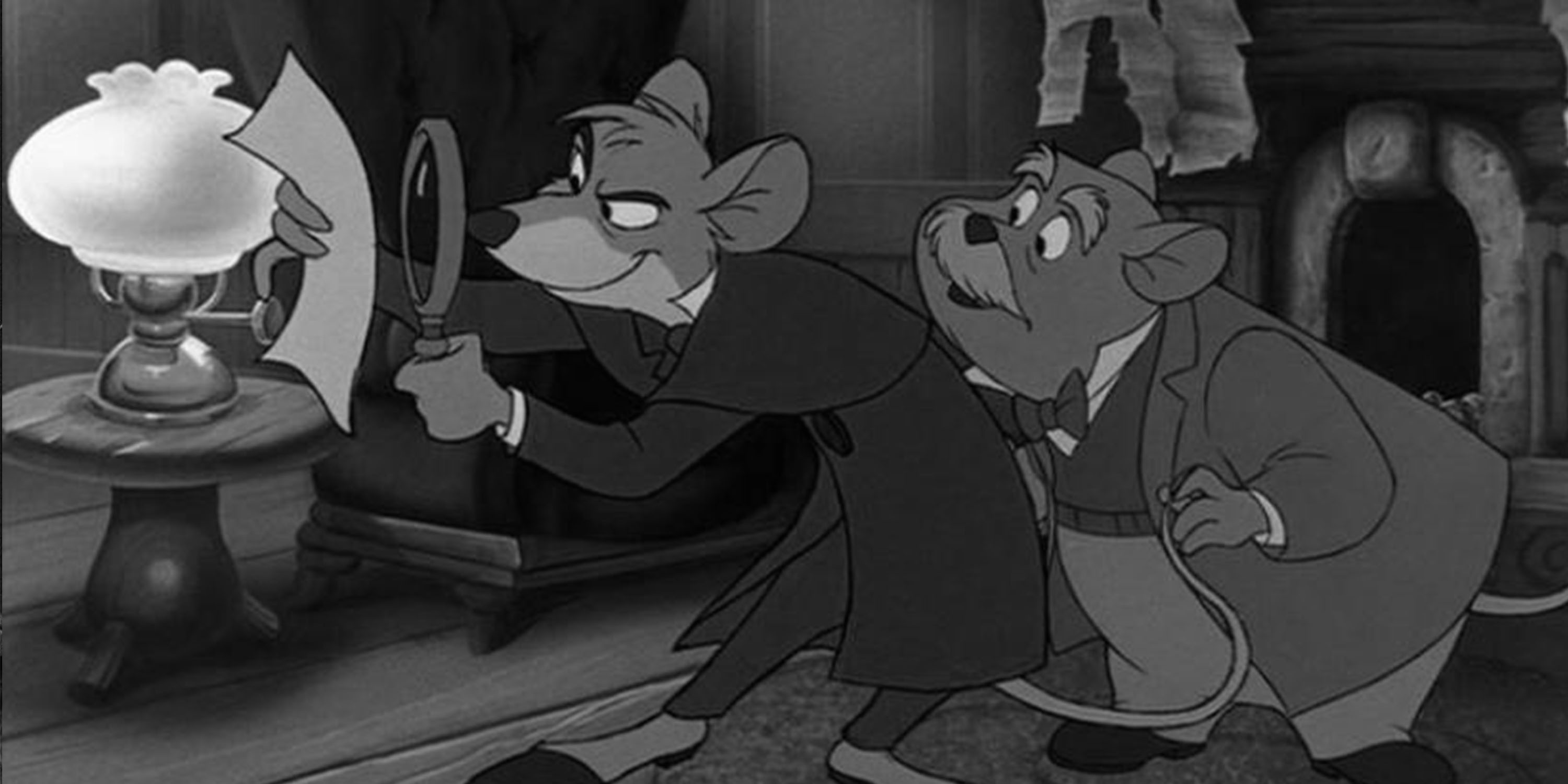 Sherlock Holmes is a mythic figure. He’s the most portrayed movie character, according to the Guiness Book of World Records, with 70 actors playing him across 200 films. He’s made his way to the small screen as well. Stephen Moffat and Mark Gatiss’ 2010 adaptation, called Sherlock, places Holmes in twenty-first century London and gives him the opportunity to use modern technology in his cases. The lesser-revered Elementary, created by Robert Doherty, is a rehash of the criminal investigation show with Holmes and Watson at the center (or centre, I should write, as I am talking about a Dignified British Thing and should write so).

There are too many versions of Sherlock Holmes out there, and only one that is worth your time.

The Great Mouse Detective imagines a Sherlockian-esque mouse, named Basil, solving crimes all around London with the help of his assistant, Dr. David Q. Dawson. It’s based off the children’s book series Basil of Baker Street, by Eve Titus.

We don’t have time to unpack everything about The Great Mouse Detective, but here are some basic facts to give a basic understanding of this remarkable film. It’s an important film in the Disney canon, saving the company after the failure of its predecessor, The Black Cauldron (long story short, after the death of Walt Disney, the company produced a series of lesser-known films and flops from 1970-1988. This era is commonly referred to as “The Bronze Age” of Disney, or the fan-dubbed term “Dark Era”). It was adored by critics, specifically Roger Ebert, who praised the animation and called the film “a lot of fun.” It practically saved the company, giving them the ability to propel into their Renaissance.

But, it’s aged into obscurity. Unlike the other films of the Dark Era of Disney, the success of The Great Mouse Detective aids its slip from our collective pop culture memory.

“But Madeleine!” I hear you, the amazed reader say, “Will you get to the point already? You told me about the commercial and critical success of this film, why do you think it’s so great?”

Well, my dear reader, it comes down to four things: the run time, the complex mouse society in London, the mice in general, and the crowning jewel, the movie’s villain.

We’ve all sat through a needlessly long movie. From the 238-minute run of Gone With the Wind, to the 201 minutes of Lord of the Rings: The Return of the King, there is a cesspool of indulgent films trying to capture my very limited attention span.

I don’t care how good your film is. If it’s over two hours and not a musical, it’s basically asking to be background noise as I work on other important things.

But, The Great Mouse Detective clocks in at a wonderful 74 minutes, hitting all the beats necessary to make a compelling detective story. Within the first five minutes our inciting action happens, propelling the story forward. At the seven-minute, 14 second mark, Dawson and Basil meet for the first time. Five minutes later, the villain is introduced. For any parent who sits through this with their child, it’s a delight to see the film move along at a quick pace without indulging itself in the “brilliance” of Sherlock Holmes. We already know and accept that this mouse, Basil of Baker Street, is smart. For Christ’s sake, he’s a detective. The rest of the movie hits beat after beat, never stopping to rest and explain itself. It is the art of showing, and not telling.

One of the most charming aspects of the source material for The Great Mouse Detective is how much thought is put into the mouse society of London (which I shall refer as Mouse London so I don’t have to constantly write mouse society of London). Mice live in tiny furnished homes, wear three-piece suits, own tiny mouse guns, it would be charming if I wasn’t concerned about the fact that mice have guns in this world.

These mice have a monarch, named Queen Mousetoria. They have bars, shops, restaurants, and schools. They coexist with the human world above them without any issues. The only other animals that seem to be aware of their presence are other animals, such as domesticated dogs and cats. As Ratigan — the mouse equivalent of Moriarty — lists his demands as new supreme ruler of England, he demands a tax on parasites and spongers (the elderly, infirm, and children). These mice have a fully functioning government system with taxes, insinuating that there is a mouse minister of finance, as well as a mouse Parliament. There is a mouse Prime Minister. So, when World War II eventually happens, the mouse equivalent of Winston Churchill will rise to fame.

In other media with mice (Stuart Little, Ratatouille) the mice are mice. They exist as mice do in our world. Sure, they may have a society, but it isn’t as complex and rich as the one that exists in The Great Mouse Detective. The mice not only coexist, they thrive. It’s exciting to think about all of the exciting possibilities within the future of this culture. How does the human society affect the mouse society (for instance, do the mice experience a similar economic issue England does when Margaret Thatcher becomes the PM)? It’s also troubling to think that the mice will get so advanced in their technology, that they may become more advanced than us?

Mouse London keeps me up at night.

When we take humans out of the equation, the more exciting our stories can be. Ideally, animals have no concept of race and gender, so there’s a lot of exciting ways they can be utilized in stories. For instance, look at Disney’s 2016 hit Zootopia. The film uses the vast species of animals all around the world to discuss the nuanced topics of race and privilege.

The animals in this story set the tone for the gritty, noir-esque world Basil has to maneuver. The movie is filled with mature subject matter, like kidnapping, murder, alcohol, and even a striptease. But since mice are the main inhabitants, they aren’t held to the same standards as humans. I will explore this phenomena through the striptease scene.

About halfway through the film, Dawson and Basil find themselves at a seedy bar near the East End of London as they chase a lead. The patrons aren’t terribly happy with the entertainment, they boo multiple acts off the stage (even calling an octopus an “eight-legged bum!” What a burn!). To appease them, the pianist starts to play a song called “Let Me Be Good To You.” A female mouse comes out and begins to sing it. Her power over the crowd is magical, they instantly stop to watch her. When the song begins to climax, the mouse, um, strips into a more revealing costume. There is a fair amount of mouse cleavage.

The song itself doesn’t help either. It’s not a song to liven spirits, such as “Oom-Pah-Pah” in Oliver!, it insinuates much more. The more raunchy lyrics state:

“Hey, fellas/I’ll take off all my blues!/Hey, fellas/There’s nothin’ I won’t do/Just for you.” She doesn’t state she’s going to take off her clothes or do something explicitly naughty, but she wears a blue costume. The phrase

“I’ll take off all my blues” has a new meaning to it now.

Obviously, this scene is very inappropriate for a children’s film. But Disney got away with it! BECAUSE MICE WERE STRIPPING. An official statement from the animators reads, “the segment was a Cabaret song and harmless in lyrics, and because the character animated singing it was a mouse, not a human, and thus not questionable.”

I love Disney so goddamn much.

Every Sherlock needs a Moriarty. Basil of Baker Street is no exception. Lovingly placed above his mantel is a portrait of Ratigan, the world’s greatest criminal mind. He is also the best part of this film.

He’s a criminal mastermind with an impressive resume, referenced in the song “The World’s Greatest Criminal Mind.” And yet, he takes the time to record a goodbye song as he constructs a convoluted Rube Goldberg machine to kill Basil.

He knows he’s brilliant. He knows he’s handsome. His fatal flaw is his lack of empathy, which just makes him a better villain above everything else. Whenever someone dares to question his breeding (he is a MOUSE, not a rat), he goes into a rage, often killing whoever dares to call him a rattus.

As a Sherlock Holmes nerd, I’ve never identified as a Moriarty. But, I identify as a Ratigan. His flair for the dramatic, his long drawn-out monologues as he rambles his thoughts, his perfectionism, his TWO MUSICAL NUMBERS, he is the worst version of myself. One with no self-consciousness or depression holding themselves back from achieving their highest goal. We both punish ourselves when things don’t occur the way we want them to, as seen when Ratigan finds out Basil is onto him.

“How dare that idiot Basil poke his stupid nose into my wonderful scheme and foul up everything! Oh, I can just see that insufferable grin on his smug face.”

I think I would be more like him if I ended up working in government.

Ratigan also has the biggest star attached to his name. He’s voiced by the great Vincent Price. All of the characters are overshadowed by Price’s charismatic vocal quality, walking the line of sinister and silly. One moment, Ratigan dances with his henchmen. The next, he murders one of them in cold blood when they call him a rat. It’s a difficult part to carry — one where the actor needs to be equally ruthless, cunning, vile, charming, funny, and frivolous. Hamlet has nothing on the complex characteristics of Ratigan.

“And honey, you should see me in a crown.”

How has this gem of a film slipped through our fingers? We hail other films of this Dark Disney Era, such as The Aristocats, Winnie the Pooh and The Rescuers, but fail to recall this critical and commercial success. Hell, the two men who helmed The Little Mermaid and Aladdin directed this film, proving their worth and value to the company.

Instead, why don’t we appreciate the charm, wit and loveliness of The Great Mouse Detective?