City Fitness: Where to Go, Wha..

Review: Taking Back Sunday Rocks the House Of Vans

A Window of Freedom and Accept..

Review: Taking Back Sunday Rocks the House Of Vans 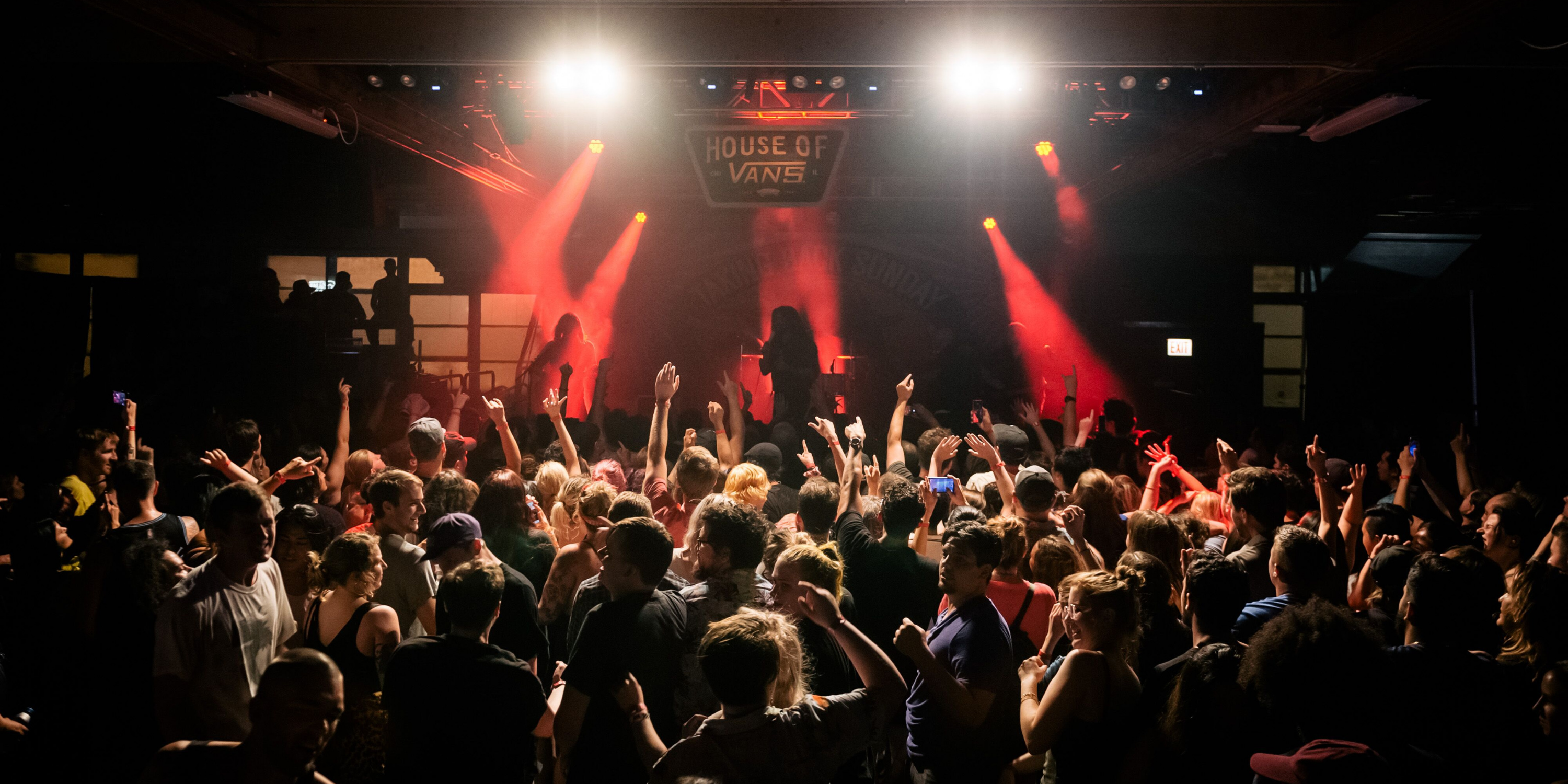 Honesty is an essential component of any live concert review, so I’ll be honest with you right off the bat: I didn’t plan on seeing Taking Back Sunday (TBS) at the House of Vans on Saturday, July 13. A goal of mine for this summer has been to prioritize my time with family and friends. When I was confirmed to cover TBS on the same day as my younger cousin’s high school graduation party — a function that I anticipated would last all day — I grudgingly abided by my commitment to family time and completely wrote off being able to see the alt-pop punk band on their 20 year anniversary tour.

However, my family said our prolonged goodbyes much earlier than expected, and suddenly I was flying down the Chicago Skyway in hopes that I would be able to catch Taking Back Sunday before 10 p.m., when they were scheduled to take the stage at the West Loop warehouse turned skate park/music venue/art gallery that is the House of Vans.

Luckily, I did much better than that. By the time I checked in and grabbed myself a free Goose Island beer (yes, all Vans House Parties include free beer for all 21+ guests), the second opening band, indie rock five-piece Rozwell Kid, had barely begun their second song.

My expectations for the opening acts at a free show were low, but Rozwell Kid convinced me I should have set my bar higher. Their 45 minute set was infused with high energy and catchy, simple choruses that made it easy for both unfamiliar listeners and long-time fans to sing along. My only gripe was that guitarist/vocalist Jordan Hudkins’s attempts to engage the crowd were a bit lengthy and off topic, which elicited more than a few, “shut up and play some music already’s” from impatient fans.

Unlike many indie pop rock bands I’ve seen live, each of Rozwell Kid’s songs was distinctly different from the last, which kept my attention as I wandered around the venue. I danced alone at the top of the VIP section, which features a private bar and a small lounge with oversized bean bag chairs at the top of a fire escape-esque staircase fitting of the venue’s industrial warehouse vibe. As other attendees lounged I jammed out and bopped my head as I inspected art displays from local artists in a small alcove in the back of the venue. I was pleasantly surprised at how much room there was to drift through the crowd and watch a few songs up close before making my way back to the bar. 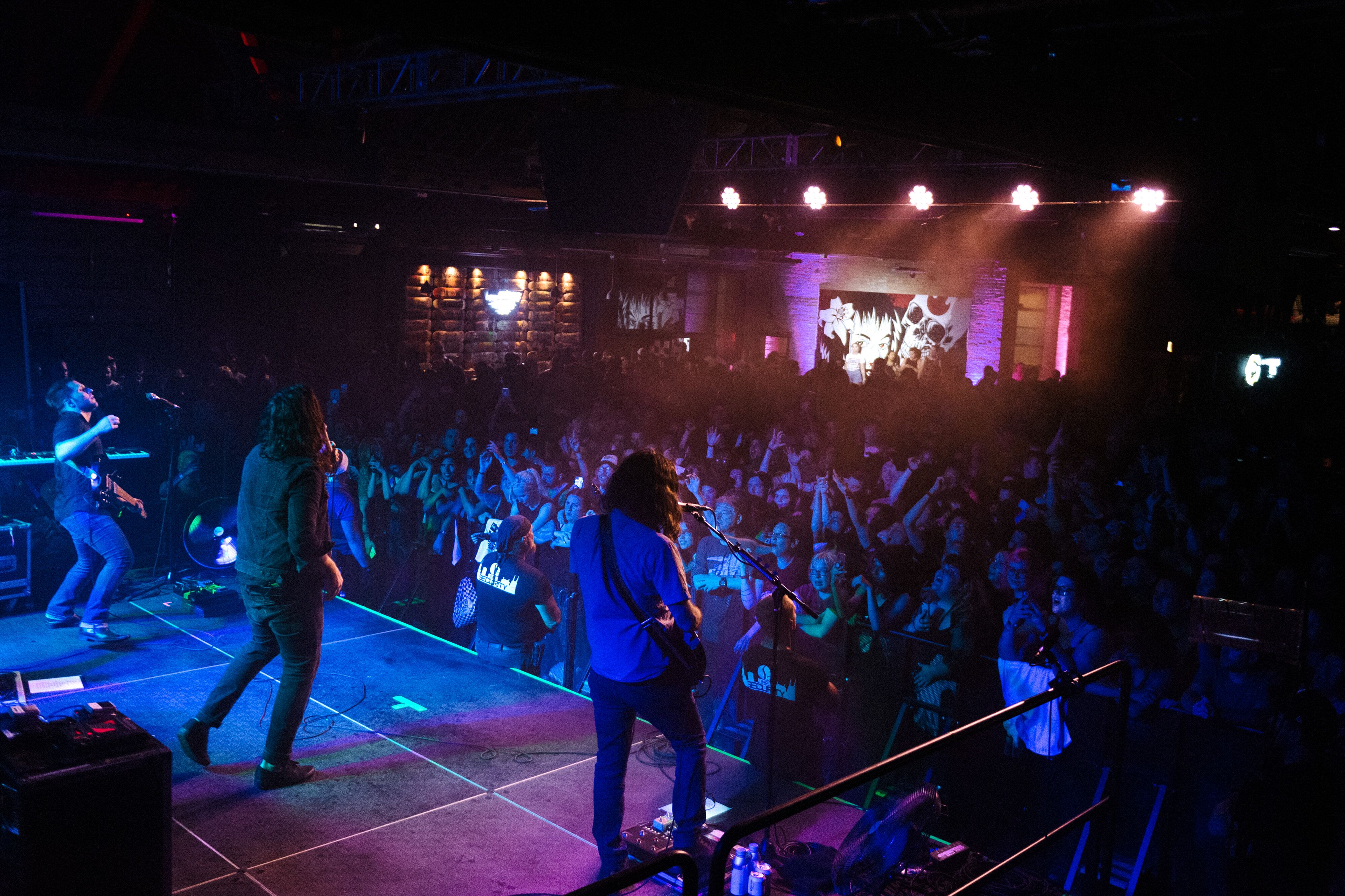 Catching a concert at House of Vans truly is more than seeing a performance at any average music venue. There’s a strong focus on visual artists, nooks and crannies to explore, chill areas and lounges to relax if standing during an entire concert isn’t your thing and tons of freebies and giveaways. I can’t think of a better atmosphere to watch Taking Back Sunday tear down the house (of Vans).

I think it is worth noting that if you want to check out any of the free events at House of Vans, it’s crucial to arrive early. I was fortunately able to bypass the line of 50 or so people who were stuck outside the venue, waiting for other fans to clear out so they could replace them, but most probably won’t be so lucky. Plus, most fans who arrive early are awarded with free Vans merch such as backpacks and clothing.

Also, due to the lack of tipping I observed, I think I’m obligated to mention that if you attend a free event with free beer, you should be tipping your bartender at least a buck or two per drink. 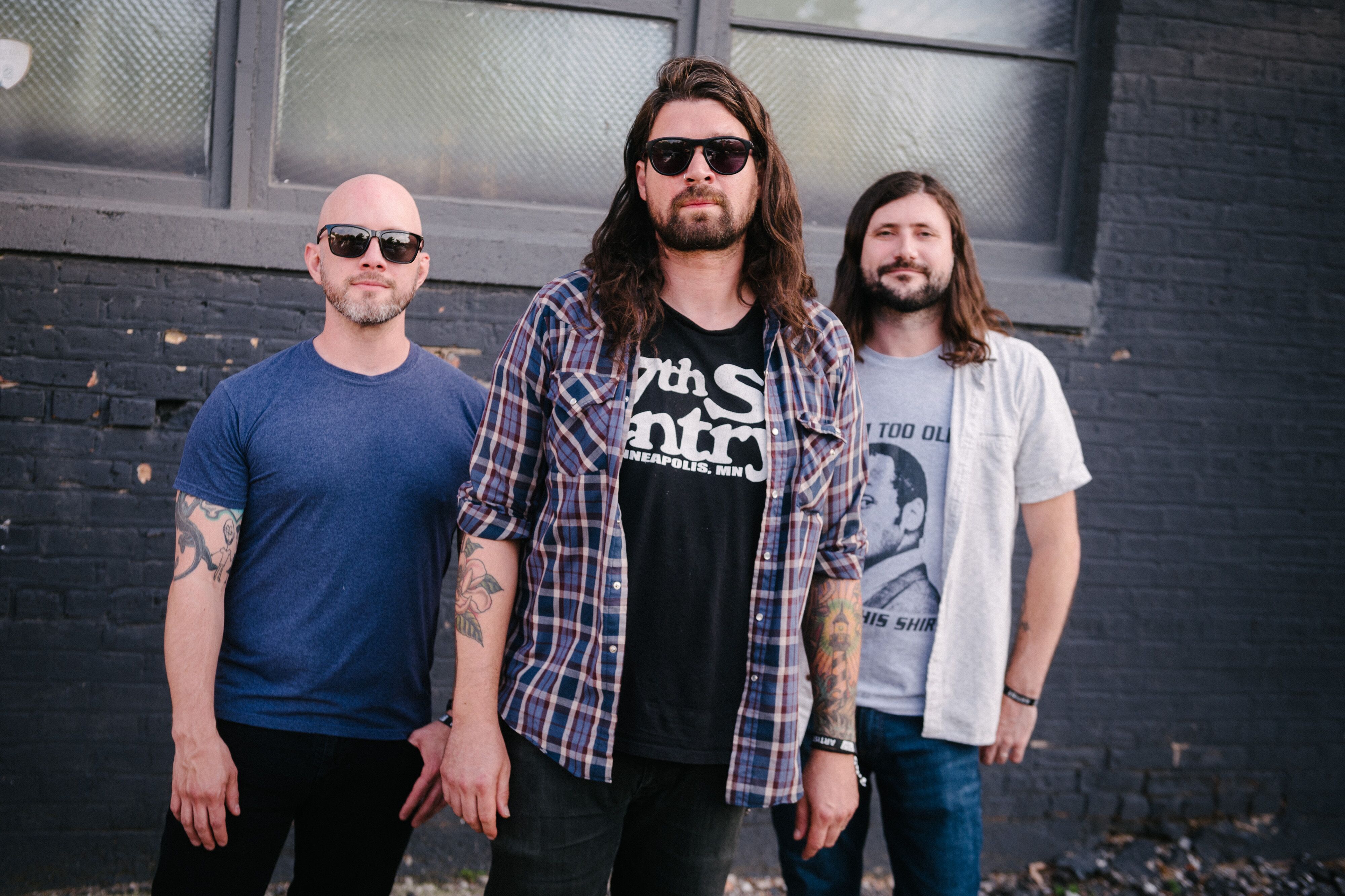 My relationship with Taking Back Sunday formed organically and without any effort on my part. I can’t recall when I first heard any of the bands standout singles — “MakeDamnSure,” “You’re So Last Summer and Liar (It Takes One To Know One),” just to name a few — but when I passed by their set at Riot Fest in Humboldt Park in 2013, I was already familiar with the band and their alternative emo rock sound.

Seeing them live, however, was an entirely different creature.

I recall being taken aback at how much a pop punk band could command their audience to move. My attempts to make my way closer to the stage and find a stationary spot were impossible as I was constantly being forced to navigate push mosh pits and jumping, singing fans. I vowed that when I returned home, showered the Humboldt Park dirt off and finally ate a meal that wasn’t overpriced fried festival food, the first thing I would do was dig through Taking Back Sunday’s discography that, at the time, consisted of five studio albums.

I didn’t familiarize myself with anything other than a few of the band’s better known singles, but that didn’t stop me from routinely checking out their set every time they’d make a Riot Fest or Warped Tour appearance over the next few years. I considered myself lucky to have such an enjoyable, passive relationship with this band and thought I had grown familiar with their high-energy shows. However, nothing prepared me for their incredible House of Vans performance.

Taking Back Sunday’s ability to energize their crowd at a large outdoor festival is only amplified inside a significantly smaller venue like House of Vans. 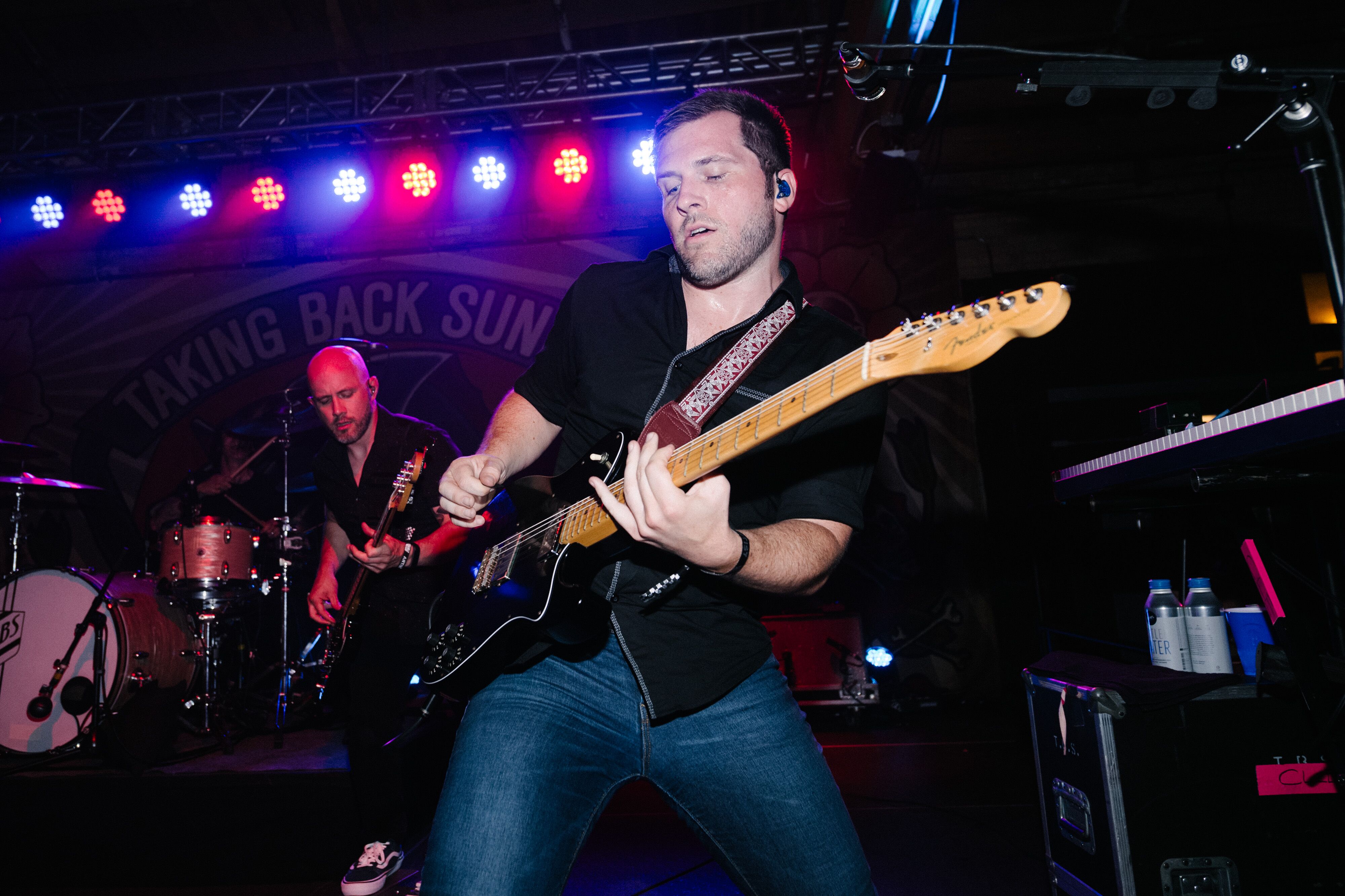 The first word that comes to mind when I picture the small pogo-pit in the middle of the indoor skate park at House of Vans is inclusive. Fans of different ages, genders and body types shoved each other and jumped around off-beat to the tune of their favorite pop punk anthems about young love gone wrong. As I sang/yelled along, complete strangers who also knew the lyrics would catch my eye and smile, or give me a quick one-armed hug or sing directly to me as we shouted the words to 2002 pop-emo tracks. Clearly, Taking Back Sunday had been the soundtrack to many of our angstiest, saddest teenage moments, and the waves of nostalgia hit the crowd nearly as hard as current frontman’s Adam Lazzara’s clean vocals.

The friendly atmosphere only added to the quality performance that Taking Back Sunday put on. Their set included nearly all hits — not a difficult feat, considering the band has released seven studio albums — and each track sounded polished and well-rehearsed. Lazzara’s anecdotes perfectly complemented each song without overbearing the music, and the band’s predictable finale, “MakeDamnSure,” drove the crowd wild. As I found myself pushed from the front of the pit to the second row from the stage, I quite literally bumped into a friend who had never seen Taking Back Sunday before, and his look of pure astonishment was the perfect ending to an incredibly fun show. 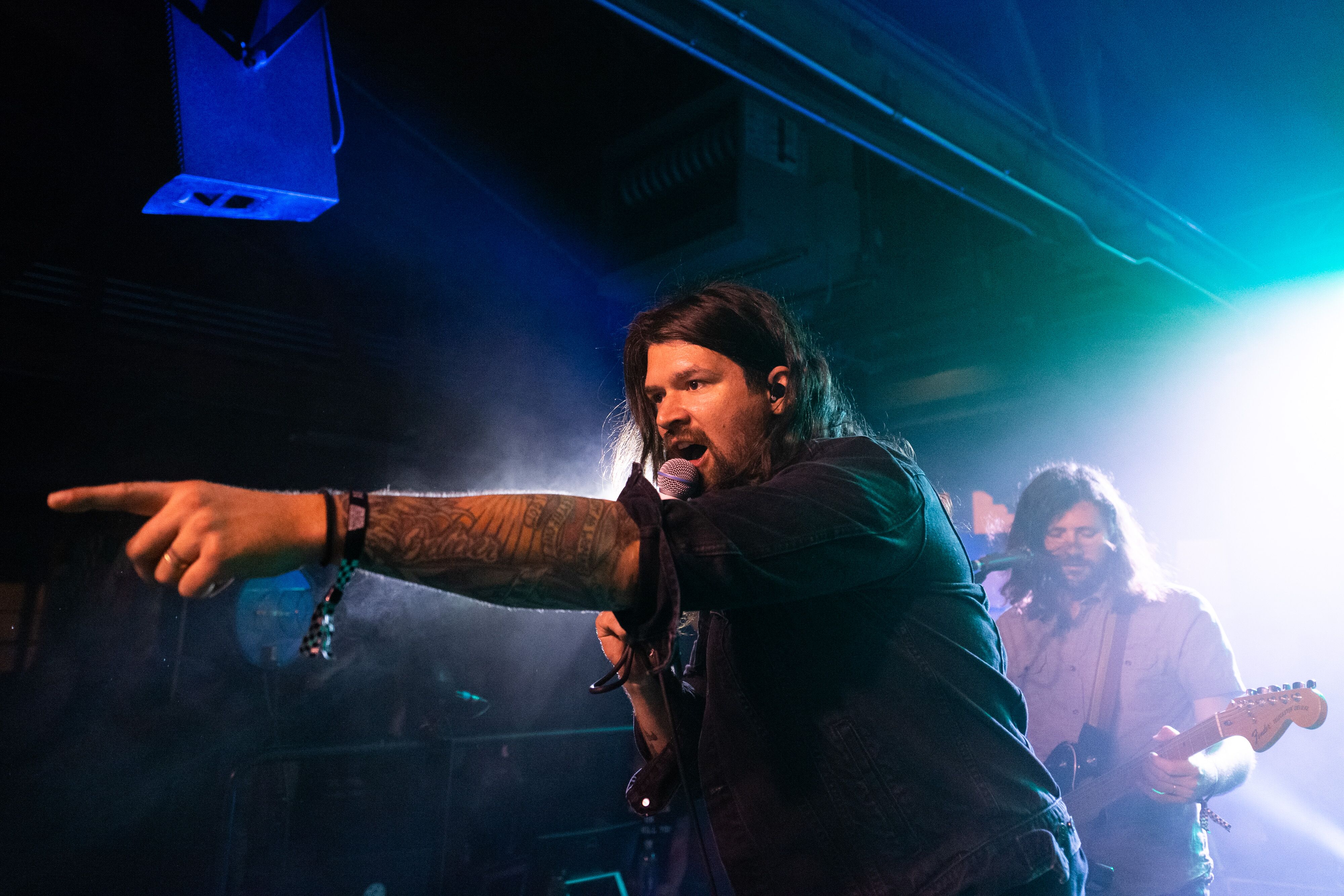 Like my first time seeing Taking Back Sunday at Riot Fest, attending their House of Vans performance wasn’t something I had deliberately planned. However, after a few years of passing by their sets at Riot Fest and Warped Tour and now, after finally seeing them in a small venue, I can confirm that this band knows how to stir up their audience and put on a spectacular show. You can count on finding me in the crowd this fall when Taking Back Sunday returns to Chicago in mid-September to perform their debut album, Tell All Your Friends, in its entirety at Riot Fest in Douglas Park.

If you want to experience a Vans House Party for yourself, you can see what all the fuss is about on July 25 when musical artists Anderson.Paak, The Free Nationals and Kadhja Bonet take the stage.