A Window of Freedom and Acceptance: A Reflection o...

A Window of Freedom and Acceptance: A Reflection on Warped Tour One Year Later 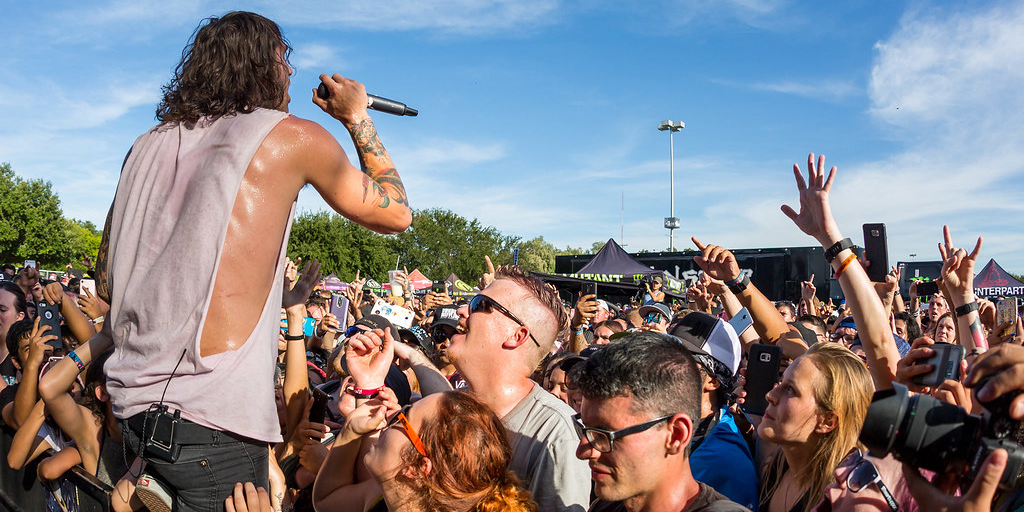 John was in his late 20s, and he finally hit rock bottom.

His attempted voyage to crowd surf along a sea of hands was cut short when he hit the doldrums and fell from a reasonable height onto the hard expanse of asphalt at the Hollywood Casino and Amphitheatre in Tinley Park, Illinois.

While I have no way of ever knowing any more about the guy personally, I watched his tragic fate unfold in amazement during a performance by the music artist Senses Fail at Warped Tour 2018, the last cross-country run of Warped Tour.

After he picked himself up, I wondered what sparked a 6-foot-2-inch man at his age to partake in an innocent display of rebellion usually reserved for teenagers without embarrassment. Like the name of the artist onstage, it appeared at first that his senses failed.

However, it wasn’t that simple. For myself and, as I can safely assume, the guy, Warped Tour was more than just another music festival.

Warped Tour was a cross-country annual summer music festival that lasted from 1995 to 2018. Forgetting about 2008 when Katy Perry was a headliner, Warped Tour’s staple was its lineup of bands, both famous and not, that were associated in some capacity with the emo, punk rock and metal genres.

For fans of those genres, Warped Tour was unique because of that. At a time when artists and bands falling under that umbrella of genres were blacklisted as moral panics, it provided a safe opportunity for them to enjoy and express their support for the artists and music they loved.

“There’s just such a dark stigma around it that they’re dangerous or violent,” said Alyssa Sammons, an attendee of Warped Tour 2018, regarding fans of the emo, punk rock and metal genres. “That they’re depressed all the time, which isn’t true. If you go to Warped Tour, you’d see people just being happy.”

Sammons attended Warped Tour last year. She was first introduced to the tour’s genres in 2015 and was drawn to them for their openness to heavier hitting issues, such as mental health and emotional expression — an openness she found that the mainstream pop genre lacked.

Sammons said this aspect of the emo, punk rock and metal genres was the probable cause of the moral panic and subsequent stigma of violence. However, despite harder, less flowery messages, she said that heavier themes do not equate a negative message.

Regarding emo, she quoted a specific example from the pop punk band AS IT IS called “The Stigma (Boys Don’t Cry)” as a direct contrast to the “bubble gum” of pop. She summarized the song as an attempt by the band to reach their male audience and to spread the message in a world of expected hyper-masculinity that it’s okay to break down and cry, no matter your gender.

“I think to give that kind of message is really positive and nice,” Sammons said. “And, it doesn’t romanticize it. It’s literally just saying, ‘Hey, it’s okay [to cry].’”

Like Sammons, the willingness of the genres showcased at Warped Tour to express emotion was one of the reasons I also attended the tour last year. However, unlike Sammons, my initial exposure and love for those genres began much earlier.

Growing up, I was obsessed with the television series What’s New, Scooby Doo? Running from 2002 to 2006, the series featured a theme song performed by the then chart-topping punk rock band Simple Plan and in-episode music by Simple Plan and other artists with similar sounds.

Due to a strict religious upbringing, it wasn’t until I entered high school in 2013 that I was finally allowed to explore music on my own. However, despite the passage of years, when I set off to explore the vast world of music, I found myself drawn back to my childhood fondness of Simple Plan and other similar artists from that era.

To me, the music found itself deeply rooted in my soul. It was a source of childhood innocence and freedom — an escape that allowed me to be myself without the pressures of my conservative family. It was a supportive and acknowledging voice during my high school years of my daily struggles with depression and suicide.

I wasn’t the only one to feel that way during that point in my life. Emily Firestone, who attended Warped Tour in 2014, 2015 and 2016, was similarly impacted by the genres represented by the tour when she was first introduced to them in 2011.

“At the time, you could connect to a lot of people through the music that were kind of feeling the same as you, going through a lot of the same minor issues that you thought were the end of your life,” Firestone said. “They’re, you know, transitioning into high school. And, the music not only kept you going but also brought you together.”

Firestone noted that this aspect of community went beyond one’s internet chatrooms and close friend circles. For Firestone, Warped Tour was an opportunity to interact with and see the greater reaches of the community in person, reaches that went beyond the fan level.

“The bands were willing to meet people,” Firestone said. “They were willing to go out of their way for them. Whereas, Lollapalooza, people go on, and then they leave. There’s no really connection.”

Sammons recounted a similar takeaway from her Warped Tour experience.

“We walked in, and one of my favorite bands I listened to for a long time was just standing there,” Sammons said. “And, I was just like, holy s—t, that’s Janick [from The Story Untold], and I got to meet him. It’s something I never experienced before. I’d never met somebody who I actually looked up to.”

In a world of cookie-cutter, depersonalized music, Warped Tour was an opportunity to find support in a community of fans and artists and to be acknowledged as a valid person, no matter how dark your life struggles were.

It was a window of freedom that didn’t discriminate if you had gotten into the music early on or just recently, and didn’t care if it was your first time at the tour or if you were a yearly attendee. In its 23 years of existence, Warped Tour didn’t waver from those values and stood to welcome those such as John, Sammons, Firestone and myself. It fought the moral panic to shed positive light on the community of fans and artists who made Warped Tour what it was: a space to explore and find the reality of oneself in a sugar-coated world.