A Window of Freedom and Accept.. 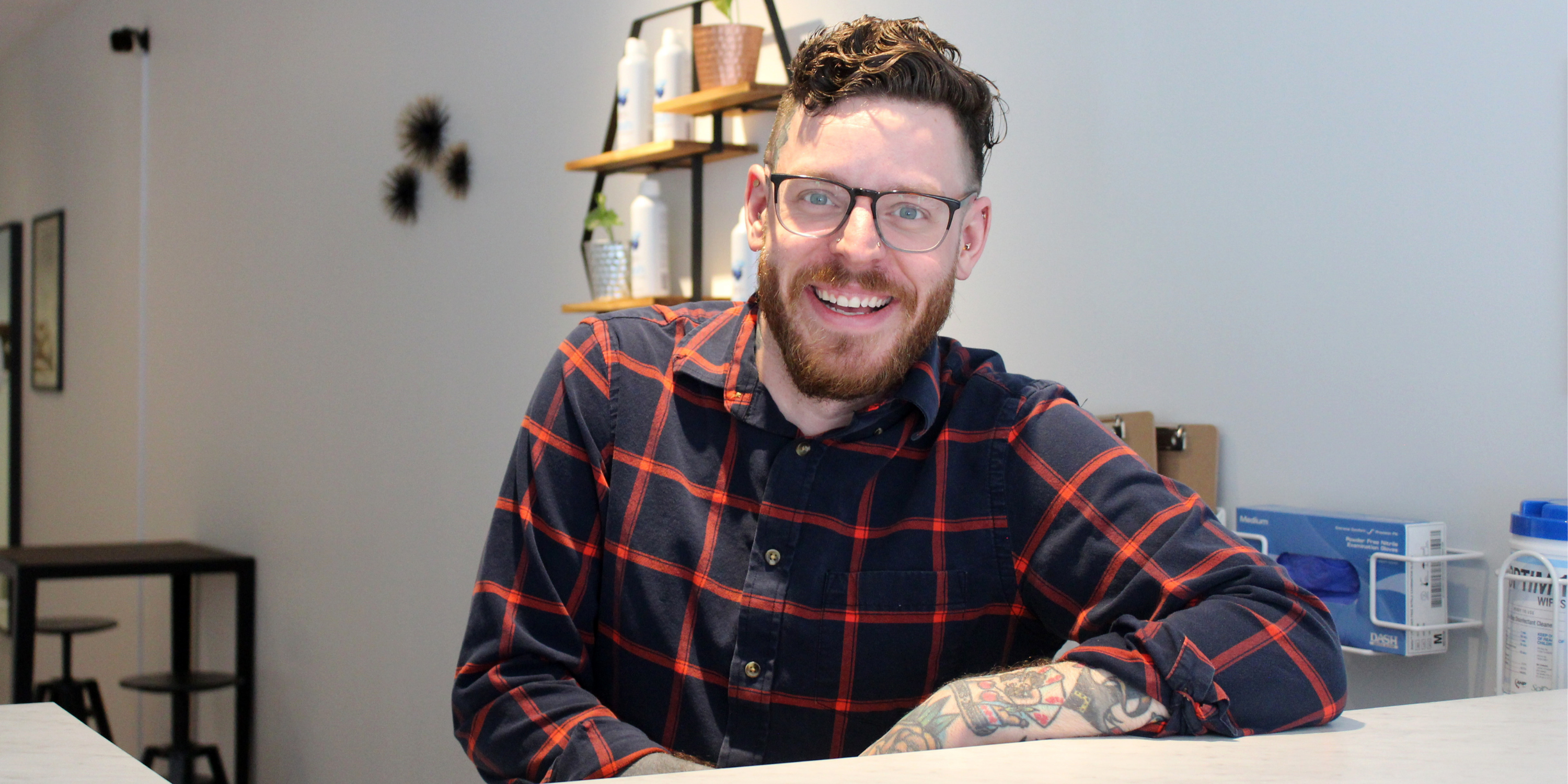 Eighteen-year-old Jeff Clark was too afraid of getting a tattoo, so he settled on a piercing instead.

While his friend lay down on a chair to get his own tattoo done, Clark was handed some paperwork to fill out and told to go sit in a room. There, he waited alone until a man walked into the room completely silent, shoved a needle through Clark’s nose, put the jewelry in and left.

Today, at 32 years old, Clark’s nose piercing is miraculously healed and sporting a rutilated quartz set in rose gold. He has countless tattoos — many of them peeking out beneath the sleeves of his flannel shirt and the closely cropped hair on the sides of his head. These days, he finds himself on the other side of the piercing chair.

At Luxe Piercing in Forest Park, clients get more than just the “hello” that they’re looking for. They get a whole personalized experience, from designing their piercing to learning how to take care of the fresh addition to their look.

Luxe is Clark’s brand new business that opened earlier this year in April. Piercing, though, is an old love — one that’s taken years of shaky friendships and refining technique to nail down.

In his twenties, Clark found himself between jobs as he helped his friend open a new tattoo studio. It was there that he was offered an apprenticeship for something he never thought of as a legitimate career. “I decided, yeah, I’ll give it a shot and see if I like it,” said Clark. “And then I kind of just fell in love with it.”

The first person Clark ever professionally pierced was his mom. Just as he was about done piercing her nose, he took the needle out and slid the jewelry in, holding his breath. Not for too long, though, because blood began to pool from her nose and down her shirt. “The guy that taught me, he always told me to go up a size in the needle,” said Clark. “I felt so bad. But she still has [the nose piercing] to this day.”

Clark soon came to know that the one-size-fits-all mentality of piercing was just a ruse, whether it be the actual act of piercing or the overall experience. He itched to learn more, to do more, but felt restricted in the place that he was in.

Luckily, he wasn’t the only one unhappy in that shop. Tattoo artist Eris Qesari eventually approached Clark with the idea of opening a new shop together, with Clark able to run piercing however he pleased. Once again, Clark decided to take the step toward uncertainty to see what would happen, much against the will of the other members at the shop.

“They were mad and they didn’t think we were going to do good,” said Clark.

“Good” would be an understatement for how well Qesari and Clark were doing at the new shop in Oak Park, Venture Tattoo. In fact, the studio’s business grew so rapidly since its opening in 2014 that the steady flow of people is what would end up pushing Clark out of Venture and into opening Luxe. This time around, though, the move was full of support.

Luxe is all piercing with no distractions. The studio is pristine, exuding the modern rustic vibe that trendy home designers often pine for. Succulents line the walls in geometric planters and the sleek glass display cases shine almost as bright as the jewelry within them — thanks to Clark spraying down the glass any time he has a moment to spare.

Each shop that Clark had pierced at was born from a moment of circumstance and chance.

But this? This one is deliberate. Clark has finally grown into his profession and into himself. Luxe was not opened by chance — it was opened for a purpose: to de-stigmatize the piercing experience and make it easy for people to walk in and comfortably figure out what they want to put in their skin.

Part of that comfort comes from simply being there to greet people at the door, offering them some coffee and letting them flip through jewelry books or walk around the cases to see what catches their eye. All the while, Clark makes some banter and lets those people get to know him. 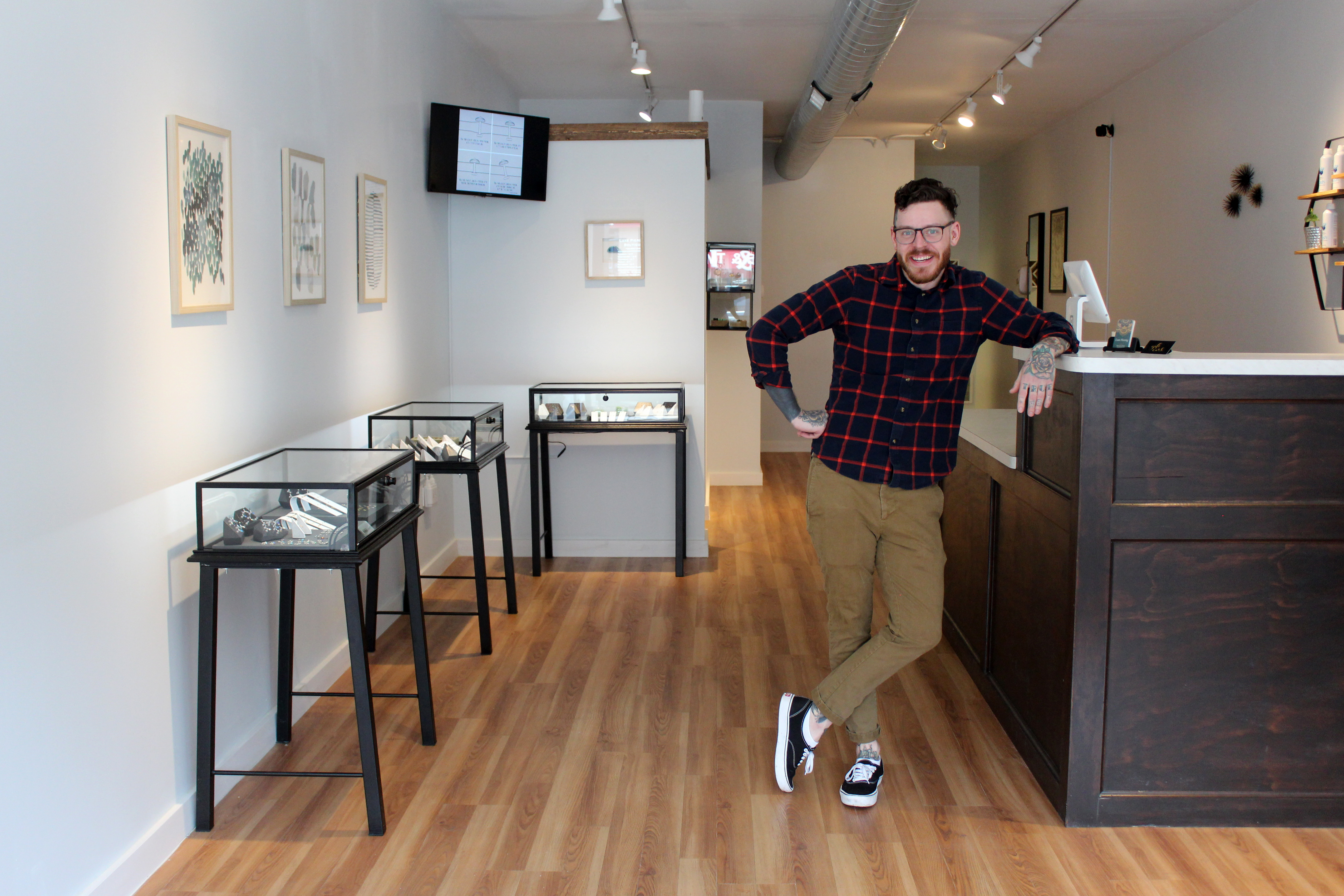 Essentially, Clark is trying to create the opposite of what his first experience with piercing was like. “It’s an intimate thing,” said Clark. “You are taking a needle and shoving it through somebody’s body, so there needs to be some sort of conversation to try to calm them down.”

In a time where people care about what they are putting in their bodies, it’s important to consider what they’re putting through them, too. Luxe is aptly named for the range of high-quality materials that it exclusively offers, among them implant grade titanium and 18k solid gold.

But before piercing boutiques like Luxe became mainstream, Claire’s Boutique was the place for ear piercings in most people’s minds because of its convenient location in shopping malls. According to their own estimates, Claire’s has pierced over 100 million ears since 1978. Millions of ears pierced with a device that professionals shudder at the mere thought of — the piercing gun.

The facts are these: piercing guns cannot actually be sterilized and they will never be as precise as a needle.

Professional piercers sterilize their needles, jewelry, and other tools in something called an autoclave. The objects inside are exposed to high-pressure steam to properly disinfect any microbes that might be present. Piercing guns, though, are made of plastic and would melt in those conditions. Instead, Claire’s opts for wet wipes.

On another note, piercing guns don’t have needles that do the actual piercing. The gun simply takes the post of an earring — while sharp, not needle-sharp — and forcefully shoves it through the earlobe to create a hole. It’s quite the mess, and it’s often performed by teenagers working part-time jobs in the mall that have no training in the prevention of infections.

“A majority of people have been pierced in not the best environment using poor quality jewelry, then they have it in their head that they just can’t heal this sort of thing,” said Clark. “A majority of the time, it’s just a small change to get it to heal. It could be the jewelry quality—you might just need something that’s meant to go in a body.”

Luxe is not just for the punks and metalheads of Chicago’s underground culture. Piercings are for everyone, and the care that comes before, during and after should be, too. Clark believes that piercing studios like Luxe can help bridge that gap of care.

“Yes, it seems scary. Yes, it’s not the same kind of environment that you’re used to,” said Clark. “But this is the best way to do it, and I feel like a lot of people are starting to learn that.”