I Never Came Out— I Just Started Listening to The ...

I Never Came Out— I Just Started Listening to The Runaways 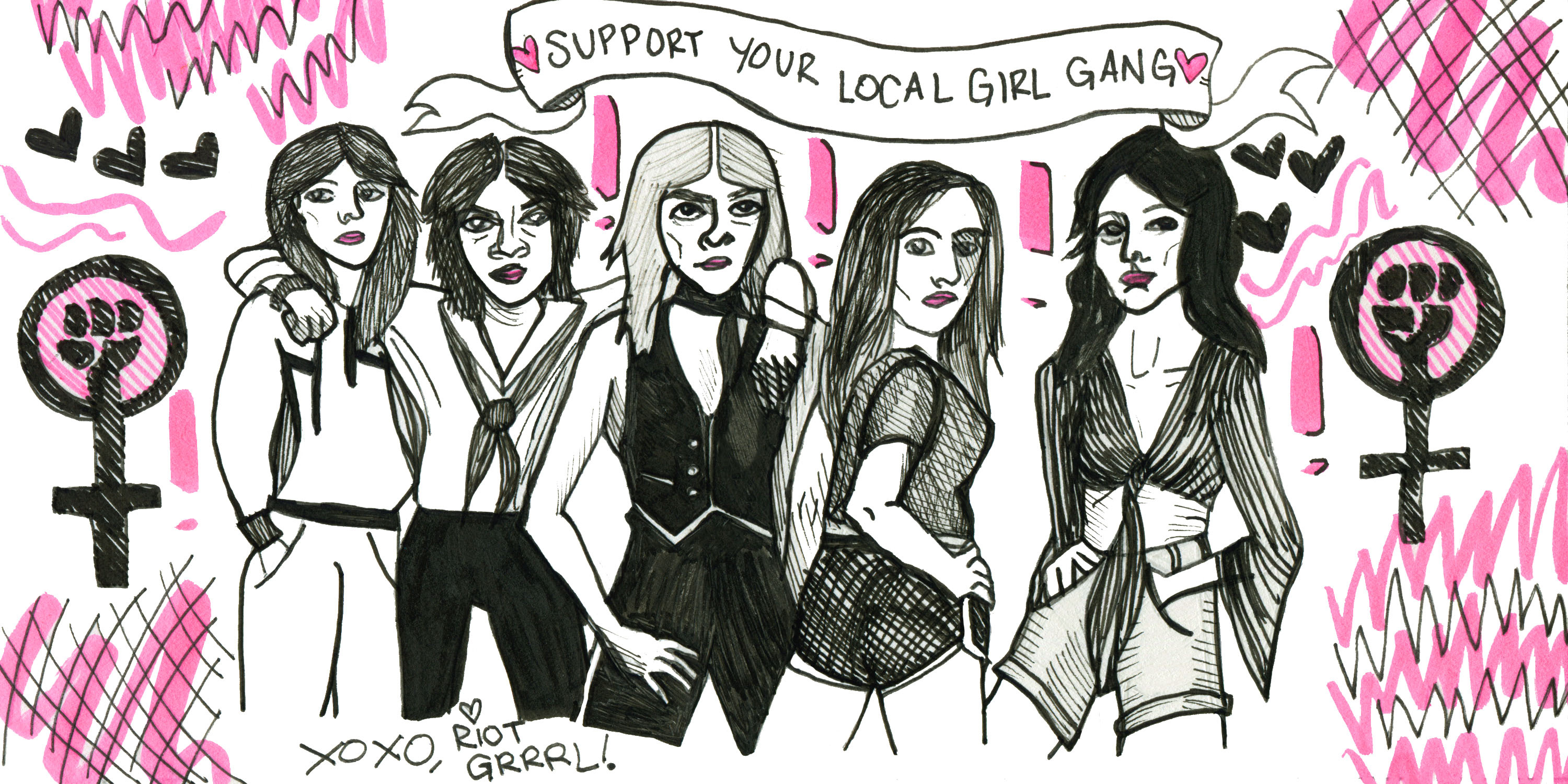 For many people in the LGBTQ community, “coming out” about their sexuality or gender to their family and friends can be an important milestone that, in an ideal situation, can lead to greater transparency, acceptance and understanding between them and their loved ones. However, not everyone in the LBGTQ community “officially” comes out, or is in an environment in which it is safe or acceptable to do so.

Feelings of unacceptance and the fear of violence and negative retaliation are just a few of the reasons that prevent someone from coming out. In fact, a survey of LBGTQ people by Dr. Evan Goldstein of Bespoke Surgical found that fear of familial tension, isolation and estrangement is the main reason that many queer youth choose not to come out.

Goldstein’s study found that the average age a person realizes they are gay, queer or transgender is around 17.5 years old, yet the average age for coming out within this same group of people surveyed was nearly 21. While I personally fit the statistic of realizing I was queer around the end of high school—that is, I finally was able to put words to the feelings I had felt since late-elementary school—I never “officially” came out publicly to my friends, and I have yet to come out to my parents and extended family members.

Man, are they going to get a kick out of this.

Growing up in a Christian Lutheran household that reinforced the idea that being anything other than cisgendered and heterosexual was a sin, I struggled to identify the feelings I had for women from a young age. While understanding sexual and romantic attraction can be difficult for any young person, I began to feel those forms of attraction towards women before I had a crush on any boy. I tried my best to repress those feelings because, even though I wasn’t sure exactly what they were or what they meant, I knew that my parents would find them “wrong.” And so I did my best to ignore my attraction to women until a few years later when I stumbled upon the 2010 biopic of legendary all-girl rock band, The Runaways.

The Runaways is a movie that normalizes the behaviors and attitudes of rebellious young women who are coming to terms with their sexuality. When Kristen Stewart makes her first appearance as rock ‘n’ roll goddess Joan Jett, her demeanor is tough, tomboyish and all-leather. As she nervously peruses a selection of leather jackets, the woman at the front desk calls out to her, “honey, you’re in the boys’ section, the girls’ jackets are on the other side.” When Jett saunters up to the counter, she dumps out a bag of coins and a few crumpled bills as she boldly eyes a man in a studded punk rock jacket who has been speaking to the sales associate.

“I want what he’s wearing.”

After acquiring her new jacket, Jett runs down the street as Suzi Quatro’s cover of “The Wild One” plays. When she meets up with her friend, the two sit in an empty lot as Jett strums an out-of-tune electric guitar and her friend explains that her brother told her that men don’t like tough, plain girls like them; they prefer soft, quiet and pretty girls. Suddenly, she leans forward and kisses Jett before pulling away to exclaim, “I’m the wild one!”

After the abrupt kiss, Jett eyes her friend and gives her a sultry smile, but there is no judgement in her eyes. The casual nature of their exchange, which the viewer can safely assume is the first lesbian experience for both young women, initially made me squirm—but in a good way. The more I re-watched this movie, I realized that playing off a kiss between friends as no big deal made me feel that maybe there could be an alternative to kissing boys; maybe I didn’t have to kiss boys—whenever I finally kissed anyone for the first time, that was.

As a 14-year-old self-declared tomboy, I was instantly drawn to the character of Joan Jett. As the movie progresses, the dark charcoal liner under her eyes grows heavier and her tight leather outfits only become more form-fitting; I wasn’t sure if I wanted to be Joan Jett or if I wanted her to be my girlfriend. In contrast to the young women dressed in tight shimmery clothes and colorful makeup who hang out at Rodney Bingenheimer’s English Disco, the rock club that Jett frequents, Jett’s look is dark and masculine as she lurks around the club, looking for both female members to join her band and, one can assume, for a companion.

While all these scenes helped me build confidence in my emerging sexuality, none of them can compare to the soft sex scene that eventually unfolds after building tension between Jett and vocalist Cherie Currie, who is portrayed on screen by Dakota Fanning.

After performing at a roller rink where Jett has been watching Currie skate, the two rest against a brick wall outside the venue. Currie lies on her back, sliding her roller skates up and down the wall as Joan sits beside her. Four or five young men surround the pair and make futile attempts to talk to them, to kiss them, to do anything for the rockstars’ attention, but the two teenage women are uninterested in the affection of these boys; the only thing they’re interested in is each other.

As The Stooges’ “I Wanna Be Your Dog” plays, the scene becomes flooded with smoke and red light that surrounds Jett and Currie while simultaneously blocking all of the young men out of the frame. Jett climbs on top of Currie, their faces millimeters apart, and exhales her cigarette smoke into Currie’s mouth before the two run—or skate, in Currie’s case—away to their hotel room. What follows next is not an explicit sex scene, but a series of psychedelic shots that shows the two women undressing each other as well as goofing around and jumping on the bed in their underwear without actually showing any nudity. There is not a single on-screen kiss in this scene but, to my young adult self, there didn’t need to be; my thoughts on two women being together in a sexual capacity had been cemented.

After watching “The Runaways,” something inside me clicked. I slowly began to allow myself to feel attraction to women and, as I did so, the soundtrack of “The Runaways” entered my daily listening rotation. I dove into the only two studio albums that The Runaways released before the band cut ties with Mercury Records and their manager Kim Fowley in 1977 and guitarists Jett and Lita Ford left to pursue solo projects, and I began listening to more of Joan Jett’s discography than just her classic rock radio hits. I discovered artists on the movie’s soundtrack, like Suzi Quatro, who lead me on a journey to discover the ways that women ruled the early days of rock ‘n’ roll. “The Runaways” was more than just my sexual awakening; it introduced me to the importance of female representation in music from an early age.

It would be another four years before I found the confidence and language to identify myself as queer, as able to be sexually and romantically attracted to all kinds of people; not just cisgendered men.

Even after I came out to my close friends and my partner at the time, I never felt able to come out to my family for fear of their retaliation. I considered myself lucky to be dating a cisgendered man because I felt that meant I had no obligation to come out publicly. My parents could assume I was straight for all I cared; what was the difference?

But there was a difference; it did matter. As I grew older, I realized that who I was dating in no way defined my sexuality. In fact, by not coming out to my family while being in a hetero-presenting relationship, I actually felt like I was hiding who I was, even though I was not ashamed of myself and my sexuality.

Coming out in a traditional sense didn’t feel quite right for me, and I am still a bit embarrassed to admit that I feared retaliation from my religious family members. I decided that, in my true fashion, I would be able to publish a highly personal essay before I would be able to verbally come out to my parents.

For the past three years of my life, I have been unable to write this essay, but I am comfortable with the time it took me to reach this point. Coming out doesn’t have to look the same for everyone; for me, coming out was listening to The Runaways on repeat until I found the perfect time and outlet for me.