How to Report Sexual Harassmen.. 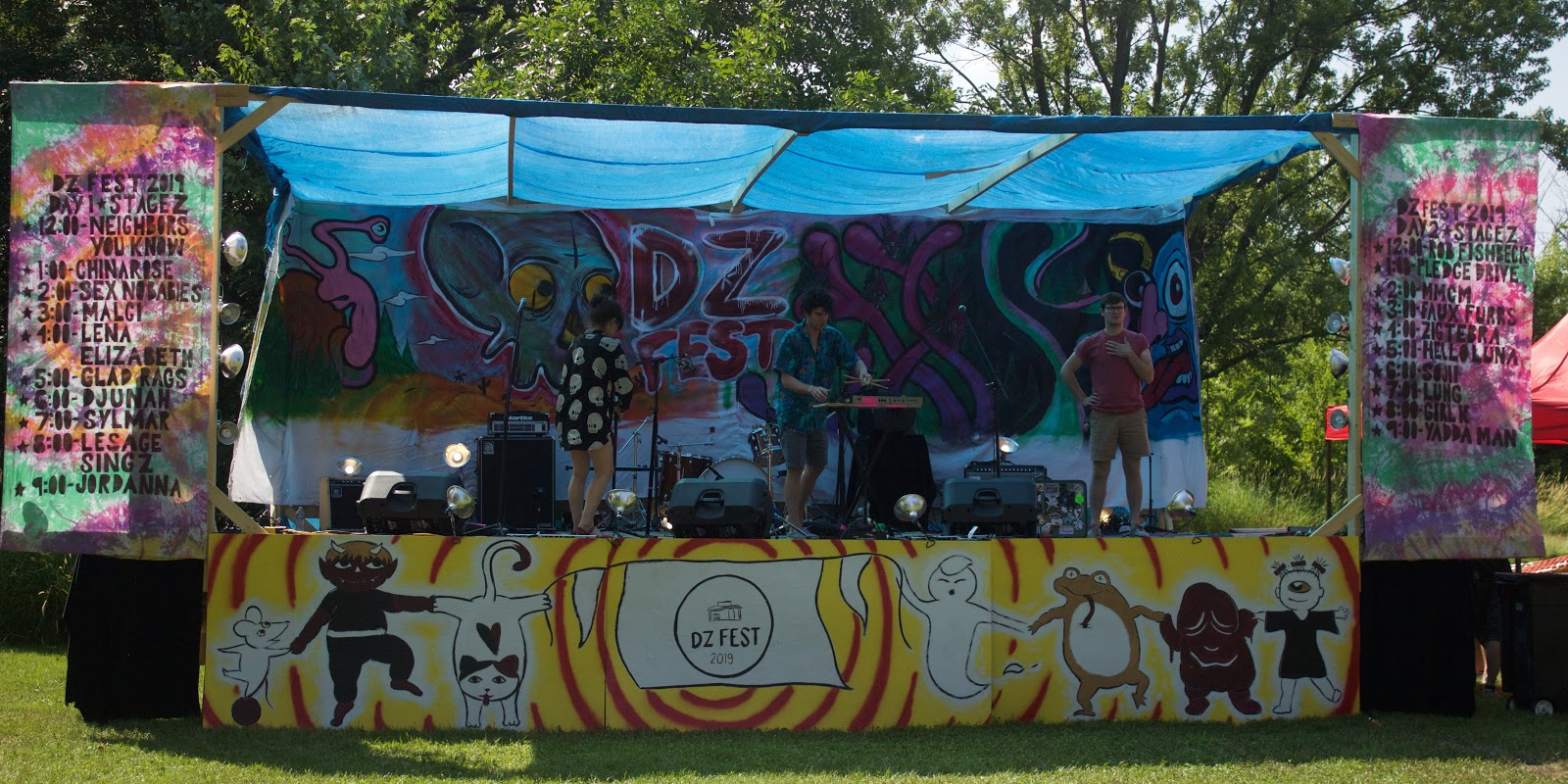 Summertime is festival season. Whether it be Pitchfork, Wicker Park Fest or Lollapazoola, everyone is attending something and is given the opportunity to see one of their favorite artists live in concert.

While the city is bustling with fests nearly every weekend, in the small town of Hickory Hills, southwest of Chicago, DZ Fest was held on July 12 and 13.

In its eighth year running, founder Benjamin Arguelles never thought his idea would make it this far.

So what is DZ Fest? It is not an easy answer.

Imagine a group of hippie teens, trapped in a parent’s house, but with one wild, unchainable dream. A dream to bring a big-time festival into their own backyard. Arguelles and his team have been doing just that for eight years and counting. “I never thought it would come to this, but I never thought we’d do it to begin with it,” said Arguelles, now an instructional assistant professor in sound at Illinois State University. This energy — of dreaming outside the box and of wanting more than what is just in front of you — is what attracted me to the DZ.

I am biased, of course. Because It was a getaway for me too at the end of my high school career. It was where I met my first love. It is where I found my dreams could come true — and this I believe, is what everyone who visits finds. 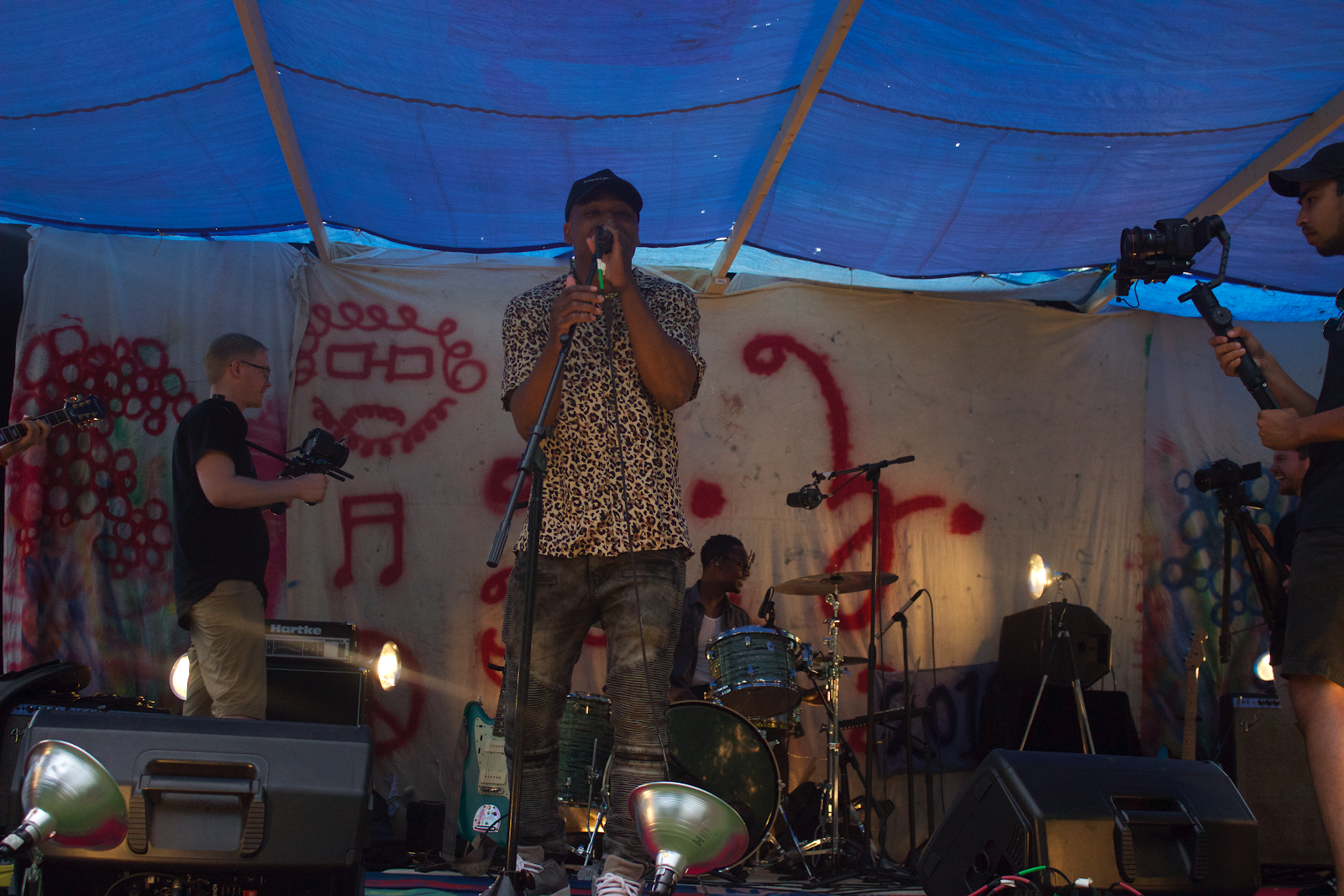 The dream did not start with the festival, however. It was a dream of staying in the life they wanted to live forever — the teenage fever — while gaining the adult freedom every kid wants. Arguelles always had a talent for music and his friends did, too. So he thought, why not do everything by themselves?

“There is a good 10 people that really give it all. They’re my oldest friends, even family. I got my mom working the door now,” Arguelles said. “The first six years she was not too thrilled with my decisions doing this. Once she started to see how everyone loves it, she’s more into it now.”

Friends help build the stages, paint the signs and the backdrops, screen print the volunteer shirts, dig the sound wires underground, record video of the performances, and everything else in between. The first acts to play in the first few festivals were Arguelles’s friends. As his recording studio built up a reputation for its live videos and intimate shows, bands from the city and across the country started reaching out to him to play. 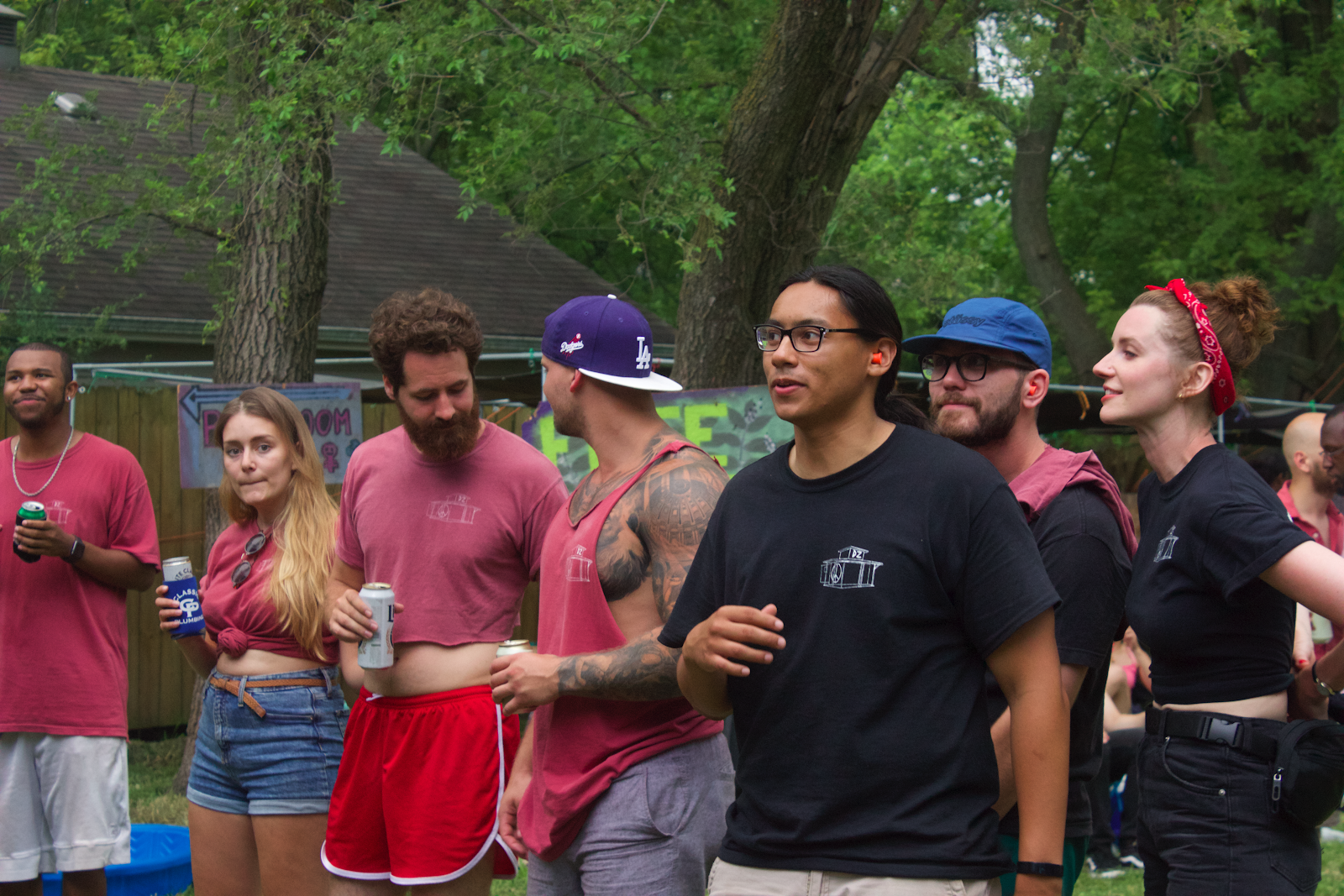 But his parents not being too thrilled is an understatement. Arguelles said he had always been disobeying his parents, for the sake of his creative dreams becoming reality.  Once DZ Records became his full time job, graduating from SAIC with a masters degree in fine arts in studio art and sound, they began to sympathize, as any worried parent would, but they eventually approved of his way of living.

The first DZ fest started on a summer Saturday in 2012. It was theatrical, cinematic, dysfunctional and almost too hard to believe.

“It was more like a backyard BBQ,” Ben’s cousin, Matt Baur, said. “Trip on this: Benjamin’s parents left on a Friday, it was set up that Friday, executed Saturday, broken down Sunday, for them to come home. This is now his space for him to do whatever he wants.”

As Baur and I stand behind Henry’s Taco Truck that was parked next to Arguelles’s house that has food for attendees to munch on, we look out across the yard to the two stages at the front and back. It was hard to imagine it was ever anything less.

“The first DZ Fest maybe had seven and a half musical acts. Also there are more volunteers today than total people at the first one.” The origin of the term DZ is supposed to be kept a secret; however, most people call it the Dream Zone.

Before stepping into the backyard, there is a hand painted rainbow sign that reads “DZ Fest 2019” in big bubble letters. There is a small tent adjacent to the house’s side door, where donations are accepted. Arguelles never really makes a profit off the fest due to the cost of all the equipment, but this year all the proceeds went to Chicago Public School’s Children First Fund, for underfunded music and art programs. 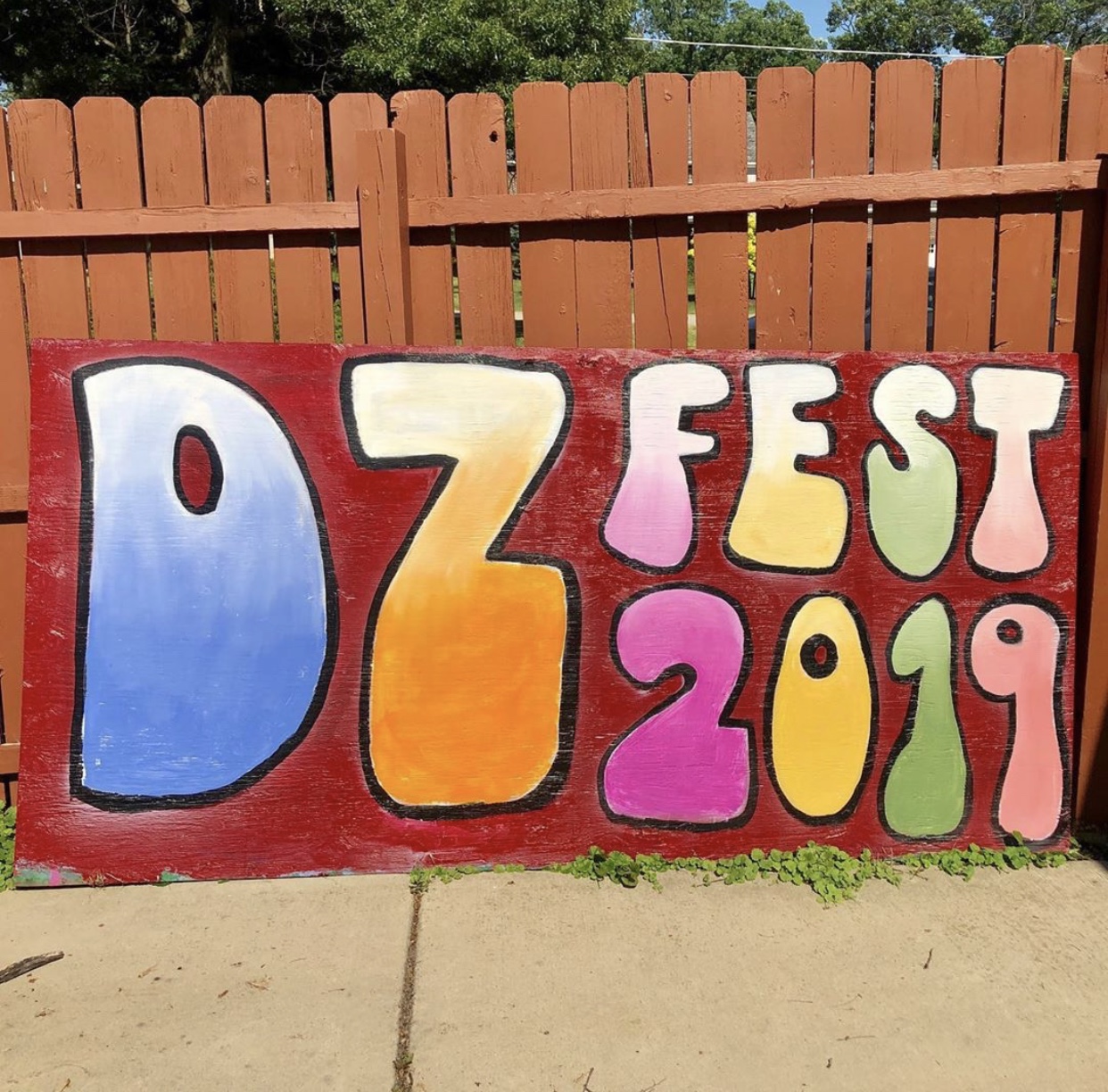 With a full acre of land, there is plenty of space for two stages. In the middle of the yard there is a sound tent enclosed by yellow rope. It looks legit.

“It’s a healthy sprinkle of DIY and professionalism that is so unique to the area and to music in general. It hits all the senses — it hits you from every angle,” Baur said.

“You can lump it into indie hipster stuff but there are hip hop acts, there are harder rock acts,” he continued. The eclecticism is unreal.”

When I first told my friends and family about DZ Fest they were understandably skeptical. We all grew up with that one friend who had a garage band. DZ does not just draw in the local DIY community but also hidden gems from all over the states. Texan Matthew McNeal happened to be passing through Chicago in 2015 for a session with Daytrotter, a recording studio in Iowa known for their unique recording sessions, when his management at the time had found DZ Records. 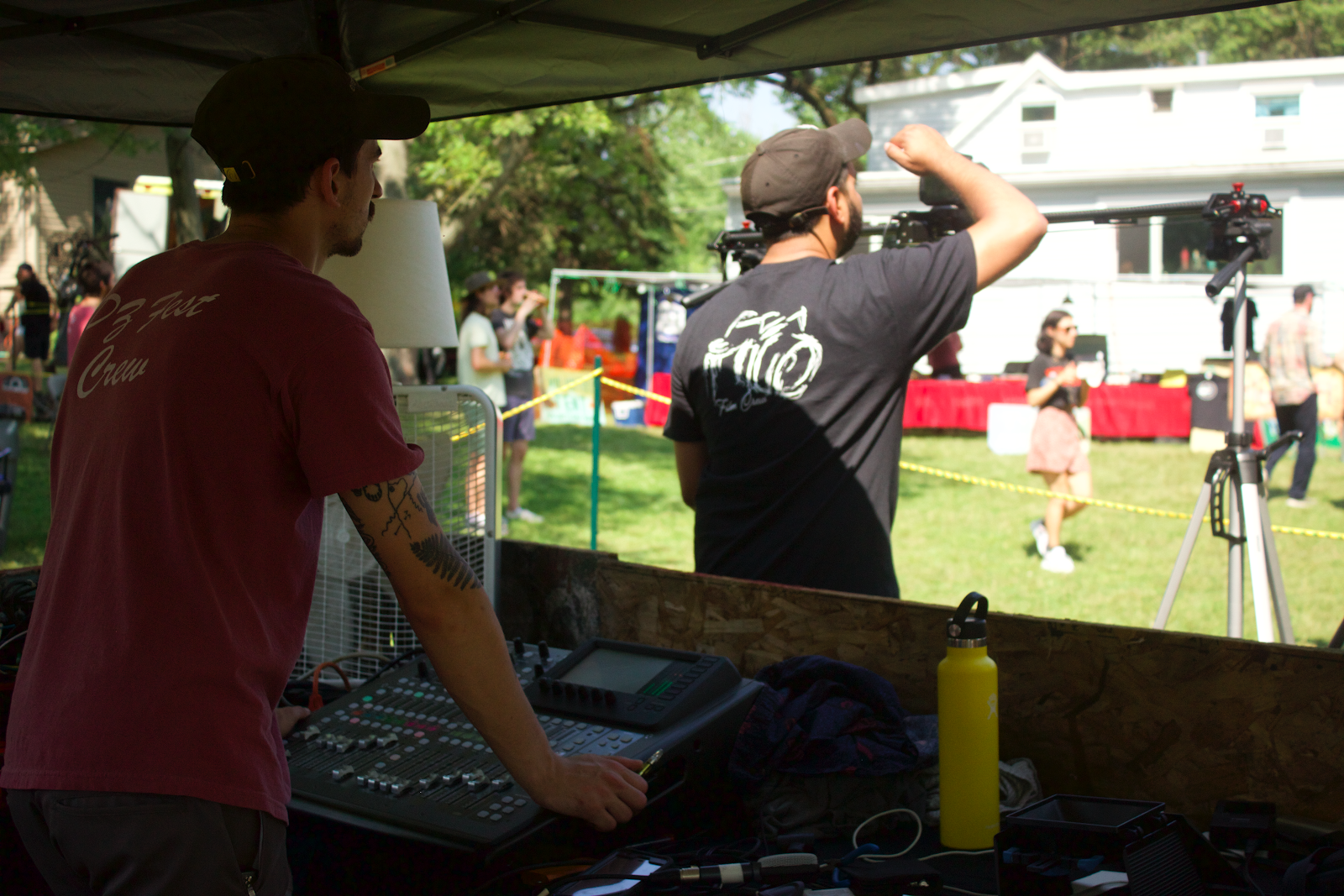 “We’ve been friends since. The stars were aligned on that one and now we’ve been here like, twenty times,” McNeal said. As much as McNeal loves the DZ, they love him back.

“What Ben does, his vision and the care he puts into everything he does really resonates with me. This whole family of DZ that surrounds this place, this house — it keeps you coming back,” McNeal said. “It’s some of our favorite people. It’s our friends, our family now.”

The audience crowded close to the stage and sang along to one of McNeal’s hits, “Romarosa.” This year was his fourth year playing DZ Fest, and his first headlining. McNeal recently teamed up with clothing brand Dickies to create a short film about his band’s new record label, Matte Black Sound.

Singer RJ Collins, who appeared on The Voice in 2017, performed later in the afternoon on Sunday. “I think DZ fest is life-changing because it’s just a place where people who were rejected could be connected and have something in common. It bridges the gap of color and gender.”

Music is not the only artistic medium that people can find at DZ fest. Tents filled with painters, drawers, a tarot card reader and even a welder’s work sit snug along the fence. Tim Strzechowski, a teacher at Arguelles’s old high school, had his own booth. I caught him live painting the DZ, a shabby yet charismatic cabin that Arguelles and his friends built back when he was 15. It was boarded off for the fest. Inside a wall comprised of Arizona Tea cans can be found. Before DZ fest or DZ Records, his recording studio was the DZ — the cabin where he and his friends would escape the world. 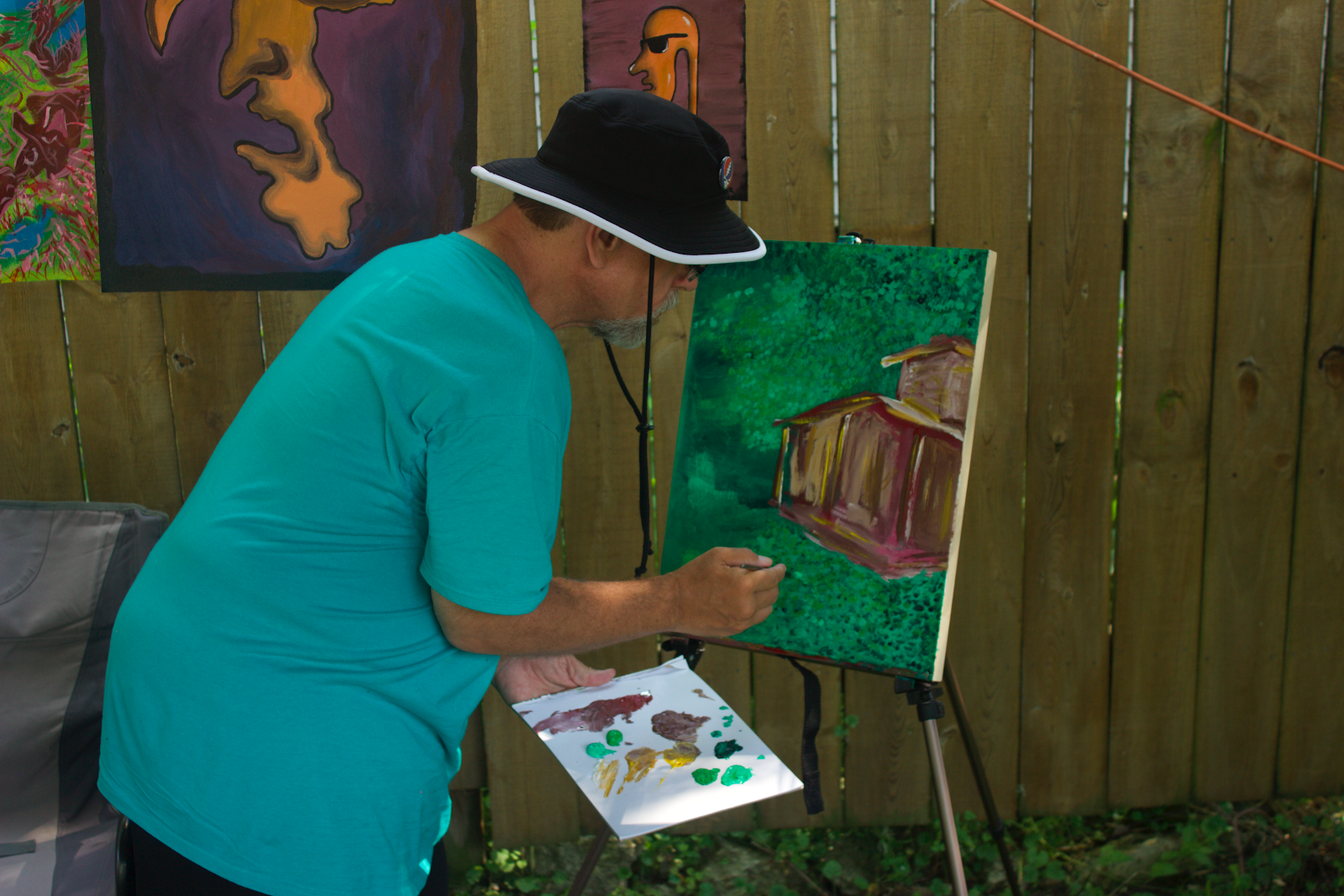 Arguelles was never Strzechowski’s student, but he remembers seeing Ben everyday in the hallway during passing periods. Strehowksi reflected back on him as a friendly character, with a big afro and often wearing a red and white Polo similar to one from Where’s Waldo.

“I do not think people realize the caliber of bands he is getting. People are exposed to pretty cool indie, a nice eclectic mix, that is primarily local but also from around the continent,” Strehowksi said while a band from North Carolinian jammed out on Stage D. In previous years bands all the way from the U.K. have performed. 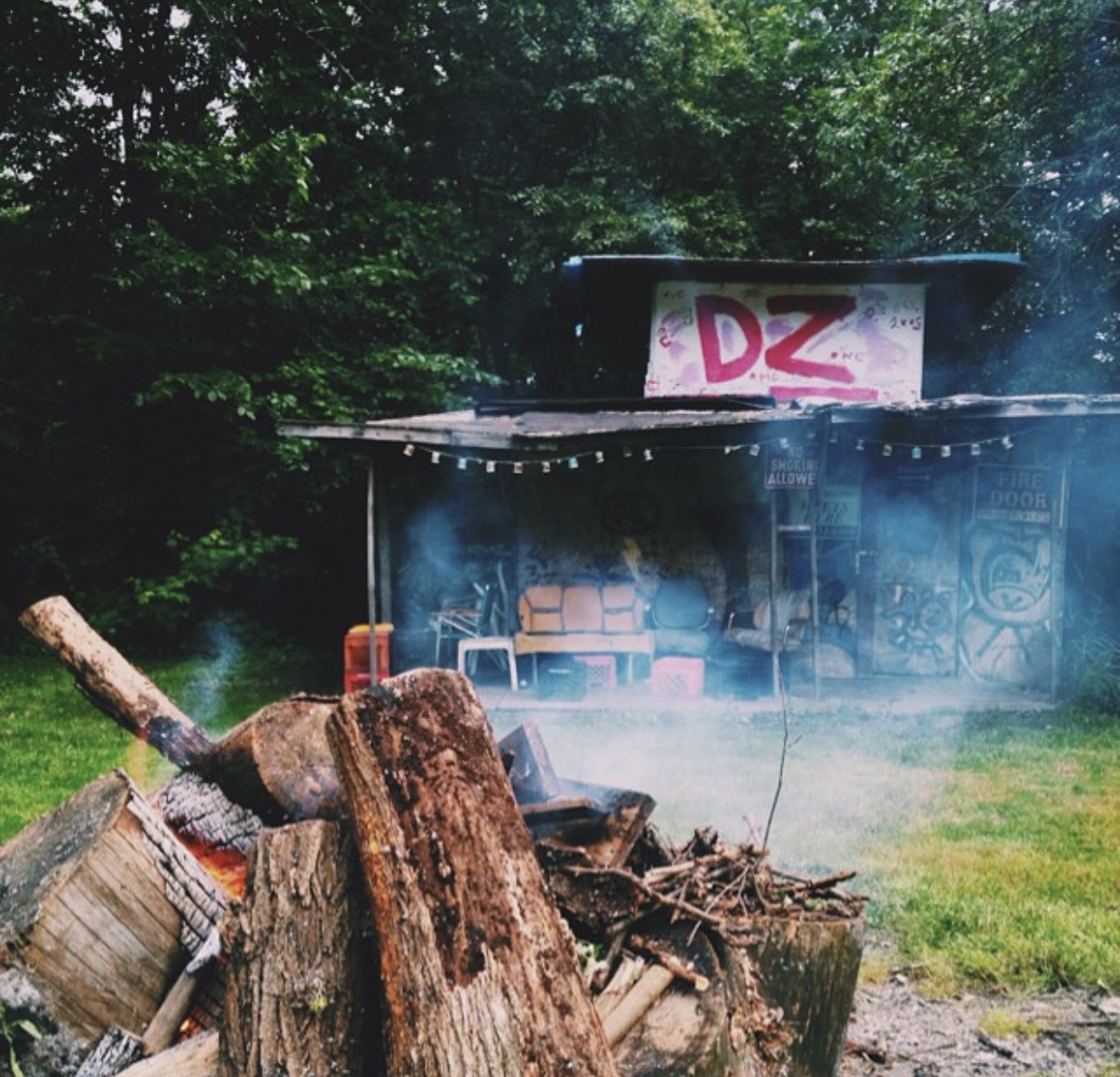 I take Arguelles away from the sound tent for a moment to talk with him. The sun beams down on our heads and we walk through his freshly cut grass, behind Stage Z. We sit down near the trees that extend out into the forest, like two little kids who ran away during recess. Behind us the band is finishing up the last tune of their set. Much like any large-scale festival, there is a backstage with free beer and a place to store equipment. Two volunteers watch the stage, bobbing their heads to the music but still keeping a keen eye to make sure all equipment is kept safe.

What does DZ mean to the founder himself?

“[It’s] a place to feel comfortable, creative and alive. I think it is a place to find other like-minded people regardless of your origin — race, gender, ethnicity, age,” Arguelles said.

This is why people come, stay and return. People feel at home, make it a home and come home. After not visiting the DZ for over a year, I immediately felt at home when I returned.

When Baur mentioned the DZ hitting all seven senses, I think of sticky, warm summer air. The kind that smells like wet grass, cigarettes and a burning fire. It’s like the feeling one gets when the credits roll at the end of a bittersweet movie, with a familiar yet unknown song fading away. It’s the taste of a first sip of a cold beer when you’re so, so thirsty. A charm that one always wished to be real but could never really find — how everything is new to a child. It is found here.

After eight years of growth and transformation, how will DZ Fest change and where will DZ Fest go? Arugelles wants to keep it in his backyard.

“Literally every single thing on this plot of land was handcrafted, custom built to fit — the stairs, the stages, the fences, the tents are all built and put together. I think people really appreciate it and admire it,” he said

“It went from a really dangerous, not well-built stage with logs as steps, with like seven bands, to this. I don’t know how many people come, but throughout the weekend it is easily over a thousand,” Arguelles said. “It is professionally done but really DIY — it’s kind of on this gray area. It kind of stays under the radar because it’s not official and it’s not unofficial.” 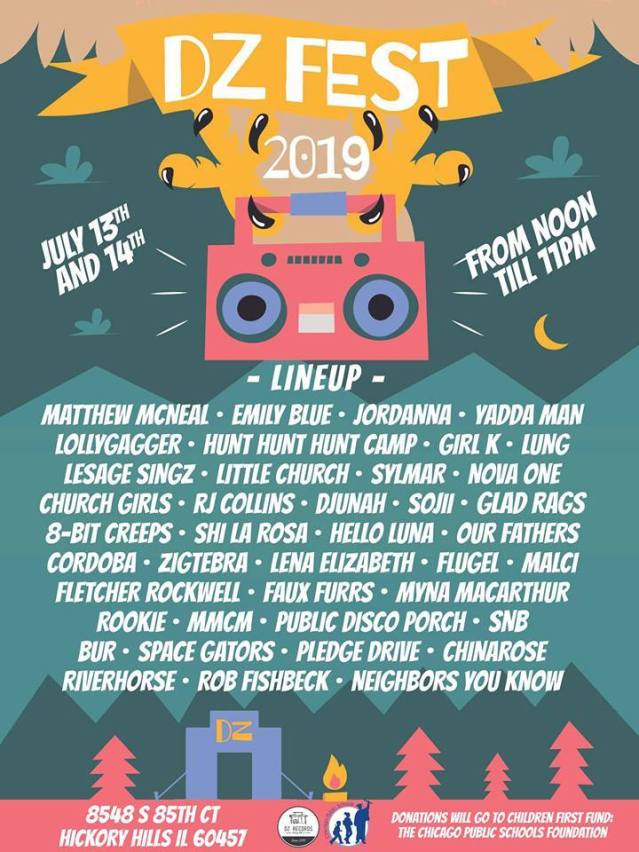