The Trials of Living off Campu..

Chicago News Sources We Follow and Why You Should ...

Chicago News Sources We Follow and Why You Should Too 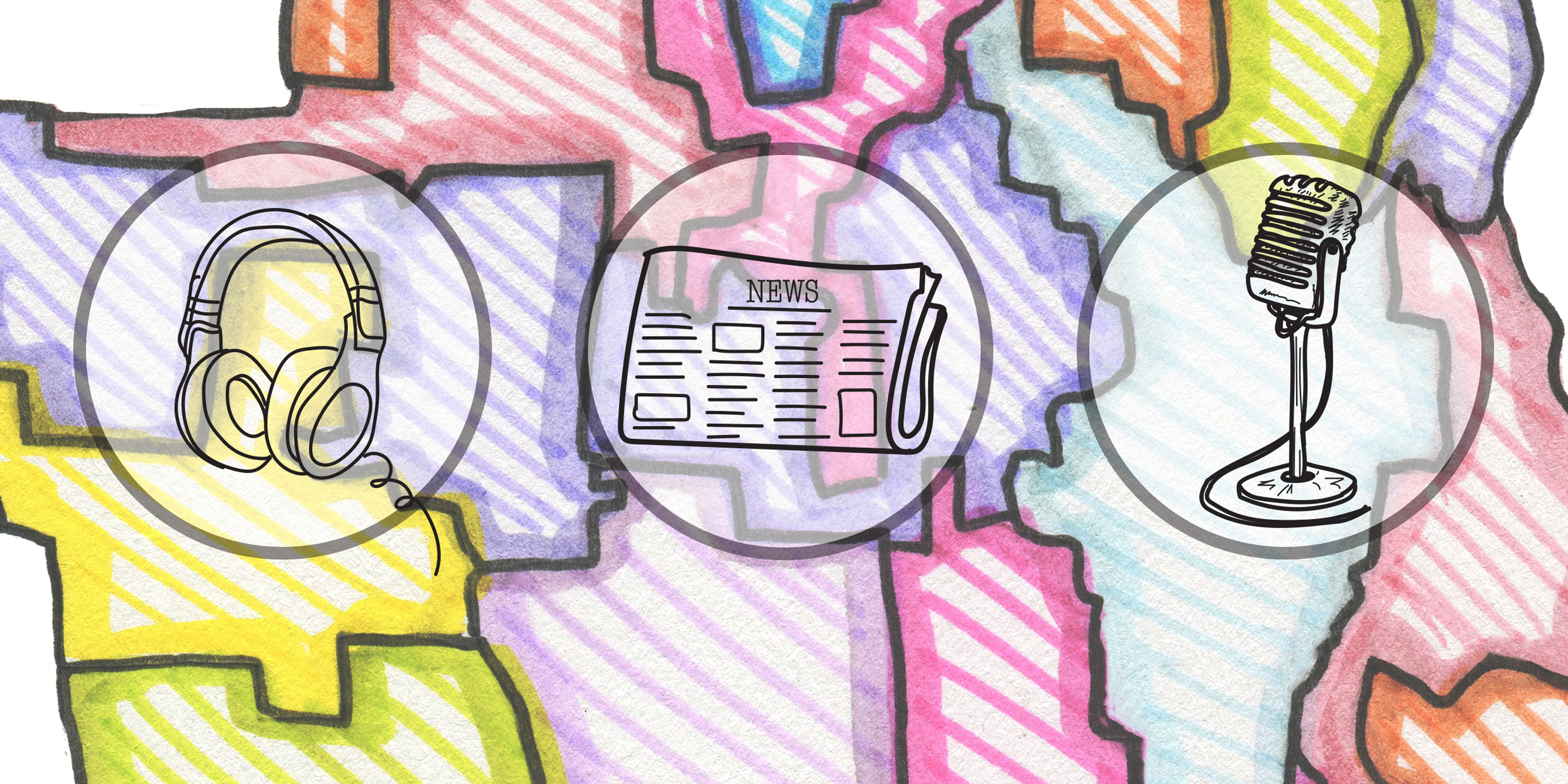 Many students at DePaul are transplants to the city — in fact, only about 18 percent of students enrolled in fall 2018 were from the city of Chicago. The rest came from the suburbs, other cities in Illinois or out of state (last year, aside from Illinois, California had the highest number of freshmen enrolled at 118 students).

This means that many students at DePaul are not just new to the university, but new to Chicago and, sometimes, to the state of Illinois at large. So while figuring out how to lug a futon up four flights of stairs (thanks, Chicago architecture), and becoming acquainted with a new roommate, many students are also learning to navigate a new community. And with 50 wards, a history of systemic issues and many, many different neighborhoods, Chicago is not a simple city to learn about.

Much of our staff at 14 East are transplants themselves — coming from Wisconsin, Ohio, South Carolina and the Chicago suburbs. We got up to speed on Chicago politics, culture and city life  the same way many others do — through watching, reading and listening to the many news organizations in the city.

So if you’re new to Chicago and looking to learn more about your new home, here’s a list of news organizations, reporters and newsletters we follow to keep up with what is happening in the city. (We also made a list on Twitter you can subscribe to.)

After hyperlocal news organization DNAinfo shut down in 2017, former editors created Block Club Chicago. It’s a hyperlocal online news organization focused on covering neighborhoods at the ground level. In doing so, Block Club builds community and creates an opportunity for residents to learn more about their immediate surroundings — not just the city at large.  With about 2.7 million residents, Chicago is a large city, and within it are over 70 community areas. Instead of assigning reporters topic beats, at Block Club reporters are assigned by neighborhood.

“I subscribe to Block Club because it helps keep me up to date on what is happening in, not just my neighborhood, but neighborhoods around the city. Each neighborhood has its own story, and its residents have their own unique assets, experiences and concerns. By reporting by neighborhood, Block Club is able to home in on those trends, build relationships with the community and cover topics relevant and important to residents.”

In addition to following Block Club’s site, it also has a newsletter for various parts of Chicago, which keeps readers up to date on what is happening in their area every day.

WBEZ is the flagship public radio station for the Chicago area. For people who might have a hard time reading a newspaper, whether that be due to the strain on their eyes or the affordability of print subscriptions, WBEZ is completely free and accessible. On top of their daily radio programming, WBEZ also hosts many podcasts, often affiliated with National Public Radio, that inform on history, culture, politics and much more.

“I’m constantly looking for more varied ways to take in my news, and WBEZ offered the perfect variation for me. I think that talk radio gets a bad name for being dry and boring, but I think it is actually just factual and to-the-point. WBEZ is a great news source for people who don’t have a lot of time to listen to the news—just 20 minutes on the train listening to Morning Edition, their morning radio show, can inform you on everything you need to know for the day.”

City Bureau is a nonprofit journalism newslab in Woodlawn. While they don’t produce daily, or even weekly content as we traditionally think of news organizations doing, City Bureau is constantly working with its community to produce reporting, programming and projects with an impact. They host a weekly Public Newsroom series for journalists and the community to come together (a series we collaborate with City Bureau to bring to DePaul). They help hold public officials accountable through their documenters program. And they host quarterly reporting fellowships to focus on larger projects, encouraging young and experienced journalists to reimagine how they do their work.

“City Bureau is constantly developing, testing and creating new ways of doing and thinking about journalism. Their work is careful, intentional and transparent. City Bureau is focused on working with their community to produce quality, in-depth reporting that is participatory. That’s what, I think, makes the organization so special and their projects so unique.”

South Side Weekly is a nonprofit news magazine that covers art, politics, community events and other public interest stories on the South Side of Chicago, as well as fiction, poetry, oral histories and artwork from local photographers and illustrators. The weekly is run by an all-volunteer staff and although news focuses on the South Side of the city, they seek contributions from across the city. Their coverage ranges from interviews with local activists to entire issues of local literature and Chicago-specific environmental topics.

“Spending so much time in and around DePaul’s campus and the North Side can start to skew your understanding of  the city and who actually lives here. The South Side Weekly does an amazing job of covering issues pertaining to areas that you might never go to as a North Side DePaul student and offers perspectives often uncovered by mainstream news outlets in the city, providing a comprehensive, thoughtful window into lives outside of our own.”

The state branch of this national nonprofit newsroom meticulously investigates morally important and often undercovered subjects with the goal of enacting change. And, like when they recently covered Illinois parents pretending to give up custody of children to cheapen their college tuition, they often succeed in inspiring lawmakers to meet and push to fix broken systems. The free and online publication collaborates with other local news outlets to reach specific audiences, publishes Spanish versions of stories, and engages and covers midstate and downstate communities. Their reporters stick out stories until the end, with ongoing series on subjects like Illinois’s play for video gambling and the disparities and debt of city parking tickets.

“Living in an urban center like Chicago that’s drastically more complex than where I grew up, I sometimes forget that I also live in the equally complex state of Illinois. Forgive me, Sufjan. I know I can turn to ProPublica for meaningful statewide coverage of issues that affect everyday people. As a reporter, I also appreciate their emphasis on transparency, data, and reader understanding, often shown through short explainer pieces connected to full investigations.”

Chicago has several colleges and universities with student-run publications which play an important role in reporting both student life and local news in the city. Many of these newspapers are important resources to use for news on local campuses and their surrounding neighborhoods. The Loyola Phoenix, for example, is a useful place to find news on Rogers Park, where its main campus is located. DePaul’s own DePaulia has broken several important stories on our school’s administration over the past few years and covers many of the happenings in the Loop, Lincoln Park and Lakeview. The University of Chicago’s Chicago Maroon is a key source of news for one of the most recognized universities in the world and also focuses on Hyde Park. Other local college newspapers include the Columbia Chronicle in the South Loop and The Daily Northwestern in Evanston.

“As students ourselves, it is great to read news from the perspective of other college students around the city, and if you’re doing a bit of research into specific places and events in Chicago, these newspapers are sure to pop up.”

If you’re looking for arts and culture…

The Chicago Reader is an alternative weekly newspaper in Chicago that was founded by a group of college friends in the 1970s. It’s known for its coverage of the arts and offering a wide array of cultural and political criticism. Aside from arts and culture, the Reader covers events and topics that may be overlooked by bigger outlets and publications. It also features comics and creative nonfiction. The paper is free and distributed on Thursdays via black-and-yellow street boxes or participating retail outlets. However, the Reader has a big digital presence as well.

“I regularly follow and stay up to date with the Chicago Reader because I think Chicago’s arts and culture scene deserves more nuance than it is often given. The Reader has given voices and platforms to organizations, artists and performers who have a harder time being represented in the mainstream media. I also believe they do a great job of working with diverse writers which, as a result, diversifies their coverage and gives readers fresh stories.”

Chicago’s art scene is expansive, making it easy to feel like you’re missing the less-covered art exhibitions and shows. Newcity brings all art to the surface with their coverage of everything from music to film to literature to visual arts, focusing on Chicago but covering national and international art news as well. Their coverage expands from specific features, like a feminist history of Chicago’s alternative art spaces, to general coverage, like a review of Ari Aster’s summer horror Midsommar. The publication began in 1986 as a weekly newspaper but transformed into print magazine/online publication/media company that even has a digital publication focusing on the visual art of Brazil. Their online content is released regularly and their free monthly-printed magazines can be found all over the city. Newcity provides an avenue for Chicagoans to learn about happenings outside of the forefront of the Chicago scene — a place for both new and more-established artists to flourish.

“Newcity is solely arts-related so it’s my go-to for figuring out what’s going on in the Chicago art scene. It’s easy to get caught in the same cycles of album or exhibition reviews, but Newcity provides a more localized scope of arts coverage.”

A daily morning roundup of all political and governmental happenings by Shia Kapos and Adrienne Hurst.

An evening newsletter from WBEZ’s Hunter Klauss that focuses on five of the day’s most important stories, from local to world news.

If you’re looking for pure data and facts…

A database from Reform for Illinois that tracks donations to political campaigns and committees.

Fact-checkers evaluate claims made by Illinois politicians and influential figures.

The city maintains a public online database with stats from city departments, including food inspections, traffic crashes and budgets and earnings.

While this isn’t a comprehensive list of where to find information in Chicago, it’s a small segment of the many sources for news Chicago has to offer.

Did we miss a reliable source you turn to for information? Let us know and we’ll add it to our Twitter list.