Climate Strike in Chicago: “It’s Your World That’s Gonna Come Apart, Not Mine.” 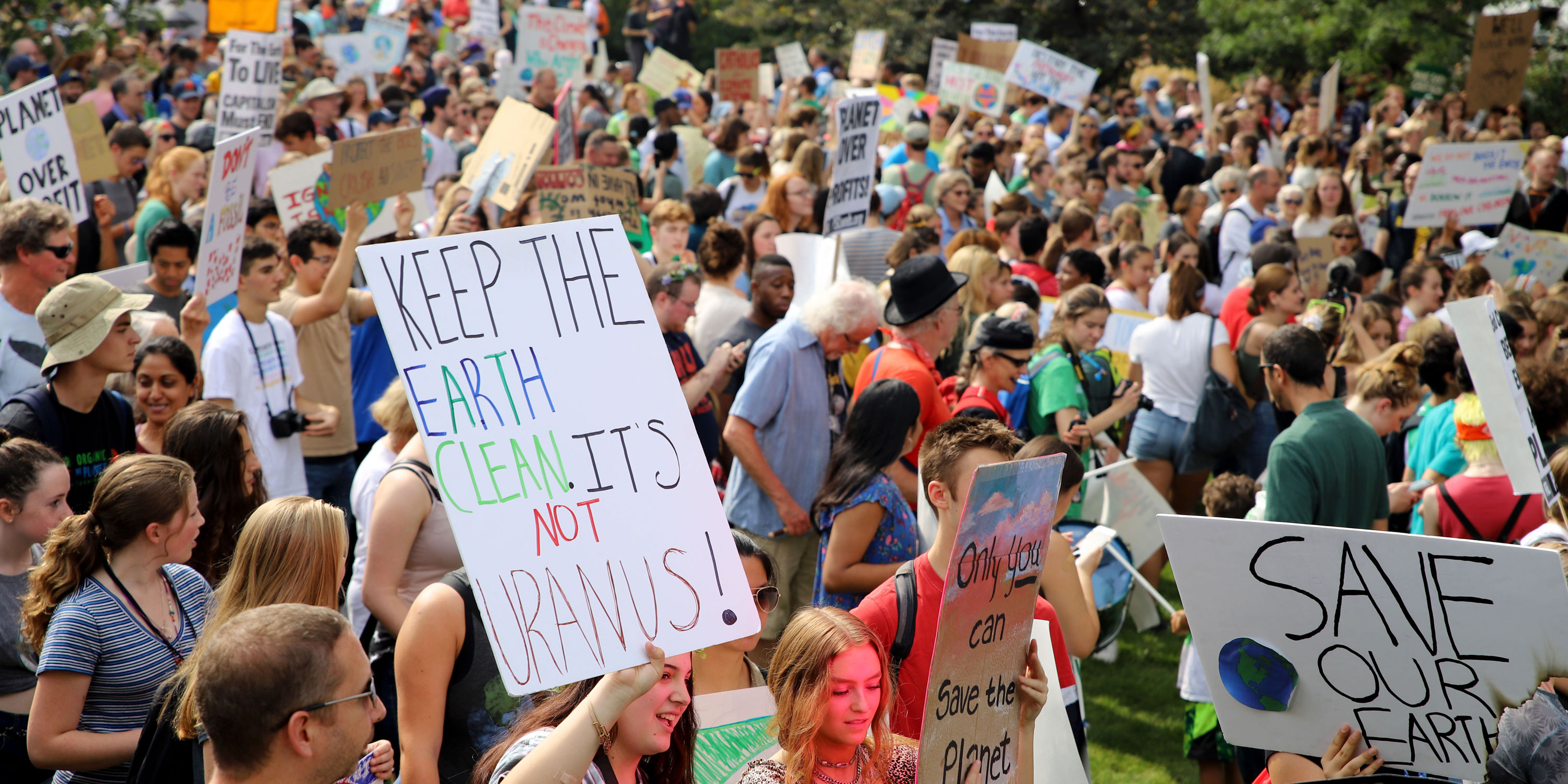 Heads began to emerge from the Jackson and Roosevelt “L” stops in clusters, a large percentage of the group made up of students. However, instead of dissipating into their libraries and lecture halls, the crowd began heading east – toward the lake. Bearing signs, carrying flowers and waving flags, a rally came together, championed by the 16-year-old Swedish activist Greta Thunberg.

The name Thunberg might be new to some, but for over a year she has been protesting politicians who do not prioritize the environment.

One year and one month apart pic.twitter.com/f2URDOVFm2

The group, #FridaysForFuture – founded by Thunberg – and the U.S. House Select Committee on the Climate Crisis helped organize and create awareness for the #ClimateStrike movement through popular social media platforms like Facebook, Instagram and Twitter.

Students in Chicago and cities across the world skipped school in protest to emphasize the gravity of the current climate crisis. “School children are required to attend school. But with the worsening Climate Destruction this goal of going to school begins to be pointless. Why study for a future, which may not be there? Why spend a lot of effort to become educated, when our governments are not listening to the educated?” states the #FridaysForFuture website. 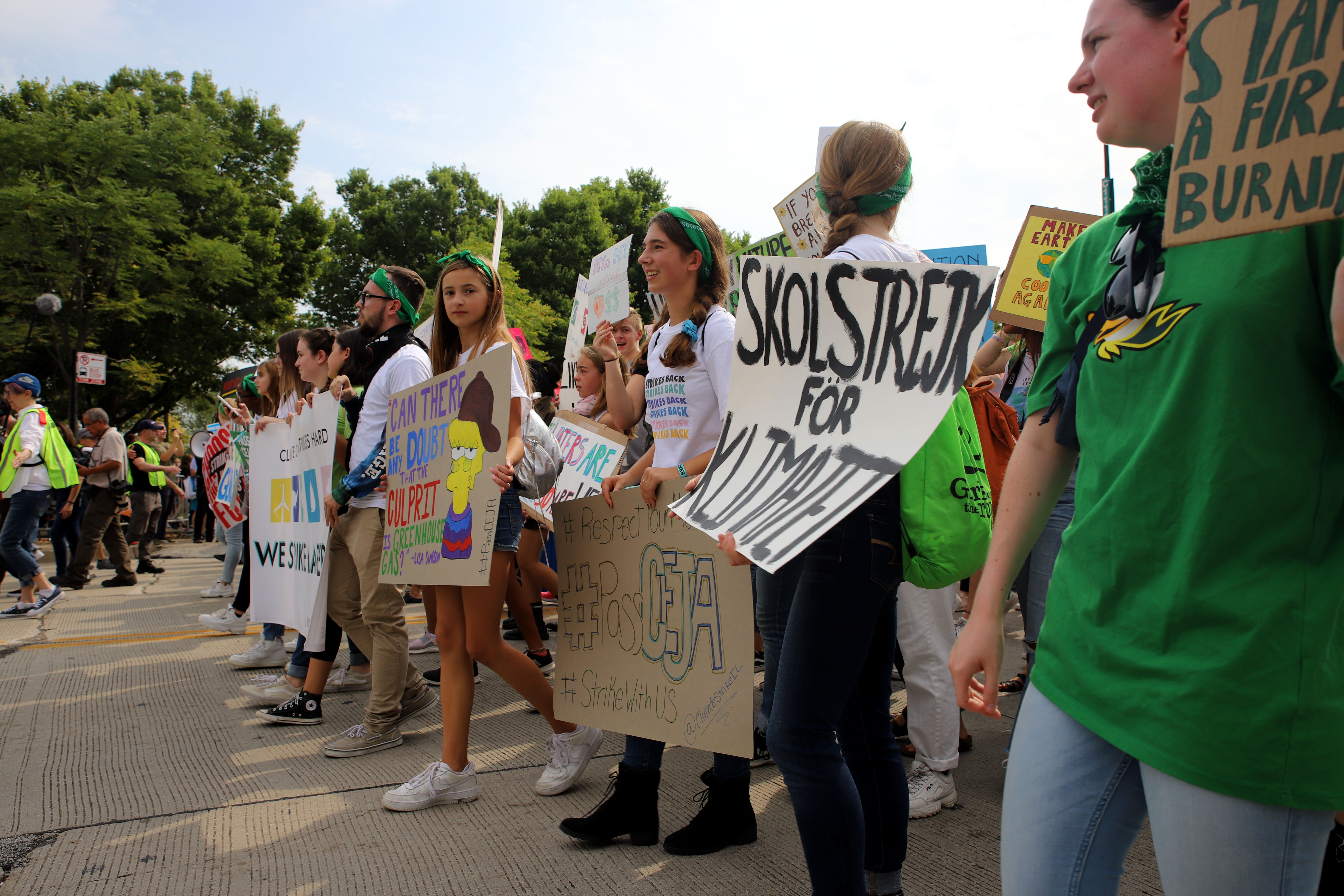 Similar echoes came from young children who were in attendance. “What’s the point of going to school if the Earth is broken?” said Talya, a fifth grade student at The Laboratory School, a private elementary and middle school, affiliated with the University of Chicago. This interesting word choice speaks to the hope that some of these young students have — the environment may be in danger but “broken” implies that it can be fixed.

There were many adults in the rally showing their support.

According to the movement’s website, over 3 million people participated in the Week for Future strikes across the globe on Friday, September 20, their largest organized strike to date. 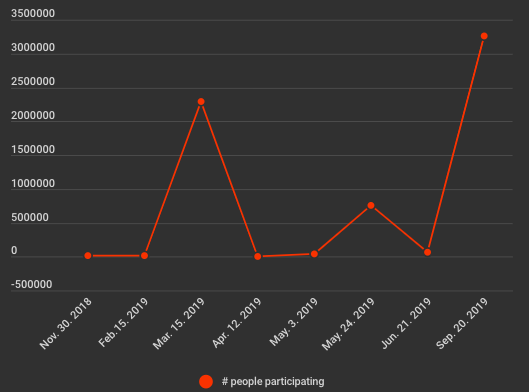 Infographic by Natalie Wade. According to activists: #FridayForFuture

In Chicago, the crowd congregated on the south end of Grant Park near the Museum Campus, in front of the Columbus statue. College students, high schoolers and toddlers escorted by their parents waved signs in the air that read phrases like, “act like adults, or we will,” and “it’s horrifying that we have to fight our own government to clean the environment.”

Through a megaphone, a woman called for the attention of the marchers, “If you feel like your rights are being invalidated, I need you to call the ACLU … contact an organizer, contact the marshal and we will take care of it … we want this to be a safe protest,” she said.

Minutes later the marching began and the mass of people traveled north along the lakefront, toward the Chicago Federal Building. 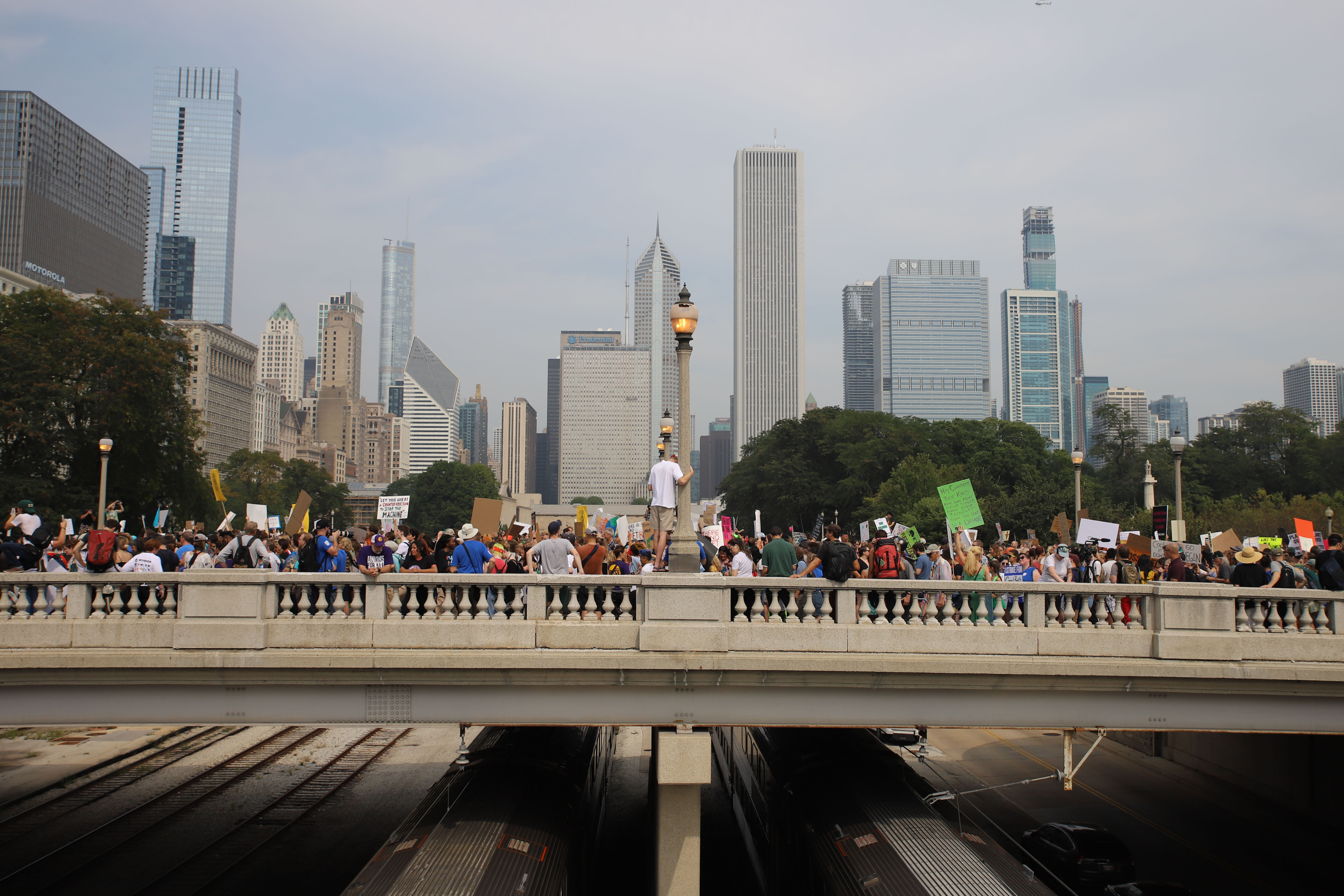 Chanting, “This is what democracy looks like,” and pleading for J.B. Pritzker to take action the group made its way to Federal Plaza. There speakers perched on top of benches to speak out on different overlapping climate, political and social issues.

One of those speakers was DePaul student Samantha Arechiga. She spoke for the Chicago chapter of the International Indigenous Youth Council (IIYC) on environmental racism at the rallying point on Federal Plaza. IIYC’s website says their organization was formed during the protest of the Dakota Access Pipeline in 2016 and is dedicated to preserving land, water and treaty rights, and protecting and preserving Indigenous culture and ceremonies among other goals. 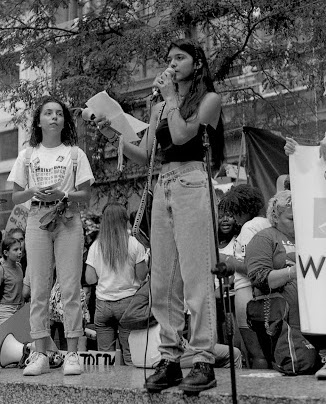 In an email interview with Arechiga, she said an example of environmental racism is when airplanes take routes that fly close to communities that have high populations of people of color. Pollution caused by planes can result in respiratory problems, such as a pregnant person giving birth to a child with asthma. Arechiga also gave the example of toxins in the air caused by manufacturing companies on the Southwest Side, such as petcoke and manganese, causing brain, lung and reproductive damage.

Arechiga said environmental racism is reinforced by borders from redlining. She said by comparing the borders drawn by redlining and the current levels of concentrated pollution throughout different neighborhoods of Chicago, a relationship is clearly seen. Communities of color in Chicago have disproportionately higher levels of toxic air pollution and other environmental health hazards.

Arechiga in her email said she felt the protest was “watered down.” She wished environmental racism was a bigger talking point in the conversation of climate change. She added she felt frustrated that the chants and goals of the protest were not going to solve bigger problems of capitalism and colonialism.

“Both (capitalism and colonialism) rely on each other, they rely on the erasure of Indigenous people, and they view the Earth and the land as a resource that can be exploited,” Arechiga said. A contemporary example of threats against Indigenous lands can be seen in the fire in the Amazon rainforest in Brazil and a proposed railroad in the Yucatan peninsula in Mexico that would cut through sacred land.

“The reason why we are hearing about it now is because only now is it beginning to affect white communities,” Arechiga said. She pointed out that people have been protecting their environment long before Greta Thunberg.

“Black and Indigenous people have been feeling the effects of climate change for decades… long before the media decided to market climate change as the next big thing through the face of a Swedish girl,” Arechiga said

On the Monday following the protest, Thunberg’s face was spread across all social media and news platforms once again. This time she was speaking in front of the UN Climate Action Summit.

“You have stolen my childhood and my dreams with your empty words,” she said to the delegates at the summit. Despite her best efforts, and the foreboding United Nations Climate Change report that urges the world to prevent the global temperature from rising 1.5 degrees, there’s been little promise of major change from the world’s leaders.